“Men In Black: International” is directed by F. Gary Gray (The Fate of the Furious, Friday) and stars Chris Hemsworth (Thor, Rush), Tessa Thompson (Thor: Ragnarok, Creed), Rebecca Ferguson (Mission: Impossible: Rogue Nation, The Girl On the Train), Kumail Nanjiani (The Big Sick, Silicon Valley), Rafe Spall (The Big Short, Life of Pi), Les Twins, Emma Thompson (Saving Mr. Banks, Love Actually), Liam Neeson (Non-Stop, Cold Pursuit), and Tim Blaney (Muppets Tonight, Guild Wars 2). This film is a spinoff that takes place in the popular “Men In Black” franchise, which would traditionally star Will Smith and Tommy Lee Jones, but this time, as you can assume by the recently mentioned word “spinoff,” the story is diverging away from its usual storytelling methods. Although Frank the Pug is back, which is awesome. This spinoff revolves around agents H and M (coincidence?) as they save the planet from alien-related attacks. 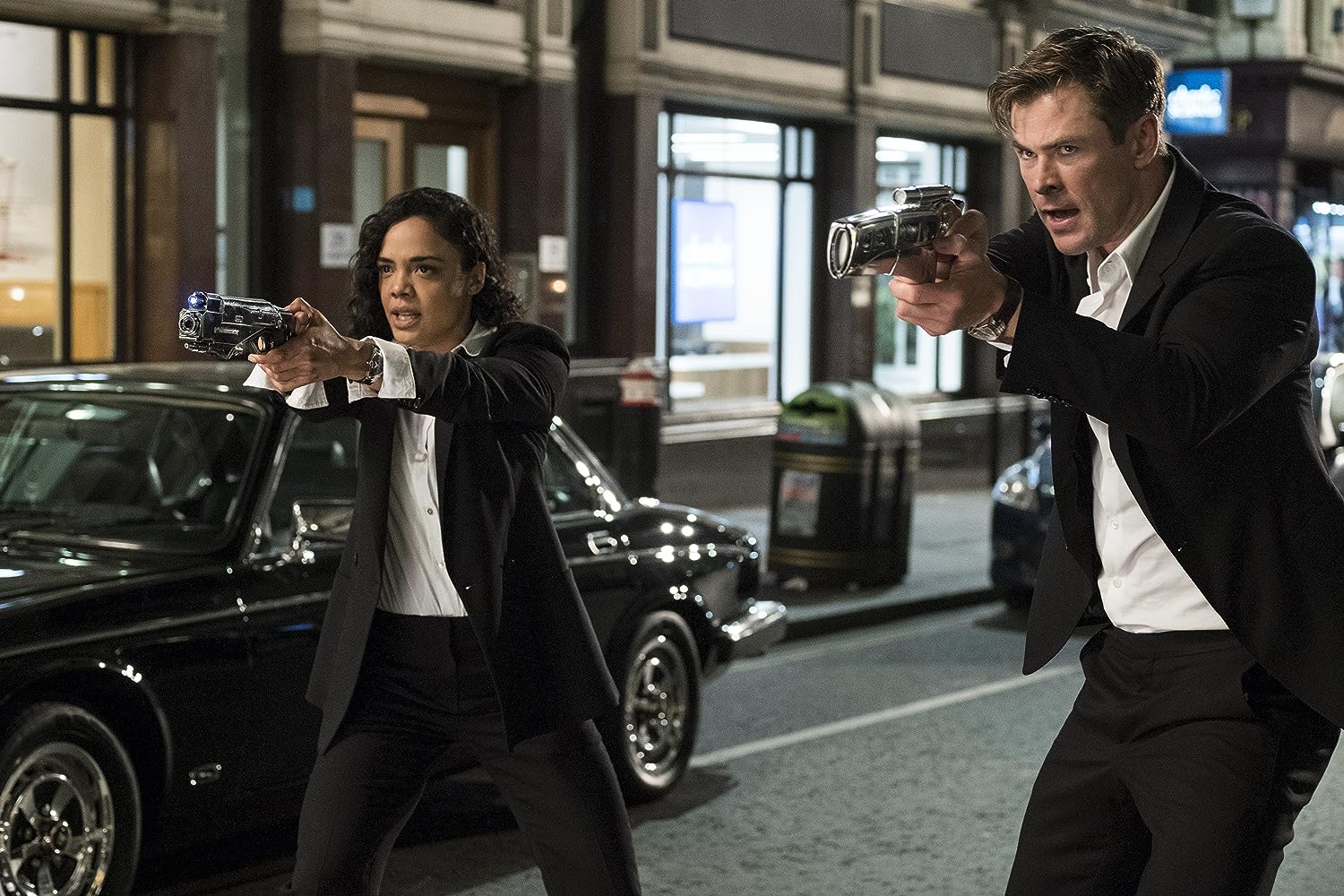 Going into this movie, I had my expectations set somewhere around the middle. I enjoy the “Men In Black” movies. I own the first one on DVD, and I have seen the second and third films as well. When it comes to the second film, I thought it was decent. Just another case of the sequel not surpassing the original, but still a good time. Surprisingly, probably not just for me, but this might surprise a lot of you, of Will Smith’s trilogy, my favorite of them all is “Men In Black 3.” There was one point where I would watch Starz all the time, and throughout the year of 2013, “Men In Black 3” was probably the thing I rewatched the most on that channel. I admired the film for its use of time travel, some of the dialogue, and the surprisingly emotional ending. When I first heard they were doing a “Men In Black” spinoff, I didn’t particularly know what to think. I also remember there once being an idea for a crossover between “21 Jump Street” and “Men In Black.” I have not seen “21 Jump Street,” so I can’t fully give my thoughts on how much sense this idea would make. However, despite my slight apprehensions, which I still had after witnessing the first trailer for “Men In Black: International,” I still went in with some hopes that this movie would be worthy of the franchise name. I will say though, the final trailer, is actually a pretty good piece of marketing. It got me a bit more interested in the movie than I was before.

So, how was the movie? It’s the best “Men In Black” spinoff ever!

It’s also the only one.

Seriously though, how was the movie? It was pretty good. If you ask me, I think “Men In Black: International” has all the ingredients for a cliche, but effective, summer blockbuster. Cool action, witty dialogue, charming characters, neat effects (for the most part), and some nifty concepts here and there. It’s good enough for you to go with a few friends and forget about reality for a couple hours, and then, I dunno, maybe catch on cable one day. And I say that with all seriousness, because it is probably the most “fun” I’ve had in a theater this year. It’s not the best movie of 2019. In fact, there are other “fun” movies that I saw that I would technically consider better than this, but if you if you ask me which movie made me grin like an idiot for most of the runtime in 2019, “Men In Black: International” is certainly a contender.

The “Men In Black” franchise has always seemed to have mastered the art of comedy, and “Men In Black: International” is no exception to this rule. Unfortunately, while Frank the Pug does make a brief appearance in this film, he’s not a critical character. But we do manage to get an equally as awesome comic relief character by the name of Pawny, played by the likable and talented Kumail Nanjiani. His backstory, which is explained during the film, made me care for him, and he had a number of gutbusting lines here and there. Speaking of gutbusters, Pawny’s charisma does suggest that all the other characters are less funny or less interesting, because Chris Hemsworth is the bomb. 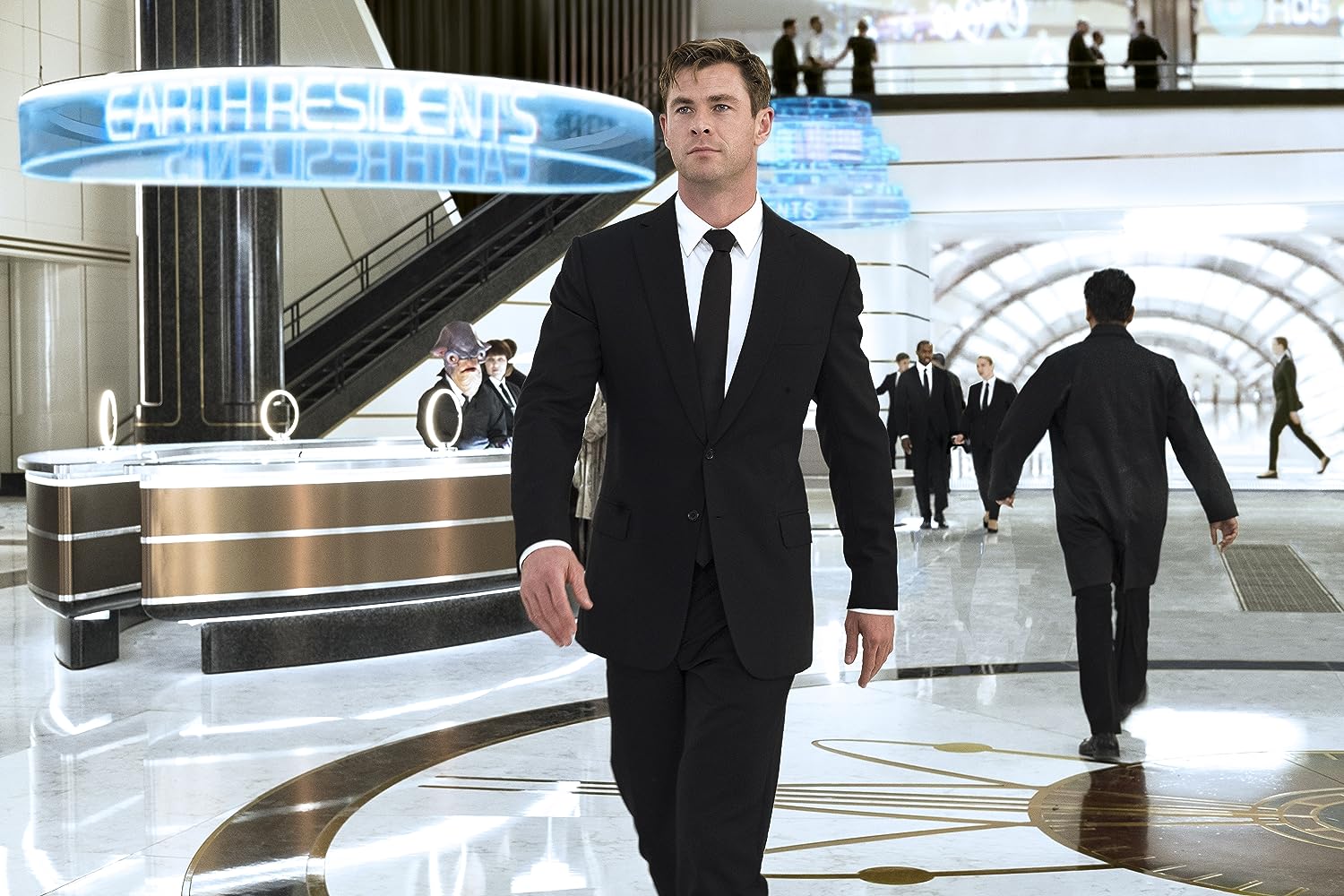 My respect for Chris Hemsworth has grown so much over the past few years, even though I hated “Ghostbusters,” even though “Thor: Ragnarok” was not what I wanted it to be, I still had respect for Chris Hemsworth because in general, he makes the idea of being charming the exact opposite of a chore. And when it comes to “Men In Black: International,” I think Hemsworth was one word: charismatic. He had fantastic lines, he truly feels like an expert in his field, maybe a bit of a goofy smart-ass who simultaneously takes his job seriously, and a guy who I would not mind having lunch with. Also, I mentioned the excellence of this film’s comedic elements, and I will certainly link an inside joke involving Hemsworth’s character. If you have ever heard of Marvel or Thor, there is a shot that will have you dying. Prepare for it if you ever see this movie.

Speaking of Hemsworth, I’d say he also had great chemistry with the film’s other lead, Tessa Thompson, but then again, that should not be too surprising since they have worked together before in multiple Marvel films, most notably “Thor: Ragnarok.” In fact, if I had to be honest, I think the duo’s chemistry here in “Men In Black: International” is better than it was in “Thor: Ragnarok,” because I feel the actors’ personalities meshed together when it comes to collective line delivery and interactions. I was able to buy into their partnership, and they worked together quite well.

I also really liked the big gun the marketing revealed at one point. If you remember the final trailer where our main characters test a gun in a desert, that makes for a couple highlights in the film. The gun does not get heavy usage, but it is probably the most admirable weapon in the film, which is saying a lot.

However, like most movies, “Men In Black: International” comes with its imperfections. Like a number of films I have seen recently, this movie suffers from some minor pacing issues, which almost made me lose interest in the story. Also, compared to a couple other “Men In Black” films, this installment feels a tad disposable. I’d watch it again, but I would not call it the holy grail of summer blockbusters. And as mentioned earlier in the post, a lot of the effects worked, but it doesn’t mean all of them did. When the movie started, I got a glimpse at a creature who was in front of young Agent M. It looked like something out of a B-rate “Avatar” film or perhaps live-action “Sonic the Hedgehog,” although, probably much more competent than that. It didn’t look revolting, but absolutely artificial. There was also almost no real threat. While various baddies appear throughout the film, it’s almost impossible to pinpoint the most threatening of them all, at least for a period of time, and it almost took me out of the movie. Another aspect I didn’t like is the Lexus product placement, but at the same time, compared to “Hitman: Agent 47” and that film’s relationship with Audi, I can tolerate Lexus in this film by MILES. Pun most certainly intended. Then again, this film had a decent amount of positives to which point, the negatives almost don’t even matter. I had enough fun with “Men In Black: International” that I felt in the zone. Do I want to see another story with Chris Hemsworth or Tessa Thompson? That’s still up for debate from my perspective, but I still managed to enjoy what I saw.

In the end, “Men In Black: International” had me smiling, laughing, and immersed. If there is one aspect of movies that I personally felt has improved since I first started Scene Before in 2016, it is comedy, and movies like “Men In Black: International” support that sentiment. Chris Hemsworth and Tessa Thompson make a good team, I enjoyed the humor, and it made me, surprisingly, appreciate a “Men In Black” story that didn’t have Will Smith in it. Although technically speaking, he does appear at one point, I won’t say how. Also, part of me may be wondering however if my positive, “smile on my face” thoughts related to this film, may be due to the collective atmosphere in the theater. Because just about everyone was laughing from one point to the next and the cinema was nearly full. Then again, I saw “Guardians of the Galaxy Vol. 2” in a full cinema where everyone was laughing and I hated that piece of crap. Part of me wonders if my thoughts as of now, are simply fueled by what the collective vibe must have been. Maybe if I watch the film again, said thoughts could end up changing. But I don’t care, because I’m going to give “Men In Black: International” a 7/10. Thanks for reading this review! I just want to let everyone know that I just recently reached my 300 post mark on Scene Before, so if you want to check it out, click this link! The post involves me going over my complete Blu-ray collection, which features a video I uploaded to YouTube, partially because WordPress would not let me upload it directly. Be sure to follow Scene Before either with an email or WordPress account so you can stay tuned for more great content! I want to know, did you see “Men In Black: International?” What did you think about it? Or, what is your favorite “Men In Black” movie? Let me know down below! Scene Before is your click to the flicks!