“Replicas” is directed by Jeffery Nachmanoff (Legends, Traitor) and stars Keanu Reeves (The Matrix, Point Break), Alice Eve (Star Trek: Into Darkness, Iron Fist), Thomas Middleditch (Silicon Valley, Captain Underpants: The First Epic Movie), and John Ortiz (Kong: Skull Island, Silver Linings Playbook). This film is about a man who works for a scientific organization and despite some downs here and there, his life is good. That is until he gets into a traffic accident alongside his family. He’s the only one in the car to survive. From this moment, his primary focus is on resurrecting said family through means of science.

Keanu Reeves is one of the best actors working today. He is one of those actors who has allowed me to change my perception towards them in regards to range and talent. I am not saying I hated Keanu Reeves back in the day or anything, but having seen him in “The Matrix,” it was almost hard for me to think of Keanu as anyone else but Neo for a period of time. An occasionally emotionless being who might as well be the heroic equivalent of an Amazon Echo.

Then I saw him in “John Wick,” and holy hell that was sick! And at this point, in 2019, I feel like not just myself, but the world, is having Keanu fever. Keanu… Reever? Keanu Feever? Whatever. The point is, Keanu Reeves is arguably more popular and hip than he’s ever been. If you told me back in the day that Keanu Reeves could make another popular trilogy after “The Matrix,” I’d laugh in your face, call you a dirty rotten liar, and steal your most valuable possessions at night. 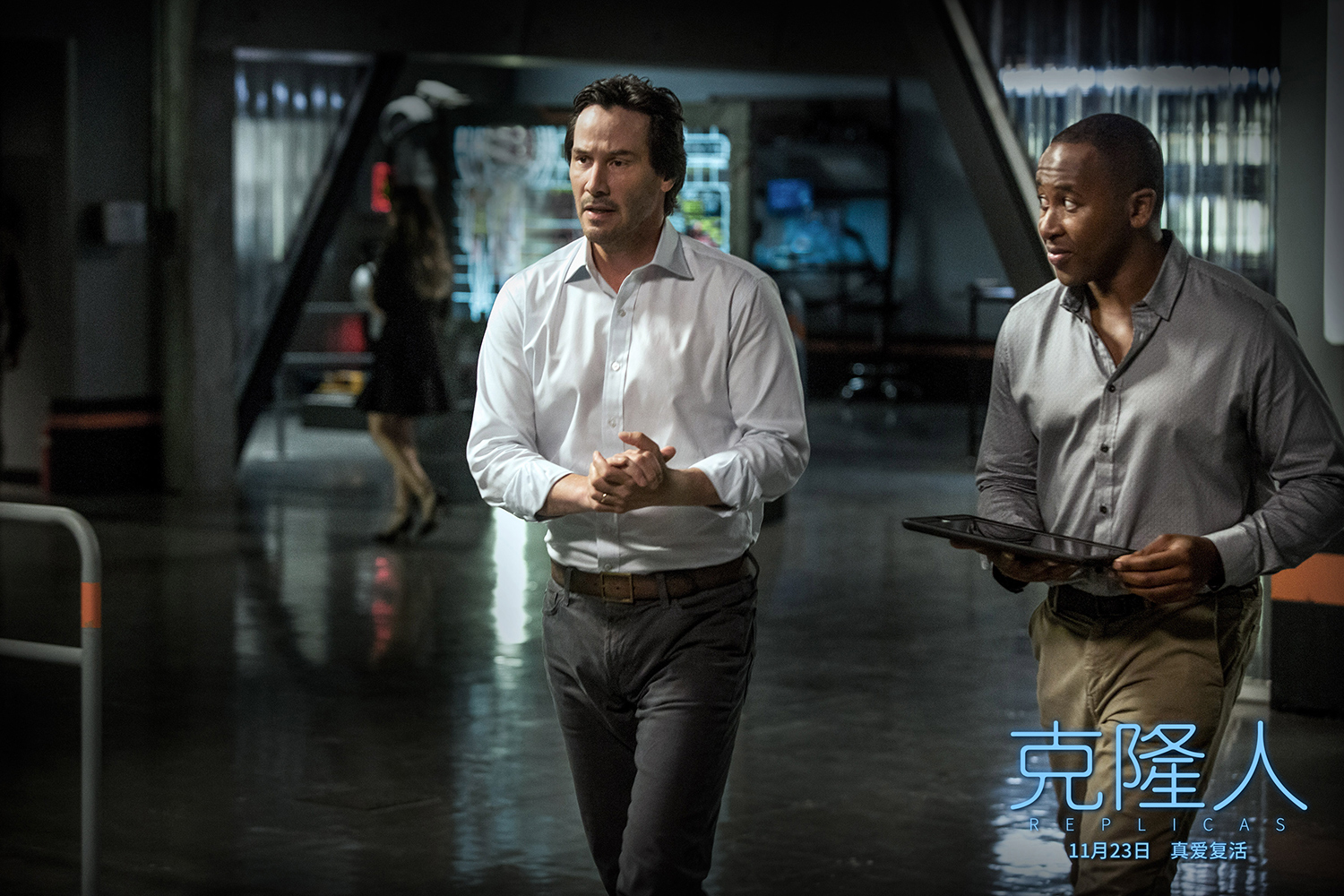 But today, we are not talking about “John Wick,” partially because I just saw the third movie and reviewed it about a month ago, and the fact that I purchased a Blu-ray from Best Buy of a movie that I for one am well aware, did not get good reviews. But for the sake of reviewing more relevant movies (as in, ones that recently came out) on this blog, I figured I’d buy it and watch it. And unfortunately, it is just about as bad as I heard. Like, what the f*ck?! Why did Keanu Reeves do this? Did he lose a bet or something? Granted, all of the actors in this movie, at least from my perspective, did well with what lackluster material was provided. But this movie felt like it should have gone straight to Syfy or something. I have a feeling that the studio behind “Replicas,” probably would have wanted to put this out on DVD or something, maybe sell the rights to Netflix. But they had Keanu Reeves, who as suggested, is probably a bigger phenomenon right now than the “Baby Shark” song. Maybe Alice Eve had something to do with it, but yeeeaah… Keanu Reeves is the bomb right now. 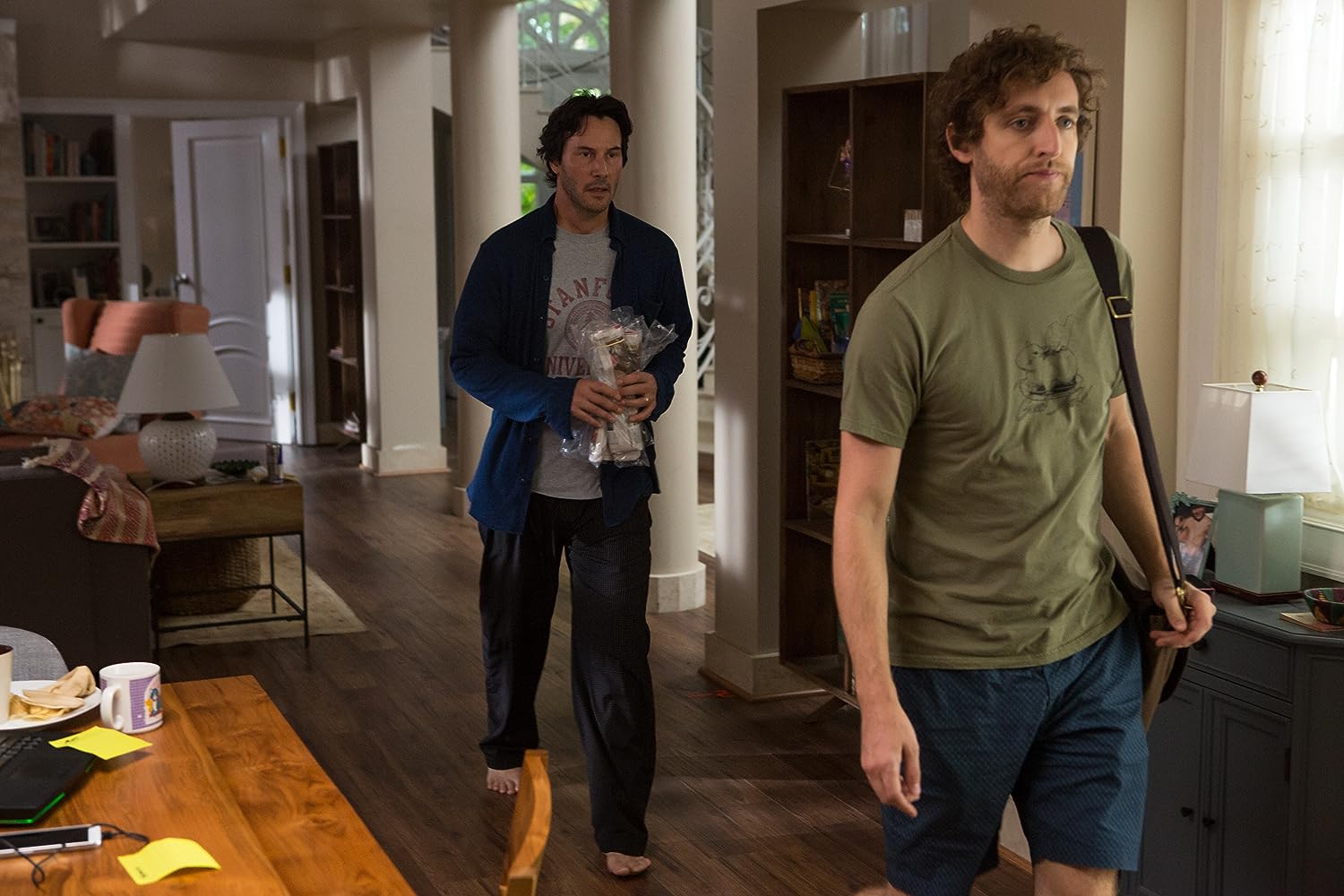 And sadly, the movie WASTES him! When he’s at work, he’s this serious guy who is insanely focused and has a bond with Thomas Middleditch. In fact, this is shown during one of the first scenes where Keanu is testing out a robot. And when it comes to this robot, he kind of represents the upright position of a homo-sapien, which isn’t a bad design. Granted, some of it looks cliche, maybe a little boring, but it’s at most, serviceable. Although at the same time, maybe even that is a little too generous! Partially because I then saw this robot move, it did not look real! I did not buy it! When it’s trying to gain control, it felt like the movie was losing frames. Movies are traditionally shot in 24 frames per second, when this robot moved, it felt like 12. What is this? Is this a movie? Or is it an online video game on a slightly tolerable PC?

In fact, that’s not all! Keanu has to figure out a way to revive his family, without getting into certain major consequences. This leads to an enormously off-putting scene where we have to watch him impersonate his family and make up lies. He tells the school his children go to that the kids are now being home-schooled, he’s texting with his daughters’ friends, some of these things just feel like they could work on an “SNL” sketch if the vibe was appropriate, but in a movie that I guess I’m supposed to take somewhat seriously, it just didn’t work for me. I could tell that Keanu really loves his family in this film, but holy crap, some of the things he does is just out of left field.

In fact, as a story, the concept could have potential, but at times it felt awkward, maddening, and sadly, BOOORING. I’d rather watch a YouTube video of some guy in a hotel counting all of the bedbugs in all of the guestrooms! You’ve got uninteresting characters, barely passable pacing, moments that make me as a viewer angry, and a cliche corporate guy who loves money.

It’s really sad how generic some of things in this movie happen to be. Sure, the story is kind of an interesting concept, but you’ve got a standard looking robot that does not come off as great, you’ve got the definition of a “suburban family,” and a lot of the dialogue feels bland and wooden. The testing in this movie kind of reminded me of “Fant4stic” from 2015, BUT WORSE! Granted, I wouldn’t say “Fant4stic” is AS bad as other people say, in my opinion, but knowing some things about this movie and that movie, that is a good comparison. You’ve got your randomly placed together characters, cliche writing, and a couple moments that made me as an audience member feel dumber.

In fact, there is a point where this movie’s “main plot” if you can call it that, gets into full swing, and I think the only interesting thing that happened is when Keanu is with his kids. It’s a warm morning and the kids at one point want one particular breakfast portion and once they’re finished with that, they want another decent breakfast portion. That’s kind of fun and quirky, give me more of that! But no, this movie wants to be boring, and as I write this review, I’m almost having trouble figuring out what to say. Out of all the characters in this movie, barely any of them have a personality. As for those who do have a personality, they are either less than fascinating or ordinary. I think a ragdoll from “Garry’s Mod,” simply lying on the ground on a map could potentially be more compelling of a character than some of these people! 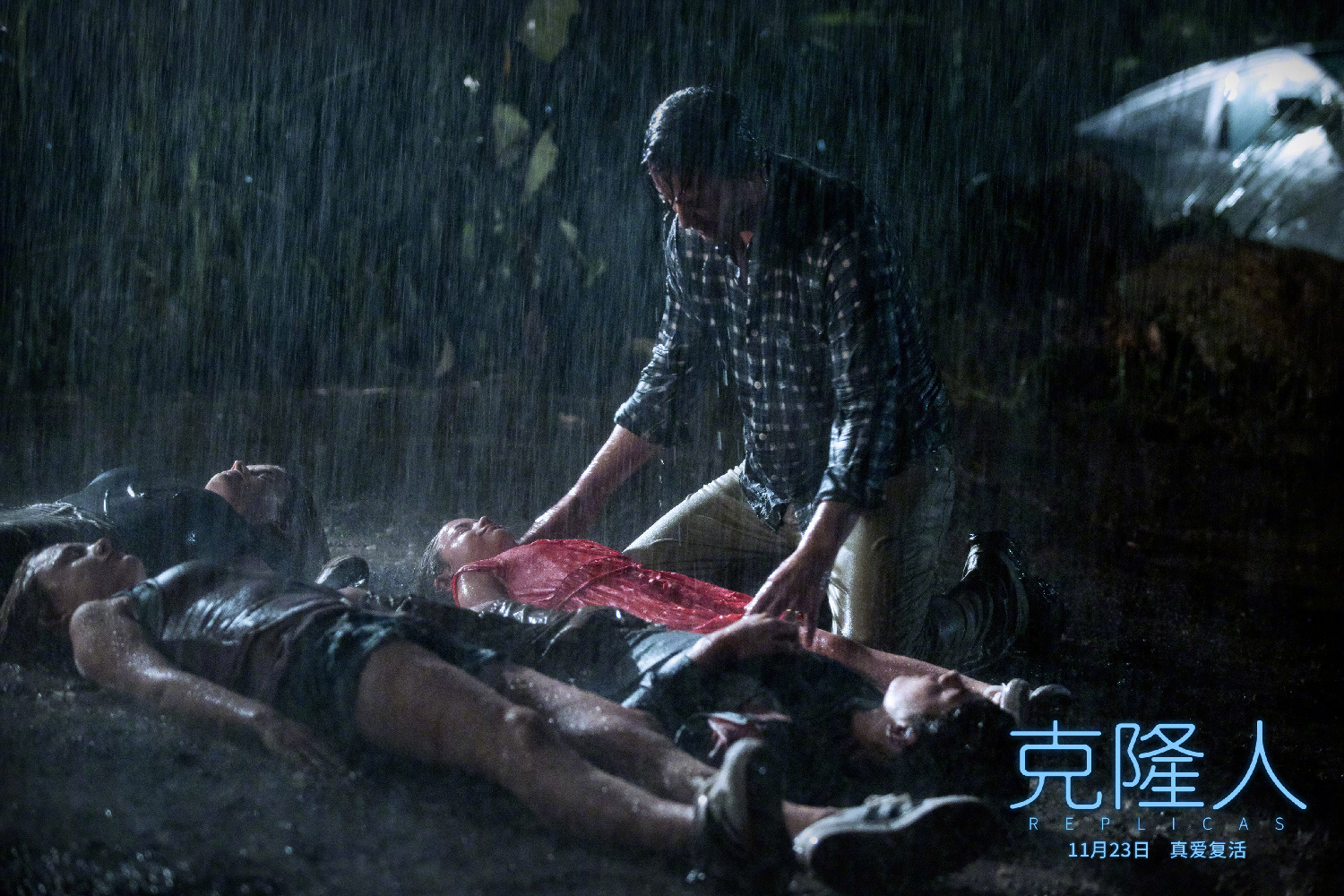 Does the movie know what it wants it be? Probably so. It probably wanted to be this compelling sci-fi flick that could show the power of family and connections. That’s probably what I wanted it to be. But it was nothing except garbage to me, just the honest truth! When the climax arrived, I practically checked out. I didn’t care what would happen to anyone! Everyone could die and I wouldn’t care! The world could mutate or something and everybody would turn into banana splits! I wouldn’t give a damn! For all I know we get a plot twist that the big corporate dude from the beginning of the movie was Jesus Christ in disguise! Why should I even pay attention?! It doesn’t matter! Just let the movie end! 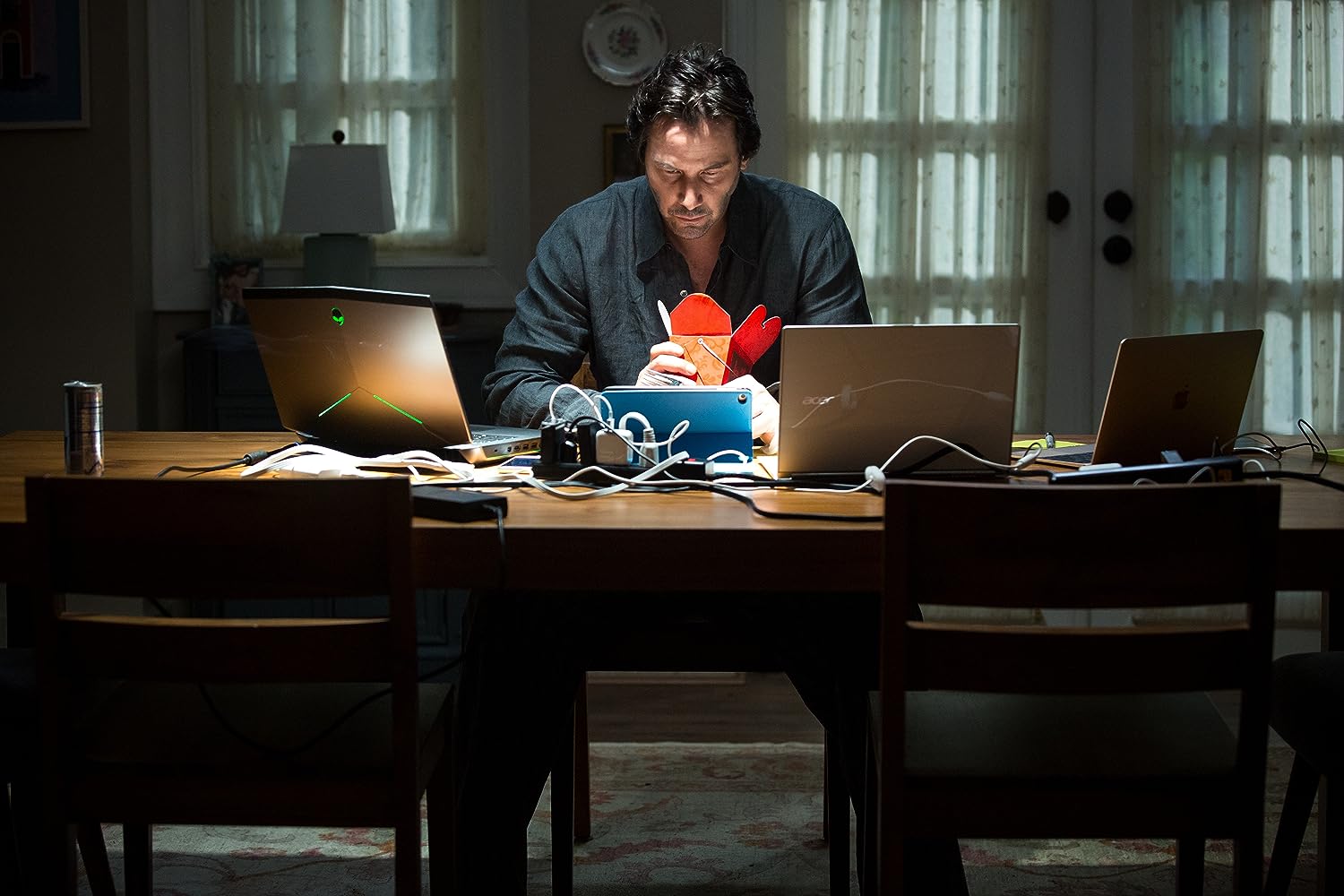 In the end, “Replicas,” which came out in theaters, feels like a carbon copy of a flick that went straight to Syfy. Keanu Reeves, seriously! Are you poor? If you are, I apologize, I’ll send you a Nintendo Switch to keep you entertained, I’ll bring some food, and I’ll organize a GoFundMe page! But why did anyone agree to do this movie? All the actors must have been “Alright, *double clap* paycheck time.” Because this movie is not just the epitome of bad sci-fi, but also a January movie. It bombed at the box office, and it did so for good reason! If you want a good Keanu Reeves movie from this year, go see “John Wick: Chapter 3 – Parabellum.” I’m just glad I could actually say that since I waited until June to check this film out. But no matter what month you check “Replicas” out, you will wish you could die. Given how I would be fine going through the rest of my life not watching this movie again, and finding perhaps one or two minor positives overall, I am gonna give “Replicas” a 1/10. Thanks for reading this review! I just want to let everyone know that this upcoming weekend is the opening for “Toy Story 4.” I don’t know if I’ll be catching it this weekend, but it is on my to do list for sure. “Toy Story” is one of the best animated franchises out there, and even though I have been petrified for a long time on the thought of “Toy Story 4,” I kind of want to see it the more I hear about it. I don’t have my tickets yet, but I want to get them as soon as possible, so we’ll see what happens. Be sure to follow Scene Before either with an email or WordPress account so you can stay tuned for more great content! I want to know, did you see “Replicas?” What did you think about it? Or, what is your least favorite Keanu Reeves film? I have not seen em’ all, so I cannot really say “Johnny Mnemonic.” This one is certainly a contender for me. My gosh, my brain cells are literally exiting my body! Scene Before is your click to the flicks!