“Rocketman” is directed by Dexter Fletcher (Eddie the Eagle, Bohemian Rhapsody) and stars Taron Egerton (Kingsman: The Secret Service, Sing), Jamie Bell (Fantastic Four, Jumper), Richard Madden (Game of Thrones, Bodyguard), and Bryce Dallas Howard (Spider-Man 3, Jurassic World). This film is based on a portion of the life of music icon Elton John. It goes over his origins as an artist, as a person, and as someone who eventually must overcome various personal weaknesses or quirks.

I don’t know much about Elton John as an artist, and he’s not the first musician I go to when I need some music to soothe the mood. It’s not to say I hate him, but unlike other artists including AC/DC or Metallica, I just don’t think to myself, “Oh yeah, Elton John! I’ll leave myself on this station for him!” However, going into this movie, I did have some expectations. One of them, specifically the least important expectation, is that it would be better than “Godzilla: King of the Monsters.” Why? Because “Rocketman” came out the same weekend as that movie, I already saw “King of the Monsters,” and now I unfortunately can’t unsee it. As for other expectations, I did think that “Rocketman” would be rather fun and maybe not as much a downer type of film compared to other music-related biopics. For one thing as an example, unlike the main character of last year’s “Bohemian Rhapsody,” Freddie Mercury, Elton John is still alive. It’s not like we’re going to see a movie and feel like it is asking the audience, “Oh, remember him?” I’m not saying I’m bored of the whole “memory” thing, if you remember the movie “Ray,” I thought that was one of the best movies of the 2000’s and it showcased some serious downs of Ray Charles’ life. Even with that being said, I was still expecting this movie to go in a slightly different direction. “Rocketman” from the trailers looked vibrant, immersive, while at the same time, a true escape from reality. After all, one of the movie’s taglines is “Based on a true fantasy.” And I certainly did get a true escape from reality, almost a little too much. “Rocketman” is based on true events, and I know a lot of movies don’t have every detail of accuracy when it comes to basing them on reality. But “Rocketman” went into a direction that I for one did not see coming. The Wikipedia page for “Rocketman” describes the flick as a “biographical musical film.” I was expecting “biographical,” but not “musical.” In fact, this movie’s early attempts at being a musical kind of felt forced. It did become slightly more acceptable and a tad less cringeworthy as time passed, but due to my limited research on the film prior to seeing it, not to mention having certain expectations, this kind of came off as a surprise.

To put this in a short amount of words, if you went into “Rocketman” thinking you’re going to get a glimpse of what happened during Elton John’s life, I must point out that you are in fact going to get that. But it is all surrounded by tons of musical numbers, some of which kind of felt admittedly cringeworthy at first. It almost made me think I accidentally bought tickets for a Disney flick or something! Although that would be kind of amazing because this is rated R. And as the movie went on, the numbers actually almost became the biggest highlight. After all, while I am not a musical guy, one thing I can appreciate about certain musicals is the spectacle, which at times, this movie truly does have. It pulls you into the lively, flashy concerts, and takes an idea that I usually think would not fit in a biopic, but somehow the crew would manage to make it all work.

Also, Taron Egerton as Elton John? Hell yeah. I bought it completely. Definitely one of the best performances of the year so far. But it’s not even summer yet so I cannot confirm or speculate how many awards he’s going to win. And I have a feeling that part of why Egerton may have encapsulated the essential elements of Elton John is because the two have previously interacted with each other. If you remember 2017’s “Kingsman: The Golden Circle,” which to me was a fun, but slightly disposable action flick, Taron Egerton plays the main character. During that film, Elton John made an appearance as himself.

Does Egerton have a shot at an Oscar from here? I dunno, we’ve still got time to wonder. But much like Bradley Cooper in “A Star Is Born” from 2018, one of the biggest praises I can give to Taron Egerton is that he does his own singing. I never saw Taron Egerton as a singer, and the fact that he even made the effort to sing on his own is magnificent. Big thumbs up from me!

I also admire the direction that this film tends to go, because the way it starts off, it’s almost glamorous, almost as if I went to see a movie that takes place in a cinematic universe where all the contestants from “RuPaul’s Drag Race” team up to fight crime. Then without going into spoilers, it turns out to be… well, not that. I mentioned that this movie isn’t really the most “downer-like” of biopics, but some serious stuff manages to happen in one overarching part of the story, not to mention other parts of the film. I’m not saying the film is having trouble knowing what it wants to be, in fact, I think the tone in its entirety works for a movie like “Rocketman.” It’s big, it’s exciting, but also at the same time, slightly grounded in some sort of reality here and there. I guess I am not that surprised to see an Elton John film. A lot of famous people will get their own movie if their story can be told while being interesting and profitable. But what I am somewhat surprised by is the fashion in which we managed to get a movie like this. Because for those of you who don’t know, Elton John himself has an executive producer credit for this film. While he didn’t direct or write the film himself, this almost must have been a glimpse back, not just for the audience, but for Elton John more than anyone else. I have seen some of the film’s marketing, but I can’t say I knew everything about it going in, so let me just say, consider my last statement and see how this movie is presented. Trust me.

And I do mean this, “Rocketman” has the flair of Elton John himself, whilst presenting some peaks and valleys from his youth. He had trouble living with his parents, not to mention getting care from both of his parents, especially his father, who is nothing short of a jerkface with an extreme lack of tact.

One last thing, I also really like some of the scenes where Elton John has to present himself and his musical talent to executives. I thought those were some of the better parts of the movie and there’s one scene where an executive just keeps criticizing every music-related choice Elton John is making. It’s kind chuckle-worthy, maybe even funnier than that.

In the end, “Rocketman” is not the best movie of the year, but it probably qualifies as the most interesting. It’s quirky, it has spectacular direction, and a stellar performance by Taron Egerton. It’s no wonder that Egerton likely had John’s blessing, and if they make another movie together, whether it is another “Kingsman” or something completely different, sign me up! I will say however, to me, this is probably going to be a movie that does not have much replay value. A lot of the movie’s standout scenes, at least to me, may make for good YouTube clips, but unless I needed something to watch on a big 4K TV, I probably wouldn’t go straight back to watching “Rocketman” this instant. It’s kind of a one-off, but it’s a good one-off. I’m going to give “Rocketman” a 7/10.

But before we go any further, I do have to bring one thing up, I went to see this movie with my mother and sister, and as far as I know, this is probably the most anticipated my mother in particular has ever been for a film. And she had a ball watching it. In fact, she brought up something I would have never expected to have ever heard from her. She mentioned the movie “brought her back to her childhood.” I don’t talk about my family life much on here, but this came off as a shock to me because my mother, at least when I’m in the room, NEVER gets nostalgic over anything. And out of all the nostalgia bombs arriving in theaters today, there are few, if any, that ever brought my mother back to her youth. I think only exception in my entire life when it comes to this sort of thing would have be 2015’s  “Pixels” because it inspired my mother to play an 80’s playlist. I’m just glad that in this postmodern era of media, it’s not just people like myself who obsess over “Star Wars” or “The Incredibles” can return to the days of being a kid. Even my own mom, who to my knowledge, never tends to go back in time, just experienced time travel. 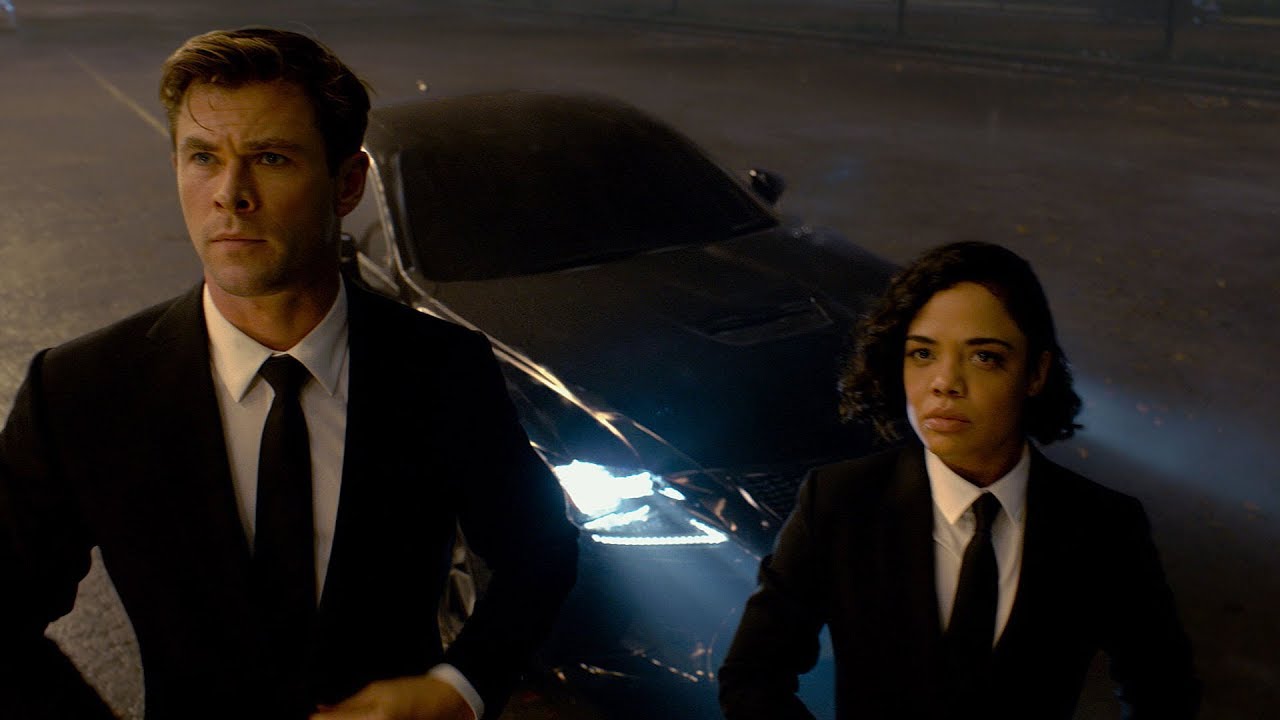 Thanks for reading this review! I just want to let everyone know that I scored a couple of passes to go see “Men In Black: International” next week, which is the first spinoff in the popular “Men In Black” film franchise starring Chris Hemsworth and Tessa Thompson, who coincidentally, worked closely together in “Thor: Ragnarok.” I also want to remind you all that if you have not checked it out already, I recently released my 300th post on Scene Before, which is a glance at my Blu-ray collection. It features a YouTube video going over every single solitary copy I own including special editions like 4K, 3D, Steelbook, etc. To view the post, click the link right here! Be sure to follow Scene Before either with an email or WordPress account so you can stay tuned for more great content! I want to know, did you see “Rocketman?” What did you think about it? Or, what is your favorite song by Elton John? Let me know down below! Scene Before is your click to the flicks!