Hey everyone, Jack Drees here! If you have been looking at the movies that have come out during the year of 2016, you may have come across one titled “Bad Moms.” I actually saw that in the theater, enjoyed it for what it was, but considering the audience that was there, I clearly wasn’t the target demographic, the amount of times I laughed were much fewer than the majority of attendees, and I clearly don’t laugh at swear words as much as other people. Maybe I’ve watched too many movies with foul language to know what I’m getting into. I’m not saying that other people are stupid for liking this film, we all have our personal tastes. Although then again I’m kinda pissed it made more than “Kubo and the Two Strings.” Sure it’s an animation so I imagine some people might not like the idea, but MY GOSH that was a masterpiece. At least we have “Sausage Party.” Right? Anyway, “Bad Moms” was relatively successful when it came out. It never hit the #1 spot on any of its weekends in theaters, although to be fair it was competing against movies like “Jason Bourne,” “Star Trek: Beyond,” and “Suicide Squad.” So at some point, a sequel goes into production. What’s the difference this time around? Well, it’s a Christmas movie.

For those who want to know the cast of the upcoming “Bad Moms” sequel, the movie will star Mila Kunis (Family Guy, Black Swan), Kristen Bell (The Good Place, Frozen), Kathryn Hahn (I Love Dick, Tomorrowland), Cheryl Hines (Curb Your Enthusiasm, Son of Zorn), Christine Baranski (The Good Wife, The Big Bang Theory), and Susan Sarandon (James and the Giant Peach, Thelma & Louise). The movie is basically a follow-up revolving around the characters played by Mila Kunis, Kristen Bell, and Kathryn Hahn as they try to rebel against the expectations laid upon them concerning Christmas. 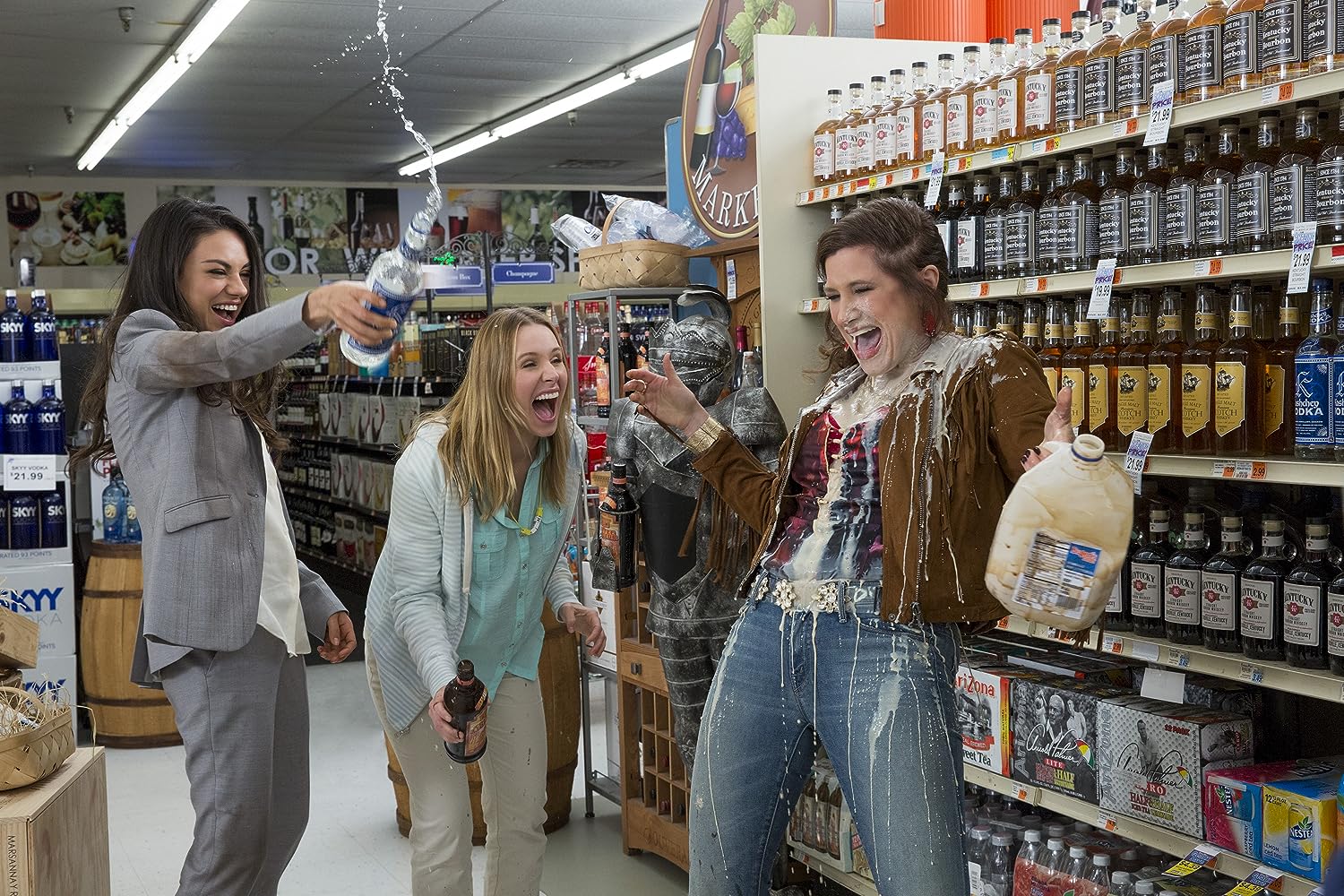 Now, on paper, I wasn’t thrilled that this was happening. Sure, I enjoyed the first movie, but it’s not even that great. Plus, the more I think about it, I may have just been in a particular mood that day and I was trying to put my mind in another person’s shoes. I’m not a mother, nor am I a girl. I’m a teenage boy, there’s not many people I PERSONALLY can relate to when watching this movie. Then again this is why they make different movies for different people. This is why they make “Sharknado” and its sequels for stupid people. I’m not saying only stupid people enjoy “Sharknado” but keep in mind their movies are OBJECTIVELY DUMB. So what did I do to verify my interest or lack of interest in this movie? I watched the trailer. I didn’t laugh once, but then again, I go to the movies and see funny trailers which nobody laughs at. Although consider this, usually when there’s a trailer for a comedy, all the funny parts are shown in the trailer.

Let’s also consider the fact that this is a Christmas movie. What was the first movie? It was it’s own thing! There was no particular holiday on the rise, it was just a simple movie. Sure, Christmas might be a less than pleasant holiday for a number of mothers, but at the same time, I don’t see a Christmas theme fitting in the “Bad Moms” universe. If “Bad Moms” had a sequel that focused less on the Christmas theme, maybe someone has a birthday, maybe a number of children have birthdays coming up, something like that, a situation such as that might work out. In fact, you don’t even have to eliminate Christmas entirely, maybe you can make it subtle and not have all of this holiday theme strip club s*it. Besides, there are movies which happen to be sequels that take place during Christmas time that I enjoy despite the previous movies having no relation to that holiday. Just look at “Iron Man 3!” By the way, that movie was released in May, so that’s saying something.

Now there is another movie that’s actually coming out the week after this one comes out, which is “Daddy’s Home 2.” That movie is also going to have a Christmas theme, and a similar layout in terms of plot. “A Bad Moms Christmas” is going to have the mothers of the main characters coming for Christmas and “Daddy’s Home 2” is going to have the fathers of the main characters coming for Christmas. I saw both the original “Daddy’s Home” and “Bad Moms” movies, but if you had to ask me which was better as a movie, I’d say it would be “Bad Moms.” I’d honestly rather watch “Daddy’s Home” the more I think about it, but I found more things wrong with it and part of the illogical humor got into my head that it made me nearly frustrated. Plus I also found something that bothered me with the whole cones thing in the movie. I feel like “Daddy’s Home 2’s” Christmas theme is a little more appropriate for the film partially considering the last one came out in December and mainly considering that part of the last one took place on Christmas Day.

Another thing I had in the back of my mind is the wonder of repetition we’ll be seeing in this sequel. This may be judging a book by its cover, just like how watching a trailer might be judging a book by its cover, but just check out the posters. The poster for the original movie said “Party like a mother.” That slogan is also on the Blu-ray and DVD for the film. On the poster for this new movie, the slogan is “Celebrate the holidays like a mother.” Comedies and sequels can get some slack for repetition in full-length movies, but I don’t usually recall seeing repetition like this on many posters!

If you ask me, if I were making executive decisions, I’d say “A Bad Moms Christmas” sounds more like a straight to TV or straight to DVD film as opposed to a theatrical film. The first movie may have been fit for theaters, but this just feels out of place. I feel like the fact that it’s a sequel to a previous successful movie and the people starring in it are at least two reasons why this is getting a theatrical release. Moms will go see it, girls who want to see men without clothes on will go see it, heck, part of me even thinks teenage boys might even want to see this. Just think about it, Mila Kunis is the star of the movie!

On a little sidenote, a hint of dialogue was uttered in the trailer that caught my attention. Mila Kunis’s character is communicating with her mother, played by Cheryl Hines, and Mila Kunis tells Cheryl Hines that she just wanted to enjoy Christmas this year. Cheryl Hines replies saying “You are a mom. Moms don’t enjoy Christmas they give joy.” I understand what she meant there, but let me just have you know that I try to pay back my mother on Christmas Day. I understand it’s hard for mothers to cope with this holiday. This involves spending tons of money, buying gifts, preparing food, decorating, wrapping, possibly meeting in-laws that they may consider crazy, etc. I do try to help whenever I can, and you know what I gave to my mother last Christmas? I gave her a Roku! I try to put tons of thought in what to give to people, sometimes it’s hard. This is why I make lists for what I want. Some people I imagine don’t do that. I help in any way I can. Cooking’s a bit of stretch for me, I’m not the greatest at cooking, but I try to help buy gifts, wrap them, those sorts of things. So yeah, moms give joy for Christmas, but it doesn’t mean they can’t get it in return. Just thought I’d say that.

“A Bad Moms Christmas” comes out November 1, which is two days before “Thor: Ragnarok.” I personally don’t think that’s the best business decision possible, but let’s see how it plays out. I don’t know how much of the world will go see “A Bad Moms Christmas” when it comes out, but then again I’m talking about the same world containing millions that decided to skip out on seeing “Blade Runner 2049.” By the way, f*ck you, that movie was amazing, it should have made more money! I’m willing to bet this could break soon, but as of right now, “THE EMOJI MOVIE” HAS MADE MORE MONEY OVERALL THAN THIS PIECE OF WORK! Thanks for reading this post, tomorrow I will have my review for “Thor: The Dark World,” so look forward to that! Stay tuned for more posts and I’ll ask you a question. Are you going to see “A Bad Moms Christmas?” What are your thoughts on the original? Let me know down below! Scene Before is your click to the flicks!