The f*cking movie known as “The Wall” is f*cking directed by the motherf*cker known as Doug f*cking Liman (The Bourne Identity, Jumper), stars Aaron f*cking Taylor-Johnson (Godzilla, Nocturnal Animals) and f*cking John Cena (American Grit, Trainwreck), and is f*cking about two American f*cking soldiers, there’s a lethal f*cker, err I mean sniper that is standing in their f*cking way, but the two are divided by a f*cking wall. …Now I could make a f*cking paragraph, illustrating my motherf*cking point that the movie is full of f*cking language, especially f*cking f-bombs that are f*cking shoved down your throat as f*ck. To be extra clear, this paragraph had fifteen f-bombs. “The Wall” had more, in fact, the exact total came out to 185 in the whole movie. Can you f*cking believe that?! And there’s sixteen!

According to the poster, John Cena is in this movie as one of the starring roles. Well guess what? He’s barely in it! Now, I don’t know how much people appreciate John Cena as an actor. I know he gets plenty of appreciation as a wrestler and a prank call meme. He’s also going to be in the “Bumblebee” movie which is scheduled to come out next year. Speaking of sports stars who also do acting on the side, I’d also like to say this isn’t the first time I’ve seen something like this happen this year. There was this movie that came out in select theaters and digital services in March called “You Can’t Have It.” On the main poster for the film, the one that’s actually the only image of the movie on IMDb, and the poster you’d find for the movie when searching for it on Amazon, Rob Gronkowski, tight end of the New England Patriots, was in the center of the poster. This pretty much suggests that Gronk’s character would have a big role in the movie. His character however, didn’t even come in until the end. In fact, when he came in, I felt like I was watching something that was very tacked on. Now, this movie was not as bad when it came to this, but Cena’s barely in this movie, and there’s one guy that should have been on the poster as opposed to John Cena, and that is Laith Nakli. Now, his face isn’t really shown all that much in the film so I wouldn’t really put it in the poster. Just put Taylor-Johnson’s character in the poster by himself, or make a silhouette of Nakli’s character, any of that would have worked in my book!

This movie’s directed by Doug Liman (left), a director who I personally like. He’s done some movies I’ve seen before, including a movie that came out this year, in fact it came out months after this one, and that’s “American Made.” That’s a better movie in my opinion, but let’s not get into that. Regardless of how this movie in particular is, Liman’s vision is not a bad one. The location which this film was shot is Antelope Valley, which is in Lancaster, CA. By the way, if you are wondering where that is it’s in a spot between Los Angeles and Bakersfield. This location gave me a feeling of silence but the silence wasn’t peaceful, it was completely deadly. It almost reminds me of “No Country for Old Men,” which is kind of funny because both this and that movie barely have any music. Speaking of things that I find amusing, this movie was shot on 16mm film. This format was also used to shoot “The Hurt Locker,” which is interesting considering the locations where the films take place and how similar they look. Also if it means anything, I have yet to watch “The Hurt Locker.” This fact amuses me because when it comes to shooting movies, it’s either usually digital nowadays or if a movie is shot on film, it would be 35mm.

Let’s talk about Aaron Taylor-Johnson, who plays a character named Isaac. I thought his performance was very well done in this movie given the script, which again, is f*cking full of f*cks. Also I didn’t really find the movie as a whole, all that interesting. It was mostly boring, I tuned out for part of it, I was making fun of how much it wanted to “f*ck” with the audience. Some of you reading this might think that my opinion should be adjusted because this movie comes off as slow and it’s just how it is. I’m not saying the movie should be fast, but I just want it to be interesting. And it wasn’t interesting in this circumstance.

I will say though that the slow pace of the film, might add a bit to the movie in terms of realism. However despite the realism, I still wasn’t able to appreciate the movie. Also, you may be aware of another war movie, specifically one that came out months after this one. The movie I’m talking about is “Dunkirk.” Now I consider “Dunkirk” to be one of my favorite movies of the year and part of it was due to how realistic it was as far as war goes. And keep in mind, this movie was PG-13. If it added in blood then it would have been just slightly realer, however it’s pretty realistic already. Although one thing I consider great about “Dunkirk” that I found to be missing from “The Wall” was investment in the story. I could have been invested in the story here, but little problems came up as the movie went on, which bogged down my interest for the movie on a complete scale. Now I saw “Dunkirk” in theaters, I saw “The Wall” at home. Maybe if I saw “The Wall” in theaters I would probably not be talking about this all that much, but I made a choice to wait on this movie because I’m an Amazon Prime member and I figured this movie in particular would be free for Prime members by the end of the year. 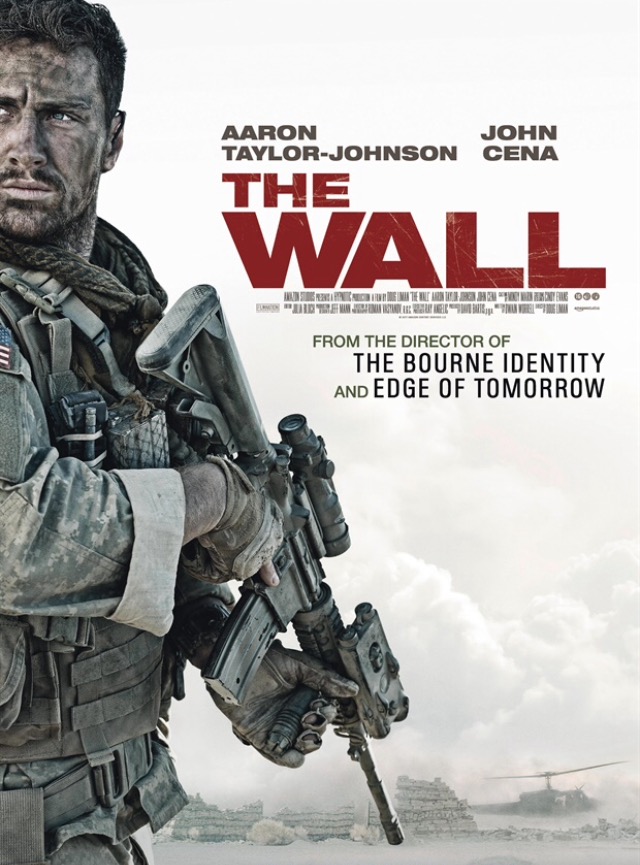 In the end, I’d say that I need a wall to separate me from the pile of boredom known as “The Wall.” This is a movie that looks great, has a talented director, and a good performance by Aaron Taylor-Johnson despite the fact that the script is f*cked up in a bad way. I don’t mind when the word f*ck is used in movies or TV, but part of me wondered if the amount of f*cks given in this film was even f*cking possible. I’m gonna give “The Wall” a 4/10. Thanks for reading this review, next Monday I will have my review for “Thor: The Dark World,” so stay tuned for that, along with more reviews coming soon! Speaking of which, this is not official, but on November 5th, I’m thinking of posting a review for “V for Vendetta,” and if you ever seen the movie you’d understand why. Also, I have a question. If you could magically create a wall to separate yourself from something for the rest of your life, what would it be? Keep in mind, I mean literally separate yourself. Just imagine that this thing can’t climb the wall or go around it. Let me know about that down below! Scene Before is your click to the flicks!