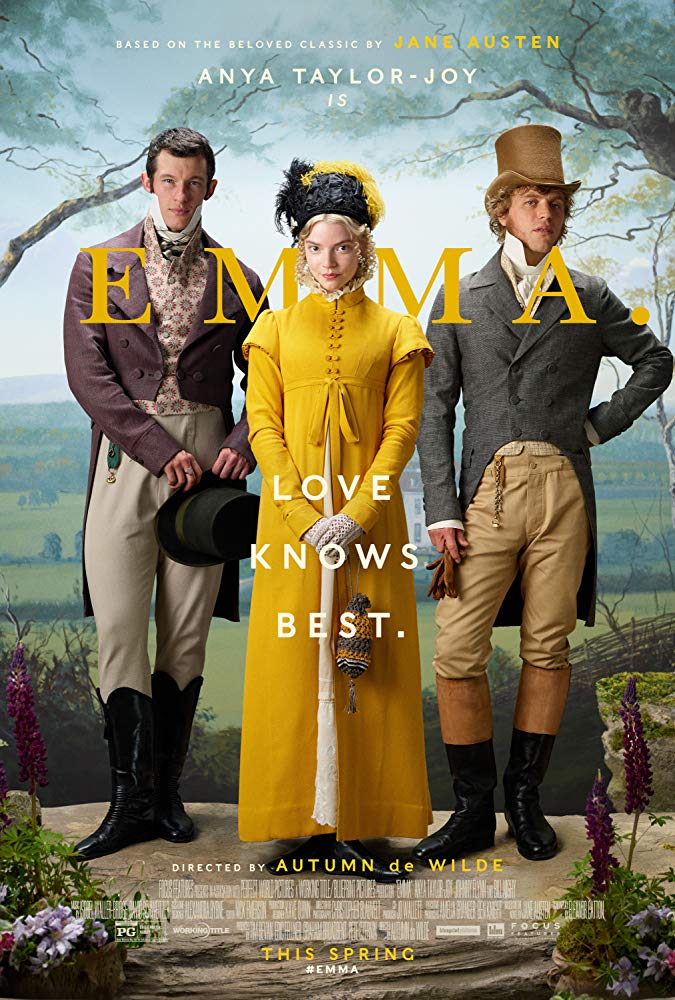 “Emma” is directed by Autumn de Wilde and this is her feature-length debut. This film stars Anya Taylor-Joy (The Witch, Thoroughbreds), Johnny Flynn (Song One, Beast), Josh O’Connor (The Crown, Florence Foster Jenkins), Callum Turner (Fantastic Beasts: The Crimes of Grindelwald, The Only Living Boy in New York), Mia Goth (Nymphomaniac, High Life), Miranda Hart (Spy, Miranda), and Bill Nighy (Norm of the North, Underworld). This film is based on a Jane Austen novel of the same name and follows its titular character as a selfish woman living in 1800s England. Throughout said time, she is revealed to be meddling in the love lives of the people she happens to know.

When I created Scene Before, my original intention for the blog was to give my honest thoughts on various matters. And to be completely truthful, this movie is not my cup of tea. In fact, the main reason why I went to see it is because there was a free screening at a local indie theater where Anya Taylor-Joy and director Autumn de Wilde happened to be appearing. I figured it would make for a fun night out. But when it comes to original material this movie is based on, I was never previously invested. In fact, I have a feeling this is going to piss off some bibliophiles reading this, Jane Austen wrote the book that I had the most miserable experience reading in high school, specifically “Pride and Prejudice.” I never found it that interesting, entertaining, or compelling. It was the complete opposite of a page-turner, but I was forced to read it, so I had no choice but move along. When it comes to “Emma,” I have never picked the book up. However, I was somewhat interested in this movie. In fact, if anything, this trailer right here PUMPED. ME. UP! Watch this trailer!

The music! The cuts! The fast-pace of it all! Whoever edited this deserves some toilet paper and hand sanitizer to get through this dire time!

However, that’s just a trailer. How was the movie itself? Pretty decent, actually. While “Emma” is undoubtedly nowhere near my cup of tea as far as stories go, I found myself chuckling, smiling, and overall having a fun time watching this movie. And a lot of it may have to do with the attention to detail of everything in it. The production design could eventually go down as some of my favorite of the year. The colors are vibrant and match the charm of this movie’s specific time frame. The performances, across the board, are well executed. The ensemble of “Emma” is well put-together. If this were a silent film, I don’t think I’d be able to remove my eyes away from the screen just from how hypnotizing everything feels. It’s easy to tell that Autumn de Wilde brought her vision to life, or depending on who you ask, Jane Austen’s vision to life. In fact, before she took on “Emma” she dived deep into photography, which may partially signify how a lot of the movie’s individual frames feel like a painting or something you’d find hanging in an art gallery. The cinematography in the film at various points is extremely pretty. I am not lying. As for costume design, that is another highlight. Granted, when it comes to movies that take place in a period or setting like this, it is not that surprising that costume design is a key factor into what could make the movie at least partially work.

This is not the first “Emma” adaptation brought to the screen, but given how I have not seen the other adaptations of this kind, I don’t really have much to compare it to. But I feel that if I were to read the original novel of “Emma,” I would at least be somewhat satisfied by the writing style of this adaptation, given how it is true to the period, and the vibe of the film has a rather witty feel to it. Jane Austen is an author who seems to bring an individual feel to her stories, and that seems to be translated well here. Granted, when I read “Pride and Prejudice,” the writing style made it one of the most infuriating experiences of my time on this planet. But a movie like this, brings life to said writing style and evokes a sense of imagination.

Fun fact about the Emma character, when she was being portrayed by Anya Taylor-Joy, the actress thought she kind of came off as an unlikable being. Granted, that is kind of the point. And knowing what the movie is about and what it exactly contains, I can understand why. But at the same time, Emma is a character who I consider to admirable despite how selfish or manipulative she happens to be. Part of it may go towards the way the movie presents her and how I cannot imagine anyone else in Emma’s shoes except Anya Taylor-Joy. The casting for Emma herself was very well done given how there happens to be some sort of individualistic flair attached to said character.

As for problems, while this film is well-paced, it still has one or two moments where it is kind of a drag compared to others. Regarding the movie itself, it is somewhat forgettable. I may be cheating with this given how I am reviewing this almost a full month after seeing it in the theater, but this is a story that I do not think I’ll want to tune into again while it is still fresh in my memory. Granted, Comcast-owned studios, including Focus Features, the distributor of “Emma,” just so happen to be putting their movies that were supposed to be in theaters onto VOD, so I could watch it again at home if I really wanted to, but “Emma” is not a movie that I felt an instant connection to. I just thought to myself, “Eh, that was a fun couple of hours.” Maybe the novel is better. Because, you know, apparently every book is SUPPOSED to be better than the movie. The “Emma” movie is witty, charming, and marvelous to gaze upon, but it’s missing something. It has the vision, it has the individualistic style, but it doesn’t have the oomph factor I want in movies nowadays.

In the end, I found myself rather satisfied with “Emma.” I don’t think this satisfaction will ever encourage me to read the book, but at the same time, the experience I had while watching the movie in a pretty full theater could have been a contributing factor to making it feel somewhat communal. By the way, remember when we went to movie theaters? It was a long time ago! “Emma” is not my cup of tea, and I think this review kind of shows it. However, I will not deny that I indeed had a good time. I’m going to give “Emma” a 7/10.

Thanks for reading this review! I just want to let you all know that my next review is going to be for Pixar’s new movie “Onward.” By the way, if you want to watch the movie before I review it, it is coming to digital tonight due to all the theaters shutting down. So if you want to rent it and read my review if you want to see where we stand in terms of our thoughts on the film, feel free to chill out on your couch, go to a preferred digital service whether it be Prime Video, Fandango Now, Google Play, or Vudu, and you’ll have access for the movie, that way you can watch it and determine your thoughts on it before reading my review. That is unless I somehow list my thoughts for “Onward” before the movie drops everywhere, but we shall see. Be sure to follow Scene Before either with an email or WordPress account so you can tuned for more great content! Also, since you clearly have all the time in the world, be sure to check out the Scene Before Facebook page to get the latest updates of the goings on for the Movie Reviewing Moron. Hey, that rhymes! I want to know, did you see “Emma?” What did you think about it? Or, did you see any of the other adaptations of “Emma?” What are your thoughts on those? Did you read the book? Give me your thoughts on that! Leave your thoughts and opinions down below, and stay safe everyone! Scene Before is your click to the flicks!