Hey everyone, Jack Drees here! Last week I reviewed “The Maze Runner,” and I’m letting you know about this because one, it feels appropriate, and two, just about nobody saw it. Sure, people saw “The Maze Runner” as in they saw the movie, but nobody clicked on my review. I’ll have a link down below to my review for “The Maze Runner,” and if you’re lucky enough, you’ll be one of the first people to check it out! This week, I’m going to be following up on my “Maze Runner” review I did last week and I’ll be showing you all my thoughts on “Maze Runner: The Scorch Trials,” as suggested in the title of this post. A title so stupid that it’s nearly a copypaste of the title to my first “Maze Runner” review, but with more s*it sprinkled into it. Enough with that, let’s start the review!

“Maze Runner: The Scorch Trials” is directed by Wes Ball, who also directed the first “Maze Runner” installment, and stars Dylan O’Brien (The Internship, Teen Wolf), Kaya Scodelario (Now Is Good, The Truth About Emanuel), and Thomas Brodie-Sangster (Love, Actually, Phineas and Ferb) and is the sequel to “The Maze Runner,” which came out one year prior to this installment, and is based on a popular teen angst book by James Dashner. Now that the Gladers we know from the first movie are out of the maze, they have to deal with a new landscape, with new obstacles. And this landscape looks like it’s seen some s*it.

When it comes to the first “Maze Runner,” I really enjoyed the movie for what it was. It’s a lighthearted teen angst movie with a bunch of folks trapped in a maze, trying to get out. Several moments had me glued to the screen, and now that these people are out of the maze, the question is, what’s next? This movie goes into that. In honest truth, I can barely tell you what comes next, because this movie. Was. Boring as f*ck! The first “Maze Runner” was engaging and entertaining, and while the first forty minutes of this thing is quite the same way, although maybe not as much, it just didn’t work out in the end. I actually saw ads for this film in 2015, and I haven’t seen the first installment to this series yet, but I knew about it and everything. Compared to the first film, this looked uninspired, and looked like it was there to have something happen as filler before the last film. I’m not entirely against the young adult genre, there is some good stuff that has come out of it. Although this is one major example of the bad. While not as intolerable as “The Fifth Wave,” I certainly can’t say this had a likable feel to it. 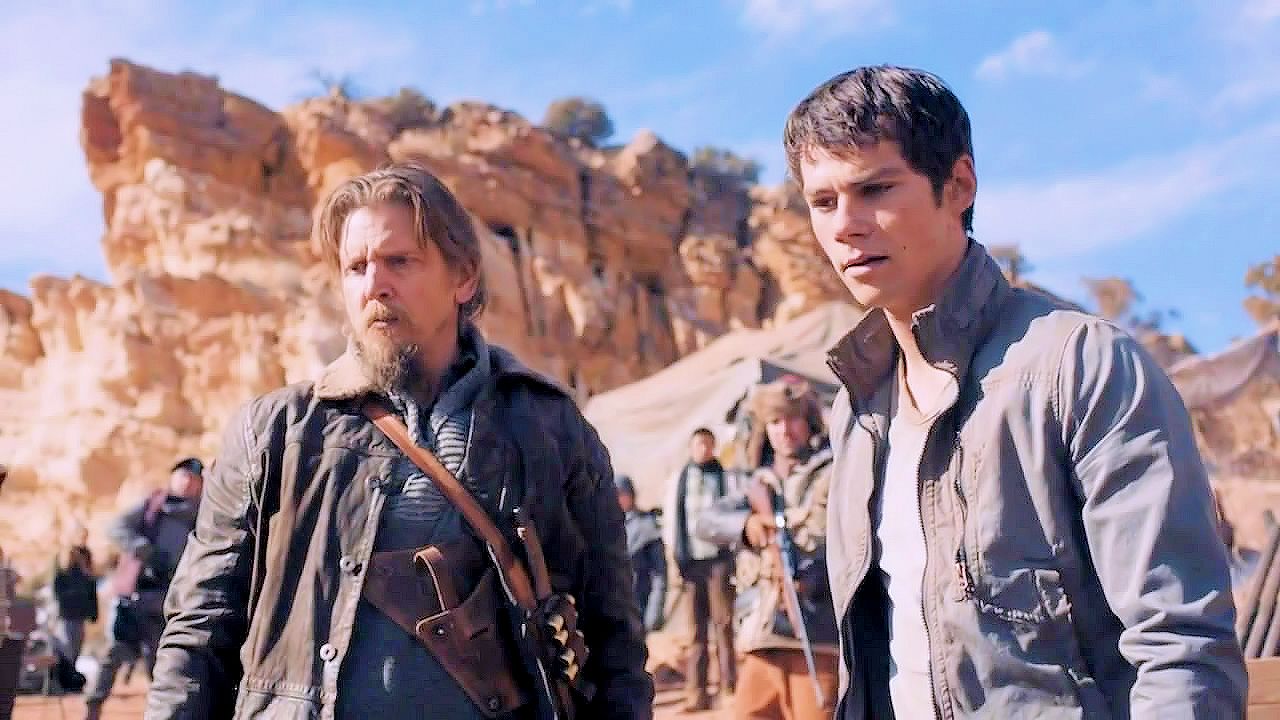 Don’t get me wrong, the vibe that’s present for the movie kind of works. Most of it is in a desolate landscape and given the music, story, not to leave out the motivations and attitudes of the characters, I’d say everything was logical. Although as far as the movie’s progression goes, that’s where the weaknesses start to pour in. This movie honestly, as I watched it, felt like a cash-in. I don’t know how much planning went into this particular installment, nor do I know how much planning went into writing the book for it, but if the book was lazy, the laziness of this movie therefore wouldn’t be all that surprising. I mean, I know the sequel was planned because of the semi-cliffhanger ending the first film gave, but it doesn’t change how poor the execution here was.

The first forty minutes, as mentioned, were entertaining to me. In fact, you know how this movie is called “The Scorch Trials?” Basically the Scorch is what the desolate landscape is called. Everything that happens prior to getting towards the scorch scenes was the entertaining chunk of the movie. As I got to the Scorch portion of the film, I wanted to take out my phone and do something on there instead of watch the movie. I assure you whatever it was I did on my phone, was ten times as fun as the movie. You might as well say that as we got to the scorch scenes, my mind was instantly “scorched” by Dullivan, the god of boredom. Even one or two fast paced chase scenes couldn’t keep me intrigued. I tried my best not to fall asleep, and while I succeeded, I can’t say I feel like I benefited from this experience.

I was however engaged by the ending. While part of it was predictable, I was constantly thinking to myself, when was this s*it going to conclude? I wanted to do something that would have been worth my time. I won’t go into much detail, but it was a big turnaround for my interest towards the film. I got engaged for a moment, but it wasn’t enough for me to say this film is competent.

This film once again stars Dylan O’Brien, or for this movie to make sense, Dullen O’Brien. He’s not a bad actor and once again, I buy him as this teenager. He does a fine job playing Thomas and the transition from one movie to the next was very fluid. During the first forty minutes, I was able to root for this guy not to mention with those alongside him. Even though this movie is wicked boring. Whoops! Sorry, I meant, WCKD boring.

I can’t even talk about this movie anymore! I honestly want to have more to say, but in the long run, I have to stop here! I’ve been running this maze too long and it’s time to collapse in fetal position! If you think that I’m lazy for not going on, let me just remind you that this movie felt lazy so it all comes together! So yeah, this movie sucked, it was boring, and that’s pretty much the gist of it. Badabing badabang badaboom.

Guys, if you can’t tell by how much I wanted to get this review off my belt, I hated this movie. “Maze Runner: The Scorch Trials” is yet another flop in the young adult genre and I just hope that when it comes to “The Death Cure,” I don’t have a similar experience. When it comes to teen angst movies, this may not be the most horrible of every single one I watched, but it might be the most boring. I only described one character! You know why I did that? Because this movie f*cking sucks and I hate talking about it! Part of me doesn’t even want to rate it! But rules are rules, I gotta rate this bitch. I’m gonna give “Maze Runner: The Scorch Trials” a 3/10. Once again, if you watch this movie, chances are you won’t be totally bored through the whole thing, but there’s barely any good parts in it. I have never read the “Scorch Trials” book, but I imagine it’s better than this junk. Thanks for reading perhaps one of my most intentionally lazy reviews ever despite having a descriptive title. I barely survived the horrendous killer maze that was “Maze Runner: The Scorch Trials,” and in the end, that’s what really matters. This weekend, I hope to see “Maze Runner: The Death Cure” and I just hope for humanity that it’s better than this movie, or at the very least, just a good movie. Although this is a January film and if you know how movies are, January is a s*itshow. Stay tuned for that review and more great content! I want to know, did you see “Maze Runner: The Scorch Trials?” What did you think about it? Did you read the book? What did you think about that? How would you compare the two pieces of work alongside each other? Let me know in the comments! Scene Before is your click to the flicks!