“Scoob!” is directed by Tony Cervone (Back at the Barnyard, The Looney Tunes Show) and stars Will Forte (The Last Man on Earth, The LEGO Movie), Mark Wahlberg (Transformers: Age of Extinction, Ted), Jason Isaacs (Star Trek: Discovery, Star Wars: Rebels), Gina Rodriguez (Annihilation, Carmen Sandiego), Zac Efron (Neighbors, High School Musical), Amanda Seyfried (Mamma Mia!, First Reformed), Kiersey Clemons (Angie Tribeca, Transparent), Ken Jeong (The Masked Singer, The Hangover), Tracy Morgan (The Last O.G., Rio), Simon Cowell (The X Factor, America’s Got Talent), and Frank Welker (The Smurfs, DuckTales). This film is yet another addition to the “Scooby-Doo” franchise created by Hanna-Barbera, but this was a rare case for the franchise in which this was supposed to be a big theatrical movie.

…If only more theaters were open…

Now, it has premiered on streaming services and On Demand. Nevertheless, the film’s ideas themselves remain the same. “Scoob!” centers around the popularized gang of characters who split up as the vicious Dick Dastardly plans to unleash a “dogpocalypse” to the world and its people.

I saw the main trailer for this film and I was pretty indifferent about it. I had no strong feelings of excitement towards the movie itself, nor was I thinking it would be the worst thing I’d ever see. When it comes to children’s content, I was pretty sure that “Sonic the Hedgehog” was going to get on my nerves more, which didn’t turn out to be the case whatsoever as it might be my favorite movie of the year so far. But, judging this year’s resume of films, that really doesn’t say much as the highest score I have given to a film so far this year remains at a 7/10. Speaking of things that get on my nerves, “Scoob!” is a crime against humanity that has officially engulfed my brain in flames. 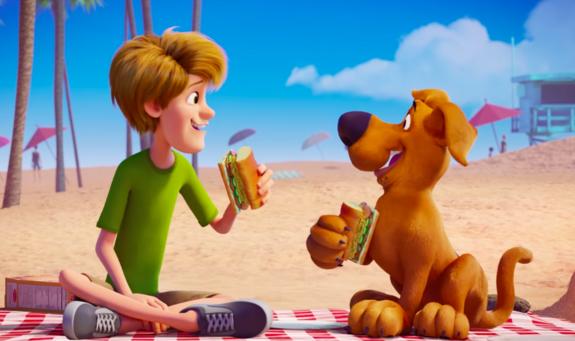 Let’s start out with the positives, and I’m not saying there are positives because I’m a nice guy, in fact, isolation is probably turning me into an entitled asshole, but nevertheless. The film is decently animated. A lot of the images are shiny and vibrant. Then again, it is 2020, and at this time, good animation is a requirement. Plus, I did rent the movie in 4K. The other thing I liked about the film, and while I wouldn’t call it some of the best material I have ever seen, are the introductory scenes. The way that Shaggy and Scooby-Doo meet is kind of nice to see. Granted, I saw it in the trailer, but the way it plays out in the movie makes for a somewhat entertaining scene. However, there is one moment in the scene that I probably consider to be a little too far-fetched. Even so, it’s still a delightful scene. I will also add that getting Iain Armitage to voice young Shaggy is a perfect casting choice. The first scenes of the film where Shaggy and Scooby grow up together make for good buildup while also focusing on the mysterious and spooky elements of the “Scooby-Doo” franchise. The way the gang meets and sticks together makes for a fun scene and montage and even though it did not seem to promise an absolute masterpiece, I did at least expect to be somewhat amused throughout the hour and a half runtime of this movie. 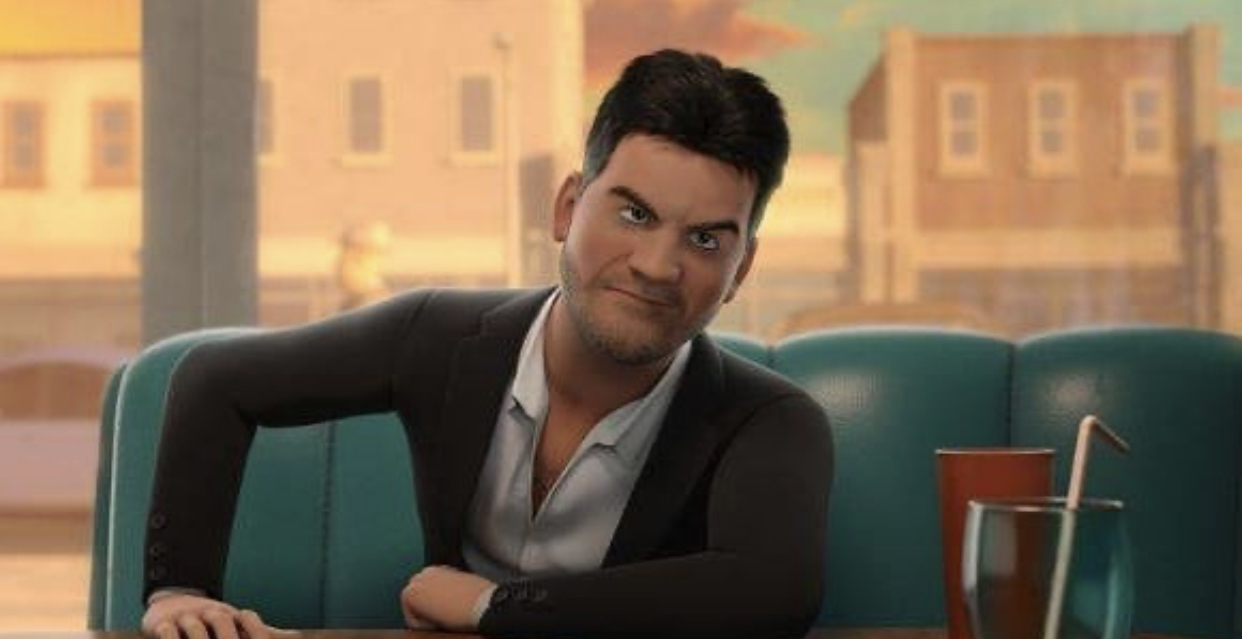 As soon as we get around the first scene with Simon Cowell playing himself, I lost any and all interest I could have possibly had with this film. Because as soon as the main course starts, this movie basically becomes the latest incarnation of *insert superhero title here*. “Scoob!” is essentially an attempt to turn the “Scooby-Doo” franchise into a superhero movie. Everyone at Warner Bros. must have been thinking, “Marvel’s popular. Our very own DC is popular. Scooby-Doo? Not cool enough.” I guess this is one reason why Warner Bros. thought it was okay to release this film in May and not October. The movie takes place during Halloween, geniuses!

As for the heroes in this movie, both super like Blue Falcon and Dee Dee Sykes and less than super such as Scooby and Shaggy, I basically rooted for none of them. Everybody felt stupid, underwhelming, and even though Scooby and Shaggy have probably never been a part of a superhero mission in their lives as this movie likely suggests, some of the things that go on in this movie make me think that they need to look The Official Encyclopedia of Predictable Superhero Movie Actions. That sort of thing does not exist, but goddammit I would buy it if it were out there! There are one or two moments in this movie that drove me so mad, both as a fan of superhero movies and as someone who wants the characters in “Scoob!” to be competently written. Now I do not mind predictable movies as long as the people behind the project can make it fun. I just talked about “Onward,” which I could think through, but the overall fun and emotion provided within the movie makes up for its predictability. But “Scoob!” reached a level of predictability that I did not only avoid expecting to see, but as far as how the characters handled it, it angered me to the moon and back. When a decent amount of your movie’s characters are morons, why should I root for them?!

As for the villain, Dick Dastardly, he kind of feels like a D-list Thanos. He’s heavy, he’s got kind of a punch-able face, and he might honestly be the best character in the movie. Keep in mind, compared to Thanos, he’s nothing. But I liked the way they handled his character because there was some depth to him. Granted, they tried to dive deep into some secondary superheroes who play a role in the plot, but I couldn’t even come close to rooting for them. There is a saying that a movie is only as good as its villain, but when the heroes turn me into a villain, then it probably doesn’t matter how much I liked the antagonist of “Scoob!.”

May I just remind everyone that four people are credited for the screenplay for “Scoob!?” How did we get here?! Also, three people worked on the story. When it comes to these bloody genius writers, some of their previous credits include “Playing with Fire,” “Norm of the North,” and “Alvin and the Chipmunks: The Road Chip” just to name a few.

I’m not lying when I suggest that this movie is basically trying to copy the success of a superhero film. There’s a big team trying to stop the bad guy, there’s a couple scenes with hi-tech gadgets and techno wizardry that develop the plot, and you know how I mentioned that Dick Dastardly is basically Thanos in this movie? Guess what his plot is? Trying to find a series of bones to complete his collection! We get it! “Avengers: Infinity War” is one of the most successful movies of all time! It happened! Just be “Scoob!!” Actually, you know what? I take that back. Don’t be “Scoob!,” “Scoob!” is terrible. Be a better movie.

To add on to the superhero craze, you know what Warner Bros. is planning on doing in the future? Well, if you look at the Wikipedia page for “Scoob!,” it suggests that “Scoob!” “is intended to be the first installment in a series of films set within a Hanna-Barbera shared cinematic universe.” F*cking hell.

If you have ever been remotely interested in the Marvel Cinematic Universe, you should be thankful that critics gave “Iron Man” positive reviews, otherwise the MCU probably wouldn’t even exist today. As far as I am aware, “Scoob!” is getting mixed verdicts across the board. Who knows what’ll happen there? But nevertheless, if I have to sit through a cinematic universe full of material as bad as this, I am officially no longer a movie person.

In a world full of superhero and comic book movies, “Scoob!” is like that kid trying to join the cool kids table saying, “Hey, I like Fortnite,” but everyone else thinks the kid is just trying to get attention. I will give a ton of credit to the animators behind “Scoob!,” because the film does look nice on a screen. Again, I watched it in 4K, the colors really stood out to me. The one thing I wish I could do right now as a movie-watcher is declare whether or not something is worth checking out in theaters. But, I can’t do that. So instead, I shall pose the question, is “Scoob!” worth renting for $19.99? As far as I’m concerned, that question earns a strong “no.” This film feels like a Marvel flick that doesn’t even know who its audience truly is. The film tries its hardest to “modernize” the “Scooby-Doo” property, which I honestly think was a big mistake. Well, at least they got Frank Welker to voice Scooby. There’s even a joke regarding the character of Fred Jones that involves him being compared to one of the Hemsworths! This film is infuriating and unbelievably forgettable! In the end, “Scoob!” is ninety-something minutes of “what the f*ck just happened?” and I’m going to give it a 3/10.

Thanks for reading this review! I usually don’t talk about movies that avoid a theatrical release, but as long as movies are not hitting theaters or as long as there are no theaters open to play them, I will be talking about movies that hit streaming or DVD early. There will likely have to be some sort of previous intention to have the film theatrically released, but that’s just what I currently have in mind. I just want to watch movies that are better than “Scoob!” at this point, that’s all I care about. Be sure to follow Scene Before either with an email or WordPress account so you can stay tuned for more great content! Also, be sure to check out my Facebook page, which will hopefully be updated with content involving much better movies in the future.

I want to know, did you see “Scoob!?” What did you think about it? Or, what is your favorite Hanna-Barbera property? Let me know down below! Scene Before is your click to the flicks!