“Game Night” is directed by John Francis Daley and Jonathan Goldstein, who together have collaborated on directing “Vacation” and stars Jason Bateman (Horrible Bosses, Juno) alongside Rachel McAdams (Mean Girls, The Notebook) as a couple who often do a game night at their house with people they’re close with. However, Jason Bateman’s character of Max happens to have a brother who is in town by the name of Brooks, who is essentially maximized in every way compared to Max. Brooks is planning a game night of his own and everybody ends up attending, this eventually leads to everyone’s realization that this is not just your standard gaming session where people play Scrabble or Life or Pictionary, and it is instead, a murder mystery, thus leading to the movie’s crazy, action-packed events.

I wanted to see “Game Night” when it first came out in theaters, however I never got around to it during its theatrical run. I felt that other movies were more important, I was busy focusing on and recapping the Academy Awards at the time and it just happened to be something I never came across. But the trailer made this movie look great. Did it feel like something a studio would assemble together? Maybe, a little bit, but it felt like it was done with character and passion. Plus, I heard sometime while I was missing this movie that the duo directing this film are actually signed on to direct a “Flash” film for DC. That doesn’t really say much, but given that statistic, it did get me intrigued. I wanted to see how they’d do with this film, thus giving me a sense of what they could do with a film like “The Flash.” And I’d say they did a very good job.

When it comes to “Game Night,” this movie just surprised the hell out of me. I didn’t think “Game Night” was going to be bad, but I didn’t expect to laugh my ass off as much as I did while watching it. One of the first exchanges of dialogue of the movie takes place during this trivia night, and it literally set the tone for me, just a few minutes in, I’m already loving what I’m seeing. And this made me ask myself, could this top “Blockers?”

Some of you may be wondering why I’m asking that. “Game Night” was released on February 23rd, 2018 in the United States, and I’ve witnessed several comedies this year, or movies containing comedy in them, not just “Blockers,” and they’ve caught me by surprise, because in 2017, comedy was literally, no pun intended, a joke to me. With movies like “How to Be a Latin Lover,” “Fist Fight,” “Snatched,” and the gosh-awful “Father Figures,” 2017 overall just fell flat. Heck, I was even underwhelmed by “Guardians of the Galaxy Vol. 2!” Granted they had an enormous fluke with “The Disaster Artist” towards the end of the year, but still. I’m not saying all of 2018’s comedies have been great, go watch “Uncle Drew,” “Gringo,” or “Life of the Party” and tell me how you feel afterwards. But when you consider how much “Blockers” surprised me and made me see layers that I didn’t think I’d witness, how heartwarming yet hilarious “Tag” happened to be, and how many stitches I needed after “Avengers: Infinity War,” which isn’t even a comedy, but it managed to make me laugh more than I would at many comedies coming out nowadays, all of this just seems amazing. Comedy has turned around significantly for me this year, and everybody seems to be stepping up their game. In fact, kind of like “Blockers,” I kind of had an urge to watch “Game Night” again after viewing it for the first time.

Before we dive into some main points people usually need to go over for comedies, I’d just like to point out that there are points where I noticed the cinematography for “Game Night” is probably better than it had to be. There’s this sequence involving a fancy-looking egg and as everyone seems to be tossing it around, it’s all done with the camera moving around in one shot for an extended period of time as the characters are just doing what they’re supposed to do. It was just magic.

As far as the type of comedy that you get in “Game Night,” it’s basically mile-a-minute humor. Most of the humor seems to out of the characters’ mouths as opposed to actions, however some of the actions in this movie, while sometimes disturbing, but not in a way that turned me off, were certainly funny as well. Is anything new really brought to the table here? Nothing I can list off the top off my head, but whatever is there, works. This movie was done by some of the people who have worked on “Horrible Bosses,” and I’ll say having watched both “Game Night” and “Horrible Bosses,” if you like the tone and humor delivered in “Horrible Bosses,” I’d say you’d end up liking “Game Night.” In fact if you ask me personally, I like “Game Night” better than “Horrible Bosses.” Maybe it’s because I was rather late to the party when it came to “Horrible Bosses” and my mother was hyping it up like a bride does with her own wedding. My expectations, while not small, were perhaps lower for “Game Night” than they were for “Horrible Bosses.” And as of right now, I think a lot of you don’t have to see either one of these movies and automatically consider “Game Night” better than the other. Why?

This guy. If you hate this guy, “Horrible Bosses” might not be for you.

Some of the more recent movies I reviewed like “Uncle Drew” and “The Hurricane Heist” have something in common. Let me give you a small hint.

“UNCLE DREW” REVIEW
“Let’s talk about some of the characters in “Uncle Drew.” They all suck. They don’t drink enough Pepsi in the movie!”

“THE HURRICANE HEIST” REVIEW
“When it comes to Toby Kebbell, he plays a guy named Will, and what I have to say about his character is what can pretty much be said for everyone else’s characters. All of them suck, they have no personalities, not even their quirky southern accents could have saved this movie.”

Fortunately, I don’t have to say such a thing about this movie, because every single character was awesome! The strong point of “Game Night” is in the chemistry between everyone on screen, almost everyone is in a pair, whether they’re a couple or just partners, their separate interactions come together to make something super. A story between Max (Jason Bateman) and Annie (Rachel McAdams) is that a reason why they can’t have kids is because of a sibling rivalry between Max and his brother, Brooks. When it comes to another couple, Kevin (Lamorne Morris) and Michelle (Kylie Bunbury), they get into an argument about the past, specifically how Michelle slept with a celebrity. And there’s Sarah (Sharon Horgan) and Ryan (Billy Magnussen), which is basically a combination of the brains and… someone who literally needs the brains.

One thing I seem to notice about a couple good comedies is how much a dog would stand out in the movie, and in some scenarios, maybe not in the most pleasant of ways. This has been proven with “Anchorman” with Ron Burgundy’s dog, Baxter. It has also been supported in “There’s Something About Mary” with Puffy. Here, there’s a dog that’s often held by a character who I liked more and more as the movie went on, specifically Gary played by Jesse Plemons. There’s this scene where the dog is all covered in blood, I won’t go into much detail, but it’s in the trailer. Also, speaking of Jesse Plemons’s character, this is definitely one of the better performances the movie has to offer. It may not seem like much at first, but the difficulty seemingly increases as Plemons delivers a particular line in a certain way, it’s just priceless seeing his character do what he does.

I really don’t have much else to say about “Game Night,” but part of me wonders why they would name Max’s brother, Brooks (Kylie Chandler), the way they did. Is it to make him have a superior sounding name and not just be a superior fellow by himself? And you might be thinking, “Hey, Jackass! How the heck is Brooks a superior sounding name?” Ever heard of Brooks Brothers? If you have a luxurious fellow in your movie, you might as well give him a name that associates with luxury. I don’t know if this is true, but I’m curious to know the meaning behind his name if there does happen to be one.

In the end, “Game Night” just shows that 2018 is probably one of my favorite years in regards to comedy ever. If I remember correctly, I think probably laughed here as much as I did during “Tag,” which is kind of funny considering New Line Cinema and Warner Brothers worked on both movies. The chemistry between all of the characters was fantastic, I basically died laughing, and there’s even a couple lines that I want to quote forever. 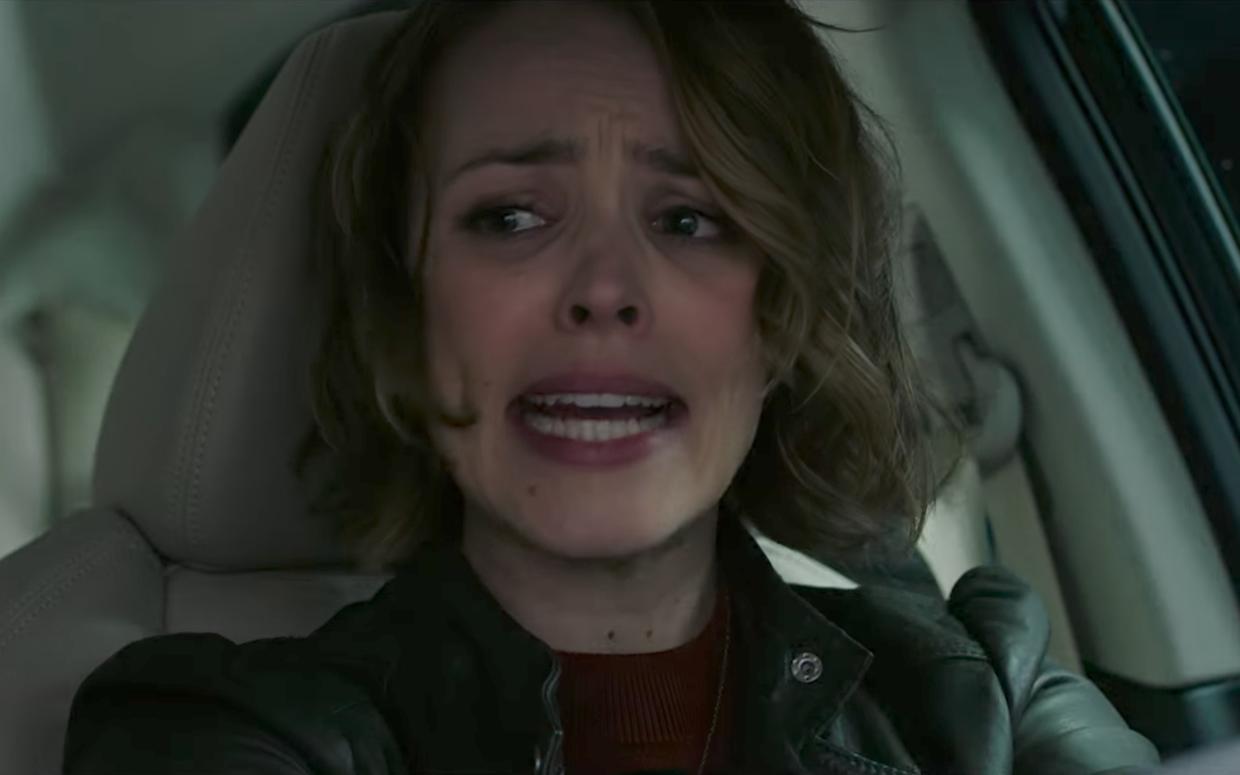 Not me sister, I motherf*cking loved “Game Night.” I’m gonna give “Game Night” an 8/10. Thanks for reading this review! I’m not sure what movie I’m gonna review next, however Steven Soderbergh’s most recently released film which he directed, “Unsane,” is now free on Amazon Prime, so maybe I’ll review that if there’s nothing else to do. Be sure to follow Scene Before so you can stay tuned for more great content! I want to know, did you see “Game Night?” What did you think about it? Or, what is your favorite comedy of 2018 so far? To me, it’s a tough choice, probably either this or “Blockers,” nevertheless, let me know your opinions on what this year’s best comedy is for you! Scene Before is your click to the flicks!