“Kin” is directed by Jonathan and Josh Baker, two brothers who have worked together on multiple short films. This movie stars Myles Truitt (Queen Sugar, Black Lightning), Jack Reynor (Sing Street, Glassland), Zoë Kravitz (Divergent, After Earth), Carrie Coon (The Leftovers, Gone Girl), Dennis Quaid (Far From Heaven, Frequency), and James Franco (Spider-Man, The Disaster Artist) and is about an ex-con who has been recently released from prison and his teen brother who are on the run from soldiers. Alongside them we have a unique weapon, which just so happens to be some of their only protection.

The main reason why I’m reviewing “Kin” is not because I’m particularly interested in the movie, but because this review works around my schedule. I have reviewed movies in August, but there’s no point where I’ve actually gone out to see a movie actually released in the month of August. I wanted to see “The Meg” so bad, but I never got around to it. I had some sort of interest in movies including “Mile 22,” “The Happytime Murders,” “The Spy Who Dumped Me,” and “Searching.” I could have gone out to see these movies, but there was no time and on occasion, no way, to get to any of these. Apparently adventures like “2001” in IMAX and “Eighth Grade” are a lot more important. Now it’s September, and my chance to review an August movie is finally here. And I’d say for the most part, this August movie was worth my time. I have my problems with it, but we’ll get to those later. This movie stars Myles Truitt and Jack Reynor as two “brothers” if you will. Jimmy (Reynor) was raised by his birth family while Eli (Truitt) happened to be adopted. Jimmy is not essentially the brightest bulb in the world. As the movie begins, we find out that Jimmy just happened to be released from prison. When the main plot kicks in, this is essentially where the two brothers have to team up. So the two go on a road trip, leaving post-apocalyptic Detroit to wherever their travels take them. And I gotta say that this is probably where “Kin” hits its highest marks. Not only did both actors play their characters well, but they’ve also delivered terrific and believable chemistry. None of it was awkward, at least from what I remember, and it made me see these actors purely as these characters. Who else is gonna play them now?

Now this movie is produced by the same folks who produced “Stranger Things.” While I have not seen much of “Stranger Things,” I am certainly well aware of what it is all about. And there are some moments of this that can feel like “Stranger Things.” Probably the biggest reason that can associate with such a statement is that the two main characters who have to stick together are on the younger side of the spectrum. And as mentioned, both of them did very well in this movie. 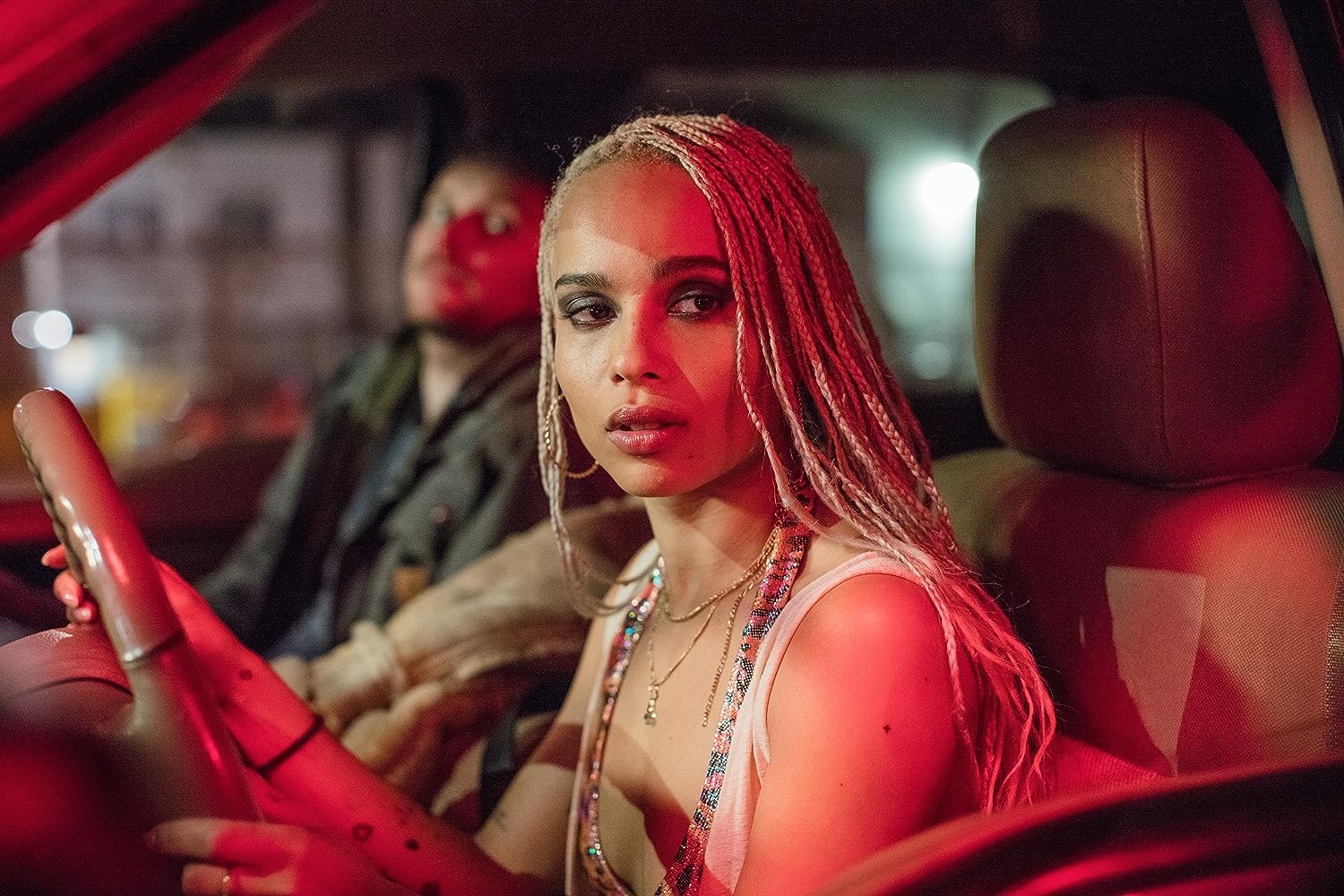 Along the way, the duo meet a girl by the name of Milly, played by Zoë Kravitz. Where do they meet her? A strip club.

Out of all the places that the two brothers could stop, the older brother, who happens to be in control of the wheel (for good reason), decides it would be reasonable to go to a strip club alongside his FOURTEEN YEAR OLD ADOPTED BROTHER. As crazy enough as that alone is, they don’t check IDs (upon research though I don’t think ALL clubs do that).

Anyway, they meet her at a strip club and what I love about this is not what any stereotypical teenager would go ahead and talk about. It’s not about how f*ckable she is or how hot she looks onstage. In fact, this movie is rated PG-13, so it’s not like you have to come in expecting anything hardcore. The thing I love about her is how the movie utilizes her character to make her actually have a personality. It’s not like she’s a sex object, she has a purpose in the film. There’s a point where I wouldn’t say she’s actually “doing s*it,” but she does happen to have heavy involvement in the plot. But then again, and this may be nitpicky, but this probably wouldn’t have happened if the dynamic duo didn’t get kicked out for having a CLEARLY underage kid in their party.

One of the movie’s biggest things it has going for it is the futuristic ray gun that seems to be getting a lot of attention when it comes to marketing. When it comes to that particular aspect, I’m both impressed and maybe a tad disappointed at the same time. On one hand, the ray gun was a nifty little tool and I thought it really served a purpose, not to mention a bit of fun, in the story. On the other hand, it might have gotten maybe somewhere near minimal use, which kind of underwhelmed me. If this movie gets a sequel, which I doubt will happen unless this movie makes a s*itton more money than it did during its first few days, I want to see more use out of the ray gun if there is time for it. I’ve been exposed to others’ reviews on “Kin” before publishing this one, and they’ve said that this film, tonally speaking, is way off. While I do happen to disagree on that point, I do agree that this film needs to hit the big guns. There is although a pretty cool side story involving a couple of people who actually had the gun before it was even found and taken by the two brothers. Also that reminds me, I wanted there to be perhaps a more memorable and fascinating discovery. I don’t even remember how it was found except for bits and pieces. In the “Jumanji” movie, specifically the one starring Robin Williams, I still remember the discovery of the Jumanji board game. I remember bits of the music, where it was, and it just felt like you were maybe in an adventure film. Maybe like “Indiana Jones” or something.

This film is actually based on a short film directed by the twin brothers Jonathan and Josh Baker. These two brothers eventually went on to direct this exact movie. I have not seen the short, but it is called “Bag Man,” so I have nothing to compare it to, but I do want to give a bit of credit to this film for at least raising my interest towards checking that out.

In the end, “Kin” is actually a bit of a surprise for me. I went in not expecting much at all. In fact, I walked out thinking, that wasn’t really that bad. This is like walking into a Kmart or Sears at this point seeing that they’re actually doing a somewhat decent business and keeping the stock flowing smoothly. Maybe it’s not perfect, but hey, it could definitely be a lot worse. I do have my problems with it, and trust me, some stand out. I don’t think I’ll remember “Kin” as much as I do with some other movies, but this was certainly something I couldn’t complain about. I’m gonna give “Kin” a 6/10. Thanks for reading this review! Right now it is September, and it is more than a month away until “First Man” releases in several countries, including the US. For those of you who don’t know, “First Man” stars Ryan Gosling (Blade Runner 2049, Crazy Stupid Love) and Claire Foy (The Crown, Breathe), it is directed by Academy Award-winning director Damien Chazelle (La La Land, Whiplash), and happens to be, depending on how you look at things, based on the true story, or a fantasy with a hidden truth and meant to be shot in a studio, on the Apollo moon landing. In honor of that, starting sometime later this month, I’m planning to be reviewing a bunch of space-related movies. Be sure to stay tuned for that. I’ve got a number of options in my head. I’ll just say, that my first review is probably guaranteed to be “2001: A Space Odyssey.” Not only does it have some sort of relation to space, but this year is the movie’s 50th anniversary, and based on results from a Twitter poll, “2001” received the popular vote. Stay tuned for this, along with other great content! Also, be sure to follow Scene Before either with an email or your WordPress account! I want to know, did you see “Kin?” What did you think about it? Or, what is your favorite fictional weapon in a movie? Let me know down below! Scene Before is your click to the flicks!