“Love, Simon” is directed by Greg Berlanti, who you may know as a producer for a lot of content that’s coming out in relation to DC Comics and this movie stars Nick Robinson (The Fifth Wave, Jurassic World), Jennifer Garner (Juno, Daredevil), and Josh Duhamel (Transformers, Safe Haven). This movie is about a teenage boy who is nearly done with high school and all of his life he’s been hiding the fact that he’s gay. His parents don’t know, his friends don’t know, his family doesn’t know, nobody knows. One day, Simon comes across something online about someone who has never come out, seeing this, he begins communicating with the individual who happens to be just like him. This leads STRAIGHT into this coming of GAYGE story. 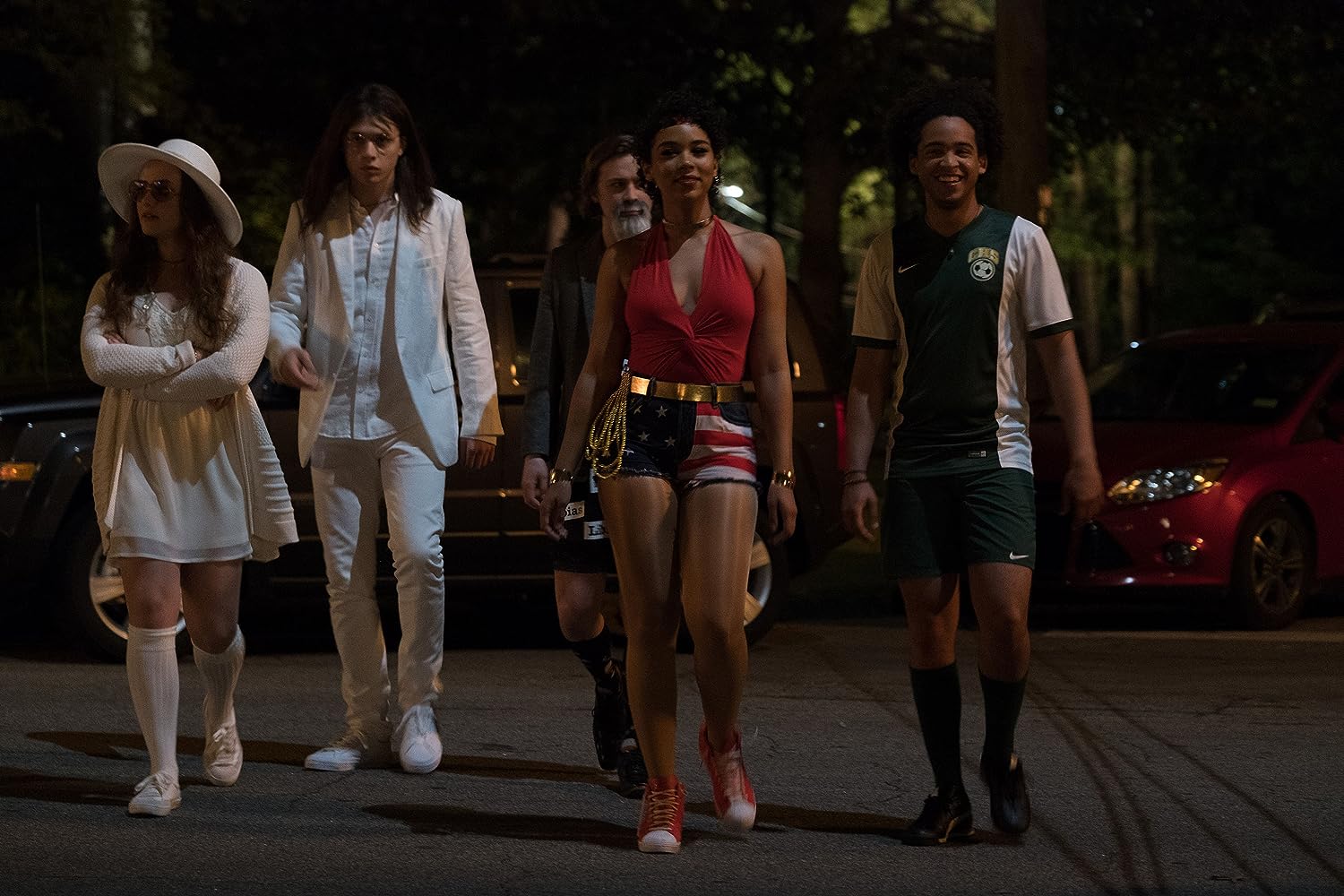 I bought this movie on Blu-ray for 25% less than the sticker price (originally $34.99), and I will bring up the fact that despite its recent release date, I missed “Love, Simon” in the theater. My sister saw it, but on the same day, she was with her own demographic and I was off with someone else seeing another movie at a different theater, specifically “Tomb Raider.” However, when I saw a couple of Blu-ray copies available at a store I went to multiple times while on vacation, I asked my sister if she thought I should pick up this movie, mainly considering how she’s one of the few people I know who saw it. Once I got her seal of approval, I thought I should take a gander at what this was. Having seen this movie now, it’s fine. Just fine. Did I expect it to be great? Not really. I thought it was gonna be really good, and while it didn’t quite MEET my expectations, I can’t say my disappointment levels are enormous, because “Love, Simon” is an entertaining, somewhat fast-moving, enjoyable experience I guess.

Let me just get something straight. I’m straight. I can’t say I completely relate to Simon entirely because I’m not gay, but with ways not having to do with sexual orientation, the writers did a really fine job at making the character of Simon feel like a normal everyday person just like he himself says he is at the start of the flick in narration form. And that is one of the biggest compliments I can give to “Love, Simon,” as a coming of age story, the script does its job (FOR THE MOST PART, THE FLAT-OUT ODD AND OVERUSED SEX JOKES, NOT TO MENTION OTHER CRINGE GOT IN THE WAY). Not only that, but all of the characters around Simon’s age seem to come off as authentic high-schoolers. And I will say, that if I were talking about the first half of this movie, I probably would have a gun to my head while threatened to say what somebody else wanted. I’m not saying the first half was terrible, but certain parts of the first half were not really as lovable the other half. There is some cringe to be had throughout the movie that was rather unexpected.

One such moment comes into play during a scene in a Waffle House. While everyone is reading a play script, A character by the name of Martin, who might as well be young Lex Luthor in “Batman v. Superman,” has a crush on Abby, and it just leads to one of the weirdest exchanges of dialogue I’ve seen in a movie this entire year.

Speaking of cringe, let’s talk about the principal. Ooooh the principal. You know how sometimes maybe you’d think of a school principal as a big, tough, menacing figure? I wouldn’t say that’s who this guy is, I’d say he’s a combination of a clown without makeup, and a f*cking whackjob! Listen, I would sometimes consider myself a horrible person who doesn’t mind talking about sex, I’ll admit it. But in what universe does a principal go up to students and talk about their Tinder date in detail? And this movie also goes to show how ridiculous it’s gotten in terms of people not being able to have control of their own phones in school in perhaps the creepiest way possible! It’s like watching a really bad episode of a cheesy sitcom on ABC. If you remember the movie “Fist Fight,” which I’d honestly be surprised if you do at this point, at least they made the phone controversy that’s going on in schools all over today rather funny!

I already talked about Simon, but when it comes to the way Nick Robinson portrayed this character, I’d say he did a fine job at being authentic, not putting himself over the top, and just acting like a typical teenager. I’ve seen a few other flicks where Nick Robinson happened to be present, but “Love, Simon” is the first one where I happen to see him stand out. I remember bits and pieces of him in “Jurassic World,” I’ll admit it’s been awhile since I’ve watched that movie. I also watched him in “The Fifth Wave,” which was just AWFUL, but his few seconds in that movie worked for me. “Love, Simon” took me from being intrigued into looking for more of Robinson’s work to keeping a good eye on him now.

One thing I’m kind of surprised by when it comes to this movie, and I wouldn’t consider this a huge negative is how tolerant this movie’s list of characters appear to be about alternate orientations. I say this because in real life there’s probably gonna be that one person who either thinks differently than everyone else, or just two sides clashing with each other. While I’m not complaining, this does come off as a shock to me. Although at the same time, considering how much more open-minded we get as a society each and every day, that sort of idea becomes a tad less surprising. When I was in high school, I never really ran into anyone who was flat-out AGAINST homosexuality or the LGBT community, and if there were anyone that falls into that class, no names related to that come to mind. My parents seem to have nothing against said community, some people related to me I can probably tell have nothing against them. I can’t speak for everyone in my family, I don’t discuss this sort of thing with them. Even so, I didn’t expect the world of “Love, Simon” to be so one-sided. Granted, it could be to establish that there are more people that are accepting of the LGBT community than one would think, but still. And also, I will say, despite how many people appear to be on one specific side altogether during this movie, one character, specifically the character Simon is emailing all the time happens to have people who would disapprove of his ways in his family, but other than them, nobody else stands out in that side of the spectrum.

In the end, I gotta say “Love, Simon,” while it did make a neat turnaround in quality as the movie progressed still didn’t have enough in order to make me go “wow.” In fact, while I’ll mention again, the screenplay is one of the better parts of what make up “Love, Simon,” it had too many moments of cringe mixed into all of the decent parts. I didn’t even get into the football field scene which I’m avoiding for the sake of possible spoilers. As a coming of age story, it does its job, but I wouldn’t go all out in saying it does its job well. Plus considering what might be a small potential replay value, an ending that could have worked but had some dissatisfying elements mixed in, and some moments of the movie that might feel forgettable, I wouldn’t say I loved, “Love, Simon.” I’m gonna give “Love, Simon” a 7/10. I have a feeling however based on some thoughts spinning around in my head that I am gonna eventually change “Love, Simon” to a 6. I dunno, only time will tell. Thanks for reading this review! Pretty soon I’m going to post my review for “Game Night,” which I do intend on watching sometime this week. Be sure to look out for that, make sure you follow me here on Scene Before that way you can stay tuned for more great content! I want to know, did you see “Love, Simon?” What did you think about it? Or, what is one of the most cringeworthy movies you’ve watched in recent memory? Let me know down below! Scene Before is your click to the flicks!