Hey everyone, Jack Drees here! As some of you may or may not know, one reason why I continue to work on this blog to this very day is for my own joy of writing. And I’ll have some of you know that one day, I would love to work for the film industry. As of today, my hopes to do such a thing has dwindled to a point where I’ve entered an abyss of darkness. Don’t get me wrong, I’d love to work in the film industry, but it doesn’t change the fact that something has gone on in the film industry that is getting me so fed up that it’s making me almost steer away from even considering said industry to relate to my future career.

And yes, there are tons of things about the film industry that can totally be a reason for me wanting to steer away. There’s tons of sexual harassment scandals that almost makes it hard to be a straight white male in Hollywood. I’m not saying I sexually harassed others or approve of sexual harassment, but what if we get to the point where you just get called out for being a straight white male? All of the fan communities for movies like “Star Wars” are becoming more and more toxic by the day. Depending on your housing situation, you’ve also got to deal with California itself. I mean, my gosh! How are people surviving there? But we’re not gonna talk about any of those topics today. Today, it’s time for me to get personal, because a story just came out last week that kind of got on my nerves.

One of my all time favorite TV shows is “Family Guy.” Sure, the series is nowhere near as good as it used to be, but the early seasons of the show are a thing of beauty. And admittedly, I’ll say I enjoy some of the later episodes as well. Seth MacFarlane is a genius that breaks barriers and can easily make me laugh. Some of his other work such as “American Dad!” and “The Orville” are also worth a look if you ask me. “Family Guy,” for those who don’t know, is currently owned by Fox, and they also own a couple shows that have a similar feel to “Family Guy.” These shows include “The Simpsons” and “Bob’s Burgers.” Recent reports came out related to all three shows, and there are two of these reports which I can approve of.

Those first two topics? They’re irrelevant, forget em’, they’re safe from my rant. That last one however, I’m taking it down with force! Just… Why? In all of the years, that I’ve been asking for a “Family Guy” movie, THIS is the idea we get? When the word live-action comes into play for something that’s rather well-known for being animated, that’s usually not a good sign. It has enormous potential for “Transformers,” but everyone making some of those movies tend to puke on their audience in the process. But let’s look at it this way, there are many live-action adaptations of animated pieces of work out there. Some admittedly have worked like 2016’s “The Jungle Book,” while others continuously remain in a pit of terror like “Ghost in the Shell.” If experience has taught anything to a number of active moviegoers, it’s that animation doesn’t always translate to live-action.

When it comes to Fox and the development of the movie, that’s an interesting situation as well. If you have been living under a rock, Disney could potentially own an enormous portion of Fox’s assets. The Mouse House bid on all of said assets for a grand total of $71.3 billion, with studio approval happening on July 27th of this year. As of now, the ownership isn’t a done deal, because there are still some ropes to jump through with the government, but if this deal goes through, it’s potential that Disney could step in and change this movie. What will they do with it? I don’t know, but I just hope they don’t make it too kid friendly! But nevertheless, this could lead to studio interference and maybe take a movie that I’m already not anticipating, and somehow make it worse.

Although the more I think about it, something like this is potential to work, maybe. Live-action is something that I don’t know if it will work, but if it’s done right like if somehow the Griffins become realistic and can’t find a way to return to their normal selves, that could be interesting. Maybe it’ll be something similar to “Who Framed Roger Rabbit.” And I think some people liked another piece of work from Fox, “Son of Zorn,” which had an animated character in our world. But that was canceled so what do I know? But other than that, the whole concept just sounds crazy. It almost reminds me of another cartoon that tried to make a movie like this. You guys remember “The Spongebob Movie?”

In 2015, they released another movie featuring “Spongebob Squarepants” known by the name “Sponge Out of Water.” Down below is an image taken from that movie.

Now, don’t get me wrong, would I personally say this looks TERRIBLE? I wouldn’t say it does. But in reality, it’s just a gimmick. I haven’t seen the movie, so I can’t say too much, but blending the live-action and animation together just feels like a cheap trick. Not to mention, based on how this movie was marketed supposedly, it feels like it was made to show off 3D.

Knowing Seth MacFarlane and what he would probably do, I doubt he would use 3D gimmicks up the wazoo. I wouldn’t be surprised if this movie were in 3D, but I don’t think MacFarlane would intentionally go out of his way just to make 3D a big part of the movie. I don’t know, maybe unless he wanted to make fun of “Avatar” he wouldn’t do such a thing. 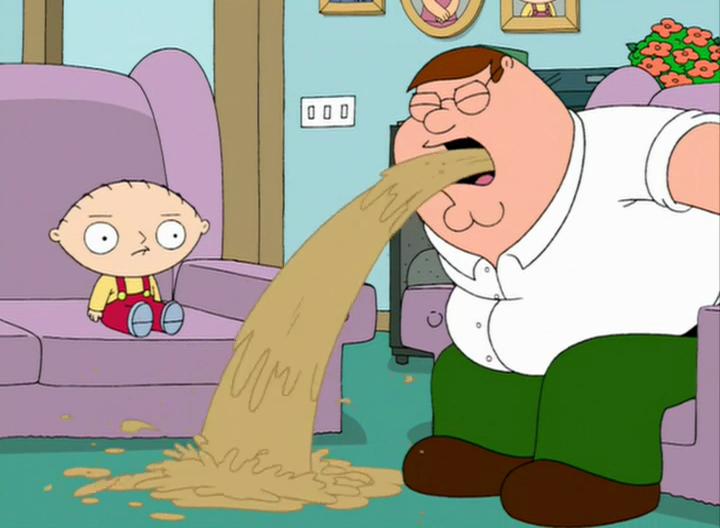 I’m not gonna show this for certain reasons having to do with value, idea stealing, and the fact that I would like to present it to particular people and hide it from others. I HAVE A SCRIPT FOR MY OWN “FAMILY GUY” MOVIE. When it comes to making this script, I actually started it two years ago, and it is a fully animated movie. I find it to be a combination of a big blockbuster and drama with a ton of comedy sprinkled in the mix. I finished the climax recently and I am rather proud of what I created. There are definitely revisions to be made to the script overtime and I’m still looking over it as days go by. In fact, I wrote it on a Word document, and it’s not even formatted like a traditional script! But it did come out to over a hundred and twenty pages!

I gotta ask, is my movie better than whatever Fox or Seth MacFarlane has in mind? I may be biased, but yes! Then again, this is judging both movies on paper. We have yet to see either of our ideas to come to fruition. And when either of our ideas come to life, we can only properly judge our creations at that point. You may be asking though, what’s the plot? I said I don’t want to talk too much about my ideas, but I’ll spit some words out here. The plot of “The Family Guy Movie” is that Quahog is invaded by an alien race. It turns out that the race not only captures humans, but it is their only food source as well. This turns into a dark drama, eventually met with a lighter tone of the Griffins, Swansons, and Quagmire’s dad coming together to gain superpowers, and rescue those they need to rescue. Oh, did I mention there’s a point where the world is at stake?

“I don’t want to do ‘The Griffins must save the world.” -Seth MacFarlane

You don’t want to? Well guess what? It’s my script, so I’LL do that. Besides, that’s not even the main portion of the movie. The main portion of the movie is saving certain characters whose names shall not be mentioned for the sake of avoiding spoilers. And if you guys are asking if this is REAL, I can assure you it is. Now I’m not sending out any links to it, taking no screenshots of it, I’m not doing such a thing. I’m one of the few people at the time of writing this who knows about it. If you want, I can actually share some of the lines I’ve written in the script. I’ll try to be as spoiler free as possible. I’m not going to right now because I want to still hide my script details. But if enough people comment, I’ll happily share what I’ve written. I don’t know if I’ll update this post and do it here, or do something separate or what, something will likely happen. But let me just say, if this “Family Guy” movie doesn’t go according to plan, I’m gonna feel bad for those who are making it, but I’m also going to continuously remind Fox and Seth MacFarlane that they could have possibly gone with the script written by a teenager! And for once, maybe someone like me won’t be mocked for making such a thing happen. 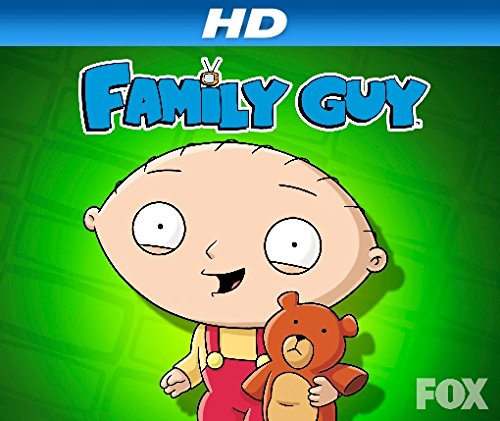 Thanks for putting up with my rant about my dreams getting crushed. I don’t know what the absolute future of the talked about “Family Guy” movie will be. There’s a part of me saying I hope it’s successful and there’s another part of me saying, just go with my script, trust me. I’ve worked on it for two years. I’m sorry to say but I have no review coming this weekend (as far as I know, maybe I’ll see something from home) but I do have a post coming soon that is going to be a review of my time at this year’s Terrificon. For those of you who are unaware of this event, it’s a three day convention taking place at one of Connecticut’s casinos, Mohegan Sun. I will be attending all three days and it will feature guests including Pom Klementieff (Guardians of the Galaxy Vol. 2, Oldboy), Khary Payton (The Walking Dead, Teen Titans Go!), the guys from AMC’s “Comic Book Men,” and much more! I will be going over any potential autographs, photo ops, what the atmosphere was like, and it might be a tad different than last year considering they’ve got a new space in a recently constructed expo center so that will be a lot of fun. If you are considering coming to Terrificon, I’d say it’s worth your time, it’s not the best convention I’ve been to personally but crowd-wise, it’s paradise! I doubt there will be long lines for autographs! Be sure to stay tuned for that and more great content! Also be sure to follow me either via email or a WordPress account! I want to know, what are your thoughts on a “Family Guy” movie that blends live-action and animation? Or, are you excited for a “Bob’s Burgers” movie or another “Simpsons” movie? Let me know down below! Scene Before is your click to the flicks!