Oh boy! A new “Sharknado” movie is out! Time to suffer once more– wait, this is the last one? I should hope so… But just in case…

NOW NO REBOOTS, PLEASE! Unless there’s some sort of plan to unleash quality towards the “Sharknado” franchise I AM NOT GOING TO ACCEPT ANY OTHER MOVIES UNDER THE “SHARKNADO” NAME! UNDERSTAND?! This franchise can rot in hell with the live-action “Smurfs,” “Fifty Shades of Grey,” and as much as it pains me to say it, just about half of the “Star Wars” movies, I’m done with “Sharknado!” I’m done! Man that felt good.

I still have to review the sixth one, cra–

“The Last Sharknado: It’s About Time” is directed by Anthony C. Ferrante, the director who also unfortunately helmed the previous five “Sharknado” films. This movie stars Ian Ziering (Beverly Hills, 90210, Godzilla: The Series), Tara Reid (American Pie, The Big Lebowski), and Cassandra Scerbo (Make It Or Break It, Not Another Not Another Movie) and is marketed as the supposedly final “Sharknado” installment ever. This time, Fin and his pals are time-traveling to rid of the damages of nasty Sharknados in the past.

I’ve seen all of the “Sharknado” movies in at least one way, shape, or form. I’m not gonna go into specifics since I’ve already done such a thing in my “Sharknado 5” review and I just don’t want to sound repetitive. Let me just say, I’ve seen all of them, I don’t like any of them. End of story. Here’s the thing about certain good intellectual properties or movie franchises that seems to stand out to me. They all know when to stop. “Back to the Future” stopped at three movies! Director Robert Zemeckis said “over my dead body” on the thought of a reboot. You’ve also got “The Dark Knight” trilogy which had a solid beginning, middle, and end. Back before the “Star Wars” prequels released, the original “Star Wars” trilogy stopped at three movies, all of which have been appreciated by fans and critics (unless you count “The Empire Strikes Back” when it first came out). And no, the holiday special is not in this discussion. Franchises like “Sharknado?” It just keeps on going. Granted compared to some other franchises it does have some benefits. Depending on the situation, you are more likely to watch “Sharknado” for free whereas you have to pay $12 to go see the new “Transformers” movie. The movies are around an hour and a half compared to certain titles like “Fifty Shades of Grey” or “Twilight” which are around a couple hours long. Those are just a couple of perks throughout what can truly be regarded as a s*itfest of an experience.

It honestly baffles me why people watch these movies. The only reason why *I* watch these movies is to give you guys a review. And as much as I suffer during the movie, I do look forward to the review. This has the worst that a cheesy bad movie has to offer. It says it’s big in quantity but it lacks quality! Stupid cameos! Moments that make me lose IQ points! I don’t understand why, other than the fact that they get high ratings on Syfy, that the “Sharknado” movies have to keep on happening. As the movie begins, and we start to get reintroduced to characters along the way, I just remind myself of how much I don’t care about anyone in the franchise. Granted, I will admit in my “Sharknado 4” review, I mentioned I cared more for the characters in the first movie. But there are some things to consider: I was just getting to know them. It wasn’t known to me that Ian Ziering would practically be god in these movies. Not to mention, since it was the first movie, I didn’t have to complain that I’m seeing these f*cking hooligans again.

One thing I want to talk about before moving onto the characters is something I cannot even believe I haven’t brought up in any of my reviews yet. Throughout the movie, I couldn’t help but think to myself that the color grading is some of the worst ever put on screen. When I watch “Sharknado,” I do expect a natural disaster, and granted, natural disasters are depressing, therefore meaning maybe a depressing color grade might work. However, “Sharknado,” a movie where Ian Ziering jumps into a shark with a chainsaw and escapes with no problem whatsoever, a movie where many intellectual properties are butchered by insanely forced references, a movie that needs to have some stupid promotion for Xfinity or The Today Show, does not associate with that type of grading! This movie, if it truly tries and cleans up its s*itty effects, can be a buttload of fun. I can also say the same if it just changes the color grading. I feel like there are way too many blacks in the images to the point where it feels like I’m watching a World War II period piece or something. This movie’s color grading almost made it feel like I was staring at very dark cigarette smoke with sharks behind it. Just brighten the images a little bit! A little color makes a big difference!

I also really don’t like the direction of this film. I clearly watch more movies than TV. And I’m almost picky when it comes to TV shows, partially because I don’t review them. But this movie at times reminds me of two very similar shows that are incredibly popular that I don’t watch. Specifically, “The Office” and “Parks and Recreation.” I don’t watch either of those shows because the way they’re shot is almost headache inducing. The whole style of footage containing actions suddenly interrupted by an interview is almost distracting to me. Not to mention, the camera is constantly shaking whenever something is being shot unless we’re talking about an interview. It’s just annoying. Some may say it’s immersive, it honestly does the opposite for me. And speaking of shaking the camera, there are some minor shakes I witnessed, most noticeably during an establishing shot of a sharknado! WHAT HAS THIS WORLD COME TO?!

Moving onto characters, let’s talk about God–err I mean Ian Ziering. He’s basically what you’d come to expect at this point. He survives everything. He is the biggest badass on the planet. Essentially if Domenic Torretto had hair and had to deal with sharks all the time, that is Ian Ziering’s character. Oh yeah, right, he has a name, Fin Shepard. WHY AM I STILL TALKING ABOUT THIS?! 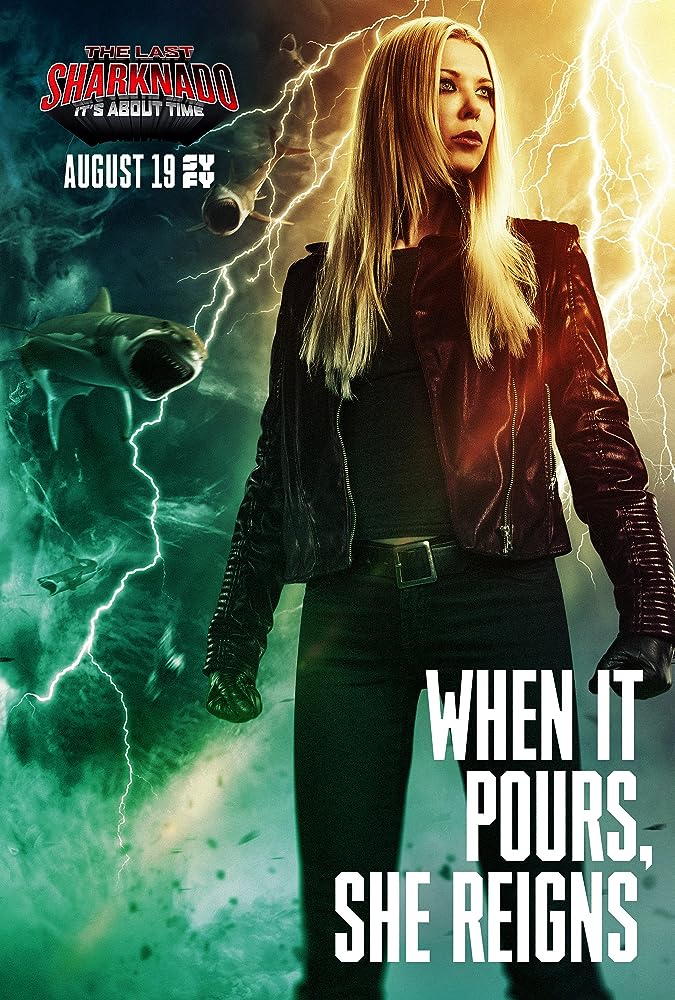 One thing that I found interesting about this film however is that with the time travel element in play, we managed to see the adult version of Gil. For those who don’t know who Gil is, he’s a very young kid that April and Fin have. And while I can’t say much of anything positive regarding the characters of this movie, I will say that Gil was a lot less annoying than he was for the past couple of installments. Then again, what do you expect? He’s an adult.

I don’t even know why I’m still writing. My head is honestly about to explode, but just like all of the other “Sharknado” films, “The Last Sharknado” doesn’t shy away from giving you the film industry’s worst examples of how to do special effects. You know how a lot of people look at the shark from Jaws at find it to be very fake-looking? Look, if I was thirteen, THAT F*CKING KILLER SHARK FROM “JAWS” WOULD HAVE BEEN MORE BELIEVABLE THAN THE HUNDREDS OF SHARKS FLYING IN YOUR FACE IN THIS PIECE OF CRAP!

Let’s talk about the ending. I am not a mega-fan of the franchise, and you know what? If I were a mega-fan, then I probably would have appreciated it more. But in all reality, I was just kind of checked out. Then some of the last lines come in and I’m just begging to get on with my life and do something that’s worth my time. The movie, and the franchise, THANKFULLY ends. That’s one of the few, and there a few, positives in the entirety of “The Last Sharknado.” It ends the saga. It’s… over. It’s f*cking over. But I gotta say, I was kind of angry (partially due to my bad mood received from watching this movie) that I had to see a text card come up with the word “Fin.” You’ve already destroyed my brain, you don’t get to do that, movie! Bad movie! BAD movie!

As we get closer to my final verdict, I have to point something out. As I’ve done with “Sharknado 4” and “Sharknado 5,” I was livetweeting to this movie during the premiere on Syfy. Here are some of the tweets I’ve made:

Someone shoot me… Wait, I might already be dead. #Sharknado #Sharknado6 #TheLastSharknado #SceneBefore #NerdArmy https://t.co/DCrKEgJqbh

This might be the least believable boat set in a movie. I'm DONE. #Sharknado6

Yes, one is more related to Instagram, but it’s on Twitter, so who really cares? Since I’m a movie reviewing moron, I wonder if some people would think I know way more than I should know about film. And maybe I do. Maybe it’s unimportant that I know that every “Sharknado” film was directed by Anthony C. Ferrante. Why should that even be something worth bringing up in a casual conversation? Let me just say, that name confuses the hell out of me. Because he was observing the livetweet session and those tweets I just put up? HE RETWEETED THEM! So I went to look at his account, and see what other tweets have been posted, and while they are related to “Sharknado,” they all seem to be on the positive side of the spectrum. Does Anthony hate his own creation and side with me? Does he not know what to think of it? I NEED TO KNOW! Anthony Ferrante? If you’re reading this, if you hate your movies, it’s OK, we can talk s*it together!

In the end, I may have been excited to do this review just because I can rage out about a s*itty movie and sometimes that’s rather fun, but this review is not all fun and games. Watching “Sharknado 6” was one of the first things I did once I got home from vacation. And by the way this vacation was comic-con, which involves a lot of walking. It was fun, but it does feel like a workout at times. Instead of coming home to relax and unwind, I decide to review this s*it. But hey, it’s over! So, goodbye “Sharknado,” you won’t be missed! I’m gonna give “The Last Sharknado: It’s About Time” a 1/10! I mean, what else do you expect? I mentioned there are a few positives in the movie, but it doesn’t make all of the infinite negatives go away! This movie had a nice animated intro, had one moment where I chuckled, and most importantly, ended everything. But seriously, WHY WAS NEIL DEGRASSE TYSON IN THIS MOVIE?! And just to stay positive, I will say that this actually was better than “Sharknado 5.” They toned down on Xfinity, and it didn’t have an annoying kid. And best of all, this movie means the series… is over! Thanks for reading this review! Pretty soon you’re gonna get some more posts coming your way. These include movie reviews on “The Hurricane Heist,” “Love, Simon,” and my look back at my time at this year’s Terrificon! Be sure to like this post and follow my blog so you can stay tuned for more great content! I want to know, did you see “The Last Sharknado: It’s About Time?” What did you think about it? Or, do you think we’ll ever see another movie, TV show, or video under the “Sharknado” name again in the future? Let me know down below! Scene Before is your click to the flicks!