Hey everyone, Jack Drees here! This Friday, there will be a new movie out called “American Made.” It stars Tom Cruise, it’s directed by Doug Liman (The Bourne Identity, Jumper), and it’s not the first time these two are teaming up together. They worked on “Edge of Tomorrow” together. By the way, an “Edge of Tomorrow” review isn’t going to be done now or anytime soon, if I had the movie I’d probably look at it and review it, but I don’t. Also, good movie, check it out. Anyway, this review is the last installment of my past Tom Cruise movie series, so far I’ve done reviews for “The Last Samurai” and “Risky Business.” What’s my last movie? If you’re seriously asking that, look at the freaking title! But seriously, today I’ll be reviewing “The Firm.” After watching this movie, I have a good number of things to talk about, so let’s get to it!

“The Firm” is directed by Sydney Pollock (Tootsie, Out of Africa), and stars Tom Cruise, Jeanne Tripplehorn (Waterworld, Basic Instinct), and Gene Hackman (Superman, The French Connection), and revolves around the character of Mitch McDeere, a young lawyer who went to Harvard who goes to work at a firm which he soon discovers has a dark side. 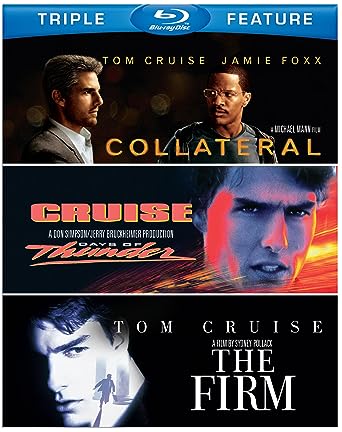 For the record, this is the first time I watched “The Firm.” Last month I got a Triple Feature Blu-Ray pack featuring three Tom Cruise flicks: “Collateral,” “Days of Thunder,” and this one. When I told my mother I was watching this movie, her reaction almost sounded like she founded the Fountain of Youth. She loves this movie, and she also loves the book. By the way, the book is written by John Grisham, writer of novels such as “The Chamber,” “Skipping Christmas,” and “A Time to Kill.” After watching “The Firm.” I don’t know what to think. Part of me feels the need to read the book, and I don’t mean that in a positive way. “The Firm” made me rather want to take a bar exam as opposed to watching the movie. Before we dive into negatives, let’s dive into some positives.

The cast for “The Firm” is undoubtedly outstanding. Tom Cruise is, well, Tom Cruise. This isn’t really his best performance, you can still see a bit of Tom Cruise himself while watching this, but you can totally buy into his character. Jeanne Tripplehorn as Cruise’s wife, Abby, does her job well, the chemistry between the two is believable and there’s a scene that personally stands out. Although admittedly I didn’t really care about their relationship in the end, which I will come back to. Gene Hackman was also pretty good as the character of Avery. Also, some of the supporting characters are played by respectable actors who gave good performances throughout the picture. For example, Holly Hunter (Raising Arizona, The Incredibles), she played he character of Tammy Hemphill, Hunter’s performance delivered a lot of charm. It almost sounded fantastical and was almost shot up the sky high enough to reach over the top territory, but it doesn’t mean it wasn’t charming. Hunter’s performance was also nominated for an Academy Award by the way. One of my biggest surprises I encountered during the movie’s runtime is that Gary Busey (Point Break, Lethal Weapon) has a role in it. His performance is definitely one of the best in the entire movie and it was aced from scene one. He’s barely in it, but if you check this movie out, look forward to Busey.

The cinematography for this film, while somewhat conventional, was pretty good. This was shown during the scene towards the end of the movie with Tom Cruise running, which I personally like because it doesn’t really do any quick cutting or jumpcutting or anything like that.

Now let’s dive into my first negative of the film, and this is something which if you have seen the film, you’ll probably disagree with me on, and that is the music. Here’s the thing about the movie’s music, at times, it meshes well with the movie, but at other times, it could have been altered. In fact, the film is using a piano in a lot of it’s music, the way the piano’s being used almost reminds me of a silent film. If you like the movie’s music, that’s great! You’re allowed to like it, but it really just didn’t flow that well at times. On a sidenote, one reason why I brought up the possibility of you disagreeing with me on the music is because it received an Oscar nomination. By the way, the composer of this movie’s music, Dave Grusin, is also the composer of music featured in various films which came out before this one such as “The Goonies” and “Tootsie” and Grusin also happens to be the musical composer of various films which came out after this one such as “Hope Floats” and “Selena.”

Also, the pacing of this film seems to be all over the place. I don’t know about you, but I felt like I was watching a completely different movie than my mother (refer to third paragraph). While this is mainly a thriller, it almost felt like it wanted to focus a lot as a romance film. It almost felt like it wanted to be two different movies at once. Now don’t get me wrong, films that are about something in particular can have romances interjected in there, but this romance almost felt like unnecessary filler at times. Not to mention, I almost didn’t care for anyone because the movie itself bored me at times. There’s a moment where it becomes interesting, then it just goes back to the slow-paced borefest I was already used to. The runtime is 2 hours and 34 minutes long, I’ve witnessed longer films that are better than this, also to be fair I witnessed longer films that are worse than this. As someone who hasn’t read the book, this makes me kinda curious, why is the movie this long? I did a Google search and I found out that the book is 412 pages long, and part of me wonders how much of this movie was taken from the book. Was everything taken from the book? Was everything that was considered “necessary” taken from the book while other stuff was left behind? I kind of want to know. Although with school and everything I don’t really have much time to sit down and read right now, not to mention, movies are more fun! Sorry, books! I’m not saying the movie should completely eliminate the romance which is included in it, but the movie honestly, as a whole, feels convoluted. If it removes various things from the film, things I can’t really come up with right now due to my boredom making my brain lack material from this movie, it might be a better movie.

Before we get into the section where I deliver my verdict, I have a rather humorous story to tell you. I only watched “The Firm” once, meaning I only watched it for this review. I have a Twitter account, by the way, the handle is @JackDrees if you’re interested. On that account, one thing I do occasionally is promote my upcoming material here on Scene Before. When I promote my upcoming material, one thing I would usually do is search for GIFs, otherwise known as the video file that might as well have started a pronunciation war. When I search for GIFs, I try to find footage of something that correlates to the focal point of a post. For example, when I reviewed “Risky Business” as part of this Tom Cruise series, I searched for GIFs related to that, and in a couple promotions I went with a GIF which had Tom Cruise sliding across the floor in his underwear. Now when I decided to review “The Firm,” I went searching for GIFs right away. I typed in “the firm” and “the firm tom cruise.” Both times, I got GIFs featuring Tom Cruise, then I chose the first result. I didn’t even know what it was, it had Tom Cruise in it though, I thought it was good enough because I needed something to promote my review for “The Firm” which you are reading right now. So I inserted the GIF, tweeted, and soon started watching the movie. About an hour or so in, I go to Twitter, and I have a notification waiting for me. Some user I don’t even know who goes by the handle @MrsPetitions replies to me saying “This is from Rain Man though

.” First, I’d like to thank @MrsPetitions for the little factoid. Second, I’ve never seen “Rain Man,” so if you’re going to accuse me for my lack of movie knowledge, just be glad it’s not from a movie I’ve seen or a movie that doesn’t have Tom Cruise in it. Third, upon review, there were barely any GIFs I saw for “The Firm” whatsoever. Fourth, this almost set the tone for the movie. It’s almost like Twitter suffered brain damage and immediately forgot what “The Firm” was, you know, kind of like me right now. This movie is forgettable. 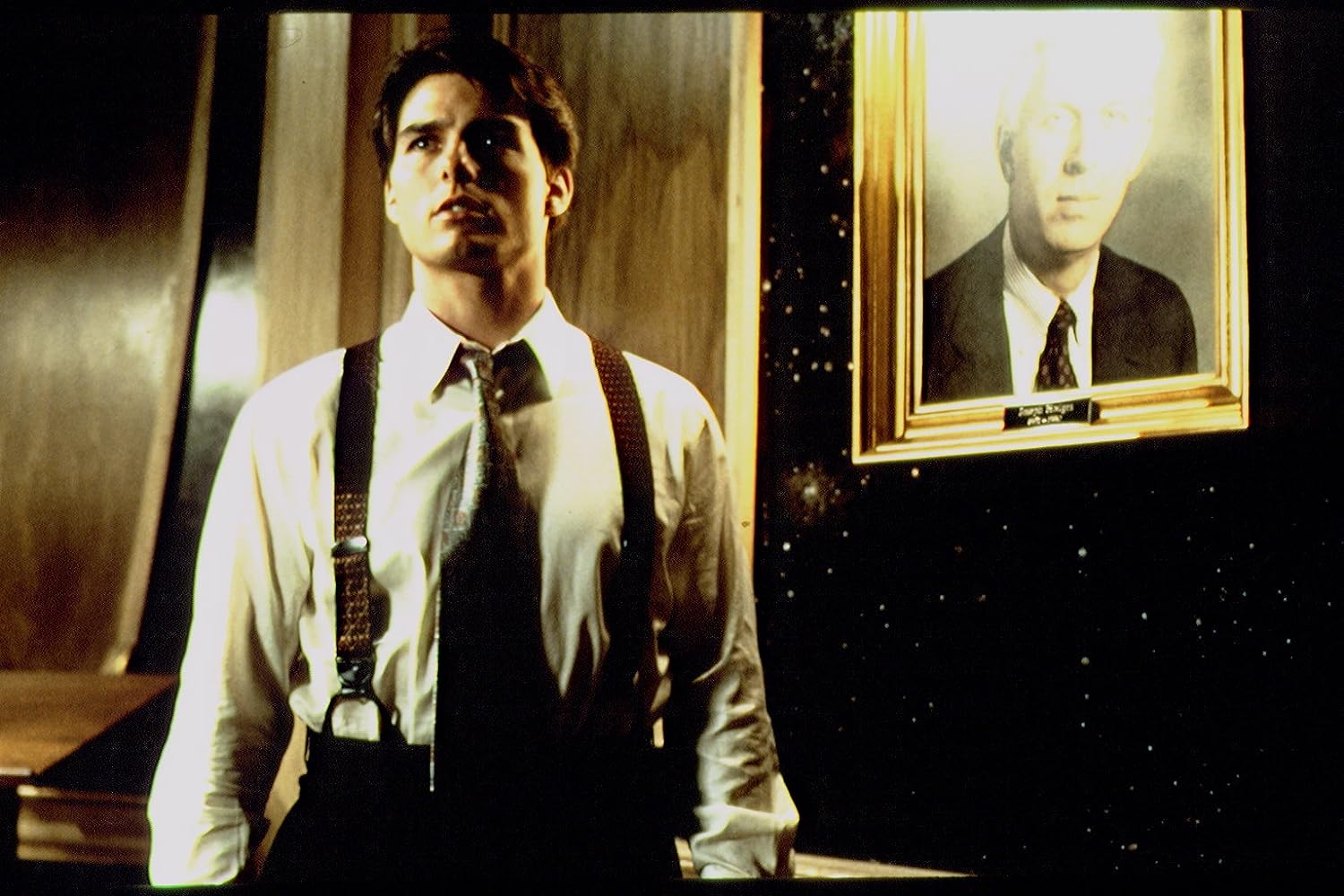 In the end, “The Firm” was disappointing. I went into it with, not necessarily high expectations, but based on my mother’s thoughts towards the movie, I was expecting it to be good. I like the cast of the movie, sometimes the dialogue works, the cinematography isn’t all that bad, the film does look presentable, but there aren’t really many qualities that stand out about this film. “The Firm” got some things right, but ultimately needs some improvement. Is the book any better? I don’t know, I never read it, but it will be some time before I come back to this film unless I need something to fall asleep to. I’m gonna give “The Firm” a 5/10. Thanks for reading this review, that’s the end of this Tom Cruise series, I hope to see “American Made” this weekend or some other time soon. I’ll also have you know this Wednesday I’ll be seeing “Kingsman: The Golden Circle,” which I’m really excited for. As far as other upcoming movies go, I’m desperately hoping to catch “Blade Runner: 2049” on opening weekend, but I don’t know whether or not that’ll happen.

Also, I want to let you know that in the future I do have other reviews in mind for past movies, for example, next month I’ll probably review “Thor” and “Thor: The Dark World” in preparation for “Thor: Ragnarok” which comes out November 3rd. If you have any movies in mind that I should review for one reason or another, let me know about it and I’ll keep it in mind. Also, if you want to check out my other entries in this Tom Cruise review series, links to those are down below if you want to read those posts! Stay tuned for more reviews! Scene Before is your click to the flicks!