Hey everyone, Jack Drees here! In case you didn’t glance over the entire title of this post, this post is a bit unsuitable for younger viewers. This involves masturbation, so if you let your children read this blog, let them read at their own risk, otherwise, enjoy reading this! So, where was I? Oh yeah, right. Based on my recent reviews, my brain is scarred! I’m still alive, but I feel appalled. I recently reviewed “The Emoji Movie” and “Sharknado 5: Global Swarming,” I want something good to review! Speaking of terrible films such as “The Emoji Movie,” we’re actually going to talk about it. Not about the movie, not about its poor reception, not about how it’s an abomination against humanity and how it literally is a disgrace for solely existing, we’re gonna talk about one specific moviegoer who, let’s just say, “had some fun” at “The Emoji Movie.” I can’t freaking believe I’m saying that!

Alright ladies and gentlemen, let’s dive into New Jersey, a US state with towns that have fascinating names including: Mahwah, Paramus, and Hackensack. There’s a theater called Xscape located in the town of Howell, a less interesting name, where the event of focus here occurred. During a showing of “The Emoji Movie,” “a white, heavyset man in his 20s or 30s” was one of the members of the audience during a showing on Thursday, August 3rd, and hopefully one of the ONLY members of the audience. There was also a woman there with her children, she noticed the man with his pants unzipped, stroking himself. 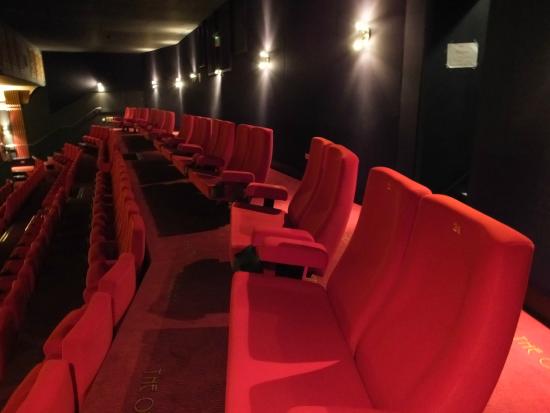 According to the woman there at the scene, she said the man “was seated alone in the back row of the theater.” If you ask me, you shouldn’t masturbate in a movie theater, especially if it’s a family film we’re talking about here, but I’ll give credit to the man for sitting in the back so nobody had to be distracted by him from behind. Nevertheless, despite what was said about this man being in his 20s or 30s, it turns out the man was actually 43 years old. His name is Abraham Parnes and he was charged with lewdness and left on a summons. You know what he didn’t leave with? A refund for his ticket for “The Emoji Movie.”

In all seriousness though, before the arrest occurred, the manager was aware of all this. The woman actually reported the incident to the manager, the manager came into the theater and told the guy to leave. Once the woman got home, she called the police, and the police eventually arrested the man.

There are multiple things that happen that very rarely take place, or might even occur only once, and remain that way. There’s only one time the Arizona Diamondbacks won the World Series, not to mention there’s only one time they even made it to the World Series at all. Jimmy Carter served as the US president for only one term. The TV show “Firefly,” which is now beyond revered among the nerd community, only lasted for one season on FOX. Multiple things seem to happen only once, and never again. Masturbating in movie theaters IS NOT ONE OF THOSE THINGS.

JOHNNY OLEKSINSKI (New York Post): “Hear that? It’s the end of the world.”

MARA REINSTEIN: (MaraMovies.com): “Excuse me while I scan my phone for the vomit emoji.”

I will say, I never masturbated in a movie theater, I mean, why would I do that?! I’m there to watch a movie, not jerk off! If I went to a theater with the intention to jerk off, that would probably be a porn theater! Although chances are I can’t really go in one of those because I’m not eighteen yet. Plus I don’t even think any places like those even exist in the first place! I can imagine some theaters thought it was fine for some people to jerk off during films like “Showgirls” or “Fifty Shades of Grey” or “Secretary” or “Magic Mike.” OK, maybe I’m going too far with that, maybe they didn’t think it’s “fine,” it would likely get the seats wet but maybe they thought it was somewhat, well, let’s say, “understandable.”

I could ask if you have ever done anything dirty in a movie theater but that just seems extremely eccentric, so instead I’ll ask this. What is the weirdest thing you’ve witnessed in a movie theater? It could be anything, it could be a movie, it could be anything in the bathroom, it could involve a person, anything. Let me know in the comments! Also, be sure to check out my review for “The Emoji Movie!” I have the link for it below if you want to check it out, it’s a good read! Another thing I’ll state is that I don’t know what I’ll see next, I do have intentions to see “The Glass Castle,” hopefully I could see something before next weekend because I’ll be at Terrificon in Uncasville, CT! If you’re at the Mohegan Sun casino and happen to recognize my face from August 18-August 20, be sure to say hi if you want to! Also if you want more info on the convention itself, I have a post dedicated to it that’s essentially a preview. Tickets are still available for the event although if you want tickets for it, get them quick because Saturday and Sunday tickets are selling fast, not to mention, the convention is less than a week away! Stay tuned for more posts and reviews, and I hope I can see something soon, even if it’s worse than “The Emoji Movie!” Scene Before is your click to the flicks!