So… it’s come to this. “Sharknado 5: Global Swarming” is directed by Anthony Ferrante, who also directed the first four “Sharknado” installments. This movie stars Ian Ziering (Beverly Hills, 90210, Godzilla: The Series), Tara Reid (The Big Lebowski, American Pie), Dolph Lundgren (The Expendables, Universal Soldier), and Cassandra Scerbo (Make It or Break It, Not Another Not Another Movie). I could tell you that this movie is about stupidity and leave at that, but since I attempt to put a lot of effort into my reviews, perhaps more than various films I watch, I’ll dive into the plot. The plot is that the whole shark-tornado phenomenon has gone global. This all starts in the city of London, where our heroes are meeting with NATO, unfortunately for Ian Ziering and Tara Reid’s characters, they lose their son, Gil. Now in order to save him, they must travel into a sharknado (laughs). 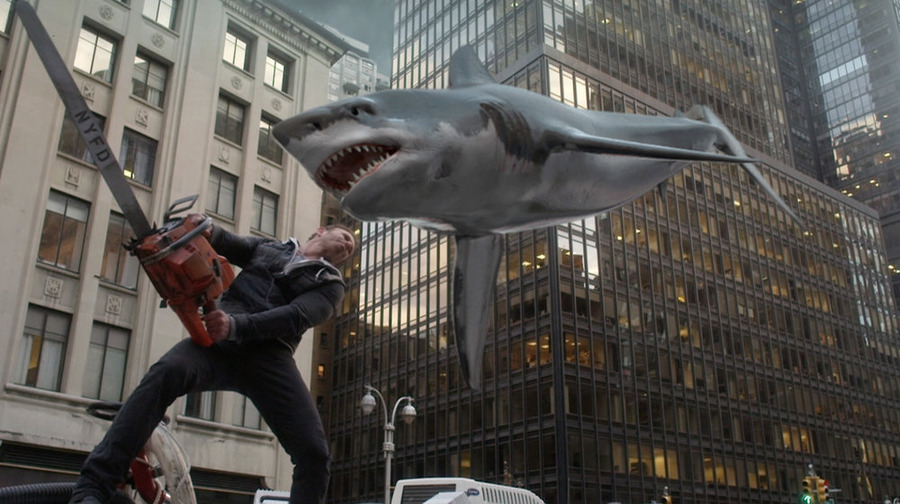 I’ve watched multiple installments of “Sharknado” before, in fact I’ve actually reviewed “Sharknado 4: The Forth Awakens” when that came out. What did I think of that movie? Well, it was a piece of s*it. And you know something? The same can be said about “Global Swarming.” “Sharknado” is a franchise I know a number of people like… for some reason. They know it’s cheesy, they know it’s bad, but they still enjoy it. What do I think? I can’t stand it. To me, “Sharknado,” as far as movies on TV go, is like the “Transformers” franchise when it comes to movies you see in the theater. Only difference is that I can find enjoyment out of “Transformers.” Although when I saw the fifth one, I was kind of just done with it. Now that we have FIVE “Sharknados,” I’m just BEGGING to Syfy to just bury it in the ground. I get this is a TV film and it’s kind of meant to be cheesy, but there’s so much that is happening, so much that I complained about while watching this crap that it literally destroyed my mind afterward. Down below I have an actual tweet from my account that I posted last night, moments after finishing “Sharknado 5.”

My official reaction to #Sharknado5 pic.twitter.com/tym0VM5UcK

Also, I livetweeted through this s*itfest, much like a great portion of people who own a TV, here’s some of my tweets:

Whoever that little boy is, screw him, I want him dead. He is one of the MOST ANNOYING characters I've ever seen in ANYTHING. #Sharknado5

IF THAT KID DIES, I'M GONNA BE SO F*CKING HAPPY! #Sharknado5

45 minutes in, including commercials, my head hurts. #sharknado5

EVERY SINGLE SCREAM IN THIS SERIES IS THE FAKEST THING I'VE EVER HEARD. It's faker than anything one would consider "fake news." #sharknado5

Want to watch this movie? If you said no, I wouldn’t blame you. Anyway, let’s talk about the characters. That is if, they’re actually characters, to me they’re really just people written, I’m sorry, I mean, SCRIBBLED on a page for the sake of making a so-called story.

We’ll start off by talking about April, played by Tara Reid, one of the only positives in the entire movie, and possibly the franchise, only because she’s hot. Although then again, saying that is almost like saying that I’m dating the best girlfriend in the world because she’s the best looking woman I found on, I don’t know, Tinder or something, and she’s great at sex. But in reality, my girlfriend has no personality, just sex appeal. Well I guess my girlfriend’s actually not that great then. Other than that, I don’t care about her, I can’t really relate to her, I just literally wanted every character in this film to die. Although one plus I can give April is that she didn’t ruin the “Star Wars” line “May the force be with you,” once more. All the other things I remember about her character is that she is basically an 80’s humanoid at one point, and she does all sorts of shark-killing s*it. What else is there to remember? Oh my gosh, I’m GETTING A HEADACHE WHILE WRITING THIS REVIEW! I DON’T THINK I’M KIDDING WHEN I SAY THAT! Then again you can’t see me, so, what do I know, what do you know, what does anyone know? 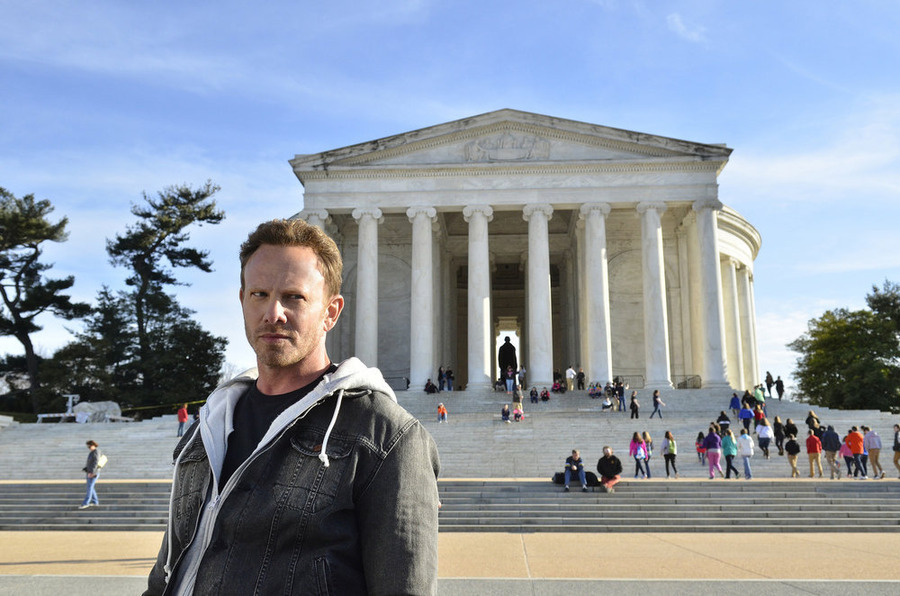 Let’s get to stupid character #2 and talk about Fin Shepard, played by Ian Ziering. I barely recall anything he did in this movie much like April. I just remember he was there for shark killing, he was looking for his son, and I also remember him at the end. I SWEAR to you, this movie is ultra-forgettable. It’s RARE for me to actually forget about a movie shortly after I see it. When the movie’s two leads are barely even memorable other than their names, that’s a problem. And I’ve seen every “Sharknado” movie. THAT’S A FACT. I watched the first one, I saw the sequel but it was being riffed by Rifftrax, I saw the third one but it was more of something that was just on in the background, I don’t really recall that much, I witnessed, livetweeted, and reviewed the fourth one, and now I saw this monstrosity. Also, one of the things I hated the most about this film is this line he gives to the pope, “Forgive father, for I am Fin.” I lost my mind when I heard that crap!

Also returning in “Sharknado 5” we have the character of Nova, played by Cassandra Scerbo. I remember her more in the first minutes of the original “Sharknado” compared to “Sharknado 5” so that says something you need to know about this character. Once again, I barely remember anything about Nova, I don’t care about her, and I was just like, why are all of these people I’m tweeting alongside with obsessed with her? Is it because of how hot she looked in the first movie when she was in her bathing suit? By that logic, Nicola Peltz’s character from “Transformers: Age of Extinction” must be a phenomenal character because she’s a 10/10 when it comes to looks, even though she didn’t give a good performance.

Last but not least when it comes to “characters,” we’re gonna focus on Gil. I don’t have an image for him, couldn’t find too many likable ones, so bear with me. I HATE GIL. I thought he was just plain annoying in “Sharknado 4” but now that we’re somehow here in “Sharknado 5,” he’s gone from bad to worse. While he wasn’t technically as annoying as he was in the installment before this new one, he played a huge part in the movie, which ultimately made me not root for anybody in. He got sucked into a sharknado, and now it is up to April and Fin to save him. I may be a dick for saying this, but seriously, after hearing this kid squeal in the last movie I was just done with him, I was like, “Goodbye kid, I don’t need you no more.” Although when it was revealed that April and Fin were going to try saving him, I lost my s*it. Sure, it’s their kid, but that kid f*cked up my brain in the worst way possible!

Another reason why people watch these films are the celebrity cameos. And while they aren’t really cringeworthy, you can’t help but think, “Why are they here?” You’re seeing all of these people: Claudia Jordan (Deal or no Deal, The Price is Right), Abby Lee Miller (Dance Moms), Fabio, and Tony Hawk, how much are they being paid? Are they being forced to do this against their will? The only cameo I ended up liking and remembering was Gilbert Gottfried’s, which was one of the cameos, if not the only cameo I ended up liking in the fourth movie. Although after seeing this movie, I’m glad I can think to myself that Gottfried is still putting out quality content and not just this stuff. Seriously! Have you seen a couple of this year’s episodes of “Last Week Tonight?” His voice is dubbed over the voice of Jared Kushner!

Let’s get this out of the way. Two things I hate in life are Comcast and product placement. This movie, unfortunately, combines the two together. This is actually, believe it or not, something that occurred in “Sharknado 4,” and seeing it here, it’s actually not as bad here as it was there. In fact, if I remember correctly, I believe there’s less product placement in this movie than the previous one. Although when it comes to Xfinity at the end of the film, the film began to make me screech like a fire alarm. I get it Syfy, you’re owned by NBCUniversal, a Comcast company, doesn’t change the fact I think this is s*itty product placement and it makes me angry!

In the end, “Sharknado 5: Global Swarming” continues to make me lose my faith in humanity. We’ve created masterpieces such as “The Wizard of Oz,” “Back to the Future,” “Willy Wonka and the Chocolate Factory,” now this is the entertainment that people want. I want more quality content, I don’t care what it is, just give it to me! At least “Jaws” listened to viewers and knew when to stop making movies, they stopped at four installments, this series is still going, and it’s gonna keep going until the end of time… (Sigh). One last complaint I have before I give my final verdict is the screaming. I get it, it’s a sharknado, but this movie didn’t learn it’s lesson from the last movie and to not give a headache to its audience from the screaming. Surprisingly, Tara Reid gave an annoying scream. I couldn’t believe what I was watching. I don’t watch “Game of Thrones,” but I was watching this, and I knew someone else on Twitter who was watching this too, at one point they changed the channel to HBO to watch “Game of Thrones,” I imagine they made the right choice. I’m gonna give “Sharknado 5: Global Swarming” a 1/10. “Sharknado,” I need you to learn from the pros, although I don’t think you’ll listen to me because you’re a TV movie, know when to settle down. Joel Schumacher’s “Batman” series stopped after a couple of installments, the older “Superman” movies stopped at “Superman IV: The Quest for Peace,” “Back to the Future” stopped as a trilogy, take notes. Just let your series become obscure enough for no one to ever have to experience again, and we shall have peace. Thanks for reading this review, I kind of hope I’d watch a better movie after watching “The Emoji Movie” recently, but what can you do? Although if you do want to check out my review for “The Emoji Movie” be sure to click the link down below and check it out! Also, if you’re somehow into “Sharknado” or you just want to see me talk about more bad movies, be sure to check out my review for “Sharknado 4: The Fourth Awakens.” It’s been over a year since I reviewed that piece of crap and the fact that it exists, much like the movie we’re focusing on, is a sin in itself. Stay tuned for more reviews! I want to know, what do you think of this movie? Do you like the “Sharknado” franchise? Do you think I’m being too hard on it? Let me know in the comments! Scene Before is your click to the flicks!