Hey fellow readers, Jack Drees here! Today is March 25th 2017, and today we just got a new trailer for the upcoming Justice League film. We’ve actually technically received one trailer in the past, but that was simply just something to show off at San Diego Comic Con, right now we have a new “official trailer.” This was being teased for the past few days, I retweeted one of the teases from some random user’s account, but aside from that, I can’t really say I paid a significant amount of attention towards the teases for this film. Nevertheless, let’s get on with the review.

As you may or may not know, this movie is essentially the get-together of all the DC superheroes. In this movie adaptation based on the comic books, this league contains Batman (Ben Affleck), Wonder Woman (Gal Gadot), Aquaman (Jason Momoa), The Flash (Ezra Miller), Cyborg (Ray Fisher), and for some reason, Superman (Henry Cavill) is shown in images related to this film, not the trailer, but I saw an image with him in it on IMDb having to do with this movie. Why do I say that? You really want to know? Find out by watching “Batman v Superman,” but for the sake of avoiding spitting out spoilers, I won’t go into further detail than that. The trailer kicks off and Batman says that an attack is coming, with Wonder Woman replying that it’s already here. Then suddenly we see a cube, kind of like the tesseract in “The Avengers.” Wonder Woman, who in this case is really Diana Prince then goes on asking Batman, or in this case is really Bruce Wayne, “The others, where are they?” 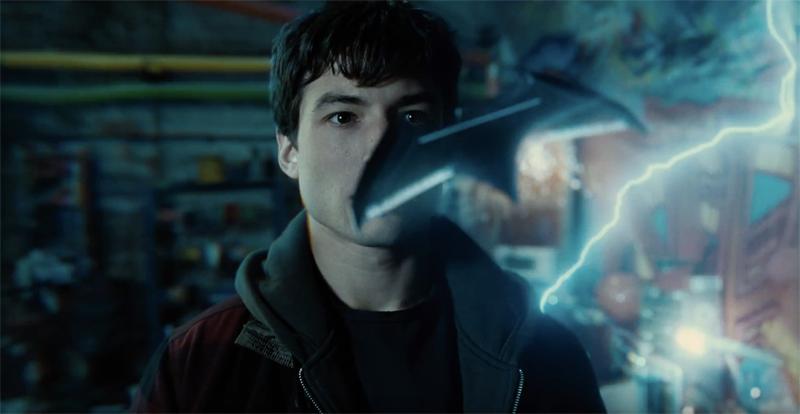 All of sudden we get some clips introducing our main heroes. Bruce is narrating over all of the footage as if he is talking to these heroes, and the more I think about it, it kind of reminds me of the original “Guardians of the Galaxy’s” first trailer. In that trailer, they focused a lot on introducing the characters, the only thing is in that trailer, it didn’t show them in action all the time. Towards the end of that trailer they showed off some brief moments of action but that was pretty much the gist of the action in that trailer. Here, it is nonstop. I have no complaints with how they are introduced except for one minor complaint. That complaint I want to bring up concerns The Flash, I have no problem with his character or how he is portrayed but the thing about him I feel needs to be brought up is that the footage showing him off in this trailer, is pretty much the same footage I’ve seen showing him off in the San Diego Comic Con trailer. Granted it does look pretty freaking sick and this complaint does sound rather nitpicky, but still, as a critic (or movie reviewing asshole, whichever one you prefer), I can’t help but point out something like this out.

Then, there’s some moments in the trailer that we get some more action, only at this point there is no narration at all and you have slides coming up. There are three slides that come up throughout, the first one says “JUSTICE,” the second one says “FOR,” and the last one says “ALL.” All of the action looks intense, the CGI looks well crafted, and I honestly think that if I go see this movie, and if I had to name one redeeming quality, it would be the action. If that is the case, that wouldn’t be too surprising, because it was certainly the redeeming quality of “Man of Steel” and “Batman v Superman.” OK, well, Wonder Woman was probably more of a redeeming quality in “Batman v Superman, but still, the action was probably among the greatest parts of the DC Extended Universe films.

After all of those shenanigans stop, we get what could probably be the best line in the trailer. The Flash, or in this case, Barry Allen, is with Bruce Wayne, they’re talking with each other, and Barry Allen asks Bruce a question. That question is “What are your superpowers again?”, to which Bruce replies “I’m rich.” Let me ask you something, what superpower do you want the most? The power of flight? The power of super speed? The power of super strength? The power of invisibility? The power of teleportation? Or the power to generate money as you please? That last one would be pretty useful you are a parent and you want to spoil your kids.

Afterwards, we get more action, which looks AMAZING to say the least, we get one snipet with Barry and his father who is in jail. I often tell myself how much I love Wonder Woman and can’t wait to see how much ass she will kick in this movie, along with how much ass she will kick in her standalone film that comes out months before this Justice League film, but after seeing some sequences of The Flash in action, I’m starting to look forward to what he has to bring to the table too. I’m not saying that I don’t care about the other heroes, but I’m just saying that The Flash in action happens to be a standout in this trailer. Before the “Justice League” title comes up, Wonder Woman, Cyborg, and Aquaman are all standing in one shot, and Wonder Woman just says “Shall we?” That right there just tells me that Gal Gadot’s voice, at least to me, can make anything sound better. It’s kind of like Morgan Freeman’s voice, only it’s coming from an Israeli female.

The very end of this trailer features lines from Batman, Aquaman, and Commissioner Gordon (JK Simmons), my favorite actor of all time by the way. Gordon says to Batman “It’s good to see you playing with others again.” Aquaman, looking towards Batman, spits out “Just like a Bat, I dig it.” Batman looks to Gordon saying “It may be temporary.” I don’t really have much to say here except, it’s nice to see JK Simmons in this trailer.

In the end, I can’t say I’m completely disappointed with this trailer for “Justice League.” This movie is being directed by Zack Snyder, who directed “Man of Steel” and “Batman v Superman,” and say what you want about the dark tones for those films, I honestly thought they worked, granted I will admit I agree with some people saying that some of the action in those films, despite in my opinion being some of the best action I’ve ever seen, involves the heroes not having much concern for the people surrounded by destruction. But overall, I can’t wait for “Justice League,” in a year which looks like a goldmine on paper for superhero films based on comic books, this is just another example of a movie in that genre that I can’t wait to spend my money on. “Justice League” comes out on November 17th, 2017 in 2D, Real-D 3D, and IMAX 3D, along with other large screen formats. I hope to review it right when it comes out, if I can’t, I hope to review it not too long after. Speaking of movie reviews, I hope to see a good number of other films in the future, but ones I hope to see very soon include “Power Rangers,” “Life,” and “Kong: Skull Island.” There are possibly other films, but those are my big three right now. Also, be sure to check out my last review for a movie you probably never heard of, and if you haven’t, you’re probably living a better life than me, “You Can’t Have It.” I mean, if you want to watch it, go ahead, you can rent it on Amazon Video for $6.99, or buy it for $9.99. But I’ll remind you all that life is short so skidaddle your way through it wisely. Stay tuned for more reviews, and be sure to check out my earlier reviews as well! Scene Before is your click to the flicks!

“YOU CAN’T HAVE IT” REVIEW: https://scenebefore.wordpress.com/2017/03/21/you-cant-have-it-what-these-guys-said-about-a-great-movie/