“Jumanji: The Next Level” is directed by Jake Kasdan, who also directed this film’s predecessor, “Jumanji: Welcome to the Jungle.” This film stars Dwayne Johnson (Rampage, San Andreas), Kevin Hart (Ride Along, The Wedding Ringer), Jack Black (Kung Fu Panda, Goosebumps), and Karen Gillan (Guardians of the Galaxy, Doctor Who). This film is the sequel to the recently mentioned “Jumanji: Welcome to the Jungle,” and it continues following the characters we got to know from the last film, a group of young adults who get sucked into a video game and become the the avatars they chose. And in this followup, the main young adult, specifically Spencer, returns home from studying in New York around Christmastime. He eventually goes into his basement and decides to play the “Jumanji” video game once more. This leaves Spencer’s friends bewildered of where he’s gone and leads to their eventual return to the virtual world.

I have been on this blog since 2016, and I have reviewed a good number of movies every year since then, but one of them was not “Jumanji: Welcome to the Jungle.” For one thing, I had little time on my hands for it, there were other movies I was more focused on such as “The Disaster Artist,” I was trying to get started on 2018 in film, I had my end of year countdowns (by the way, stay tuned for my BEST & WORST movies lists of 2019 once the New Year arrives), and I will also add that I saw the trailer for “Jumanji: Welcome to the Jungle” and before that, I heard about the movie’s plot. I wasn’t particular fond with it. I grew up admiring the “Jumanji” film from the 1990s, the one with the horrific board game that brought havoc upon humanity, I loved that movie from a story and spectacle perspective. The ending still gives me chills just thinking about it. When it comes to “Welcome to the Jungle,” the 2017 reboot, I was scared for how it would turn out because it felt like there was going to be significantly less at stake compared to its 1990s counterpart. After all, the movie took place inside a video game as opposed to the real world, where ACTUAL things happen. But to my surprise, I had a rather fun time with “Jumanji: Welcome to the Jungle.” The main cast has terrific chemistry, a lot of jokes inside the video game worked, Jack Black’s performance is up there with some of the finest I’ve seen in a popcorn movie, and here’s a shocker, it felt like there were stakes! Surprisingly, anything that took place in the real world was boring compared to the video game. Granted, when the movie kicks itself into gear and I start seeing lots of Sony product placement everywhere, I cannot help but get irritated.

Speaking of surprises, I honestly think “Jumanji: The Next Level” may be better than its predecessor. I think it has better writing, the ideas are just about as clever as they were in 2017, it’s crowd-pleasing, and I will say that a couple new characters bring a bit to the table as well. Most notably, Danny DeVito (Batman Returns, The Lorax). 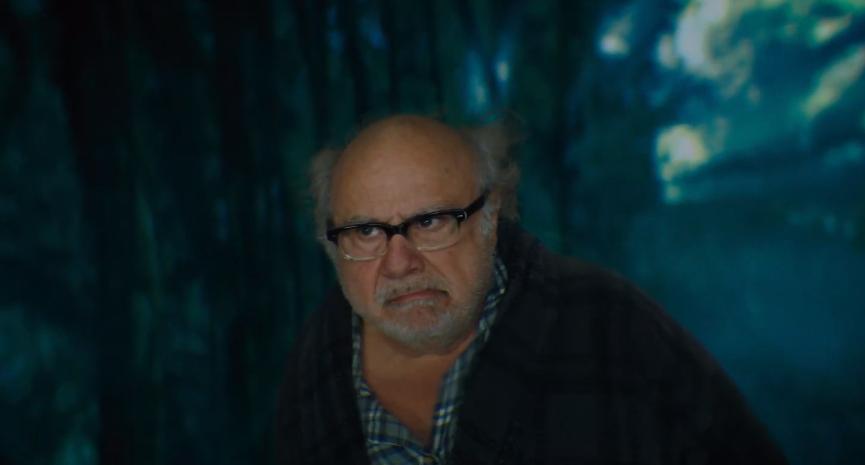 In this movie, Danny DeVito plays Spencer’s grandfather, Eddie, and I don’t know how many of you saw the trailers, but without giving much detail, he ends up getting sucked into the “Jumanji” video game, so he manages to become an avatar. To be as blind as possible, the avatar he happens to portray is why I found it hilarious when he asks “Are we in Florida?” Yes, the trailer reveals who he becomes, but I went into this movie fairly blind so I am just trying to go off of my experience.

Now I mentioned that in the last “Jumanji” movie, “Welcome to the Jungle,” I never really liked anything that happened in the real world, and I say this because anything that was spoken or acted out in the real world was never funny, somewhat generic, and it did not have much glamour to it if you wil. All I saw were four stereotypical teens not knowing they were going to escape their boring everyday lives and that’s about it. Granted, I grew to like them, but still. But what made the real world events interesting was catching up with our past characters, because they were reuniting, and even though I have known them for less than a week, I feel like I have grown up with them. After all, they were in high school in the first film, and now they are following their own paths in life. I have a feeling I will have some sort of reunion with somebody down the road that I have known from high school in the future, after all, the holidays are here, making this a good time for it. Plus, I’ll mention once again, speaking of reality, Danny DeVito’s real life character is honestly a highlight of the movie for me. I am honestly surprised at how much I enjoyed watching him, especially when he has a little reunion of his own. This movie goes into a little sideplot (if you can call it that), about a restaurant that he and someone else operated together. This is just a fraction of the interactions DeVito has with the character of Milo, who is wonderfully played by Danny Glover. Both of them have great chemistry and I honestly would not mind a spinoff mini-series on Crackle or something just listening to them have conversations.

But let’s be serious, real life is overrated, and sometimes it’s a video game, it’s just a fact. I do like how the video game manages to go in different directions with its characters and storyline, this time there is a new plot where the characters are after a different object. It’s sort of got similar beats to the previous installment, but it has enough to not feel like a ripoff. As for the villain, Jurgen the Brutal, I thought he was just going to be this cliche bad guy who wants to do bad guy things upon one or two early impressions of him, but even though he may resemble someone with cliches, the way the movie goes about executing his character, specifically towards the end, is a thing of beauty. There is an ongoing scene where our characters are interacting with him and his cronies, it’s not only intense, but also pretty funny. That’s the thing that I will say is amazing about this movie. I know it’s got comedic talent, but to have TWO “Jumanji” movies that aren’t exactly the within the realm of “Jumanji” I have come to know and have BOTH be funny and charming is one of the best surprises I have gotten during my recent moviewatching experiences.

But even though I will point out that this film is better than the original, it doesn’t mean it’s flawless. As much as I really like the climax, it does get a little off the rails towards the end. Granted, there is a bit of that off the rails factor that I like, but there’s also a tad that I found to be too insane. It is a video game though, which often distorts itself from reality so maybe I’ll retract this error eventually. I think some of the pacing could have been fixed, and once again, this is not that big of an issue, but there are some scenes that take place in the real world that feel like they are just inserted at a random point and it almost doesn’t flow. This movie is not that much longer than its predecessor, and even though I found certain portions dull, the pacing is a bit better in that film. The last film felt shorter than what it actually was, but this one just felt a tad longer. There’s also one scene with ostriches that is most certainly trying to get a laugh out of people, but feels like something out of a a horror movie where every character does not know the first thing about common sense. I get it, jokes bring smiles to people’s faces, but so do characters with brains. Nevertheless, “Jumanji: The Next Level” is funny and I would not mind watching it again on a rainy day at home.

In the end, “Jumanji: The Next Level” is exactly as the title suggests, “The Next Level.” The last movie was good, this one is a step up. I think I’ll end up having a little more replay value with this one, but we’ll have to see. The characters, both real and fake, are all a joy to watch. The movie itself is pretty mindless, but also works because it is so mindless. In fact, portions of its creativity perhaps comes from mindlessness. I know “The Rock” is not a GREAT actor, just a muscular man who has a somewhat engaging screen presence, but if I had to compare the performance he gave in “Jumanji: The Next Level” to pretty much anything else he’s done, this may be the best he’s been in terms of solid acting ability. I mean, when you are playing someone that is literally portraying somebody else in avatar form, it requires a little bit of extra effort to maybe be convincing. For that, props to Dwayne Johnson. I’m going to give “Jumanji: The Next Level” a 7/10.

Thanks for reading this review! My next review is most likely going to be for “Uncut Gems,” which I saw before reviewing this movie, but I wanted to get this “Jumanji” review out first because it felt like a higher priority. Also stay tuned in about a week and a half, where I will have my review for the biggest movie event of the season, “Star Wars: The Rise of Skywalker.” Be sure to follow Scene Before either with an email or WordPress account for greater access and posts brought directly to your personal feed! Please leave a like on this post, and if you like liking, like… a lot, check out my Facebook page! I want to know, did you see “Jumanji: The Next Level?” What did you think about it? Or, what is your favorite video game of all time? Let me know down below! Scene Before is your click to the flicks!