“John Wick: Chapter 3 – Parabellum” is directed by Chad Stahelski (The Hunger Games: Catching Fire, Safe) and stars Keanu Reeves (Point Break, The Matrix), Halle Berry (Catwoman, Extant), Laurence Fishburne (Ant-Man and the Wasp, Ride Along), Mark Dacascos (Hawaii Five-0, Dancing with the Stars), Asia Kate Dillon (Orange Is the Black, Billions), Lance Reddick (Bosch, Fringe), Anjelica Huston (Tinker Bell, Transparent), and Ian McShane (Kung Fu Panda, American Gods). This film is the third installment in the extremely kick-ass “John Wick” franchise, where Keanu Reeves comes up with new, inventive ways of annihilating people. And it’s f*cking awesome. In this fast-paced, killer installment, John Wick has a multi-million dollar price tag on his head. Throughout the film, he must survive at every turn, and avoid every hitman/hitwoman in New York and beyond.

I have a pretty good relationship with the “John Wick” franchise thus far. While I may not enjoy the franchise as much as some other people, I am most certainly able to recognize its stance in the film industry today. In a time where many action flicks tend to have editing jobs where each fight/battle sequence tend to cut at the same speed at which Usain Bolt can run, “John Wick” is a breath of fresh air. It is a franchise that I adore for its frequent attempts to shoot long takes featuring badass, raw choreography on attention-grabbing setpieces. The lighting in some scenes from “John Wick” really gives a sense of some s*it going down, and I think it translated to another action movie I like from this decade, specifically “Atomic Blonde” starring Charlize Theron. Then again, that should not be too surprising because one of the co-directors behind the original “John Wick,” David Leitch, eventually went on to direct “Atomic Blonde.” 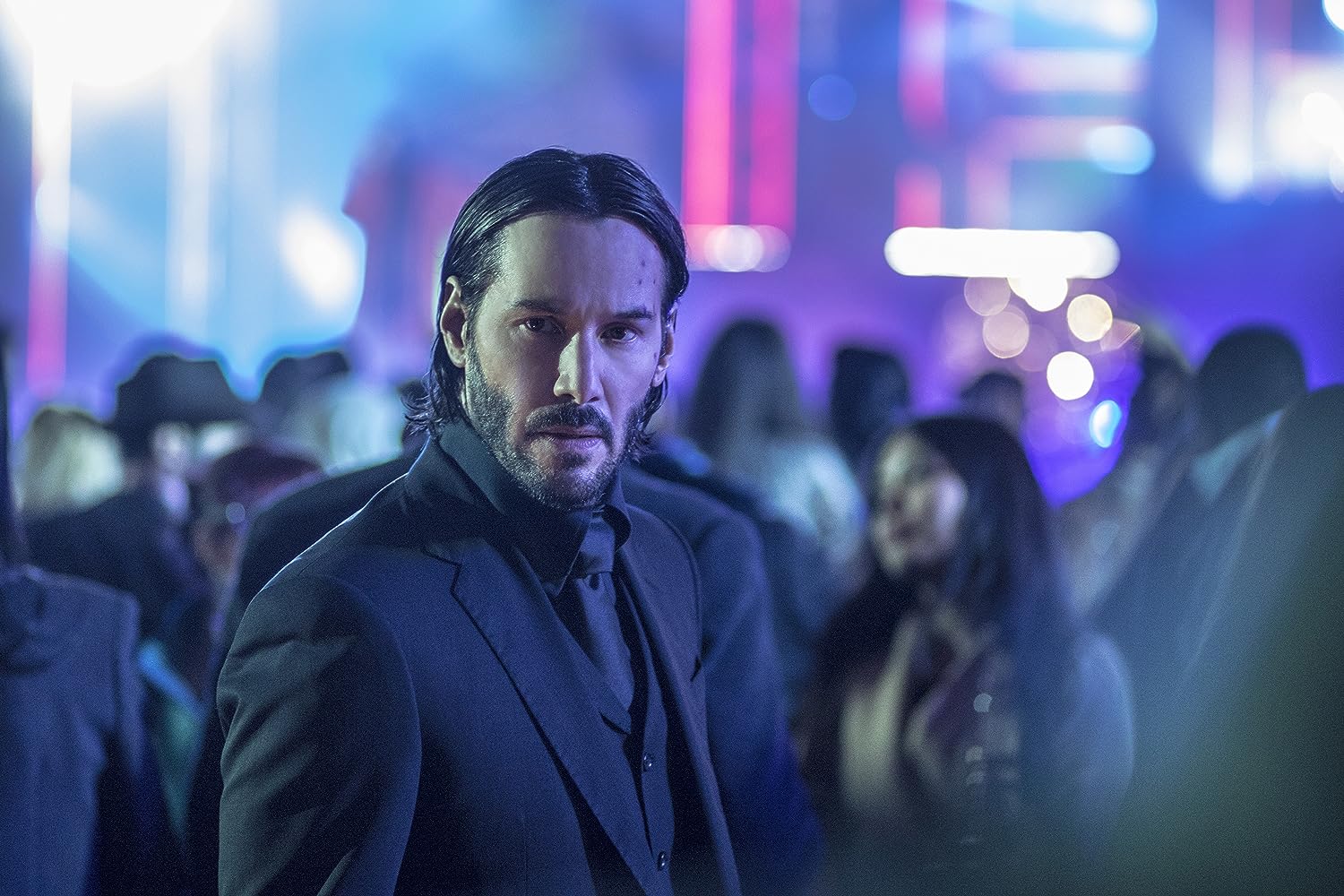 And when it comes to “John Wick: Chapter 3” in terms of anticipation, it grew like a weed. While “John Wick: Chapter 2” was not the best movie of 2017 (although it was good enough to get an honorable mention in my end of the year countdown), the ending seemed to have promised something big in this franchise’s future. Therefore, I began to have high expectations that I thought this installment would potentially deliver upon. And deliver it did! “John Wick: Chapter 3 – Parabellum” may just be the best “John Wick” movie yet. Granted, I may need some time to marinate, partially because I just saw the movie. But having seen it, this had two hours of superb action, compelling characters, and stakes that I rarely feel in movies nowadays. But I will say, the movie’s not perfect, and this is a minor problem, perhaps one that I could eventually take back, but it’s a problem nevertheless.

“John Wick” is a great franchise. It’s not for everyone, but I think it is definitely up there with my personal favorite action-oriented franchises. But much like other franchises such as the Marvel Cinematic Universe, “John Wick: Chapter 3” could slightly differ in a final verdict for those who are not as highly exposed to the franchise compared to more avid viewers. I feel my connection with “John Wick,” my anticipation for this movie, and the fact that I recall how “John Wick: Chapter 2” ended all contribute to my partial joy towards what was happening on screen. Because if you’re like me, chances are you saw the end of “John Wick: Chapter 2,” and felt that there were promises to be kept. If you have not seen “John Wick: Chapter 2” at this point, and I am mainly referring to the ending when I bring this up. I would still recommend “John Wick: Chapter 3,” but I am willing to bet your experience will be enhanced having background knowledge on John Wick’s character.

Speaking of John Wick, let’s just talk about him. Just when you think he cannot continue to find new ways to be the most insane ass-kicker in movie history, you would be proven DEAD wrong. In fact, I saw this movie with my dad and we came out agreeing that he and I basically witnessed the club scene from the original installment multiple times in this film. Regardless of what you may think of this movie as a story, there is no denying that John Wick, or Keanu Reeves, as an action star, is nothing short of sick. It is some of the most intense action I have witnessed in a movie in a long time, and I would recommend watching this movie on the biggest screen possible just for that. When that 4K Blu-ray comes out, I might need to blast the volume on my television!

Although at the same time, John Wick is not the only badass in this movie, because he is accompanied by Halle Berry, who much like Wick, has tricks of her own when it comes to action. Sadly though, I wouldn’t say from a story perspective, that I had much of a reason to care about her character. There was one moment in the film where I actually did, but it’s just a single moment, nothing more. Still, props to Halle Berry and the crew behind the film for making her come off as a force to be reckoned with.

But speaking of forces to be reckoned with, you know how in the first “John Wick” that the main character did what he did in that film because of the loss of his puppy? I had no idea on how prominent dogs would be in this franchise. I say that because as one who usually fears dogs, I could not help but appreciate what this movie did with them. You think Keanu Reeves and Halle Berry know how to kick ass? BRING ON THE F*CKING DOGS! This movie might now have my favorite scene featuring a dog (maybe aside from Up)! I will not go into much detail, but when you turn an animal associated with cuteness into something along the lines of a speedy great white shark, I cannot help but appreciate it. I’ll savor the flavor for you all, but look forward to this. I almost want to sit someone down who would probably usually avoid action movies and market this to them saying “Oh, it’s family flick with dogs in it, you’ll enjoy it!” I kind of want to see their reaction.

And as usual, the direction in this movie when it comes to action is spot on. There’s tons of spectacular setpieces, along with the thousands of sick, but realistic moves done by many of the movie’s characters. The film was shot on location, which I love, it added to the immersion factor that I love seeing in movies nowadays. And as usual, the camera only cuts when necessary, it doesn’t have ADHD, each displayed shot takes its time before moving onto the next. This movie, just like the first two “John Wick” films, is how you do action, and I might just think that this film might be the best in the franchise when it comes to action. However, when it comes to story and character development, it falls flat at a couple points. In fact, this movie partially reminds me of “The Hobbit: The Desolation of Smaug” because the beginning and end are pure adrenaline-rushes on their own. But the middle portion of the movie tends to slow down, and gives its audience a moment to breathe. It’s not really the highlight of the film, but it does feature a moment that is kind of shocking. Look forward to it.

In the end, “John Wick: Chapter 3 – Parabellum” is everything that an R-rated, white-knuckled action flick is supposed to be. Interesting characters (despite some of my prior criticisms), great sequences, surprises, stakes you can feel, and mind-blowing shots. There’s actually a shot in the film that sort of reminded me of “Skyfall” when the movie takes place in Shanghai. If you have seen that movie and gotten yourself to the theater to witness “John Wick: Chapter 3,” you might know what I’m talking about. Again, is the story perfect? It’s not, it definitely serves the purpose well for the most part, but there are minor flaws. Although if I had to judge “John Wick: Chapter 3” simply based on action, this might be a 10/10. But still, as of right now, I still have to marinate, but this is my favorite installment in the “John Wick” franchise thus far, and I’m going to give “John Wick: Chapter 3 – Parabellum” a 9/10. Thanks for reading this review! I just want to make an announcement to you all that I am reaching 300 posts pretty soon, and I already have a plan for what I’m going to do on that. I have decided like for my last number milestone post, I would show off my Blu-ray collection. But I’m actually going to present it in a different way than last time. I’ll have the post up as soon as possible, and I cannot wait to share it with you all. Be sure to follow Scene Before either with an email or WordPress account so you can stay tuned for more great content! I want to know, did you see “John Wick: Chapter 3 – Parabellum?” What did you think about it? Or, what is your favorite installment in the “John Wick” franchise? Let me know down below! Scene Before is your click to the flicks!