Hey everyone, Jack Drees here! As you may know if you’ve followed my blog for some time, I am an IMAX enthusiast. I imagine there are many others out there like me, despite how much more often I post things about IMAX. I’ve seen numerous films in IMAX throughout my life, including a good number just this year alone. Some examples of films I saw in IMAX this year include “Maze Runner: The Death Cure,” “Avengers: Infinity War,” “Solo: A Star Wars Story,” “Mamma Mia!: Here We Go Again,” “Mission: Impossible: Fallout,” “2001: A Space Odyssey,” “Bohemian Rhapsody,” and “Spider-Man: Into the Spider-Verse.” I am granted with the privilege of having a few IMAX theaters close to where I live. By the way, the closest one has laser projection, and subwoofers underneath the seats. 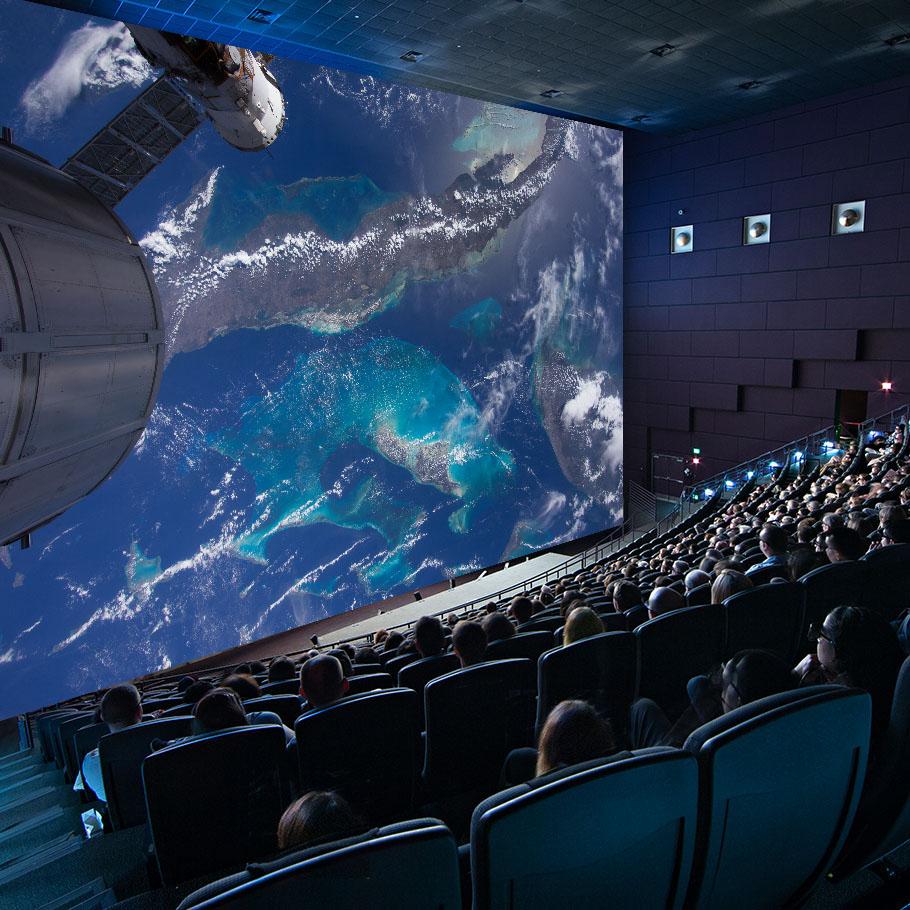 I love IMAX, but it doesn’t mean I don’t have my gripes with the brand. In 2008, they started rolling out their digital projection system, which not only was used on significantly smaller screens, but occasionally was brought in as a replacement to some of the projectors used by older theaters. This brought a reduction in quality, and when it comes to movies shot with IMAX cameras, those older theaters that once used film projection, where the frame covered the screen top to bottom, now supplies a much smaller image. Granted, one minor fix to this is the introduction to another digital projection system which IMAX agreed to unveil alongside Kodak, AKA their recently mentioned laser projection system.

One movie I saw this year on said projection system is “First Man.” As a movie, while there are flaws, I will point out that it is in fact one of my favorite films of the year from a technical perspective. In fact, when it comes to the immersion, that is a part where I had really high expectations. I was not let down. One part where I was let down however is something I found out before going into the film.

“First Man” was partially shot on IMAX film, which some say theoretically provides the highest resolution on any format that can be used on a camera. Granted, the IMAX footage only lasted for about five minutes, but the five minutes were absolutely worth seeing. When IMAX started, all they used was film projection. After all, they started in the 20th century, and digital projection wasn’t big until the end of said century or the beginning of the next.

When I saw “First Man” in IMAX laser, it was undoubtedly one of the best movie experiences I had all year. The superb sound design was music to my ears, the score put me in space, providing me with a feeling that I was on a shuttle wearing headphones, and as mentioned, there was a full frame IMAX sequence that made me feel like I was watching “The Wizard of Oz.” As AMAZING as my experience was, there is one other theater I would have gone to in order to watch the movie.

I live an hour from Providence, Rhode Island. In that city contains what perhaps might be my all time favorite movie theater, Providence Place Cinemas 16 and IMAX. And I specifically mean the IMAX part when I say that because it is one of the few theaters near me with a 70mm IMAX projector, IMAX’s original projection system. I’m not saying that “First Man” wasn’t playing there, it just wasn’t playing there the way I would have preferred to see it.

In fact, it’s not just Providence that wasn’t showing the movie in IMAX 70mm, it was literally every other theater with the proper projection capabilities. From museums, to multiplexes, and other standalone venues. Let’s compare this to some other movies that came out in IMAX 70mm. “Dunkirk,” which came out in 2017, had 37 IMAX 70mm locations. All of this decade’s “Star Wars” films had some sort of IMAX 70mm run, with the one exception being “Solo.” In fact, to really hit my point out of the park, if you look up the Wikipedia page List of films released in IMAX you’ll notice that from 2002 to 2017, there has been at least one new release to be shown in the IMAX 70mm format. Note, I said new release, “2001: A Space Odyssey” does not qualify. In fact, speaking of old releases, while the title won’t show up for 2018, “The Dark Knight” had its tenth anniversary this year and in honor of that, at the same time as “2001,” it was shown in IMAX 70mm in 5 theaters.

Don’t me get me wrong, if I had a time machine, I would certainly consider the option of going back and seeing both movies in the IMAX 70mm format. But if you ask me, I am honestly disappointed that IMAX missed an opportunity to play the best version of a movie possible. In fact, now that this year had not even a single new release in IMAX 70mm, it only makes me wonder what will happen in years to come.

According to Wikipedia, in 2019, there are currently no films slated to release in IMAX 70mm. If I had to guess, there’s a possibility that “Star Wars Episode IX” will get some sort of release, even without the use of IMAX filmography equipment. After all, “Rogue One” released in 2016 in the IMAX 70mm format even though no IMAX equipment was used to record the movie. The next movie coming out to be shot with IMAX 70mm cameras is not set to release until 2020, and that is “Wonder Woman 1984.” Unless IMAX is planning a special engagement which I don’t know about, part of me doubts that we’ll ever see that movie the way it was meant to be seen. Let’s also bring up a giant influence on the conservative effort of IMAX film, Christopher Nolan.

Christopher Nolan is my favorite director of all time. He has a great track record when it comes to his features, from “Memento,” “The Prestige,” “Interstellar,” and most recently, “Dunkirk.” Nolan is also known for shooting the first Hollywood feature on IMAX film, specifically “The Dark Knight.” Speaking of which, all of his films from “The Dark Knight” and on are all shot partially using IMAX technology (except Inception). While there are some films which Nolan has been affiliated with where an IMAX film release never happened, he did happen to get all of his directorial features since “The Dark Knight” in the IMAX film format, regardless of whether they were shot with IMAX cameras or not. And speaking of shooting with IMAX, “Inception” released in 2010, a couple years after “The Dark Knight”came out, and “Inception” was not shot in IMAX.

I love both IMAX 70mm and Christopher Nolan, but the one problem that comes to my mind is that the two go together like bread and butter. Don’t get me wrong, bread and butter is tasty. However, if Nolan is the only director getting the IMAX 70mm treatment (with few exceptions), I almost don’t see a point for putting these films in IMAX 70mm other than to please him. I as an audience member, constantly seek alternative and interesting ways to go see movies. If “First Man” came out in IMAX 70mm, I probably would have gone to see it more than once. Because while I did see it at a theater 10 minutes from my house, I would want to take someone to see it an hour away, where information that wouldn’t be seen on a less detailed screen actually would be seen. But no, “First Man” is directed by Damien Chazelle, director of f*cking “Whiplash” and “La La Land.” Neither of those titles can compete with “The Dark Knight” apparently.

Let me also bring up “2001: A Space Odyssey.” As some of you may know, “2001” is directed by Stanley Kubrick, who passed away in 1999. For those of you who don’t know, “2001” came out in 1968, therefore it just turned 50 years old, which eventually lead to many screenings back in select theaters in 70mm and 4K. I also mentioned it was put in IMAX for the first time this year. The film also went through a restoration process to match what it would be like to watch the movie back when it came out. Guess who did the restoration process? CHRISTOPHER F*CKING NOLAN!

I may only be nineteen years old at this point but I want to work in the film industry. Part of me wants to get my hands on an IMAX camera and use it in a future movie. To know however that my film will not be seen the way I want to see it, is honestly disappointing. Did Damien Chazelle have plans to release “First Man” in IMAX 70mm? To be honest, I’m not sure. But if he did have plans and IMAX rejected them, they’ve done goof.

I know that film is kinda dying. Sure, with the occasion of special engagements, film has a slight glimmer of life left in it. And I may be biased, but I certainly hope it NEVER dies. But as someone who rarely gets to see a movie in IMAX 70mm nowadays, the times when a movie comes out on such a special format is one that I cannot help but praise. If “Dunkirk” is the last movie I will ever get to see in IMAX 70mm, well, I am not going to be happy but at least it was a good movie. The point is, I want more occasions of not just movies being shot with IMAX cameras, but also occasions of IMAX movies being seen the way they have been intended.

So IMAX, I love you, but you missed an opportunity and deserve to be reminded of what you are. Please fix your ways in the future, but I will still go to see movies in your theaters.

Thanks for reading this post! First off, for those of you who celebrate Christmas, I want to wish you all a Merry Christmas and a happy new year! Speaking of the new year, one of the early days of next year I will be counting down my top 10 BEST movies of 2018 and also my top 10 WORST movies of 2018. I don’t know what day my lists will be up, probably the 1st and 2nd, maybe the 2nd and 3rd, maybe I’ll put them up on the same day, we’ll find out. I’ll probably get a couple more flicks in by the end of the year, and if I do, great! Be sure to follow Scene Before either with a WordPress account or email so you can stay tuned for more great content! I want to know, did you see “First Man” in IMAX? What did you think? Did you see the movie in some other way? If you did, let me know! Scene Before is your click to the flicks!