“Vice” is directed by Adam McKay (Anchorman: The Legend of Ron Burgundy, The Big Short) and stars Christian Bale (The Dark Knight, American Hustle), Amy Adams (Nocturnal Animals, Arrival), Steve Carell (The Office, Battle of the Sexes), Sam Rockwell (Three Billboards Outside Ebbing, Missouri, F Is For Family), Tyler Perry (Diary of a Mad Black Woman, Gone Girl), Allison Pill (American Horror Story, The Newsroom), and Jesse Plemons (Game Night, Friday Night Lights). This film is based on the true events, or as the movie suggests, as true as possible, revolving around Dick Cheney, a prominent figure in the US government, and his story of how he changed US history as we know it. 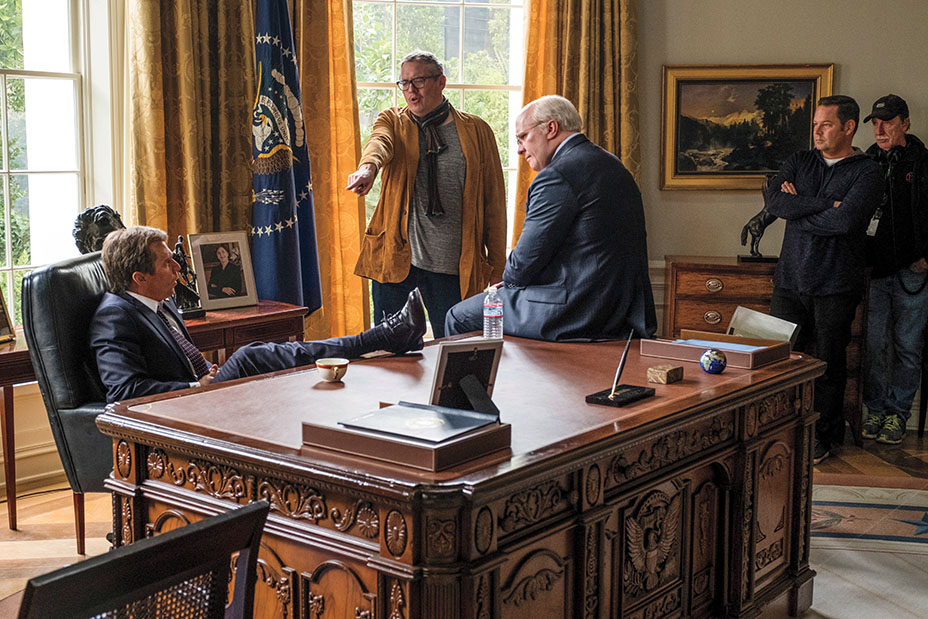 This film is directed by Adam McKay, a name who I do know primarily for comedy. He has done a lot of work with Will Ferrell including “Anchorman,” “Step Brothers,” and “The Other Guys.” Also, he was one of the writers for “Ant-Man.” And while “Ant-Man” may technically be regarded as an action flick with superheroes, part of me would also argue it is a comedy because like some other films in the Marvel Cinematic Universe like “Spider-Man: Homecoming” and “Thor: Ragnarok,” it has many attempts at humor riddled throughout. He seems to have recently made a transition to serious films, most notably with 2015’s “The Big Short.” No, I have not seen the movie. But with a plot revolving around the mortgage market, some serious s*it is to be expected. I will say when it comes to McKay’s direction, it’s pretty well done, but the real highlight to me when it comes to McKay’s work here is the writing, which transitions into not only one of the trippier movies of the year, but also one of the best edited films of the year. I won’t go into detail, but there is a segment where apparently they start rolling credits during the middle of the movie. F*cking brilliant. Also, this is trying to be a serious film, but also it has that feeling of a Wes Anderson-esque film. It’s serious, but it also knows when to have good old quirky fun.

I will say though, going into the film, I knew this film was already well reviewed (for the most part). It has a leading total of six Golden Globe nominations, a couple of SAG nominations, and the concept sounded like something that would generally create buzz. As for my thoughts, I thought it was pretty good, but maybe not best picture good. I mean, looking at the Golden Globes nominees, I’d probably choose “Vice” as the musical/comedy winner, but that doesn’t say a lot. I have not seen “Crazy Rich Asians,” “Green Book,” or “Mary Poppins Returns,” and as for “The Favourite,” without spilling my ultimate thoughts on it (review coming soon), it was just not as likable as “Vice.” The biggest problem I can think of when it comes to this film more than any other is that it mislead me in terms of expectations. The marketing made me think this was heavily going to revolve around the George W. Bush administration, but it is really more about Dick Cheney’s life as a whole.

When it comes to Dick Cheney, I felt this interpretation of the character was very well done, and Christian Bale could have a chance at getting some awards. I gotta also give praise to the makeup department, because HOLY CRAP. Christian Bale is in his forties right now and the makeup in this movie makes him look like he’s a lazy grandpa on a generic sitcom that never got good ratings. I watched a movie that came out last year, you guys may know what I’m talking about, “Darkest Hour,” which starred Gary Oldman. The makeup for Dick Cheney in this movie is about on par as the makeup for Winston Churchill in “Darkest Hour.” In “Darkest Hour,” you have Gary Oldman, who at the time wasn’t “young” per se, but he still looked relatively youthful given his age. In “Darkest Hour” he transformed into, well, Gary the “Old Man.” In “Vice,” the same can be said for Christian Bale, who actually happens to be younger than Gary Oldman.

Another standout performance comes from Amy Adams as Cheney’s wife, Lynne. The way they showed her off in this movie was kind of intriguing. It shows the power of a lovely husband and wife. Cheney would occasionally need to bow out from his campaign for one reason or another but his kick-ass wife would occasionally step in. Also, yes, from an acting perspective, Adams is SUPERB. I became rather invested in her character for some time, not to mention her relationship with Dick Cheney. I cared about their family, their daughter happened to come out as gay, and despite coming off as conservative, they clearly understand their daughter. I wouldn’t call this movie LGBT propaganda, which I think is cool because propaganda is something I usually don’t want in my media, but it just shows you how human people can be. Granted, this is a Hollywood movie, and Hollywood nowadays is full of liberals, so there is a good chance that there is a liberal agenda attached here somewhere, but still.

My personal favorite acting job in the movie was done by Sam Rockwell. Last year he won an Oscar for his role in “Three Billboards Outside Ebbing, Missouri,” so therefore it should be no surprise that the dude has acting chops. Honestly, I think he might have a shot at another one. He plays George W. Bush like angry ten year old plays “Fortnite.” He’s lean, mean, and he just does it oh so beautifully. Last year when I saw “Three Billboards Outside Ebbing, Missouri,” Rockwell might as well have done my third favorite acting job in that film. Here, he’s probably at my top spot. And again, the makeup department did a great job here! No debate about it.

I will say that I might have an interesting perspective when it comes to this movie because I actually grew up during the Bush adminstration. I actually wasn’t old enough to remember 9/11. My earliest memory of hearing about it was in the year 2011, when I was eleven years old and watching a commercial on Nickelodeon while “Spongebob Squarepants” was on or something like that. This movie manages to capture the fear of the 9/11 event from inside government headquarters. It also manages to showcase how Cheney was able to get s*it done, and really, he seemed to have gotten more done than George Bush. There is a scene where the two are sitting down and having chat, some time before Bush became president and Cheney just suggests he’ll deal with foreign policy, bureaucracy, whatever any normal human being would find boring about working as the president of the United States.

Also, one last thing, I mentioned that Adam McKay wrote a Marvel movie, but now it can be argued that he directed a Marvel movie. Stay for the credits because there is a good scene to watch if you pay attention. I WILL NOT go into detail, but it takes a bunch of people who are in the movie for a scene and just basically puts them in a funhouse of our modern society. Look forward to it. 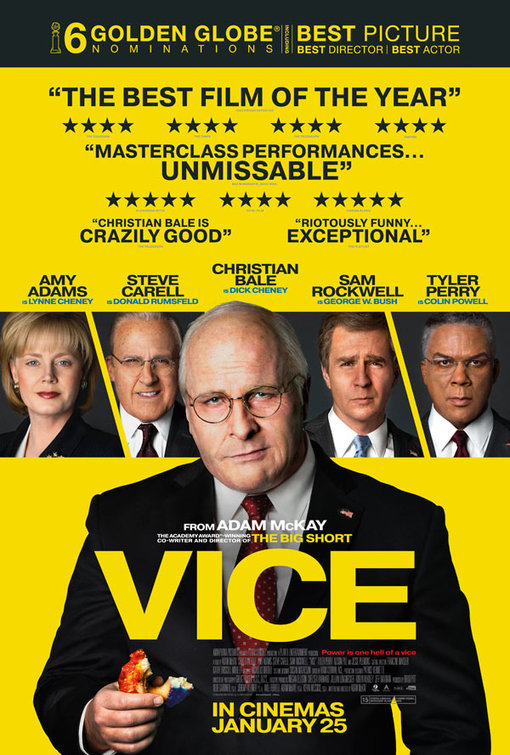 In the end, “Vice” was not exactly disappointing, but it also wasn’t the “Best Picture” that the Golden Globes seems to be calling it. To me, this is another “Moonlight.” It’s good, but not “Best Picture-worthy.” I would love to however give massive kudos to the editing, writing, acting, and makeup department. Everyone affiliated with those categories, you rock, you’re awesome! There’s a good chance I’ll watch the movie again at some point, but when it comes to award-bait this year, to me, “Vice” is no “First Man.” I’m going to give “Vice” a 7/10. Thanks for reading this review! Pretty soon I’m going to have my review up for “The Favourite,” which is going to probably be my final review of the year. I want to see “Aquaman” at some point, but part of me is not sure if I’ll get to it on time before the new year begins. But speaking of the new year, be sure to stay tuned for my top 10 BEST movies of 2018 and my top 10 WORST movies of 2018. Those lists will be up once 2019 arrives. Be sure to follow Scene Before with a WordPress account or email so you can stay tuned for more great content! I want to know, did you see “Vice?” What do you think about it? Or, what do you think is going to happen at the Golden Globes this year? Let me know down below! Scene Before is your click to the flicks!