“The Grinch” is directed by Yarrow Cheney (The Secret Life of Pets) and Scott Mosier (Clerks). This movie stars Benedict Cumberbatch (Star Trek: Into Darkness, Sherlock) as the title character who hates Christmas and everything associated with the holiday. There have been multiple on-screen adaptations of Dr. Seuss’ children’s book, and now Illumination (Despicable Me, Sing) has attempted to create their own version of the famous story.

One strange thing about my life is how I have no memory of seeing the Jim Carrey adaptation of “How the Grinch Stole Christmas!”, despite how it released a year after I was born. However, I do recall watching the rather well known animated edition which took the drawing style of Seuss himself. That version was short, sweet, and very much got the point across. The Grinch is a dick and shall never be tolerated. In this new, slightly more lighthearted adaptation of the popular children’s story, The Grinch is a bit more relatable than his 1966 on-screen counterpart voiced by Boris Karloff. And to be honest, when it comes to tone, that’s where this movie sometimes fails. I know it’s a kids movie and kids movies are supposed to be less frightening than some made for adults, but I really wanted a darker tone here. I will say though, some of the music in this film, created by Danny Elfman (Spider-Man, Charlie and the Chocolate Factory) actually matches that dark tone I want from a movie like this.

However, with 2018’s “The Grinch,” we get less of an emphasis of The Grinch as a monster and make him more like Squidward Tentacles from “Spongebob Squarepants.” He despises life, he lives without wanting company, and much like Squidward, hates Christmas. There’s some parts of this new Grinch that totally work. For example, Benedict Cumberbatch seems to make the Grinch his own character. If anybody can pull off The Grinch from a voice perspective, it might as well be Cumberbatch. After all, he did give one of my all time favorite voiceover performances as Smaug in “The Hobbit.” Cumberbatch comes off as depressed yet sinister, which I can tell is what the crew behind “The Grinch” was going for. Although despite mastering this Grinch, I gotta say that it didn’t equate to a quality movie. I know the formula for family movies nowadays is to inject as many silly gags as possible while still maintaining a lesson for children, and the movie does succeed at both things. However when it comes to the silly gags, some of these just felt off-putting, awkward, or just forgettable. I remember explicitly putting my hand on my head in disdain during certain parts of the film. I don’t recall which parts, but that brings two negatives to the table. Maybe a positive because now I don’t have to recall what moments made me dissatisfied. There’s this one moment during the first half of the film where The Grinch is in preparation mode, his dog notices him, and we get a shot with The Grinch’s butt going directly in our face. Keep in mind, I saw “The Grinch” in IMAX. The screen was eight stories high. So I got to see eight stories of The Grinch’s ass right in my face (including black bars, which reduces the size a ton in all technicality)! At least it wasn’t in 3D, that would be worse!

One side of the story that I honestly cannot stand involves a family in Whoville. This family has a heavy involvement with the film’s plot and even triggers in a couple of other Whos. The main thing I want to bring up is the relationship between a mother (Donna Who) and a daughter (Cindy-Loo Who). Both actresses behind these roles (Rashida Jones and Cameron Seely) did a fine job with their performances. My problem doesn’t involve their acting abilities. The big problem however is their chemistry. I know this is a kids movie. I know kids are a target audience. But keep in mind, adults are watching these films too. Who do you think happens to be taking the kids to these movies? As a technical adult at 19 years of age, I honestly felt like some of my intelligence was insulted. I can suspend my disbelief during movies. I enjoy the “Fast & Furious” franchise, and there’s a lot of other animations that wouldn’t work in the real world which I happen to admire. There are some things however, regardless of whether they are written to be animated or put into live-action, in this very movie, that I thought were an insult as soon as I saw them. The chemistry between the mother and daughter is one of those things. The mother came off as this individual who seems to know she has a daughter, but it’s like she’s viewing her as someone she doesn’t even need to protect. Keep in mind, based on her IMDb profile, I can definitely tell Cameron Seely, the voice of Cindy-Loo, is younger than me. Wouldn’t the mother be a little more worried about some of the things she does? That’s not the only suspension of disbelief I couldn’t achieve, I also couldn’t buy into the fact that one character in particular, without giving a name away, was able to find The Grinch’s house without really knowing a thing about him or where he lives. And if you think about it, it’s somewhat easy to find, but still, my complaint stands. Maybe I missed something earlier on in the movie, but when you’re in an auditorium with somebody who literally had their tablet on for pretty much the entire first half of the film, you can get distracted at times. And yes, I said TABLET. NOT A PHONE! A TABLET! And even worse, there was lots of time wasted when the kid using the device and not even doing a thing on it! It was just on the home screen! If it were being used as a closed captioning device then that’s a different story (not sure how the technology works entirely). 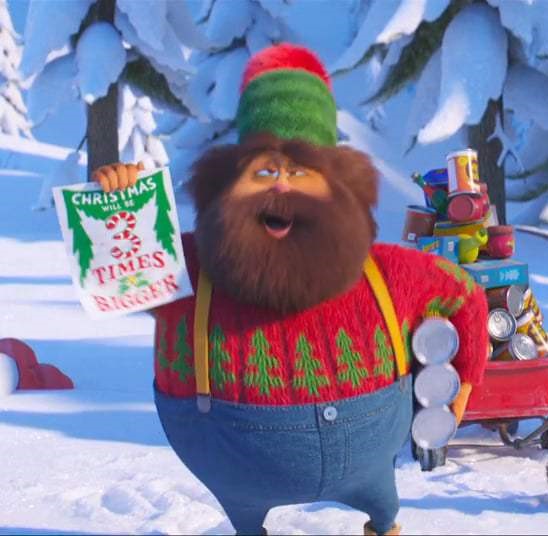 Let’s also talk about Kenan Thompson (Snakes On a Plane, Saturday Night Live) in this film.

His character might be the biggest stereotype for a black person I’ve seen in a film since Patty from the “Ghostbusters” remake. My f*cking gosh, I HATED this guy! One of the worst casting decisions I’ve seen in my entire life. Kenan Thompson is not a bad actor, I’ve seen him do some fine roles on “SNL.” He’s especially fantastic as Steve Harvey on all of the show’s “Family Feud” parodies. But I feel like the biggest problem with this role is that I could especially tell that Kenan Thompson’s voice is involved. Thompson has such a recognizable voice in my mind that out of every voice given in the movie, his was the most obvious. I knew Benedict Cumberbatch was playing The Grinch before going to see the movie, but had I not seen any stories or marketing related to this film, I could potentially think to myself, “Wait, that was Benedict Cumberbatch?” Kenan Thompson to my knowledge cannot alter his voice enough to make me think he’s playing someone other than himself. Part of me is willing to bet the people casting everyone into the movie wanted to cast Kenan Thompson just to say they’ve put a black guy in the film. And that is sad, because while it does bring diversity to the table, his performance just blows! The narrator for this film is black as well (Pharrell Williams). As a narrator, I felt like his voice didn’t work entirely, but it could have been worse. You know, it could have been Kenan Thompson. I’m guessing Morgan Freeman wasn’t available to narrate this bitch?

I’ll give some credit to the movie though on a few positives before I give my final verdict. This film is very well animated. It comes off as polished and some of the images from the film are some of the better ones I’ve witnessed from Illumination. Some of the voice acting worked, except for of course, Kenan Thompson. And this movie is short enough to avoid inducing a feeling of a snail’s pace. After all, it is only an hour and a half, which can be a good thing because of what I just mentioned, but to me it also makes this movie feel like even more of a cash grab than it already is. I don’t feel like I’m going to remember this “Grinch” adaptation all that much, and maybe it will be played a lot around Christmastime in years to come. Heck, “Christmas with the Kranks” is going to be on FX during the 24th of this month and the reviews of that movie certainly weren’t praising it. Anything’s possible.

In the end, “The Grinch” is certainly a mean one, and it made me feel like a Scrooge. If this movie does one thing well, it’s making The Grinch’s character relatable. Sure, he hates his life sometimes even though life for him is the complete opposite of pain and suffering. Yes, he might be out of shape. But thanks to this movie, it made me hate Christmas a little bit more than I once did! Because now we have another bad Christmas movie! Kids who watch “The Grinch” might enjoy it, but the film might end up making them dumber without said kids even realizing such a thing. Aside from some neat animation and decent voicework, there’s nothing that stands out or appears to be excellent regarding “The Grinch.” Parents, if your kids drag you this movie, do them a favor and put coal in their stocking on Christmas morning. Please? Also, tell them Santa isn’t real. I’m going to give “The Grinch” a 3/10. Thanks for reading this review! Tomorrow night I’m going to see “Second Act,” which comes out on December 21st, a little over a month from the time I’m finishing this post. I got passes for an early screening of the film, so therefore I’m gonna see “Second Act” a month early. My review will most likely be up sometime around December. Also, while I don’t really know my plans for the rest of the week or this upcoming weekend, I do have aspirations to see the new Julius Avery film “Overlord.” I heard “Overlord” flopped this weekend, so this might affect me even being able seeing it in the theater, but if it’s still there this next weekend, I should hopefully have an opportunity to check it out. Plus, I’m too behind on “Harry Potter” to see the new “Fantastic Beasts” movie. Be sure to follow me on Scene Before either with a WordPress account or an email so you can stay tuned for more great content! I want to know, did you see “The Grinch?” What did you think about it? Or, which on-screen adaptation of “How the Grinch Stole Christmas!” is your personal favorite? Let me know down below! Scene Before is your click to the flicks!