“Gringo” is directed by Nash Edgerton and stars David Oyelowo (Selma, Interstellar), Charlize Theron (The Fate of the Furious, Atomic Blonde), Joel Edgerton (The Gift, The Great Gatsby), Amanda Seyfried (Mamma Mia!, Ted 2), Thandie Newton (Mission: Impossible II, Crash), and Sharlto Copley (District 9, Chappie) and is about a guy by the name of Harold who finds himself in Mexico. As his life becomes a miserable wreck and while it seemingly couldn’t get any worse, his status eventually changes from law-abiding citizen to wanted criminal.

I’ve seen the trailer for “Gringo” some time before it came out in theaters on the 9th of March this year. From what I saw, I was rather intrigued. However, I never saw it in theaters. Funny enough, that same weekend, “A Wrinkle In Time” released, which actually features the actor playing this movie’s main character. I didn’t see that either. Instead I waited to watch that for free on a plane. Also, hilariously enough, I watched “Gringo” for free too. No, not on a plane, but at home. As an Amazon Prime member, I can watch all of the content made by Amazon with no cost. “Gringo” was just recently added to Prime for free. So while my expectations weren’t roof-raising, they were certainly existent. Going into “Gringo,” I just hoped my expectations would be fulfilled.

In fact, having seen the trailer one more time, I was instantly reminded of what exactly ruined the experience for me. For one thing, all of the funny parts (if this movie really had any) were shown in the trailer, and judging by the trailer, I was thinking this movie was going to go in a very predictable direction. And I don’t mind having my expectations be met with a different result, but something happens in this movie that is so different from what the trailers reveal that it’s just plain jarring! I’m not gonna get into spoilers, but the trailers made me think that this was going to be about a guy who gets kidnapped in Mexico. What the movie really does in terms of the main plot is completely different to the point of utter insanity! I don’t remember the last time I went into a movie that is just different from what the trailer shows as much as this!

Also, keeping spoilers away from everyone, one of the big things the trailer showed to me, an audience member, when it was shown in the movie, not only wasn’t funny, it was kind of painful to watch. And no, it wasn’t bloody or scary or anything, it was just cringeworthy in a dark way. Like, why did I have to see this? I was watching this movie in my bedroom while I was lying down on my bed, paying attention to whatever s*it is going on, as I’m witnessing one of the biggest diversions from a trailer in movie history, I was basically just uttering random noises, with my body against the wall next to my bed.

Also, I gotta say, this is marketed as a comedy, but there are barely any laughs in this. Granted, it’s a dark comedy, and the jokes aren’t mile a minute, which could mean you get less corny and forced jokes, but I was expecting some comedy that was faster than what we got here. And basically whatever attempt at humor I witnessed on screen was seen in the trailer. I usually never complain about that sort of thing because I see all of this stuff coming but even when I do, there’s usually SOMETHING I have yet to see in terms of comedy. Here, I felt like there was nothing. I did laugh on one or two occasions. But that’s like saying Pac-Man would only eat one or two dots on occasion at a party. Either he’s having a rough time, or the party planning has gone to s*it.

Let’s talk about the closest thing to a likable character this piece of crap has, and that is David Oyelowo’s character of Harold Soyinka. I say that because just about everyone else is either a douche or you just don’t care about them. Speaking of that, Harold is probably one of the finest examples of a “down-on-luck” character I’ve seen in recent history. Having seen this, I don’t even know what to think. On one hand, I gotta give props to the movie for at least trying to make Harold the one character to root for while everyone else is against him. But on the other hand I gotta say that having too many s*itty characters can only mean one thing. You have a s*itty movie. 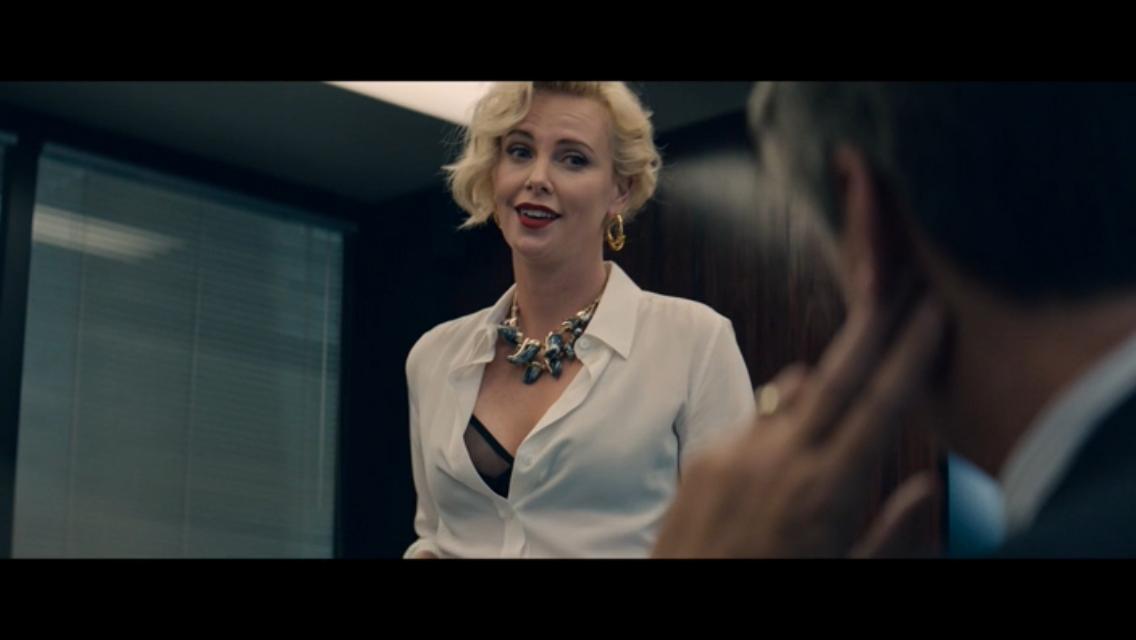 And in a movie full of s*itty characters, you might as well make an excuse for one of them saying, “Hey, at least this bitch is played by Charlize Theron!” Don’t get me wrong, Charlize Theron is a great actress, she can play the very definition of a badass if you give her the right script. Just go watch “Hancock,” “Kubo and the Two Strings,” “Atomic Blonde,” and heck, I’ll even say “A Million Ways to Die in the West!” And out of all of the performances in the movie, I think Theron might just take the cake as top performer. But I hate her character, just like everyone else in this movie, so why should I even care at this point?

Another thing I should point out is that there are two people in this movie with the last name Edgerton, and yes, they are related. You’ve got Joel Edgerton (left) playing Richard Rusk, who is often in scenes with Charlize Theron’s character, Elaine Markinson, and you’ve got the director of the film, Nash Edgerton (right). A lot of you might know Joel Edgerton as an actor, but when it comes to his brother, he is mainly involved in stuntwork. When it comes to directing, he mainly has done shorts up to this point. I don’t know exactly how the two ended up in this movie together. Maybe there was a favor to be fulfilled with one sibling, the other, or maybe someone else involved. Perhaps Joel wanted to kickstart Joel’s directing career. I dunno, but in all seriousness, this reminds me of Melissa McCarthy and her husband, Ben Falcone. Basically, almost every single thing that Ben Falcone has directed or written has Melissa McCarthy in it. “Gringo” almost might be an excuse for a couple of brothers to make a movie together. And just like McCarthy and Falcone, the Edgertons and I need to have a little discussion on how to make a good movie!

In the end, “Gringo” most likely kidnapped me. If you watch the trailer for this movie before going into it and see something different out of the trailer or the movie then good for you. For me, this was a ripoff. I had SOME expectations for “Gringo,” not a lot, but some. Whatever little expectations I had, somehow were not even met. “Gringo” is not funny, it’s full of unlikable characters, the director might as well be there partially because of his brother, and it can show you how important it is to market your movies properly. When I saw the trailer, I was sold. Turns out what I was sold happened to be fraudulent and expectation-altering to the point of wanting to die. I’m going to give “Gringo” a 2/10. Thanks for reading this review! Pretty soon I’m going to have my review for “Eighth Grade” so look forward to that very soon! Be sure to follow Scene Before either with your WordPress account or an email so you can stay tuned for more great content! I want to know, did you see “Gringo?” What did you think about it? Or, what is a movie that was completely different to you than what you got out of the trailer? Let me know down below! Scene Before is your click to the flicks!