“The Last Movie Star” is directed by Adam Rifkin (Detroit Rock City, Look) and stars Burt Reynolds (The Cannonball Run, Boogie Nights), Ariel Winter (Modern Family, Mr. Peabody & Sherman), Clark Duke (Kick-Ass, The Croods), Ellar Coltrane (Boyhood, The Circle), and Chevy Chase (National Lampoon’s Vacation, Caddyshack). This film is about a famous actor by the name of Vic Edwards as he is invited to a film festival in Nashville. According to the invitation, Edwards is said to receive a lifetime achievement award. Famed celebrities such as Clint Eastwood and Robert De Niro have also been invited and received this very award. Little does Vic know that his trip is about to go to hell real fast.

Going into “The Last Movie Star,” I can’t really say I knew all too much about it. The main reason why I watched this movie in the first place is because I have an Amazon Prime subscription, and this movie was free. And I was somewhat looking forward to it. After all, it was distributed by A24, one of the best studios out there today. Not to mention, there were some neat names attached. Burt Reynolds and Chevy Chase are highly revered actors. And even though “Modern Family” might be the most overrated TV show I’ve ever watched, I do like Ariel Winter and I think she has a ton of talent that she can show off to viewers. This movie had me with the actors attached, and the first few minutes, while not perfect, happened to be enough to keep me interested. Then I came across the movie’s first straight-in-my-face flaw, which occurred during the scene where it was so obvious that the movie was trying to make a parody of Southwest Airlines. There’s nothing wrong with that, but the thing that’s wrong is there’s this clerk that is probably the most overexaggerative person on the entire planet. It almost reminds me of one of those workers that is just trying to act all hyper just because they’re working at Disney World. Or if you guys have ever seen the atrocity of a comedy “How to Be a Latin Lover,” there’s one character played by Kristen Bell who is this cashier, it reminded me of that. It just came off as a bit too cartoony and it was like I just exited reality for a second there. And that’s just the kickoff of a downward spiral to Crashandburnville. Because the movie’s two main characters, at least from my personal perspective are DICKS. I mean, seriously! How am I supposed to root for either of these characters in any sort of situation? Granted, as the movie progresses, they feel less dicky, but as I keep dredging through, I just don’t feel anything for them because of how moronic they came off earlier in the film. There is a point where the main character of Vic (right) breaks a camera that is specifically being used for the film festival! There’s also a point where Vic is calling everyone who attended the film festival losers! It reminded me of that SNL sketch that William Shatner did. There was this one sketch called “Trekkies.” A bunch of nerds are together at a convention, and they are near a booth where a guy is announcing what will be going on at the con. One big announcement is the introduction of William Shatner. He speaks, telling everyone to get a life, that all of the convention’s attendees made his work a waste of time. Granted, having seen that sketch, I understand the context and what it was trying to mock. I thought it was rather funny. But “The Last Movie Star” is not a comedy. If you watch this movie, you can probably make the argument that they were trying to either go for the “don’t meet your heroes” thing or they were trying to point out how much this guy has had to put up with during the trip thus far. Sure, for a guy of his stance, he did have to put up with a lot. It doesn’t really make his actions forgivable however. His actions made me care less for what was to come during the movie. And you know what? Saying that is somewhat sad because this could have been a really interesting film about realizing who you are even at an old age. If this were another character, I probably would have felt a tad more emotion that had been earned. And sure, I did feel emotion in some parts, but it didn’t feel as earned as it could have been. I say this because a part of my mind was asking if this dips*it really deserved all that he got.

As for the person alongside Vic in the picture above, Lil McDougal, she basically is driving and assisting Vic for the entire movie. But my first impression of her really ticked me off. How is someone THAT angry? I was able to kind of buy into the chemistry between her and Vic, but in all seriousness, when you take these two characters and put them together, you can’t help but think of them as two assholes selfishly traveling the Earth.

And I do mean SELFISHLY. The main story of the movie wouldn’t have happened if it weren’t for Vic the Dick not wanting to go back to the film festival. Granted, it was kind of a wreck, but you don’t have to be a big baby about it. At least try to impress those who made the effort to come. If you didn’t want to go, you shouldn’t have flown to Nashville in the first place. I will say, both actors did a fine job in both of their roles, but it doesn’t change the fact that both of their characters just plain suck! I will say that the performances and cinematography do make up for this wreck. And there are I guess some rather “heartfelt” moments. Sort of. Maybe. I dunno. I was not fond of this movie. There’s not really much to say except that this movie was probably trying to be an interesting story about a guy remembering his past. That could have been really cool, but it was just bogged down by a couple of selfish and unlikable characters. I don’t really know what else to say except that one of my biggest problems aside from the characters is one moment that occurs as Lil is taking a bath. She has this TV in front of her which has smart features. Apparently one of them is an icon for Instagram, the very popular social media service where selfies on the beach are sometimes more important than a march for a good cause. I own a smart TV, and to be specific, I actually have a Sony Android TV in my room. In what universe can one actually use Instagram on their TV?! I will say, I do have a Samsung Blu-ray player that has a search engine, so you can search up Instagram on that thing. But this TV literally has a direct app! WHAT THE F*CK?! I’m not going to go into detail to avoid spoilers, but as I reflect on that moment, I continue to ask myself if I just witnessed the biggest plot convenience of the year. And I can probably guarantee you to the tenth degree that I just did. Whoope-f*ckin’-doo! 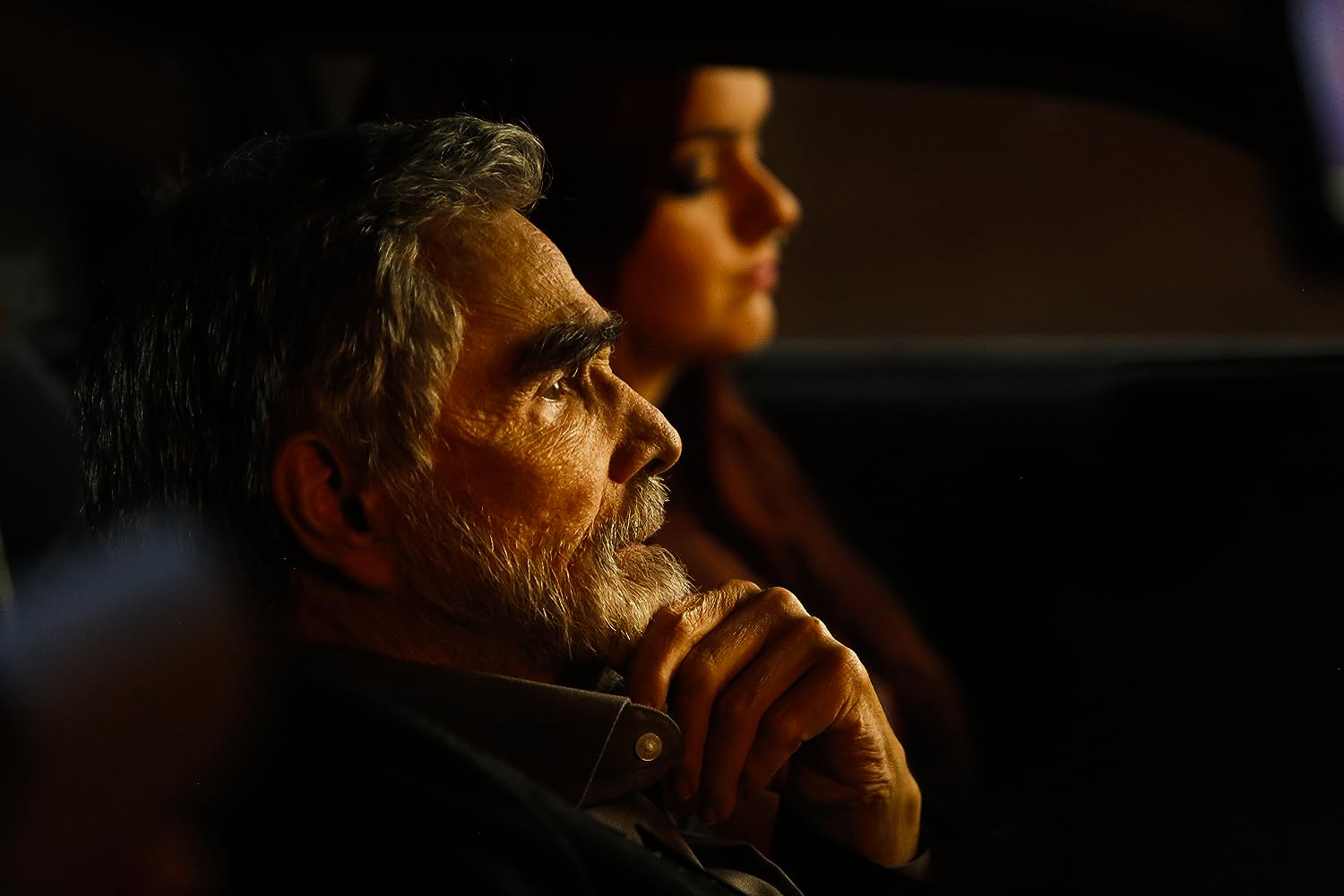 In the end “The Last Movie Star” just goes to show that not all good can come from A24. Granted, they’re a great studio. They released one of my favorite comedies of all time, “The Disaster Artist.” They’ve also released another one of my favorite films of the decade, “Room.” But this is a bit of a disappointment compared to some of A24’s other material. Although I did watch this film for free so I guess the movie does have its pros and cons. What I can say though is that this is one of those films that is DIFFICULT to rate. On one hand, the film managed to get a number of things right. But the characters really tarnished this bitch. So ultimately, this rating could change, but for now, I’m going to give “The Last Movie Star” a 5/10. I gotta say though, if part of this movie was trying to say “don’t meet your heroes,” it was a somewhat interesting take on it I guess, but I guess the unlikable parts about the main character got drilled in my head to the point that I just didn’t find this guy all that interesting. In fact, I’ll say, I met my heroes. And I feel proud to call them my heroes. They mean the world to me. I’m just proud to say that they were nothing like this guy. They were respectful, calm, and rather humble. Vic just embodies that celebrity you DON’T want to encounter. Similar to how I want to go back in time and not encounter this movie. Thanks for reading this review! For those of you who have been keeping up with my blog, you may know that I just finished reviewing all of the Tom Cruise “Mission: Impossible” movies. For those of you who haven’t gotten a chance to read any of them, links are provided down below to check them out! Be sure to follow me here on Scene Before and like this post! Stay tuned for more great content! I want to know, did you see “The Last Movie Star?” What did you think about it? Or, who is a celebrity you met who turned out to be a total asshole? Let me know down below! Scene Before is your click to the flicks!