Hey everyone, Jack Drees here! If you are a movie buff or just like going to the movies or wanted a way to make your moviegoing experience cheaper, one thing you may have done over the past number of months is get yourself a MoviePass card. Now this is something I personally have never done. But I will say it did sound like a good deal. NOTE: Did. The concept is that you can watch one movie in the theater for free each day. Keep in mind, this concept came in 2017, six years after this company was founded and had a more limited structure when it came to going to the movies with this thing. Nevertheless, the concept was to watch a movie a day for $9.95 a month. So it’s basically the same thing as Hulu or Netflix, only you’re subscribed to the opportunity to go to the movies once a day. If you ask me, it’s not a bad deal. But over the months, MoviePass had changes made to their policies. Certain theaters wouldn’t accept MoviePass, you couldn’t see certain movies such as this year’s “Red Sparrow” with MoviePass, the company quietly at one point removed the opportunity to see one movie a day and brought it down to three movies a month. Not only was it three movies a month, but they also made it mandatory to also get iHeartRadio. The unlimited plan was however reinstated, but only doom was to come. There was a point where MoviePass basically burned through money harder and faster than my brain did during the SAT, they introduced surge pricing, you couldn’t see popular films or films in prime time slots without paying extra. Then in July, it only got worse.

MoviePass is owned by Helios and Matheson Analytics, and they filed to raise $1.2 billion in order to keep MoviePass alive. That was just the beginning of the month, specifically July 2nd, because on the 26th of that very month, MoviePass’s stock was at such a low point that the firm was forced to borrow $5 million just to keep business going. Not only that, but they also did a 250 to 1 reverse stock split earlier that same week! So their very low stock artificially went up, but just a week later, it plummeted like that LEGO project your kid has been working so hard on all because the kid’s “stupid sister” thought it would be fun to tear the project apart. The stock at this point sits at less than ten cents! Wait, no no no, that’s too much. It’s sitting at less than nine cents! That’s not truthful enough either? Well, I do have another truth to tell you! The stock for MoviePass just so happens to be sitting at less than eight cents!

That thing you see above, THAT is an authentic look at MoviePass’s stock right now! Did I also mention there was a point where MoviePass ran out of money so the service ended up crashing? Did I also mention that you can’t now go see big release movies in their first couple of weeks? Sorry, “The Meg,” a shark might have just chomped on you! That shark by the way, was “MoviePass!” I’m honestly gonna be shocked if MoviePass makes it until the end of the year. If they have some miraculous maneuver I don’t know about, I’d love to hear about it. There’s more to say about this and how MoviePass chooses to deal with this sort of thing, but we’re not gonna get into that, instead, let’s talk about another company that has grown in terms of popularity when it comes to going to the movies, Atom Tickets. 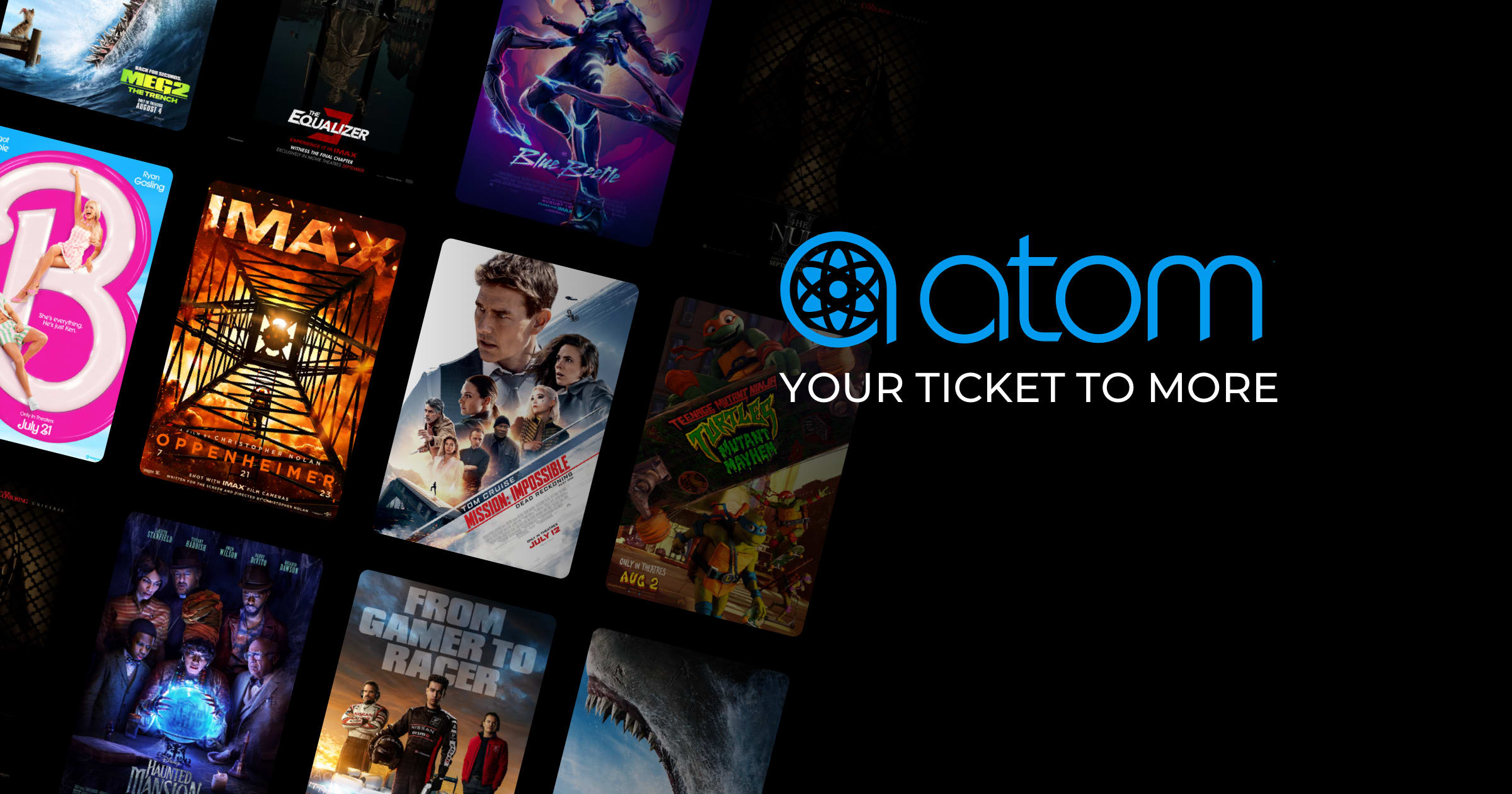 Atom Tickets is a service that sells tickets to screenings at movie theaters. So basically, they do the same thing as Fandango or Movietickets.com. I never used Atom’s service, mainly because I actually have a Fandango VIP account, so I’m just utilizing that whenever I can. Although Atom is doing something that I will give them every inch of credit for, and that is this new sweepstakes which is the main topic of this very post. Ladies and gentlemen, boys and girls, I give you… “Atom’s Breakup Sweepstakes!”

There are a number of things to be said about this. Is this going a little overboard about a company dying? Maybe. But there is no denying that this sweepstakes is just plain genius and kind of badass! It almost makes me forgive Atom Tickets for making that over the top and stupid commercial with Anna Faris. I could provide a link to it, but for the sake of the world’s sanity, I’m not going to.

How the contest works is that you have to be a legal resident of the United States, although if you’re in Rhode Island, Puerto Rico, or other US territories, you’re unfortunately not eligible. You must enter by August 31st at 11:59PM PST, either on Twitter or through a handwritten note with some information related to your name, date of birth, etc. If you choose to enter on Twitter, you must use the hashtags #MOVIEPAST and #ATOMSWEEPS. The winner will receive one free movie ticket a day, and the ticket’s value is at $12 per movie. The approximate retail value of this prize overall comes out to $4,380. What you essentially do is take a picture of you cutting or carving up your MoviePass card for others to see! That. IS GENIUS. This almost reminds me of something that Sprint did earlier this decade, where they have you bring in your wireless bill to a Sprint store and they cut your rate plan in half. I specifically recall commercials of people with chainsaws literally slicing paper.

This sounds like a fantastic deal, because I was actually thinking at one point of signing up for one of MoviePass’s competitors, AMC’s A-List, which I have talked about on here. But I have yet to do that, and I ultimately don’t know when I will. Granted, this summer alone, I’ve gone to see nine movies in the theater thus far. Six of them were at AMC locations. In fact, one time I could have actually used AMC’s A-List deal, because their thing is to provide a maximum of three movies a week, and I did go see three movies in one week at an AMC. But considering that one of my favorite theaters is not owned by AMC, I didn’t want to risk losing any sort of opportunity of going to or supporting that theater. In fact, that theater doesn’t even accept MoviePass so that kind of says something. Although they do accept another MoviePass competitor, Sinemia, but that’s somewhat irrelevant.

Now, I must not forget one thing. There’s something I didn’t mention that is very important. The most important thing you need for this contest, is of course, a MoviePass card. And since I never got a MoviePass subscription, I therefore don’t possess a MoviePass card. But some of you reading this might actually have one, in which case, go nuts, do whatever you want with it. But I’m almost thinking of doing something in particular since I don’t have one. I’m thinking of buying MoviePass.

At this point, it’s possible that maybe I could buy the entire company, but since I’m not stupid, I’m not going to do that. What I’m thinking of doing is getting a MoviePass card, that way I can receive it in the mail, open up whatever container it comes in, grab my scissors, and cut it up just so I can enter the contest! I mentioned earlier that MoviePass costs $9.95 per month. That’s for the “movie a day” plan if that’s even a thing anymore. But they also have a cheaper plan worth $7.95 per month, which came about from the recently mentioned “three movies a month” thing MoviePass did at one point! Since MoviePass in terms of value is probably worthless at this point, I might as well go with the worthless price and pay the $7.95 deal! Although then again, it also says I can cancel at anytime, so whaddya know?

One thing to also consider is that this contest already started on July 31st, and it ends on August 31st at 11:59 PM on the Pacific coast. One thing I asked myself was this: How long does it take for a MoviePass card to arrive? According to their website, it should arrive around 7 to 10 business days after you order. So I’ve got plenty of time! Right now it’s August 5th! August 31st is 26 days away! Sorry MoviePass, but your business days are also might help Atom’s business days!

Part of me can’t believe I’m saying this, but IF MoviePass goes under, I might talk about them on here once again. In all seriousness, they had a GREAT idea, but it was poorly executed business-wise. Part of me somewhat regrets not getting them, but at the same time, I also feel proud of myself because of some of the things they’ve done. MoviePass probably has very little time left as a company, so if they’re going to go under, I don’t know when such a thing will exactly happen. It might be in the next couple of days, weeks, maybe even a month from now. But if I were you, if you think MoviePass is not worth having anymore, I wouldn’t PASS up this Atom Tickets opportunity. Thanks for reading this post! If you want the official rules and guidelines regarding this sweepstakes, I’ll provide a link down below for you to read, and in all seriousness, whether or not you like MoviePass, you have to admit, this contest is just absolutely brilliant. Moving away from MoviePass and Atom Tickets, I would like to remind everyone reading this Scene Before post that this site has its own Facebook Page! There’s a link for it below, please click on it, like it, follow it, do whatever you do. Also be sure to follow me here on Scene Before through a WordPress account or an email that way you can stay tuned for more great content! I want to know, are you going to be entering this Atom Tickets contest? Or, if you had MoviePass, tell me what you like or don’t like about it. Let me know down below! Scene Before is your click to the flicks!