This “Mamma Mia!” installment might as well only be made because of how much money the first one actually made. Based on words I’ve heard just the other day, I’ve been totally shocked by the numbers of the first “Mamma Mia!,” finding out it has actually brought in a total of over $600 million at the worldwide box office. Funny enough, it was never #1 at the box office on ANY of the weekends of its run! Seriously! “Iron Man” came out the same year, it was #1 on both its opening weekend and its second weekend, and yet it still made less than “Mamma Mia” did during its entire run! Now that we have that we have this sequel, I must ask… Will the box office numbers be as high as this film, or is this one giant fluke? The answer, will have to wait because this movie, when it comes to its official public release, is only a short number of days old. Another question I found completely unanswerable is “How was the movie?”

Upon walking out of the theater, I couldn’t even answer how the movie truly was. I could confirm I didn’t like it, I thought it was somewhat flawed. But at the same time, it was kind of fun. This movie is not necessarily just another bad movie, it’s also the kind of bad that to me, didn’t really make me hate myself. But part of me wondered why. Sure, maybe certain musical segments were well choreographed, I guess there were some chuckleworthy moments here and there, and there was also times where I just admired the main locations of the film. In fact, part of why I actually enjoyed myself very much may have been due to watching the film in the IMAX format. If I went to see “Mamma Mia!: Here We Go Again” in a regular theater with a normal screen, I would have probably enjoyed myself a bit less than I did in my circumstance of viewing this film. I had low expectations going into “Mamma Mia!: Here We Go Again,” and just because I enjoyed myself, doesn’t mean I thought the film was anywhere near absolute perfection. It just means I don’t want to bang my head on a wall for an hour.

The biggest problem I have with “Mamma Mia!: Here We Go Again” is just that it’s kind of confusing. Granted, part of it be my fault as a viewer, because I’m willing to bet if I saw the first film, this sequel would be a lot more crystal clear. I won’t go into detail because the movie just came out and not everyone has seen it yet, but I just felt like there were maybe a huge amount of clutter in terms of characters, plot lines, etc. Granted, you can argue “Avengers: Infinity War” has that same issue, but the thing is, that movie plays out like a TV show. Everything has been leading up to it, if you’ve seen MCU movies released prior to that one, you’d probably have some sort of connection with the characters based on their journeys, and the way the screenplay and direction came together in that film made it feel like a thrill ride. “Mamma Mia!: Here We Go Again” expands the story of the franchise, but it does that by including something that doesn’t really have much stakes attached to it. For a film like this, that might be a weird complaint, but I just didn’t really care for anyone in this film. Again, I didn’t watch the first installment, so I may be cheating with that statement. But I just found this film boring at times because it felt like it was a story that just had so much going on with occasional interruptions from musical numbers.

If you know me in person, chances are you’d know that I love thinker movies, I love movies that make you figure out what’s going on, movies that don’t give you all the answers right away, movies that rely on being complicated therefore making them come off as a fun puzzle. I love movies that don’t make you feel stupid! Although, one complaint I can’t believe I’m saying here is that I thought this movie was a bit more complicated than it had to be. Was it intentional? I doubt it. In fact, I feel like the only real intention of this sequel was to get money. This movie goes back and forth in time, only to make me wonder which character is which, and which part of my brain hurts the most. I think if the movie really wanted to tell its story from a perspective that goes over both the past and present, it should have really had some more work done during the edit. What should have been done is if you want to go over a past event, you should color grade or put a filter over the footage to make it look old-timey. I wouldn’t call something like this dumbing down, but I would consider it to be hint of help or aid for those who don’t even know what’s going on.

As far as the movie’s characters go, I’m not even gonna go into detail about a lot of them. To make a long story short, most of them are rather quirky, and have their own individual qualities that make them who they are. If you’re expecting to see Meryl Streep in this movie, you do get her, but as far as actually getting HER, don’t expect much. Because the movie mainly focuses on a younger version of her character (Lily James). 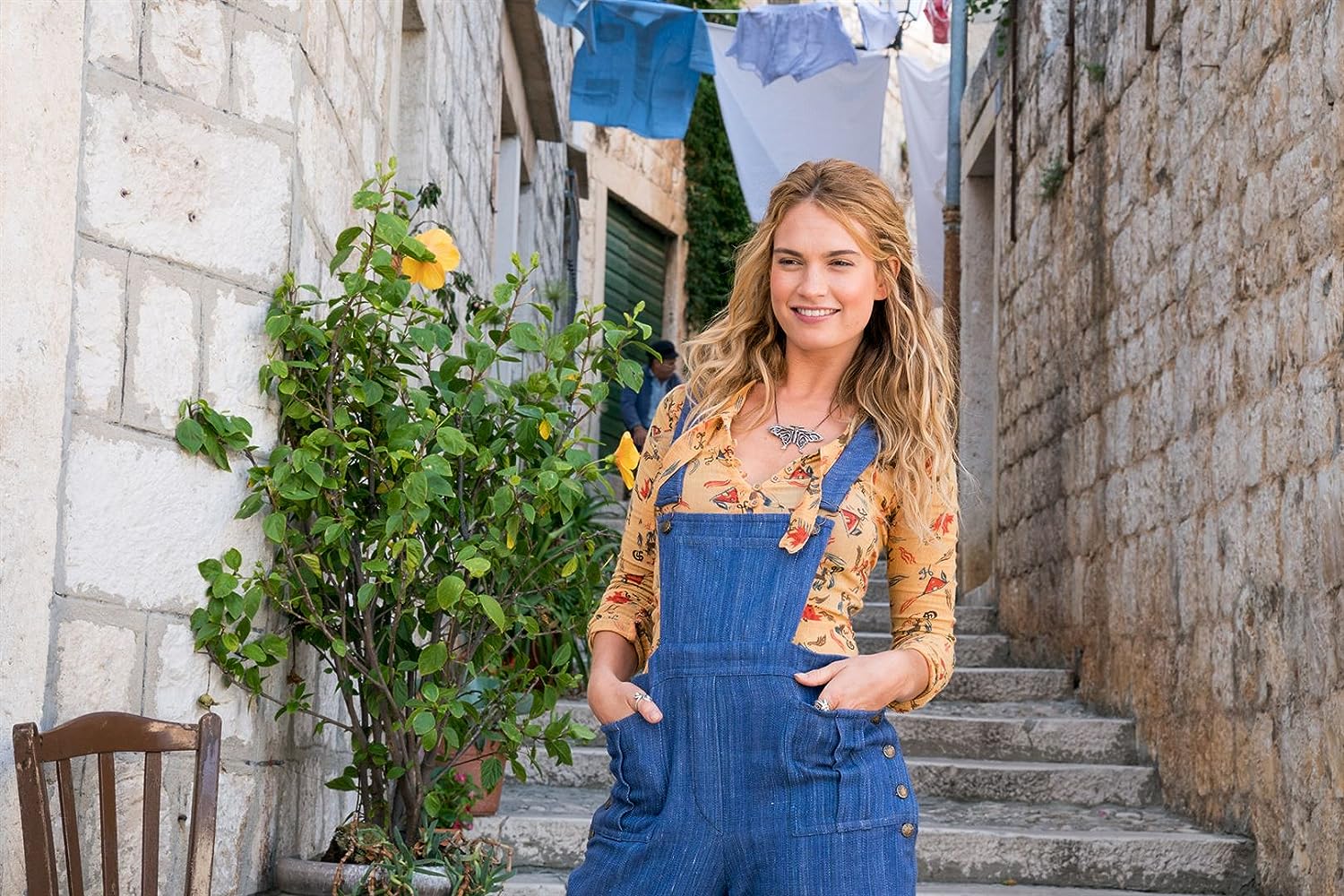 Having seen Lily James play this younger version of Donna, I can kind of buy into her interpretation of the character, and I’d say she did a fine job with the role for the most part. But in all seriousness, this does beg a question. The question I have to ask is… Is Lily James the next Meryl Streep? Granted, you don’t really need to be a powerhouse actor to be in a movie like this. It’s recommended, but that’s not the biggest thing that I’d say you need. In fact, in some cases, your ability to sing would probably have a higher importance. I do think Lily James is an alright actor. I haven’t seen her in much, but I’d say she’s an alright actor nevertheless. But here’s the thing, will the Academy see this movie and forever think of Lily James as that one actor to nominate every single year no matter what she does? I’m not sure how much longer Streep has in terms of her career, but if you consider how many times she’s been nominated for some award throughout her life, it only makes me wonder how many James is bound to get down the road.

But in all seriousness, I feel like the only things I can truly appreciate in “Mamma Mia!: Here We Go Again” is that it exceeded my expectations, it was well choreographed at times, and it had some neat location choices. Other than that, it’s just a bunch of sequences shot on a camera placed together in a certain order for the sake of calling something a movie. It’s not good, and while I’m not in the target audience, I gotta be honest, I just didn’t think this was worth my time.

In the end, “Mamma Mia!: Here We Go Again,” spectacle-wise, doesn’t fail to impress, but on every other level, it’s not on par with what I’d call a proper movie. I mean, it has its audience, they might as well enjoy the film, good for them. This movie to me however, it was boring, although in reality, it ended in a much quicker rate than I thought it would. Maybe it’s because it almost felt like nothing happened. If it weren’t for a few pluses sprinkled in or seeing this movie in IMAX, I probably would have lost all sanity. With that being said, I’m going to give “Mamma Mia!: Here We Go Again” a 4/10. Thanks for reading this review! This Wedneday I’m going to see “Skyscraper,” so expect a review for that pretty soon, and speaking of that, be sure to follow my blog so you can stay tuned for more great content! I want to know, have you seen “Mamma Mia! Here We Go Again,” what are your thoughts on it? Or, which of the “Mamma Mia!” films do you like better? Let me know down below! Scene Before is your click to the flicks!