“Guardians of the Galaxy Vol. 2” is directed by James Gunn, the guy who also directed the previous “Guardians of the Galaxy” film, and stars Chris Pratt, Zoe Saldana, Dave Bautista, Vin Diesel, Bradley Cooper, and Kurt Russell as the heroes we know from the comic books along with the first movie as they face their next mission. The team of a-holes who now occasionally fight crime, take down monsters, and retrieve various important items for money stumble upon Star Lord’s father, and some other s*it happens.

Now let’s just get into something real quick, the original “Guardians of the Galaxy” is one of my favorite comic book films in recent years. It wasn’t the best of the year it came out, that personally belongs to “Captain America: The Winter Soldier,” but still, it was one of the most fun, action-packed, and hilarious movies of that year so I was able to appreciate the movie for those aspects which it delivered on. Do you get that in this movie? You certainly do. Although with that being said, this movie is not as good as the original. Also, it’s not as good as a lot of other movies in the MCU. Also, before we get into the characters and all sorts of other s*it, I do want to talk about something concerning this movie.

A little while ago, I managed to see some news that this movie was going to get five post-credit sequences, I actually did a post on it (link to that post below) and as a service to my fans (if I have any), I would like to report that this statement is in fact true and not just a random rumor floating around the Internet spreading like memes, cat videos, or Donald Trump’s tweets. I won’t go into any detail, but if you are into the after credits stuff and you think this movie is gonna contain one or two scenes, you’re wrong, stay a little longer, in fact stay until the very end, just do it, because that’s how long these scenes go on for.

Chris Pratt returns in this movie once again as Peter Quill, AKA Star Lord. If you remember the first scene in the original movie featuring this character as a kid, that’s something that actually comes into play during this movie, and it kind of made me feel emotions for the character during the film, and you know something? I was not expecting to care much for Star Lord with his father in the mix, I had no idea what to expect going into the auditorium, but what I got was actually kinda surprising.

Speaking of Peter’s father, let’s talk about his character. In this movie, Peter’s father who happens to go by the name of Ego, is in the movie for a large chunk of time. Honestly, I thought this character was gonna be just some guy Peter meets in the middle of the road, boy was I wrong, this character was more than that, as this movie goes on the guy actually becomes more likable as a character which completely shocked me. Also, the father-son relationship between Peter and Ego brought some weight to the movie and boosted the movie in terms of its likability. 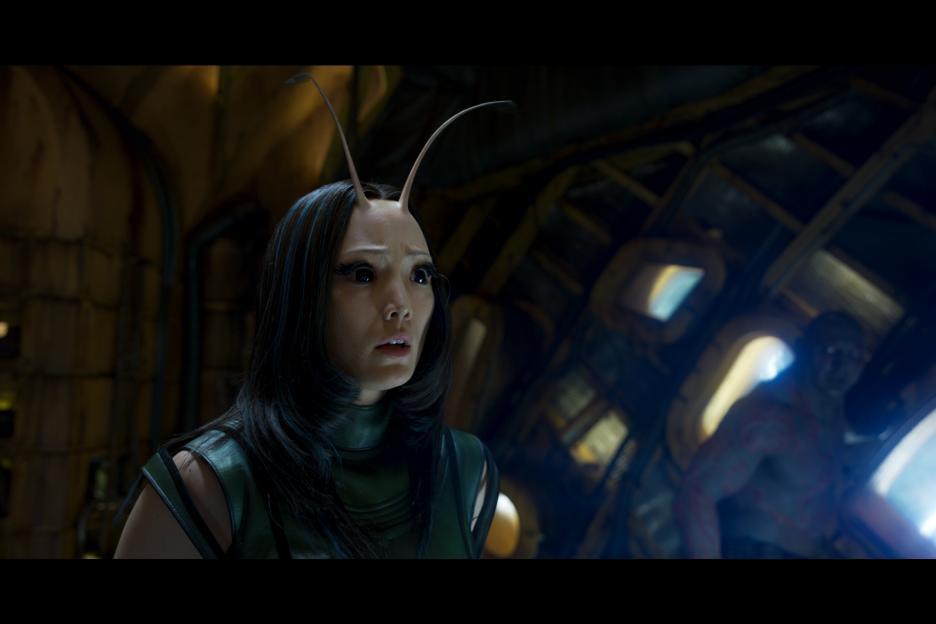 On the subject of new characters, let’s talk about Mantis, and no, not the one from “Kung fu Panda,” that’s a guy. This Mantis, played by Pom Klementieff, can touch someone and sense their feelings. If you remember that trailer for the movie that came out at the end of last fall, the scene where this is exposed was shown in that, despite how I knew this scene was coming, seeing it in the theater was hysterical that I couldn’t help but laugh hard. Mantis in my opinion is one of the more likable new characters in the movie and I gotta say, I love her voice.

Another new character I want to talk about is Baby Groot. Going into this movie, I was worried that this movie was gonna give this character too much screen time simply to show off his cuteness. I know some people were expecting him to be cute, I heard some folks say he was in fact cute. Was he cute? Sure, I mean, I don’t go for cuteness or anything, and I wasn’t oohing and ahhing at Baby Groot, although I heard a few people doing that during the movie. I will admit, some of the cuteness represented in the film was kinda forced. For instance there is this one scene where a crash landing is occurring and it just randomly cuts to Baby Groot on the ship eating something that either looked like some random candy I never heard of or jelly beans.

Also, you may have seen these gold people in the trailers for this film, I don’t even give a flying crap about their names because I didn’t really care for them in the film, might as well show that here. I guess I’ll just call them the Golden Girls, yes, there are guys, but still, why not call em the Golden Girls? They were kind of a threat at one point in the movie and that’s basically all you see when it comes to these characters, I didn’t latch onto them or gain any sort of amusement from watching these characters, in fact, personally, THESE CHARACTERS WERE WORSE THAN RONAN, and that character was cliche as hell! I mean, these characters were not cliche, they were just bad.

Also, Rocket in this movie, he’s awesome once again, I must admit, he’s more quotable and funnier in the original, much like some other characters in this film, but still, I’d say Rocket applies here as well. Although that doesn’t mean he doesn’t bring any humor at all to appreciate, there’s this one ongoing gag where if you call him a (insert random animal name here) he would get really pissed. He also starts a gag about another character in the film called Taserface, which is off and on in terms of successful hilarity, but when it’s on, IT’S ON.

This next section is dedicated to the characters of Gamora and Nebula. I talked about Gamora in my review for the first film, but I left Nebula out considering how forgettable she was to me. You may already be aware of these two characters being the daughters of Thanos, which you’re unfamiliar with Marvel…

he’s basically the result of Barney the Dinosaur getting killed and getting reincarnated as a dick with a minor eating disorder. Anyway, the relationship between Gamora and Nebula is fleshed out more during this film as opposed to the original, but in the end, I didn’t really care for it. Also, let me just say once again, Gamora’s a badass, and as I’m writing this review right now, I kind of feel like I have a crush on her as a character. I don’t know, maybe it’s because she’s green and it kind of makes her stick in my mind more. …I don’t know if you’re thinking what I’m thinking but I’m thinking I kinda sound like a pervert right now (laughs)…

One of the biggest surprises to me in this movie was Drax. I liked this character when he was in the first movie, but I do think he could have been written a little better, despite being rather quotable, I think there’s not many problems with this character here. There are multiple scenes where this guy laughs, and hearing it is basically music to my ears. Also, some of the lines uttered by this character are some of the best things about this movie.

Let’s also talk about Yondu, I wasn’t into this character as much as some others, and I will mention that when this character first appeared on screen, it was like watching a cartoon when hearing his voice. That illusion dwindles overtime, but I had that thought on my mind when watching this movie. However, this character was serviceable and I can’t say I’m too pissed about him. If you have seen my review for the original “Guardians of the Galaxy” I mentioned the soundtrack was one of the most interesting parts of the first film and something that made it so fun. This movie also relied partially on the soundtrack and the sound choices in this film were good, but not as good as the first one. In one of the trailers, the song called “Fox on the Run” from Sweet was featured in it and I was kinda disappointed that it wasn’t in the movie, honestly, I would have liked that. I don’t listen to that song much, but I think it would have fit in this film quite a bit.

Another thing I talked about in my review for the first movie is the visuals, I pointed out that the visuals in the first “Guardians of the Galaxy” are some of my favorite in the MCU, personally, these visuals are better. Not as good as “Doctor Strange” though. I will say that there’s one scene where ships are swarming all over the place, the visuals were well-polished there and while there was a lot to look at, I couldn’t complain because what I was looking at was dazzling. Also, I just want to say for the record, I was in the front row, in an IMAX theater.

I will say, the humor in this movie, is not as good as the first one, and that’s a real disappointment because the humor in the original movie is part of what made it so great, so naturally, you’d expect this movie to follow up with some amazing humor. It does at times, and sometimes it just made want to shoot myself. Also, I will state for parents watching this, if you want to take your kids to see this film, be careful, because it has a penis joke and there’s probably even one scene that can give some younger minds some ideas on how babies are made. One part of the humor I thought was forced was one segment when they were throwing in toilet humor, it seemed like something that was just randomly thrown in to make younger audiences laugh and keep them from getting bored. If I remember correctly, I don’t think there’s one time in the MCU aside from this film which toilet humor was actually used.

In the end, as far as Marvel movies go, this film could have been a lot better. Would I watch this movie again? Sure, I’d definitely buy the Blu-Ray considering I have an MCU collection which is near completion, but if there were a time I’d watch this movie, it would either just be when I want background noise, or if I want something to fall asleep to. I do like a number of the new characters, but all in all, this film was a major disappointment, I mean, it’s not deplorable, but by MCU standards this was not fabulous. I’m going to give “Guardians of the Galaxy Vol. 2” a 6/10. Thanks for reading this review, if you want to see my review for the original “Guardians of the Galaxy,” it’s actually my last post, so chances are, you’ll find something that can lead you to it. Also, I’m gonna be continuing my series of Spider-Man related reviews pretty soon. This month I’m gonna focus on “Spider-Man 3,” which hopefully I can review next week, we’ll see what happens. Stay tuned for that review along with more reviews coming up! Scene Before is your click to the flicks!