“Guardians of the Galaxy” is directed by James Gunn, who wrote the screenplays for the early 2000s live-action “Scooby-Doo” films, and stars Chris Pratt, Zoe Saldana, Dave Bautista, Vin Diesel, and Bradley Cooper as five criminals are placed together to save the universe from a strong and vicious warrior named Ronan. 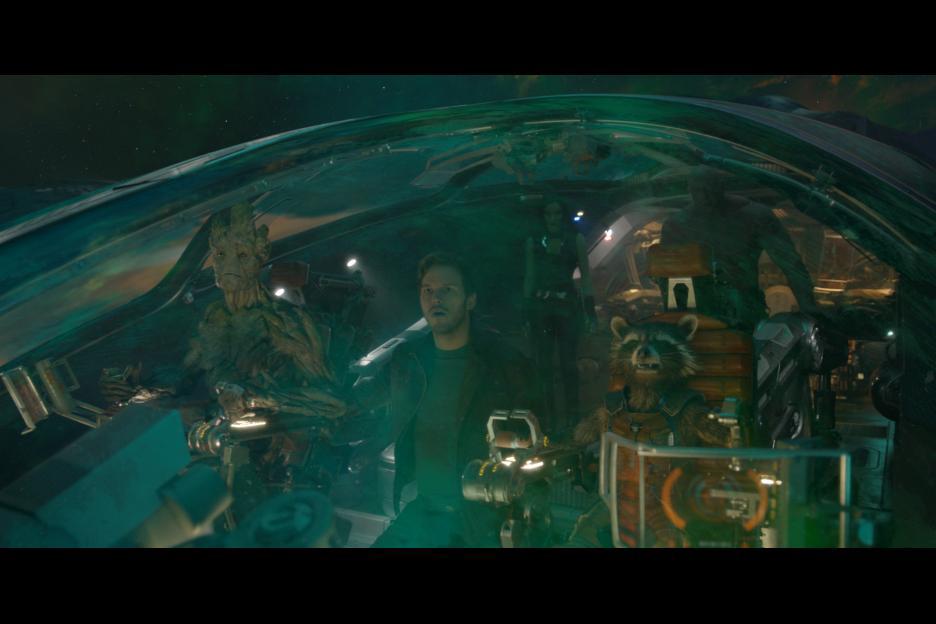 When this movie hit theaters in 2014 it was a gigantic hit. It was loved by Marvel fans and traditional moviegoers alike. Out of all the movies in the MCU, I’d be willing to bet this is the one will most likely appeal to kids based on the content shown in it. Also, if there was one movie in the MCU that I believe knows how to have fun throughout, this one takes the cake. Speaking of things that are fun, the hilarity in this movie is present much more here as opposed to any other film in the MCU, and it actually really works here. I remember when I saw the first trailer for the film on my cell phone and a lot of people were saying that they were skeptical towards the humor put in the film and thought there was too much of it. I had an open mind and I thought it was gonna work. Well look what happened! It did!

Chris Pratt plays the lead hero in this movie, in real life, he’s known as Peter Quill, but he’s also known as Star Lord. When you first see Peter as an adult, it just suddenly turns into a funny, entertaining, and engaging introduction to such a lovable character. Sure, you see him as a kid at a first, but still, you get a scene that not only sets a tone for the character, but basically the movie as a whole. It’s got funky music, humor, while at the same time, sticking to the story and not jumping off.

This character shown above, Gamora, is played by Zoe Saldana, who you may know as that blue chick from “Avatar,” Neytiri. I will say when it comes to looks and how the character is shown in action, this character is the one I prefer. She was raised by the character of Thanos, which if you are unfamiliar with Marvel, Thanos is basically the winner of the purple dickhead contest. A lot of the scenes Gamora’s actually in, are entertaining and there’s one scene where she is in with Starlord, actually I take that back, two scenes to me that are highlights of the film in terms of hilarity. These two scenes both mention “Kevin Bacon” by the way, so let’s say that if you have seen this movie, you’d probably know which two scenes I’m referring to.

Let’s get into the character of Rocket. Rocket’s basically a raccoon. If you ask me who the funniest character in the movie is, chances are I’m gonna say Rocket takes the cake. Granted there are plenty of characters in the film who are in fact funny, but if I had to choose one, this fellow’s the winner. He’s also probably the most badass of the bunch as well. There’s one scene where the characters are on an escape mission and he has a weapon, he just goes “Oh…yeah.” Then he just shooting everywhere in sight. The first time I saw that in the theater, I thought I was watching a “Call of Duty” film, I mean, it would be more likely to relate this to a film with a 12 year old boy playing “Call of Duty” or something.

Next up we have Groot, played by Vin Diesel. In the movie, he’s basically a tree that assists Rocket in one way or another, like if you watch the movie you’d probably notice the size of Rocket as opposed to the size of Groot, Rocket’s very puny and Groot’s very tall, so you may notice in the movie that Rocket is on Groot’s shoulder when he’s in action at some moments. Also, it’s kind of funny seeing how Rocket can understand what Groot is saying, after all, pretty much the only thing you can hear Groot say is “I am Groot.” It’s basically the “Hodor” of the Marvel Universe.

Another character I want to dive into is Drax the Destroyer, to be honest, this character wasn’t exactly as memorable as the other characters, but then again, you couldn’t really get to see him as much because he shows up around the 30 or so minute mark in the movie. Dave Bautista actually did pull of the guy as a hero, and despite what I said about lack of memorability, I will say that much like a lot of the other characters in the movie, he actually managed to be pretty funny at times. Also, I will say, having seen the movie a few times now, the fact that Dave Bautista was a wrestler, probably makes his character slightly more badass. It’s kind of like Dwayne Johnson in the “Fast and Furious” movies.

While I may sound like someone who is extremely optimistic, let’s get into one of this film’s biggest problems, at least to me, that, is the character of Ronan, played by Lee Pace, who you may know as Thranduil, Legolas’s father, from “The Hobbit.” Wow that was way more commas than I would’ve imagined. In this movie, Ronan is the main antagonist and the way he acts is pretty cliche, I mean, the way it is represented in this movie doesn’t really piss me off or anything, it’s just something that irks me. Although I will say, my hate for this villain isn’t really anything new when it comes to Marvel, when it comes to the MCU, the villains are either cliche or forgettable, this one is both because I barely remembered him a while after the movie came out. At least I still remember Vanko from “Iron Man 2,” at least I still remember Bucky from “The Winter Soldier,” at least I still remember Loki from “Thor.” This is one reason why I loved “Captain America: Civil War” which came out last year quite possibly more than any other film in the MCU, there was no technical villain, it was two sides of the Avengers fighting each other.

Another thing I want to talk about is the soundtrack, unlike all the other Marvel Cinematic Universe movies, it relied much upon the soundtrack when it comes to putting in songs from various artists. Sure, the first two “Iron Man” films put in some ACDC songs here and there, but all in all that was about it for relying on outside music. The song choices in this movie fit each scene and they were fun to listen to. You have songs such as “Come and Get Your Love” by Redbone, “Hooked on a Feeling” by Blue Swede, and “Cherry Bomb” by the Runaways. 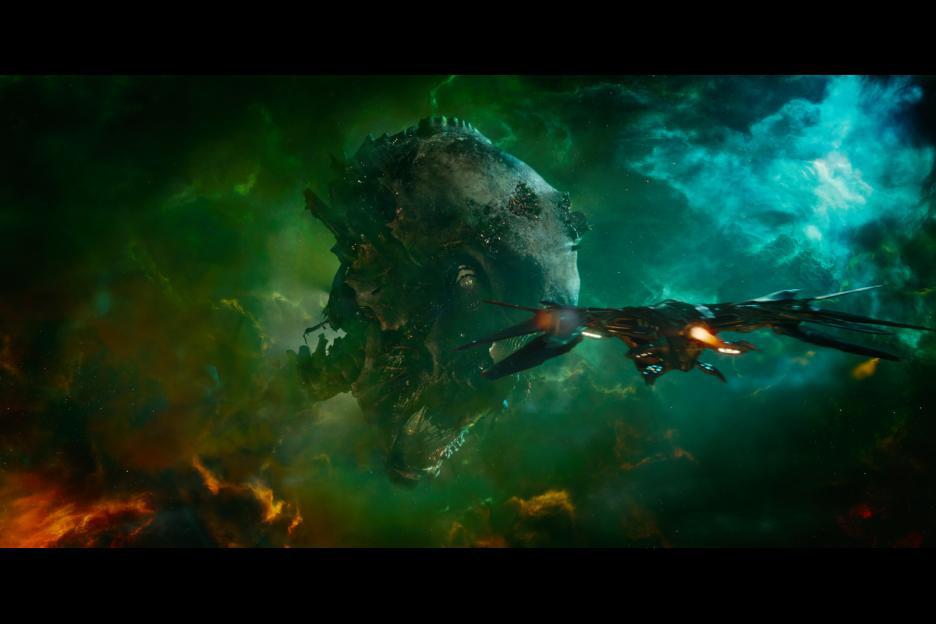 Also, another thing I want to point out, in terms of visual effects, this is one of the better films in the MCU when it comes to that aspect. It has a somewhat futuristic feel to it on some of the planets, and at times, it is some of what you expect out of a sci-fi, which isn’t terrible at all, because it is pure eye candy. I don’t know if it’s as good as “Doctor Strange,” another film in the series, but still, it still delivers well-polished looking visuals throughout the feature.

So, is “Guardians of the Galaxy” one of the most fun comic book movies to date? Yes. Is it by any means the best of all time? No, and it’s also not the best in the MCU, I’d say it has some problems, like with the cliche villain and some forgettable characters, however I can’t help but be entertained throughout this movie. With these problems, I can still say that “Guardians of the Galaxy” still passes the border to receive a final verdict of 9/10. I honestly don’t know if I’m keeping this score, it might drop to an 8 sometime soon, but this movie gets a lot of points for entertainment value. Thanks for reading this guys, tomorrow I’m actually gonna go see the sequel to this film, “Guardians of the Galaxy Vol. 2,” please look forward to my review for that, it is my 2nd most anticipated movie of the year and I can’t wait to review it for you all! Stay tuned for that and more reviews! Scene Before is your click to the flicks!