“Sing” is the newest animation from Illumination Studios, the creators behind “Despicable Me” and “The Secret Life of Pets.” In this movie, a mouse named Buster Moon, played by Matthew McConaughey, is the owner of the Moon Theatre. This theater has been around for quite some time, but it has not been all that successful in terms of the performances and venues that are done there. So in an attempt to receive a rise in attendance and success, Moon decides to do a singing competition, and throughout we get a movie about a bunch of animals who are aspiring to become the next big singer and win $100,000.

While I watched the movie, one of the things that stood out to me is how many key characters there were in this movie. Now in my opinion, I ask you, what other movie seemed to have too many key characters to make it so convoluted and disastrous? That movie my friends, is “Mother’s Day.” If you have seen my top 10 worst movies of 2016, that movie was actually on there. Why? Well I kind of just explained it to you so that’s kind of an odd question to answer right now. There are other reasons too but that’s just one of them. Did the high amount of characters in “Sing” bog down the movie? I wouldn’t say it did. Based on the personalities of all these characters, I was able to get into all of them and understand the way they feel without getting bored.

In terms of describing these characters, let’s start off by talking about the movie’s main character, Buster Moon. I think Matthew McConaughey is a fine actor. As far as I know, my father says otherwise, but that’s his opinion. How is he in this movie? Well, I enjoyed his character, and the voice that Matthew provides in this movie, which is really just a slightly more hyper and fast version of himself, worked for his character. I was able to understand his character in this movie and I thought one line in this movie, is something kids should pay attention to and keep in their minds. “When you hit rock bottom, there’s only place to go, and that’s up!”

Let’s describe two more characters: Rosita (played by Reese Witherspoon, center) and Gunter (played by Nick Kroll, left), I decided to dedicate this section both characters at the same time because they’re both pigs and they do a lot of stuff together in the movie. First I’m gonna talk about Rosita. She’s a stay at home mom with 25 kids. Her husband (played by Nick Offerman) is at work all day and she basically stays home and takes care of the kids, gets them ready for school, etc. I really enjoyed her character, and if any stay at home mothers go see this movie with their children, I have a feeling that this character will resonate with them. Rosita is also in an act with Gunter in the competition and Gunter, according to this movie’s universe, is rather eccentric. Also, one thing I enjoyed about Gunter is that he gives one of the funniest lines in the movie. There’s this one scene where Rosita and Gunter rehearse in front of Buster and Miss Crawly (played by Garth Jennings) and Rosita falls to the ground. After that, Buster asks if Rosita is OK, and instead of having Rosita respond, Gunter, standing next to her, jumps in and responds by saying “Oh yes, I’m fine, thank you. How are you?”

One other character that stood out to me was Johnny the gorilla (played by Taron Egerton). I thought his character was well written and the most interesting thing about this character is his unsteady relationship with his father, Eddie (played by John C. Reilly). It somewhat made me think what it would be like if some family had a tradition or business, and then their offspring decides they don’t want to follow that particular path and they choose to follow a different path instead. 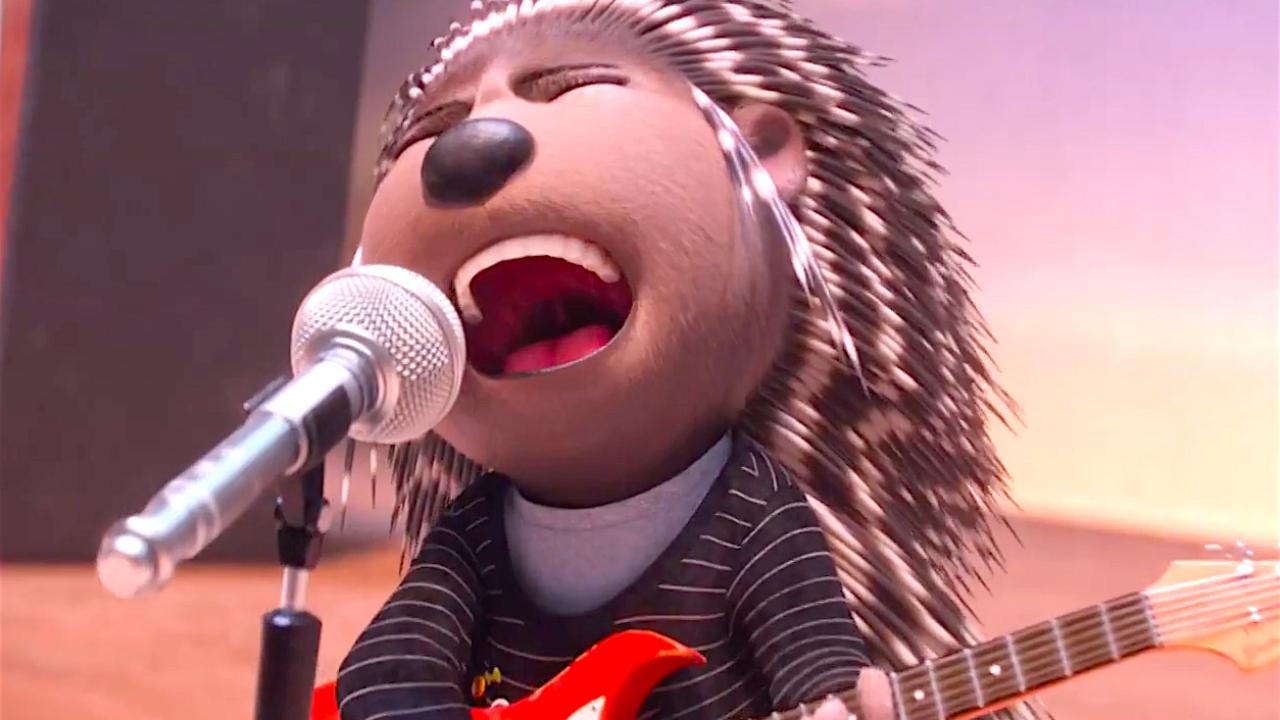 One of my favorite actresses working today is Scarlett Johansson. I love her as Black Widow, she’s a fine looking actress, and based on work she did for “The Spongebob Squarepants Movie” which came out in 2004 and this year’s “The Jungle Book,” I’d say she knows how to do a good voiceover as well. She played a character in this movie named Ash and I was surprised how well Johansson could sing. She played a moody teen in the film and it certainly worked for her character. 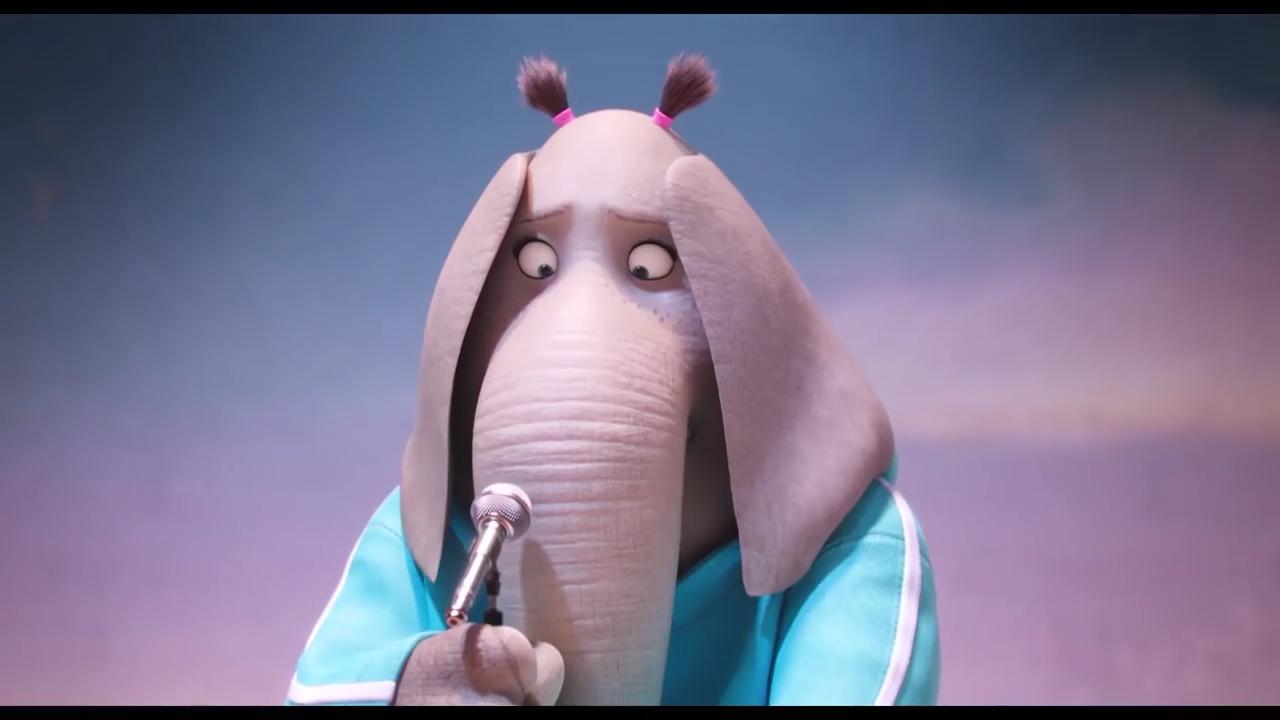 Last but not least when it comes to characters, I’m gonna talk about the character I was looking forward to most walking into this movie. That is Seth MacFarlane’s character, Mike. In case you never knew, Seth MacFarlane is one of my all time favorite celebrities. I love “Family Guy,” even in the later seasons which everyone says is not as good as the earlier ones. I also enjoy watching “American Dad,” and I like his movies. I don’t care what ANY OF YOU think of “A Million Ways to Die in the West” and “Ted 2,” I enjoyed those films! In this movie, MacFarlane plays an egotistical mouse that seems to put everybody down and doesn’t seem to make anyone feel better. In a sense, it’s almost like he’s the villain in this film, but he really isn’t. There’s no technical antagonist in this film, but out of everyone in the movie, he was probably the most vicious character.

I want to talk about 2016 and animations. While 2016 itself probably hit everyone in some negative way, we can probably all agree when it comes to animated movies, it made the year slightly better because there were so many good ones. Granted that doesn’t mean there weren’t any that were absolute s*it. In fact, “Ice Age: Collision Course” made my top 10 worst list of 2016. Also, while I didn’t see all of “Norm of the North,” I’ve seen enough of the movie to know it’s just awful (based on a video from YouTube user Bobby Burns). Although when comes to the good animations I saw this year, FOUR animations made my top 10 best list of 2016. Is this good enough to change that list? No, although it doesn’t mean the movie wasn’t enjoyable. Speaking of my top 10 best list, this is not official, but I might make a change to it and put “La La Land” on a lower spot on the list, but that’s undecided at the moment. Just figured I’d let you all know.

“Sing” is a very good animation. It manages to take so many characters and somehow make each and every one enjoyable. Also, these characters are played extremely well by a undeniably well chosen cast. Not to mention, when it comes to catering to children and adults, there is a fine line between the two demographics so the overall film works for everyone. I’m gonna give “Sing” a 7/10. I’m glad I got to see this movie, and I certainly hope 2017 can also give us some animations that just as good as the ones that were given to us in 2016. I have so much faith in the upcoming “The LEGO Batman Movie” so hopefully that can be a good start for the genre. Speaking of upcoming movies, I hope to see “xXx: Return of Xander Cage,” which comes out in just a few days. I still need to see the second “xXx” movie before that, but hopefully I can find time to see that film and see the new one which comes out Friday. Stay tuned for more reviews and I’m glad the 2016 animations are even great at the end of that particular year. Scene Before is your click to the flicks!