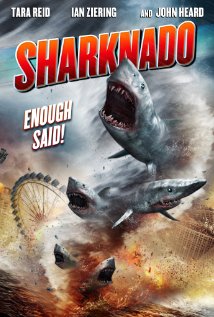 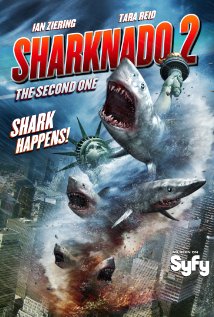 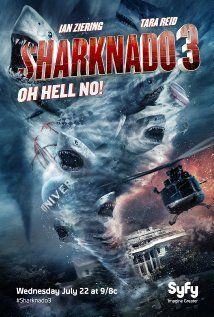 The series of Sharknado is known for some of the most absurd movies known to man. It follows a formula of developing the story from the beginning, until one moment, shabam! A sharknado ensues!… Which by the way, if you cannot tell by the name already it’s basically a tornado filled with sharks that are able to breathe on land, for some… apparent reason…? Whatever, it follows a formula. Until today, the only Sharknado film I’ve seen in full length was the first movie. I watched part of 2 and pretty much all of 3 today before this movie premiered in the US at 8/7c on Syfy. When I say pretty much all of 3, I mean that as in, I had it on through the entire runtime, but there were certain chunks where I muted the TV and never paid attention (left TV on as a visual reminder of this movie). By the way, when I saw the first movie, I actually didn’t watch the actual movie, it was on RiffTrax (From the folks of Mystery Science Theater 3000), and they roasted the movie from beginning to end. As far as it’s absurdity went, it was pretty humorous at times, and it didn’t really make me angry… unlike this tuna scented CGI and cheese fest. 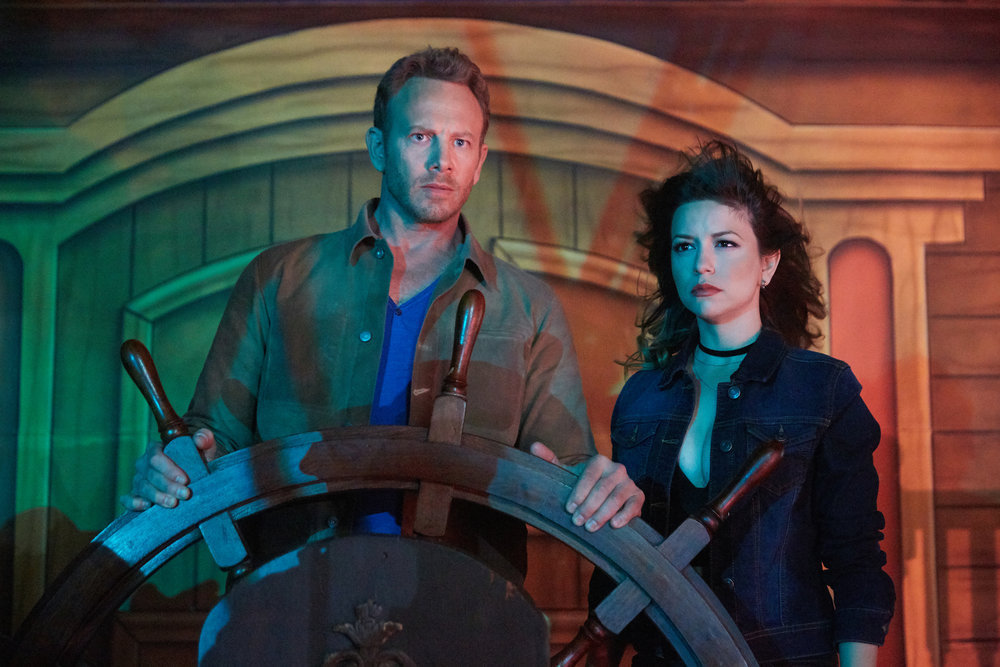 This movie stars Ian Zierring and I didn’t really care about the guy that much. Then again I didn’t really care about anyone in this movie. I only cared about one character, but I can’t talk about that character, otherwise I’d probably be the equivalent of a party pooper. If you saw the movie, you’d probably know who I’m talking about. Almost everyone in this movie felt like an object in front of a camera, there was little to no reason to care about them except that they could die. Maybe part of it has to do with this being the only full length Sharknado movie I’ve watched. When it comes to characterization in this movie, it’s not to die for, then again it was never what the people who wanted to see this asked for, so it’s kind of understandable. 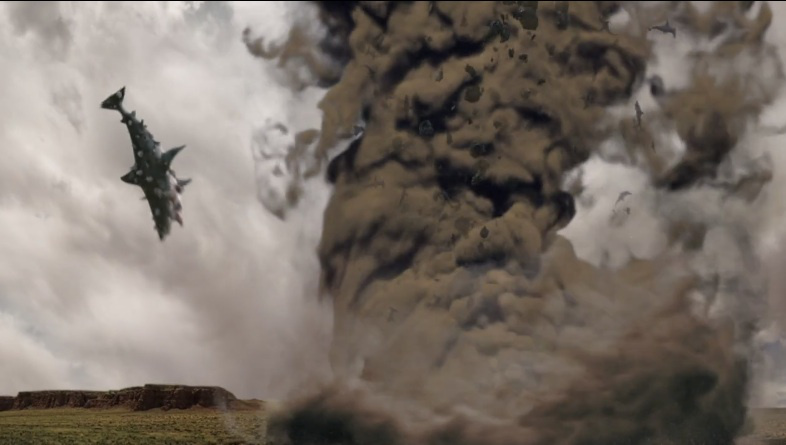 This movie, like its predecessors is BLOATED with CGI. There is CGI EVERYWHERE I look. You have sharks flying everywhere in tornadoes (obviously), it looked far fetched and overdone, you also had cows flying in tornadoes, you had a lot of things flying in tornadoes. The blood in this movie is over exaggerated to the max, and it feels unnecessary at times to have someone spill as much blood as they are in this movie. It all looks absurd and illogical, but at least the movie is doing its job. Although that’s the thing, the movie does its job, but when it does its job, it doesn’t feel natural, it feels more like a cartoon or a simulator that is called a simulator but in reality, it “over simulates.” The past movies did this too, and I’m going to use the first one as an example here. This worked in the first Sharknado because I felt more connected to the characters (I’m surprised to even say that) despite not having a good knowledge who any of them were, or their names. Not to mention with all the CGI, science is thrown out the window (I KNOW, NOT THE FIRST TIME). I saw a shark coming out of a tornado and falling into water. Based on how high the shark was in that moment, and the force of the tornado, the shark’s fall I saw there was too quick. I can imagine some people would like this, but not me. It felt like it was going to give me a headache. During the first tornado scene, I saw a car spinning on the road doing multiple 360 spins and all of a sudden the car stops in the middle of the road. I don’t have the scene in front of me like the previous one mentioned, but with the amount of time between each 360 is complete, the car wouldn’t stop spinning as fast as it did. There’s more in the movie, but I don’t want to waste time.

Let’s talk about some of the cameos in the movie. You’ve got everyone from the Today show (again) and they are in some chunks of the movie. David Hasselhoff was also in this movie two, and I was livetweeting on Twitter while this movie was happening, and it seemed like everyone who joined the Twitter conversation was excited to see him. I don’t know if some of you probably wouldn’t consider this a cameo because she’s not as famous as some other people, but Mindy Robinson (King of the Nerds, Samurai Cop 2) was in this movie. We kind of know each other on Twitter, and I’ve seen her work so I was kind of excited to see her in the movie. For the few seconds she’s in, she was interesting to watch. My favorite cameo of all has to be Gilbert Gottfried. He plays this over the top reporter and he uses his over expresses everything he says. “It’s a COW-NADO!” That might just be the best line in the movie. By the way, in that same scene, there was a reference to Twister. 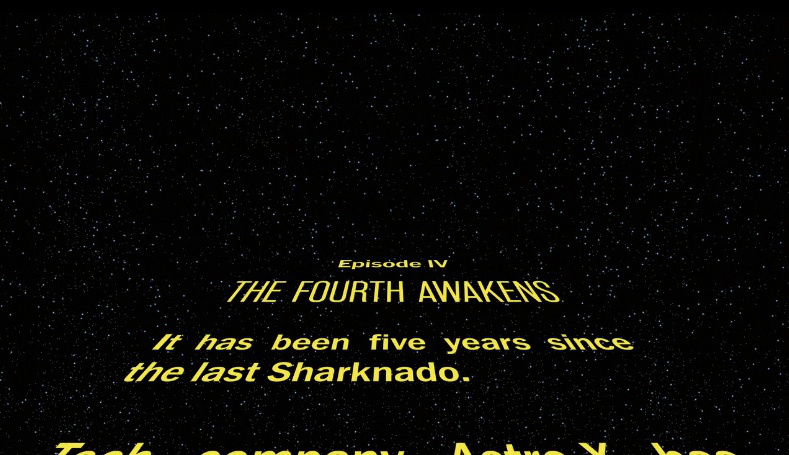 Speaking of Twister, there were tons of pop culture references in this movie. Instead of cheering or smiling in excitement whenever I heard references to other portions of media, I couldn’t help but find no positives within its use. Probably the only reference to get a smile out of me was the first one, which was a “Star Wars” styled intro, even though they never had their own version of “A long time ago in a galaxy far far away.” They could have probably put in “A long time ago in a land that became an ocean” or something along those lines, just a suggestion. A lot of the references here felt out of place or just fell flat. There are references to “Raiders of the Lost Ark,” “The Wizard of Oz,” “Network,” “Ghostbusters,” and more. 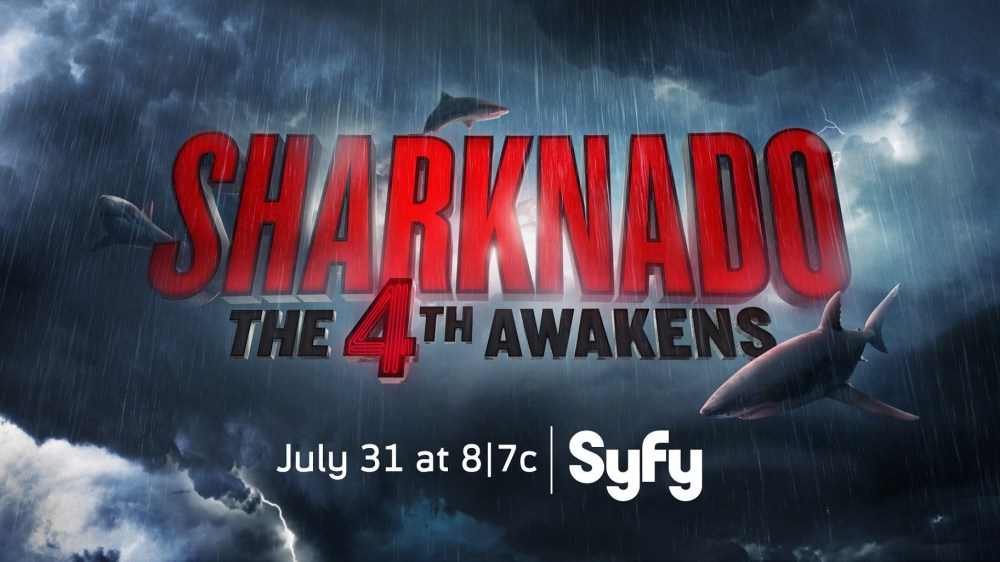 I honestly don’t know what else to say except that this movie features the most annoyingly obvious product placement for Xfinity I’ve ever seen. It becomes more annoying because I saw Xfinity commercials TWICE per break during the premiere of this film. Other than that, there’s not much else. This movie tries to be so bad that it’s good, but as far as it goes, it never even reached that level. It’s just terrible, and I’m saying that even with the absurdity the first movie had that made me think it’s bad that it’s good. Did the movie do it’s job of being absurd? I guess so, but it wasn’t likable absurdity, it’s absurdity that made me angry inside and got me closer to blowing the hairs off my body. For now, I’m going to give Sharknado 4: The Fourth Awakens, a 1/10. I honestly had trouble deciding where to put this on a scale of 1-10, and I’m willing to bet that this will change to a 2. Then later, it’ll go back to 1, then back to 2, and so on. Why? As I mentioned before, the movie did it’s job, but it did its job poorly, and that’s why I’m giving it a 1 for now. I recently saw “Hail, Caesar!” and I’m planning to review it, it came out months ago, and I watched it for the first time recently. Also, I’m planning to see “Suicide Squad,” which comes out Friday, August 5th. I don’t know if I’ll be there opening weekend, but maybe I’ll be there and get an early review up, perhaps I’ll maybe even get a chance on Thursday, when they do the premiere showings, we’ll see what happens. Scene Before is your click to the flicks!