“The Burnt Orange Heresy” is directed by Giuseppe Capotondi (Berlin Station, The Double Hour) and stars Claes Bang (The Girl in the Spider’s Web, The Square), Elizabeth Debicki (The Great Gatsby, Everest), Mick Jagger (Being Mick, Running Out of Luck), and Donald Sutherland (The Hunger Games, Pride & Prejudice). This film revolves around an eccentric, mysterious art critic by the name of James Figueras who is hired to steal a rare painting. As the movie moves along, he becomes greedier by the second. Simultaneously, he is romantically involved with a woman named Berenice Hollis.

Oh yay! Another movie that we can see in theaters! 2020 is turning around!

…Sort of. Not really. It’s still a crapfest all around and we just have to live with that! Boohoo. 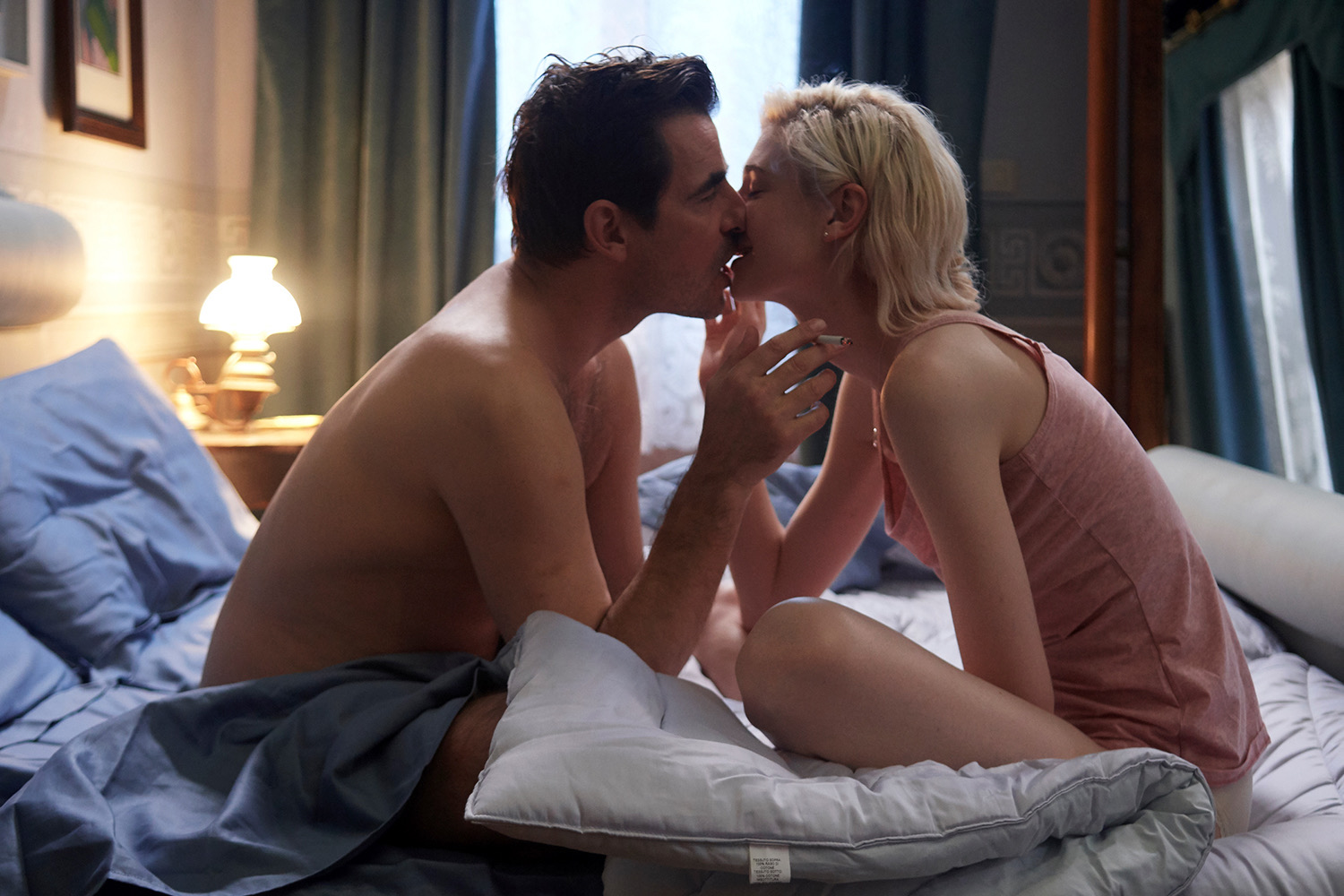 “The Burnt Orange Heresy,” much like a lot of other movies I have seen so far this year, is a film that I really did not know much about going into it. All I really knew about the film is what I’ve read regarding it on IMDb and one or two other sites. I knew it got some attention already through festivals. Apparently, based on how IMDb lists the film as being released on March 6th, 2020 in the U.S., this thing has been theatrically released already. In fact, its distributor, Sony Pictures Classics decided that they’d hold onto the film and avoid putting it on VOD despite how many other films at the time such as “The Hunt,” “Bloodshot,” and “Onward” were going in such a direction. As of today, “The Burnt Orange Heresy” is a film that can ONLY be watched in theaters. As for when it will hit stores and digital services remains a mystery to me.

Walking out of “The Burnt Orange Heresy,” I cannot say I’m disappointed. Partially because as mentioned, I did not know much about the film going into it. All I really gathered regarding it was the basic gist and concept. “The Burnt Orange Heresy” is a sensual, mysterious flick, which kind of makes sense as it does take place in Italy, which from my experience is an often romanticized country. In fact, let me just say, I am not dating anybody. Now that we are in the middle of a pandemic where everyone is supposed to socially distance from each other, I don’t really think I should be dating anybody, but I thought that if you are in the right mood, this could be an alright pick for a date movie. Granted, this movie is also not for everyone, as it does feel fairly artsy. Almost in the high-brow category if you will. Then again, this is a movie heavily involving art and someone trying to steal a rare painting, so it kind of adds up. 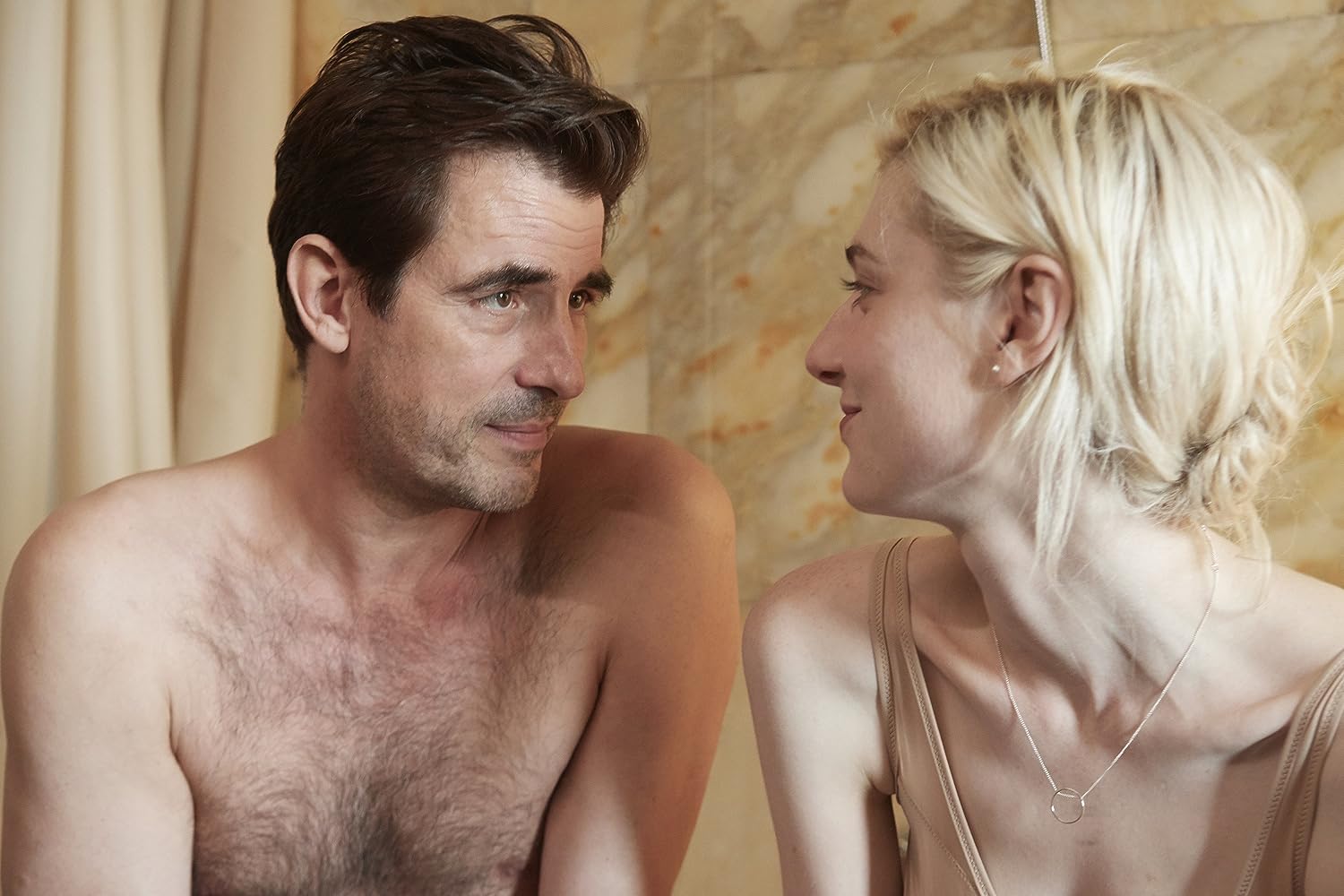 I really think the best part of the movie is the chemistry between the main romantic couple, specifically played by Claes Bang and Elizabeth Debicki. Their chemistry is some of the best I have seen in recent memory in regards to a relationship. Every one of their actions, even if it goes to a point of slight exaggeration, felt kind of raw. Again, this is kind of a sensual movie during a few bits and pieces, even if that is not what it is trying to present itself as in the long run. 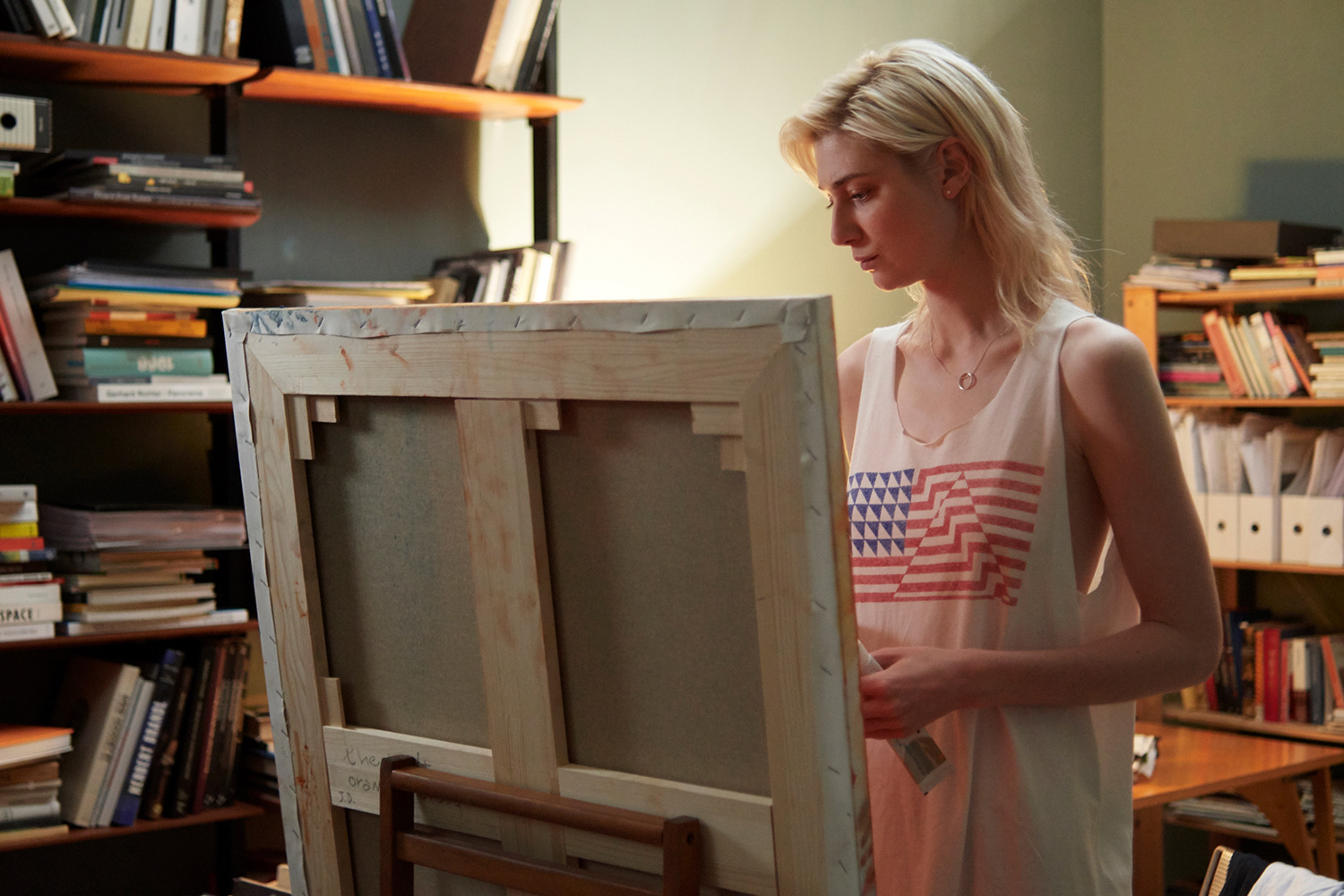 Also, gotta admit, Elizabeth Debicki may be a new celebrity crush of mine, and based on her acting chops, I cannot wait to see her smash the role she’s got in “Tenet!”

I also liked the main character himself, again, played by Claes Bang, an actor who I am admittedly not familiar with at all. This movie starts off with a pretty sharply edited opening scene where Claes Bang’s character, James Figueras, is on his exercise bike in his private quarters, but simultaneously, he’s lecturing to an audience about a painting.

To save some of the mystery from you, the people reading this… I will not go into much detail about the scene itself, but it is a great way to not only start the film, but get a sense of our main character’s personality. What’s he like? What does he do? What are his mannerisms? Just in the first five to ten minutes of this film, I felt like I’ve already gathered a terrific sense of who exactly this character could be, or who he is trying to be. He’s mysterious, he’s quirky, I kind of wanted to know more about him. Sure, maybe on the surface he kind of looks like the dad from “Modern Family,” but as far as his traits and personality go, that is something that I wanted to be somewhat unraveled as we go along. 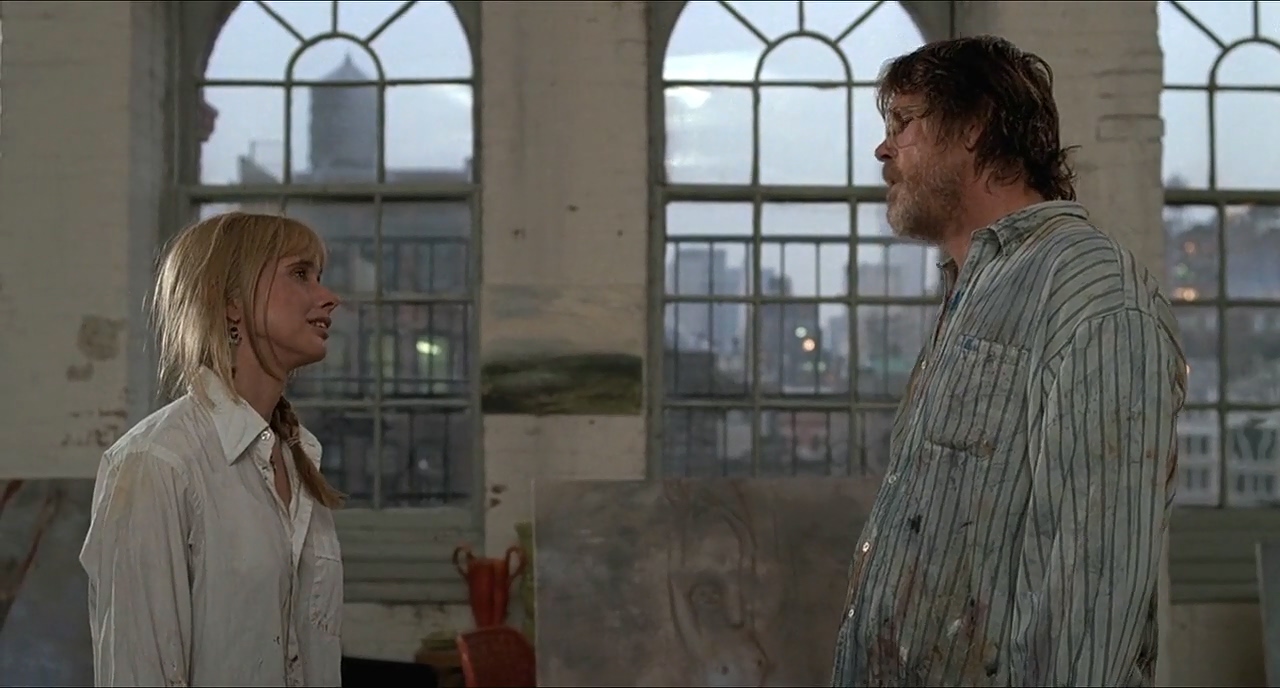 As I watched “The Burnt Orange Heresy,” it reminded me of one thing more than anything else. That my friends, is “Life Lessons,” the short film directed by Martin Scorcese as part of the “New York Stories” set. For those of you who don’t know what that is, “Life Lessons” is a film about an eccentric painter, who lives with his assistant as their relationship begins to spiral down the drain. Granted, the relationship seems to be working a lot better for both sides in “The Burnt Orange Heresy,” but I would not be lying if I told you that I did not make such a connection with these two films. Both of these films feel fairly dramatic, romantic, and occasionally a little bumpy. I will say, and this is somewhat forgiven as “The Burnt Orange Heresy” is a feature and “Life Lessons” is a short, but “The Burnt Orange Heresy” feels a bit on the slower side compared to “Life Lessons.” Without spoilers, the way certain events play out in both these films feels like they are a couple with their differences, but nevertheless happy to be together.

I said this once, I’ll say it again, this film is not for everyone. This film is almost on the verge of being kind of eccentric, and some will find it pretentious or high brow. But for me, I enjoyed myself. It is a film that I probably will not end up watching every day, but if I were to have it on, I would most likely not use it just as background noise. I also think that when it comes to how this film is edited overall, it is one of the finer editing jobs I have seen this year. A lot of the scenes are interwoven nicely and nothing really feels out of place. I’d give this film a thumbs up. 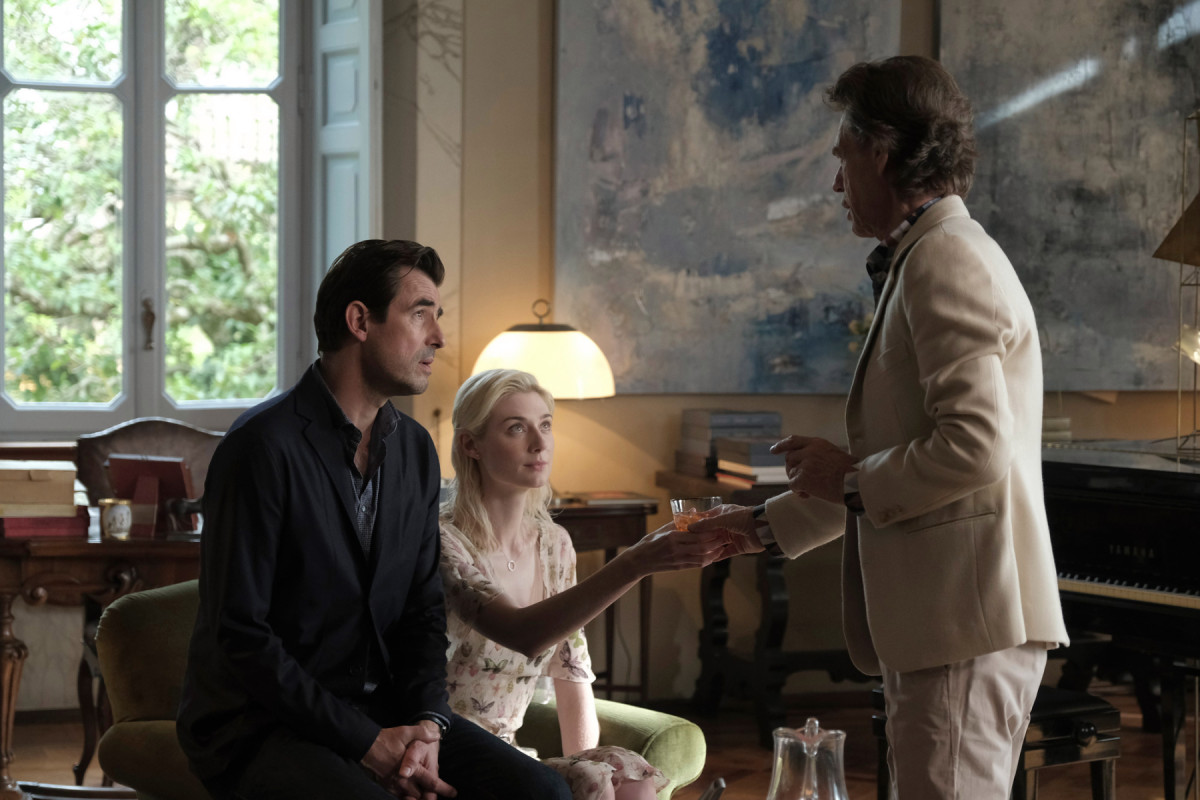 In the end, “The Burnt Orange Heresy,” despite what I just said about probably not wanting to watch it every day, is a film that I’d probably check out a second time because it has a vibe that feels cleansing and smooth to the brain. Plus, despite being an hour and thirty-nine minutes, there may be one or two things that I missed on the first viewing that I may want to pick up again. Maybe the dialogue went over my head or something, I don’t know. Nevertheless, this is good enough for a repeat viewing. I’m going to give “The Burnt Orange Heresy” a 7/10.

Thanks for reading this review! I just want to let everyone know that I have a few new Blu-rays lying around for possible reviews, but HBO Max has just released an original film starring Seth Rogen by the name of “An American Pickle.” If I get the chance, I might just talk about that for an upcoming review, but who knows? Anything can happen in 2020. Be sure to follow Scene Before either with an email or WordPress account so you can stay tuned for more great content! Also, check out the official Scene Before Facebook page! I want to know, did you see “The Burnt Orange Heresy?” What did you think about it? Or, what is your favorite movie set in Italy? Let me know down below! Scene Before is your click to the flicks!