“Vivarium” is directed by Lorcan Finnegan (Foxes, Without Name) and stars Imogen Poots (28 Weeks Later, Green Room) and Jesse Eisenberg (The Social Network, Now You See Me) as a couple who want to purchase a house. An agent shows them a house located in a quiet, seemingly peaceful area. Oddly, just about every house is identical and every aspect of the neighborhood feels like something specifically crafted for a lower budget, artsy Tim Burton picture or something. …Maybe the 2018 film “A Wrinkle in Time.” That one in particular is done by a different director, but nevertheless. As the couple tour what’s marked as house #9, they eventually find themselves without the agent, trying to escape the neighborhood. They never manage to find their way out. After the endless search, they find an infant, and are given instructions… “Raise the child and be released.”

Oh parenting, the hardest task in the world. Here. We. Go.

2020 has been a strange year. There has been talk amongst film fans, including myself, on what Best Picture could end up being. “Sonic the Hedgehog,” should nothing else arrive, could end up being a big contender. “The Invisible Man” has received plenty of positive verdicts. Honestly, with all things considered, I wouldn’t sleep on “Impractical Jokers: The Movie.” That is… if I controlled the Academy and had all the power. Love those guys. But one of the lesser talked about films of the year is this little flick called “Vivarium.” Prior to today, the film has a box office total of $123,044. I knew very little about the project, despite how it has some notable names attached. Although I did buy the Blu-ray, popped it in the player, and watched the movie later on. Do I regret watching it? Not really… But… Kinda.

Let me just say, as a movie from a technical standpoint, “Vivarium” is very pleasing. I like the production design and framing of the film. It very much reminded me of a Tim Burton project like “Edward Scissorhands” if it were set in a slightly more modern time. The movie has this blend of fantasy and touch of reality that gives it its own unique feel. I kinda dig it. I think all the actors including Imogen Poots, Jesse Eisenberg, and Jonathan Aris did a really good job playing their respective roles. They were all believable and well cast. If I were to watch this in a theater, I’d probably do my best to stay quiet and admire all the detail as things go by on the big screen. Although, I cannot see myself watching this movie many more times in the future. One of the most controversial movies of the past year is Ari Aster’s “Midsommar.” For the record, I liked Ari Aster’s directorial debut, “Hereditary,” so I figured “Midsommar” would be a worthy follow-up to what he has provided in the past. I was wrong. It turned out to be one of the most insufferable film experiences I have put myself through in recent memory. Like “Vivarium,” “Midsommar” looked pretty appealing and had fantastic design to keep me gazing on the screen. It even had a good cast, I think Florence Pugh is a likable actress. Although if you ask me, I’d recommend an alternate film of hers to watch, “Fighting with My Family,” directed by the very talented and hilarious Stephen Merchant. But the film annoyed me in the long run. It was a film that tried to be disturbing and haunting, but just ended up feeling overly grotesque and off-putting. And while “Vivarium” feels a lot more tame, it kind of has that “Midsommar” feel. Upon finishing “Vivarium,” a part of me felt a little icky. And that’s a bit odd to say because while “Vivarium” is technically a horror movie, there is not really much that kept me disturbed. Maybe there were some spooks intact, but it didn’t really feel like something horrific or life-ending in a sense. It comes off as one of those artsy films that really tries to go all out there and be as strange as possible. In all likelihood, that may have been what the crew was going for, and in some ways, it works. But there are some cases where flaws happen to stand out.

I mean, no movie’s perfect, but this is a movie that really could have been awesome, but if the script didn’t go a certain way, I probably would have felt a little more satisfied. What way would I have wanted it to go? Well… I can’t tell you. That would perhaps spoil a great portion of the movie. But let me just say one thing, it involves the “kid” character, who I honestly grew to hate by the end of this movie. That’s all I can spit out without getting arrested by the spoiler police.

I like the way that this movie tends to handle parenting because it does go to reveal the disconnect between parents and their kids sometimes. Maybe the parents have a certain thought on their mind which may have to do with “helping the kid” or “doing what’s best for the kid” to which the kid ultimately disagrees or throws a tantrum or something of that nature. This movie sort of reminds me of why I may not want to be a parent anytime soon. 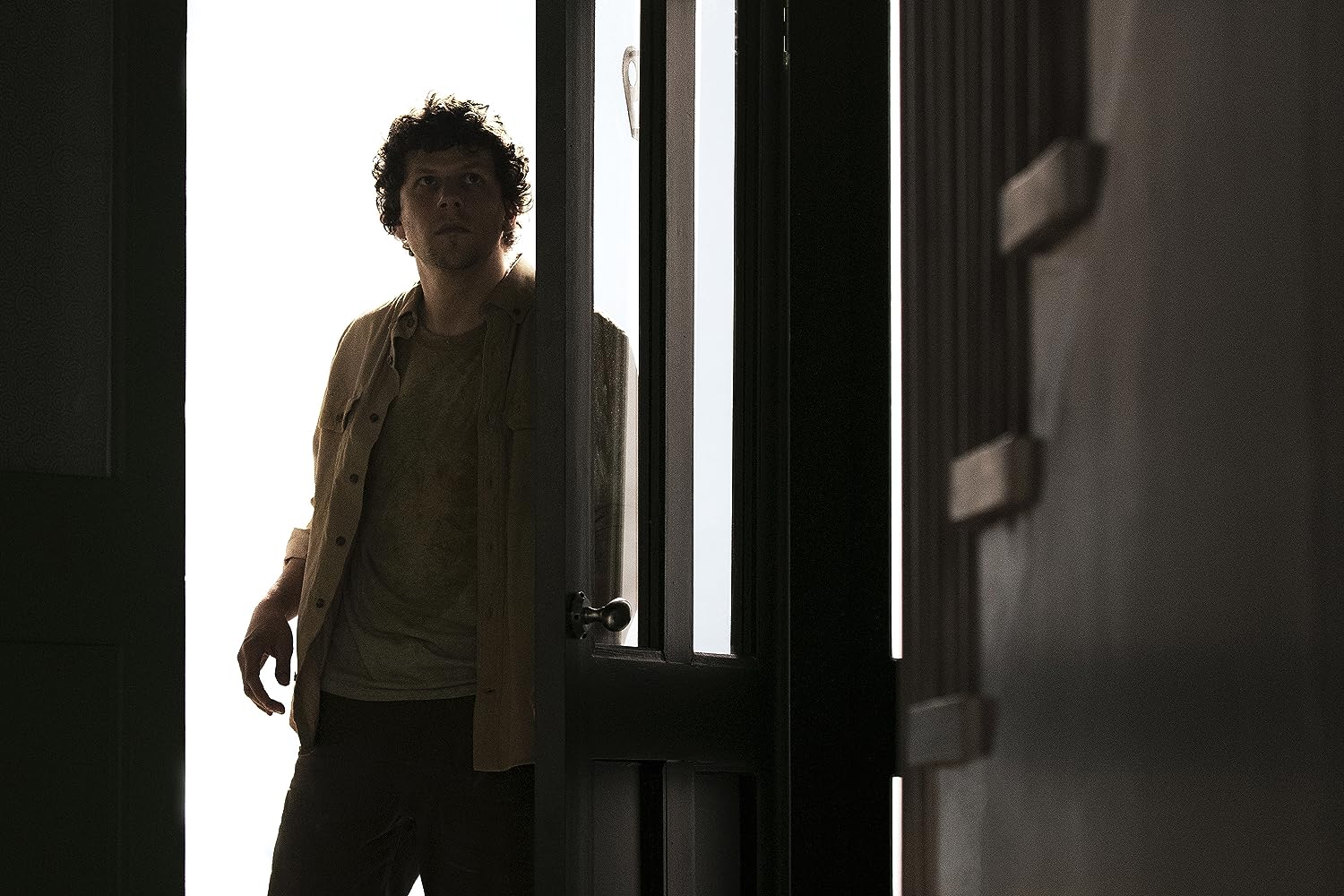 This is partially shown through say the performance given by Jesse Eisenberg, and I think that this is one of his better performances that I can think of if you ask me. Because when I think of Jesse Eisenberg, I will point out, I often reflect upon him in a positive light. I’ve seen him do good things, but he always seems to have this dimension to him that he carries from one character he plays to another. He’s a fast talker, almost to the point of mumbling, and it feels like he often plays a live-action cartoon. It’s like he’s on caffeine for extended periods which makes him rather obsessive and hyperactive. Here, from what I can recall, Eisenberg is calmer compared to other times I’ve witnessed him. Granted, I have not witnessed everything from Eisenberg. I still need to watch “The Social Network,” and not just the first two or three minutes which I think I DVRed one time.

I will say though, I am writing this review at the end of July 2020, and in a way, this movie may get a little too close to home for some viewers. Why? Well, it basically dives into what happens when a couple isolates in a home. Like, you know, just like every single one of us has in 2020. So do I recommend “Vivarium?” I’d say yes, minus the final five to ten minutes which were kind of a letdown for me. But remember, if you stayed in your home for four months, this could be a little bit… I’ll say creepy. I’m just hoping none of you have kids, maybe then it’ll get super creepy.

In the end, “Vivarium” started out alright, became pretty good, but nearly crashed during the climax. I know for storytelling purposes, there’s not really much that could necessarily be changed about the “kid” character, but that kid was one of the single most annoying characters I have seen in a movie in a long time. I get it, but… still, it drives me mad. I’m going to give “Vivarium” a 7/10.

Come on, 2020! Give me something great! Yes! We have “The Way Back!” We have “The Vast of Night!” We have “Hope Gap!” Those are good movies. I want GREAT movies. I think the last great movie I saw that was new may have been “The Farewell,” which technically speaking is a 2019 film even though I watched it in 2020 as I was wrapping my cycle for the 2019 lineup. If “Tenet” doesn’t come out on the first weekend of September, there is no hope left for movies this year. I wish I wasn’t being this dramatic. I want to avoid going into a rant, so… Let’s just move on.

Thanks for reading this review! I’m not sure what my next review is gonna be. I wanted to watch Greyhound on Apple TV+, but I’m trying to figure out the best way to watch it on my TV. After all, my smart platform, which is included with the television set, is Android TV, which of course, is from Google, one of Apple’s biggest competitors. This may be why there is no deal between the companies to have Apple TV+ on the Android TV platform. Nevertheless, if you want to see more great content from Scene Before, be sure to follow the blog either with an email or WordPress account! Also, check out the blog’s official Facebook page! I want to know, did you see “Vivarium?” What did you think about it? Or, how is isolation going for you? Are you still in the house? Are you out and about? As one who lives in the United States, I HATE MY LIFE. That’s all I can say. Leave your comments down below, and hopefully my next blog post will come sometime soon! Scene Before is your click to the flicks!