“Gretel & Hansel” is directed by Oz Perkins, AKA Osgood Perkins (Legally Blonde, I Am the Pretty Thing That Lives in the House) and stars Sophia Lillis (It, Sharp Objects), Samuel Leakey (MotherFatherSon), Charles Babalola (Bancroft, The Legend of Tarzan), Jessica De Gouw (Arrow, Dracula), and Alice Krige (Star Trek: First Contact, Chariots of Fire). This film is based on the classic tale by the Brothers Grimm. This has received adaptations in the past, but this is one of the latest attempts at adapting such material because well, originality is dead. So the best we can do now is take something in hopes of flipping it on its head hard enough to get something different, but also interesting.

Safe to say, this movie… Didn’t do that. I’ll get to that later. 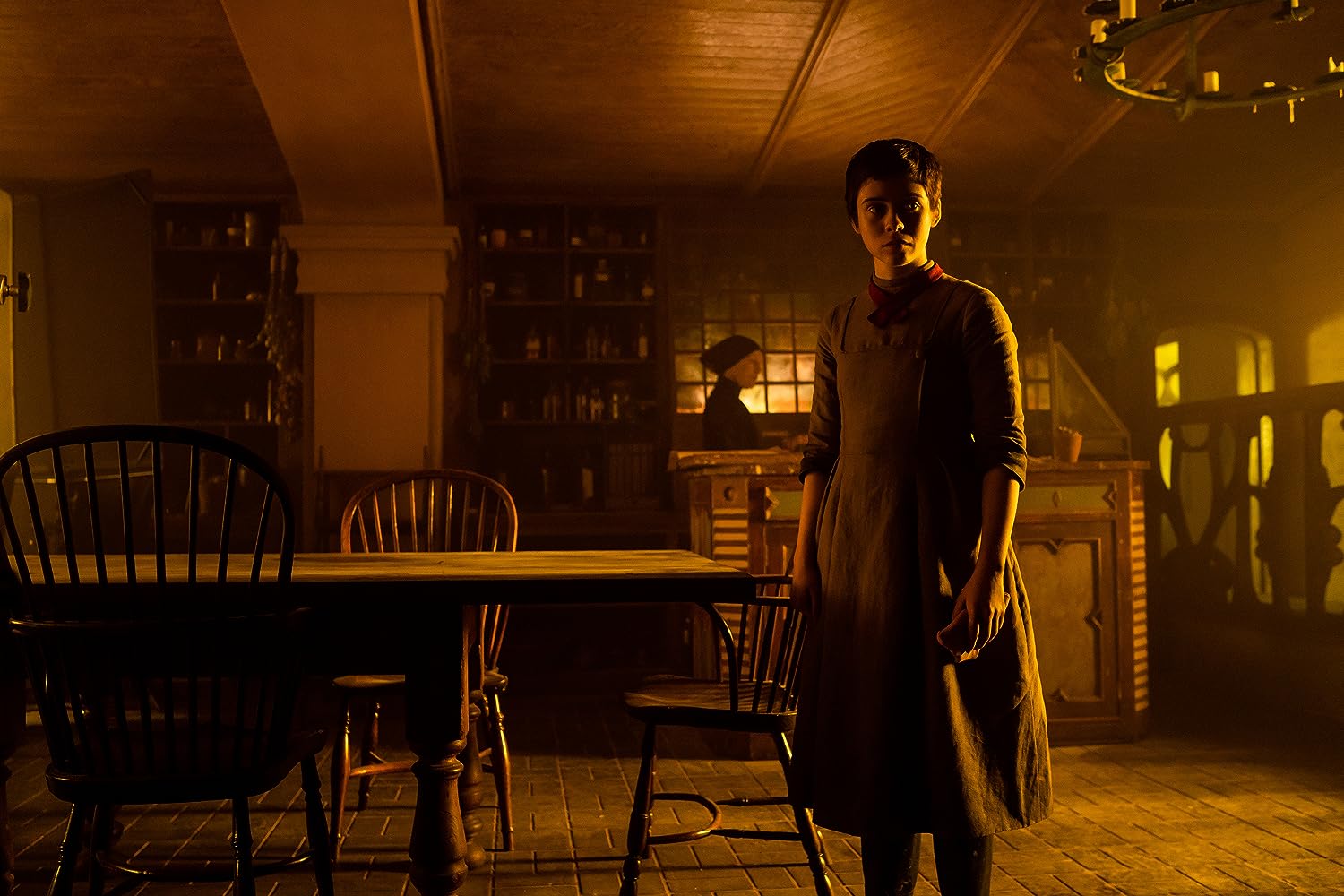 Now, I will be fair to “Gretel & Hansel” here. Because the truth is, I am not that familiar with the material which this film happens to be based on. Have I heard the name thousands of times over the years? Sure. But you can say the same thing about my knowledge of other aspects regarding culture. Things like “Fortnite,” “Stranger Things,” “South Park,” Cracker Barrel, Red Lobster, Fanta, AKA a drink that wouldn’t exist if it were not for ties to Nazi Germany. It’s true by the way, look it up.

Let me just start off by stating some things I like about the movie. Oz Perkins does a really good job at providing an intimate feel to this picture. It made me wonder why I didn’t wait until say September or October to watch this. Granted, this film did come out in January, at least in U.S. cinemas that is, but if it came out in September and October, it would have provided a proper vibe for spooky season. After all, “Gretel & Hansel” is in the horror genre, it is genuinely creepy at times, not to mention kind of quirky, and the environment just screams “autumn.” In some ways, this film reminded me of the 2015 flick, “The Witch.” Now let me just say, I HATED “The Witch” upon my initial viewing, and I still haven’t watched it a second time. But I will admit, the style presented in “Gretel & Hansel” kind of reminded me of that movie. Things that stood out in this context include the slightly less than wide aspect ratio, the bold and nearly colorless grading, and the somewhat extended pace of the film. It all worked… At times.

In other times it was just… BOORRRRRRRRRING!

Wow! I don’t think I’ve nearly come this close to tuning out a movie since maybe “Cats!” But let’s also be fair here, “Cats” is a disaster in every sense of the word that makes all other movies look like Shakespeare. Compared to “Cats,” which is an injection of infinite cyanide, “Gretel & Hansel” is one tiny little dart aimed at your leg. It hurts, maybe you’ll get to the point where you’ll pass out, but you’ll inevitably get back on the horse. Your chances of instant death are significantly reduced.

Nevertheless, I do want to point out, despite the fact that I do appreciate the art of filmmaking itself, not to mention an assortment of motion pictures that are perhaps, intentionally slow, take the “Blade Runner” films and “2001” as just a couple of core examples. I was just bored by whatever the heck was happening during “Gretel & Hansel.” I mean, I got the concept down willy nilly, but the in between of it all was just… tiresome. It’s really unfortunate that the movie just so happens to fall into a mess like this. Because there are several scenes that are visually stunning, not just from a practical perspective, but even some effects that are clearly fantastical manage to pop. There’s a nice blend between the grim–

Wait a minute, is that a pun? I think that’s a pun. Anyway… 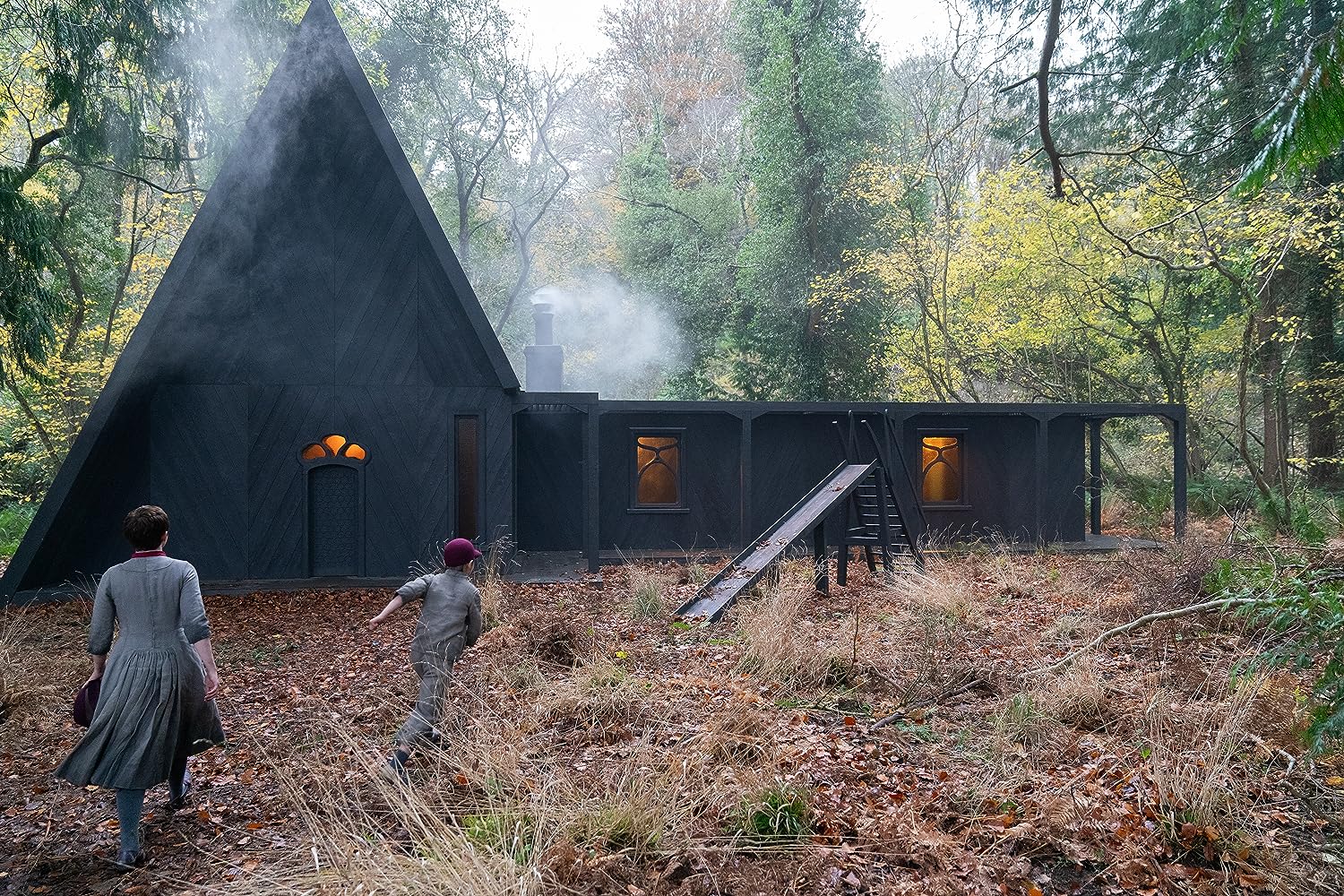 There’s a nice blend between the grim reality and horrific fantasy here. Too bad I won’t remember a lot of it. In fact, as I write this review, I can only back track to what could be a very select few highlights of the film in terms of what I liked. Not the best of results if you ask me.

I will say though, when it comes to casting Gretel and Hansel for this film, I do think the department did a fine job when it comes to finding people who look the part and happen to provide fantastic chemistry. At this point, for an interpretation like 2020’s “Gretel & Hansel,” I almost cannot imagine anybody else filling in the shoes of these characters. They feel like two kids who try to work off each other despite having some differences. Given what time frame this movie takes place in and what this film in general has to offer, this feels like a legit brother and sister duo. Thumbs up to Claire Curry and Julie Harkin for their swell job on casting. In addition to that, thumbs up to both Sophia Lillis and Samuel Leakey for giving it their all in regards to their performances of their individual characters.

I don’t know what it really is about this movie… Why does it get a below average vibe from me? The production value is excellent and everyone involved does a top notch job. But the directing and screenplay doesn’t really seem to be that well executed when translated to screen. I can almost imagine the pitchroom meeting.

“We’re going to reinvent the German folktale for a new age! We do not need a lot of money to do it. The audience will take in the beauty and wonder of what will be a depressing world in which to live. It’s gonna be great.”

I like immersion and great production as much as the next guy. But if you have seen me review movies a lot over the past year or so, one of the big things I bring up is pacing. If you have a good movie, but it isn’t well paced. You’re not always gonna get a pass in that department. Did everything that happened in “Gretel & Hansel” need to happen? That’s a tough question to answer. Because guess what? This movie is ONLY EIGHTY-SEVEN MINUTES LONG! By today’s standards for feature films, that’s pretty freaking short! This is the Napoleon Bonaparte of feature films! If “Gretel & Hansel” cut out a lot of what made it slowly paced, I almost wonder if it would just perhaps barely be feature-length by technical standards. According to the Academy it would probably be a feature because by their standards, features are over forty minutes long. Same goes for the AFI (American Film Institute). But you might not get a pass from the Screen Actors’ Guild, which considers features to be seventy-five minutes at minimum. I wonder… Does that include credits? Just curious.

In the end, “Gretel & Hansel” is making me sleepy-eyed just thinking about it. Seriously, as I type this, my face is tilting towards my shoulder. I do not think I will be watching this film again anytime soon, despite the excellent production factors put into it. I enjoyed “Gretel & Hansel” as something to look at for an hour and a half, and compared to other movies that I will not watch again, I did not exactly want to rip my face off afterwards. However, that is not enough for this borefest to qualify as a quality movie. I’m going to give “Gretel & Hansel” a 4/10.

This year, man. This year. Although this film came out in January so this is somewhat normal. In other news… Disney is getting greedier than Mr. Krabs by making “Mulan” a Disney+ exclusive that you have to pay $29.99 TO WATCH ON TOP OF YOUR MONTHLY SUBSCRIPTION. I’ll pass! I’m already paying for Prime Video, HBO Max, and I just got Peacock the other day! I am not that much of a streamer, and I don’t need more! By the way, my YEARLY PRICE for Peacock is the exact price you have to pay for “Mulan” on Disney+. Buh-bye for now!

Thanks for reading this review! My next review is going to be for “Capone,” starring Tom Hardy. I just bought the Blu-ray a couple weeks ago, and I popped it just this past week to gather some thoughts on it. Stay tuned for that review and other great content from Scene Before! Follow the blog through a WordPress account or an email to see the latest goings on! OR, if you want bonus content, like the official Facebook page! I want to know, did you see “Gretel & Hansel?” What did you think about it? Or, what is your preferred adaptation of the “Hansel & Gretel” material? Are you an oldtimer who doesn’t want anyone on their lawn? Say the original material for all I care. Either way, there’s a good chance I have not checked out any of your answers so any thought I give to it may be invalid. Scene Before is your click to the flicks!