“Ford v Ferrari” is directed by James Mangold (Walk the Line, Logan) and stars Matt Damon (The Martian, Good Will Hunting) as a car designer and Christian Bale (Batman Begins, Vice) as a driver. This film takes place in the 1960s, during a time where Ford Motor Co. was seemingly in a bit of a sticky situation. To get out of it, it is proposed that the company tries to develop a car that could win Le Mans, the 24 hour racing competition in France. Throughout, we get interactions between the two leads as they try to complete the ambitious project handed to them.

“Ford v Ferrari” is one of those movies that just sounds like it would be worth seeing just from hearing what it’s about. The film is based on a true story from over fifty years ago and describes Ford’s efforts to rise to superiority in a realm they don’t traditionally associate with. Plus, racing on the big screen always packs a punch. Now let me tell you about my history of going to the cinema.

The first movie I have seen in a theater is Pixar’s “Cars,” the film where a rookie racecar tries to win a big event and make history, ends up in a three way tie, eventually gets stuck in a town in the middle of nowhere, and must adapt to the current situation and deal with whatever consequences get in his way. I remember when I first watched “Cars” in the theater, one of the things that stood out to me the most that day was the sound. Let’s face it, racing movies are always better in the theater. Not that I have anything against watching them at home, but to hear cars blaze at hundreds of miles per hour through an advanced audio system is orgasmic to say the least. Such a notion can also be applied to “Ford v Ferrari,” whether it was intentional or not. I saw this film at my local IMAX Laser cinema at Jordan’s Furniture, where the sound is perhaps better than any theater I have been to. Although Dolby Cinema at AMC comes pretty close. If “Ford v Ferrari” does not at least get consideration in the sound categories during awards season, then the voters must be smoking something. That’s the only conclusion I can come up with at this point. 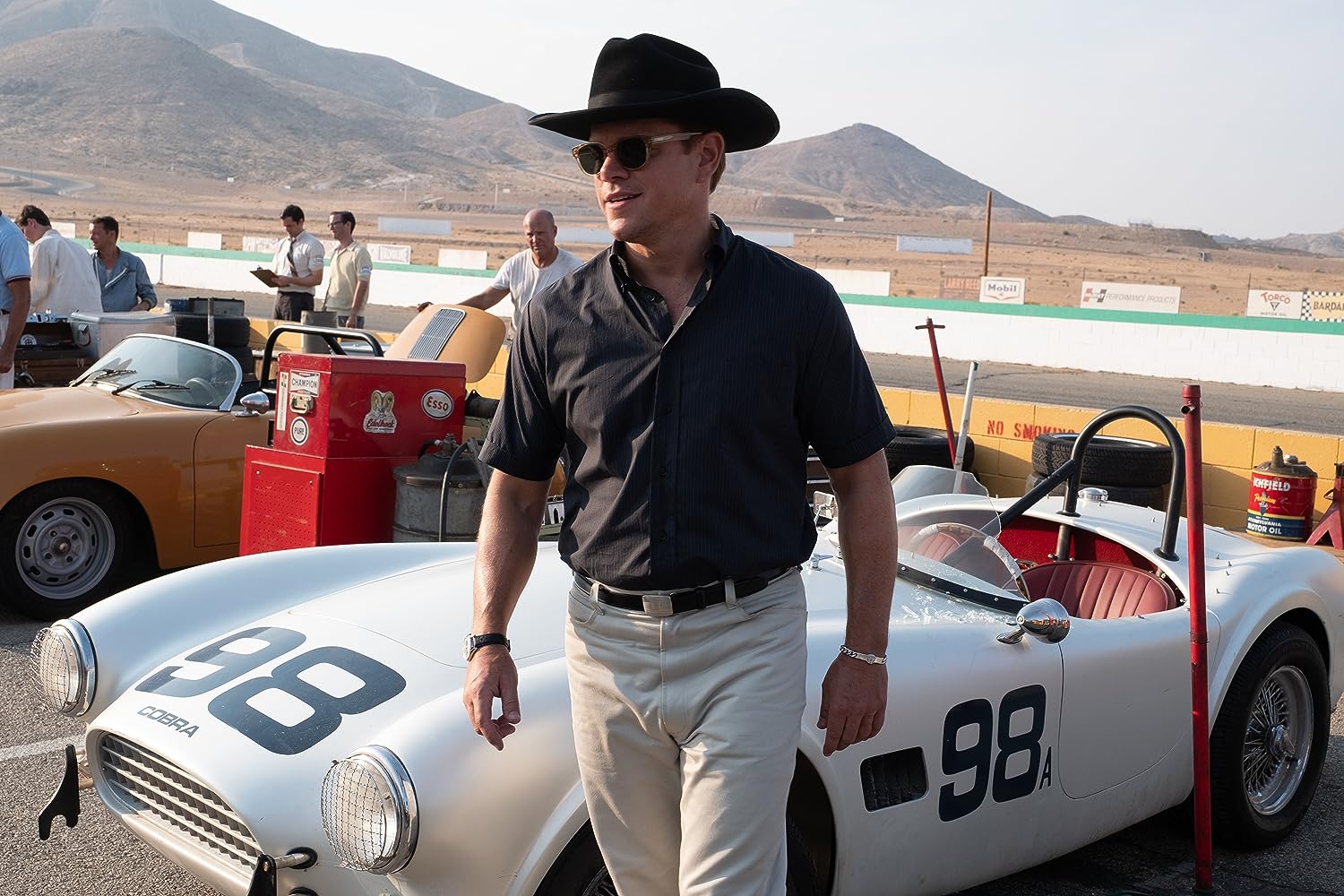 Speaking of praise, I have to say the performances in this movie, pretty much all over, are worth saluting. Matt Damon plays car designer Carroll Shelby, who has this swagger to him that kind of makes you like him even before he speaks. Maybe it’s because Matt Damon is, well… Matt Damon. The guy in general just manages to have this charm to him that makes him so damn admirable. Maybe it’s because I’m a Bostonian, I dunno. But Damon plays a character that fits directly within the specific time period. He feels like a guy I would want to have lunch with, kind of like Cliff Booth from “Once Upon a Time in Hollywood” or Joel Goodsen from “Risky Business.”

Christian Bale, if you ask me, personally does a better acting job in this film than Damon. And part of it honestly has to do with his physique. Because for starters, Bale lost weight for this film. While Matt Damon is definitely giving a solid portrayal of his characters, looks sometimes matter. Bale’s last role was Dick Cheney, and to hear Bale trimmed himself down for this already gives me a proper first impression. I also really enjoyed seeing his character’s arch as well. One of the main ideas behind Bale’s character is that he does not represent the idea of a team player. Without going into much detail, such an idea made the movie eventually feel charming and to my surprise, heartwarming.

But if you ask me, neither of the main two actors in this film hold a candle to the performance given by Tracy Letts (Lady Bird, Divorce) who plays Henry Ford II. From the first scene he’s in, I automatically got the sense of who his character truly is, a no nonsense type of boss that will do anything to make sure s*it gets done. Pretty much every moment of his presence was pure joy. There is a scene that takes place where he is discussing what Ford can do to have a place in society, you know that part of the trailer where Carroll is told to “go to war?” Yeah, that one. I imagine that directing had a lot to do with how delivery of his dialogue came out, but seeing Henry Ford II attached to his chair, almost as if his wife happened to be present and he was giving her the silent treatment, was gritty as hell.

I will also say that this film does one thing very well, and I already talked about how immersive the sound is, and that is definitely a win for this film. However, that is not the only way this film ultimately immersed me. As mentioned, “Ford v Ferrari” took place in the 1960s, based on my experience of watching this film, I felt like I was a part of that environment. It almost felt like everyone was into cars, and in a way that is sort of a representation of our history, specifically in the United States. Plus, the fashion styles popped for me, seeing various environments happened to be pleasant, and it almost made me want to be a part of this time period. Because, you know, there is no reality like fantasy. Only… this was reality over fifty years ago.

Now I know that I’m probably raving about this movie right now, and it is definitely worth seeing in the theater, but I gotta be honest, if there is one thing that I think could be a bit of a turnoff for me personally, it’s the product placement. I get it, some people gotta eat. I understand the purpose of product placement, and bits of it, kind of work. But there are various moments in the film where it gets annoying. I remember one shot just pans over to some advertisement on a building. It feels rather tacked on if you asked me. It’s NOWHERE near as bad as “Uncle Drew,” but that movie was partially responsible because of Pepsi, so there you go.

Speaking of complaints, I’ll have you know that I happened to be at this movie with my mom. She went to the restroom afterwards, and I was waiting outside for a short time. While she was in there, she just overheard somebody else going “That ending sucked.” My mother and I pretty much agreed that such an opinion is perhaps surprising. Partially because, based on recent research, the ending I’m referring to actually happened and is not completely inaccurate. I do want to know if there is something I am missing here, because I thought the ending was awesome. If anybody here did not like the ending to “Ford v Ferrari,” please leave a comment as to why you don’t like it. I seriously want to know. Maybe you’ll bring a new perspective to the table that could change my ways, or maybe I’ll never want to hang out with you. We’ll have to see.

In the end, “Ford v Ferrari” is a fast-paced, epic thrill ride to the finish. The characters are a mix of fun, charming, and gritty. The theatrical experience of going to see this movie is one you don’t want to miss. Yes, “Star Wars” is coming, but if you want a cinema experience that packs a punch and dials the immersion levels up to a 10, “Ford v Ferrari” is for you. I do think the product placement, while it definitely sometimes fits in and makes sense, is on the brink of being forced. Nevertheless, “Ford v Ferrari” is a delight of a movie and should get some attention during the awards season. I do not think it will win Best Picture at the Academy Awards, but do not be surprised if it at least gets nominated. I’m going to give “Ford v Ferrari” a 9/10. Thanks for reading this review! Just this past week, I saw two more movies, specifically “Knives Out” and “Dark Waters.” We are in a fine time to go to the movies, folks! Stay tuned for these reviews, and more great content by following Scene Before either with an email or WordPress account! Also, check out my Facebook page!

I also have one more announcement to make. This week I’m planning on dropping my possible final trailer for the Top Movies of the 2010s countdowns I’m planning on doing. That’s countdowns, with an s. I’m going to be doing a best list, followed by a worst list the day after. I already started working on them, and here’s hoping that the end of 2019 will not change that list significantly because I’m working really hard on them. The trailer should drop by the 30th of November, but if you want to know my ideal motives, I’m planning on either releasing it on the 28th, which is Thanksgiving, because then your family can talk about something less controversial than politics, or on Black Friday, the 29th, that way you can watch something to relieve yourself of the crowds at the mall. Also, with that in mind, stay tuned for my Top Movies of the 2010s countdowns, coming this January.

I want to know, did you see “Ford v Ferrari?” What did you think about it? Or, what is your favorite racing movie? Let me know down below! Scene Before is your click to the flicks!