“The Kid Who Would Be King” is directed by Joe Cornish (Attack the Block, The Adam & Joe Show) and stars… some kids you may have never heard of. Patrick Stewart’s here though. Anyway, in all seriousness, this movie stars Louis Ashborne Serkis (Alice Through the Looking Glass, Mowgli: Legend of the Jungle), Rebecca Ferguson (Mission: Impossible: Rogue Nation, The Girl on the Train), Tom Taylor (The Dark Tower, Legends), and as mentioned, Patrick Stewart (Star Trek: The Next Generation, American Dad!). This film revolves around a young boy named Alex, who eventually finds Excalibur, the sword of King Arthur. Alex eventually comes to a realization that he must use this sword to stop the enchantress Morgana from destroying the world.

I didn’t see “The Kid Who Would Be King” when it came out in theaters. Partially because on its opening weekend, I wanted to go see “Serenity” instead, which was kind of a mistake. I remember seeing the trailer not too long before the film came out and it looked like a fun adventure film for a family demographic. I can dig a solid adventure flick. But unfortunately, due to life, college, and other movies getting in the way, I missed out on this film during it’s theatrical run. And apparently a lot of other people did too. This movie is a box office bomb and made over $30 million, which is fine for an R-rated, small-budget horror film. But having seen “The Kid Who Would Be King,” there are a few effects-heavy sequences that give that traditional fantasy film vibe. According to IMDb, the film’s production budget is estimated to be $60 million. I just bought this movie on 4K recently and I decided to watch it on Thursday night. As I was watching the movie, I didn’t know how to feel. In fact, now that the movie is no longer playing on my screen, there is a massive part of me that still doesn’t know how to feel. But for the sake of not spoiling anything, I cannot go into everything that happened.

This movie is not exactly what I would call a guilty pleasure. Who knows? Maybe it will become one overtime depending on how much attention it picks up in terms of our cultural trends. Maybe the “The Simpsons” could make an episode based on it that would make people go back and watch the movie. I don’t know, I can’t tell the future. But this movie has a collection of decent sequences and scenes, some interesting characters, and cool ideas (some of which MIGHT be better remaining on paper), but it occasionally gets bogged down by one or two heavy plot points. In fact, without spoiling anything, there’s something that really ticked me off about the mother, and it honestly made her one of my most hated characters, probably in movie history. Don’t get me wrong, she’s cast pretty well, and she definitely fits the role’s requirements, but the way she’s written was pretty anger-inducing. Part of me wonders if that’s the intention, but regardless of whether this intentional or not, I still got a bit irritated, which is not good. Without giving away my final verdict just yet, but there were a couple of fluctuations of said verdict. It’s kind of like ordering the same meal at a fast food restaurant repeatedly. Chances are you are not going to be completely satisfied as you may have been at a certain time because it doesn’t always come out the same way.

But one of the biggest perks I can give towards this film may as well go towards the acting, because if one were to pitch to me an idea of a movie with a ton of kids in the cast, I’d probably hesitate on getting it greenlit because there’s that stereotype of child actors being difficult to work with. So I not only have to give props to the kid cast but also the work that director Joe Cornish had to take on. There were barely any moments that any of these child actors felt out of characters except for one. There is one kid who goes by the name of Lance (Tom Taylor) who starts out the movie as a bully, then he befriends the main character, which felt a tad rushed for him, but that’s not why he felt out of character for me. That befriending moment was sort of convenient but it was not my main problem. My main problem kind of occurs during the midway point of the movie.

One of my minor problems in this movie as well has to do with chemistry. The chemistry manages to improve by a tad as soon as the movie comes to a close. But the main problem with the chemistry between our four leads manages to carry through from the first act and extends for a good portion of the movie. The characters almost feel like they’re randomly placed together. Granted, one advantage is that the four leads originally were in duos, and these duos cross over. So these characters, as duos, have chemistry, which to me, works. And this was all previously established before the movie’s main course began.

Another minor problem of mine is that this reminded me a lot of another movie that was trying to go for a similar demographic last year, specifically “A Wrinkle In Time.” I say so because you see the main character at his school, trying to prevent something happening because to him, it’s what he thinks is right. And much like that movie, we eventually meet a weird being that can’t fit into normal, 21st century society. I will say however, unlike the mediocre combination of the odd trio in “A Wrinkle In Time,” this film did a better job with its solo being. 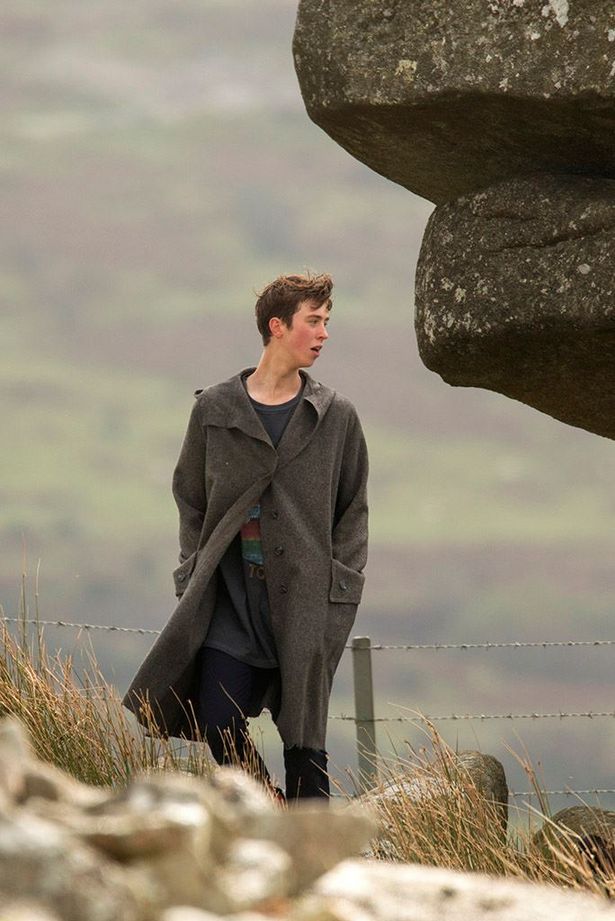 That weird being by the way is Merlin himself, who goes by two identities. Although, without diving into much detail, Merlin may have disguised himself well from the outside, but his fake name, which is exposed during the movie was ridiculous. Why? Because it sounds almost exactly the same as his original name. It would be like if I were trying make a fake ID or something and change my name to have my last name come before my first name! I might as well settle for some fake mustache I can buy at Walmart or something. I mean, I don’t know about Medieval Times as much as other people. However, I would probably assume that Merlin wasn’t the first definition people thought of that would relate to the word “idiot.” Then again, that is his only trace of idiocy throughout the entire film, so he could definitely be worse as a character. Plus another odd thing about this Merlin is that while he is often stereotyped as an old man (which is where Patrick Stewart comes in), he is represented as a young man who looks like he often jams out to rock music (which is where Angus Imrie comes in). The reason? He mentions he can age backwards. I have a question. Can he turn into a baby? I honestly don’t want to see him turn into a baby, but that is a question I continue to have.

As for how this movie concludes, I will admit that this film feels like it goes on for a bit too long. It could have ended at a certain point, but it almost feels like because this movie “needed some big climax,” it just had to continue. Granted, the climax was pretty cool at times, but it almost feels forced or tacked on. And it does partially involve a couple major plot points exposed throughout the film, but I didn’t care about some of those plot points so why should I fully care that we’re getting a flashy climax? In fact, without it, the movie probably could have made its budget back. They would have spent less on it and theaters could have added more showtimes. Although at the same time the movie could end up feeling rushed, so who knows?

In the end, I almost feel confused on my ultimate thoughts towards “The Kid Who Would Be King.” It’s not horrible, yet I am pointing out a lot of flaws. It’s not great, but I am willing to say there are many positives brought to the table. There were even a couple of shots I really liked in this movie. There’s a landscape shot that shows our main characters walking through a field, it’s eye candy on my 4K TV if you ask me. There are a few creative ideas brought to the table, especially with a movie like this that kind of has a predictable formula. But there are some parts of the movie that truly got me angry. Even with that, it’s met with fun action, a likable duo between the main character of Alex and Bedders. Although if I were to have kids one day and sit them down for a family movie night, this would not be my first choice. I’m going to give “The Kid Who Would Be King” a 6/10. Honestly, this movie could also be a 5/10, but I’m not going to give it that. Because this film still manages to be fun while making me slightly irritated. That’s just me. Thanks for reading this review! Pretty soon I’m going to have my thoughts on “Godzilla: King of the Monsters.” Be sure to look forward to that review very soon. But I will point out something to you all. You may or may not know this, this is my 299th standing post. My next entry to Scene Before is going to be a special 300th post giving you guys an update on my Blu-ray collection! I’ll posting that as soon as possible so look forward to it! Be sure to follow Scene Before with an email or WordPress account so you can stay tuned for more great content! I want to know, did you see “The Kid Who Would Be King?” What did you think about it? Or, what is your favorite movie involving Medieval Times? Let me know down below! Scene Before is your click to the flicks!