“The 15:17 to Paris,” unfortunately, is directed by Clint Eastwood (American Sniper, A Fistful of Dollars) (sigh). This movie stars Alek Skarlatos, Anthony Sadler, and Spencer Stone as themselves. The film is based on a book known as “The 15:17 to Paris: The True Story of a Terrorist, a Train, and Three American Soldiers,” which is based on a true story of three Americans who grew up together and find themselves discovering a terrorist plot while they’re aboard a train in France.

Now you may be wondering why you just read the word “sigh” in this post. Clint Eastwood is a beloved figure in Hollywood. I can’t say I’ve seen much of his work, but the man has proven himself to be talented as a director, as an actor, and as a producer. And in “The 15:17 to Paris,” the man comes off more like some American-loving guy than a filmmaker. I’m not trying to say that I hate America, I’m not trying to say that Eastwood can’t love America, but I’m saying that this film about three Americans who obviously were courageous, needs improvement.

This film is an hour and thirty-four minutes long, which is actually just a couple minutes shorter than “Sully,” another film directed by Clint Eastwood which is based on a true story. “Sully,” much like this movie, wasn’t as good as it would have, could have, and should have been. Although it was barely passable unlike this one. What worked in “Sully” is that the film is centered around the event people now refer to as the Miracle on the Hudson and the entire film focused on it in some way. The main event that really should be the nucleus of the movie this review is directed toward, which is the train fight, doesn’t feel like a major part of the picture. One of the other differences between this and “Sully” is that “Sully” has actors playing the lead roles and this movie doesn’t. I will be fair in saying that the three guys also written a book on this information, which eventually lead to this movie. The book even has mostly five-star ratings on Amazon. Although they had no involvement in the screenplay. Maybe if they wrote the screenplay and gave their own insight, maybe the movie will be better. Although that’s hard to say too because these guys are not professional screenwriters. This movie honestly becomes more and more of an enigma the more I think about it.

As mentioned, “Sully” mainly focused on an event that the lead character had major involvement in. This movie doesn’t. Not only that, but I didn’t even care about most of what happened in this film at all. The film starts off telling about how long the three major characters have been friends. They were troublemakers, they went to a Christian school, they didn’t have girlfriends, they enjoyed taking out some guns and playing War. That was somewhat intriguing. Then they all get older, the movie’s starting to lose some steam, but it’s still competent, and then we get to Europe and I ask myself, “What is happening?” This movie made me ask the same question I asked myself as I was forced to read “Pride and Prejudice” in school! Nothing happened! I will give the movie credit, at least it was technically more entertaining to me than “Pride and Prejudice,” but keep in mind, I’m not some girl who lived in 19th century Britain. Although this is a film DIRECTED BY CLINT EASTWOOD! I expect greatness from a movie like this! Once again, competently shot and entertaining in ways, BUT NOTHING EVEN HAPPENED!

I will also be fair and mention the hour and a half runtime again. Even if Clint Eastwood didn’t direct “The 15:17 to Paris” and it instead happened to be directed by Michael Bay, I’d probably have somewhat similar thoughts on both final products. Also, for the record, Eastwood didn’t do the screenplay. I’d have similar thoughts on both products because they’d still be barely long enough to qualify as a feature length film. Down below I have a description regarding feature length films taken from Wikipedia.

“According to the Academy of Motion Picture Arts and Sciences, the American Film Institute, and the British Film Institute, a feature film runs for at least 40 minutes, while the Screen Actors Guild states that it is 80 minutes or longer.

The majority of feature films are between 70 and 210 minutes long.”

I have never really watched too many films that are forty minutes long, but this a film that could easily be a lot shorter, although in the end, a number of viewers who went to see this film would probably skip on it because it’s too short to be a “movie.” Heck, I think a large number of theaters wouldn’t even accept the film if it were forty minutes! Although it has Clint Eastwood’s name on it so…

In my reviews it’s traditional that I provide a section I where I go into the major characters and some characters that perhaps stood out to me, but I’m not gonna do that here. Instead, I’m gonna introduce each character, and I’ll provide some actors that could potentially play the role these folks have played themselves.

Here are the three heroes from this movie. The first one we’re going to “talk about” is Alek Skarlatos (left). This guy could have been played by a number of people in my book. The first person that comes to mind is Matt Damon. They look somewhat similar physically, granted Damon’s twenty-two years older than Skarlatos, but I think a role like this can be pulled off. Another person I bet could pull this role off is Alden Enrenheich, and if this name doesn’t sound familiar to you, let me have you know he’s been in films such as “Beautiful Creatures,” “Blue Jasmine,” and “Hail, Caesar!.” He’s also going to be playing Han Solo in “Solo: A Star Wars Story,” which at this point is more like “A Star Wars Product” given material I’ve seen thus far. Another possible candidate to me is gonna be somewhat surprising and that is New England Patriots’ tight end Rob Gronkowski. I know, weird, right? I will say though that he, just like some other notable sports stars such as Dave Bautista (Blade Runner 2049, Guardians of the Galaxy), Dwayne Johnson (Central Intelligence, Jumanji: Welcome to the Jungle), and John Cena (Daddy’s Home 2, Trainwreck) had some acting gigs and it’s now a regular thing for them. Although I wonder if this kind of thing would have worked out because this movie went into production over the summer and certain announcements concerning it came in around preseason time. Also since I just mentioned John Cena, he probably would have done fine as this character given his physique.

Onto the guy in the middle, Anthony Sadler, his character is a–wait a minute, I don’t want to lose my sense of focus… The guy could have been played by Chadwick Boseman, who is playing Black Panther in, well, “Black Panther.” Sadler could have been played by Winston Duke, who will be playing M’Baku, another character in “Black Panther.” He could have also been played by John Boyega, who you may know as Finn in the “Star Wars” sequel trilogy. Yes, he’s British and this is an American character, but if you have seen John Boyega, he can do one hell of an American accent. Maybe Eastwood could have gotten J. Lee, who you may know for playing John LaMarr in Seth MacFarlane’s “The Orville.” Maybe Lakeith Stanfield would be a good pick. He was in movies such as “Selma” and “Get Out.” I can’t say I’ve seen much of his work, but he has proper looks for the role.

Moving onto Spencer Stone, he is the guy on the right of the photo which is located a couple paragraphs above where you are now. I’m not saying that this guy should play Spencer, but given one thing that happens in this movie, I wouldn’t mind seeing Russel Crowe taking on the role. I say this because there’s a meme-worthy “Gladiator” reference in this film. Remember how I said Rob Gronkowski would be a good pick for Skarlatos? If he had a buzz haircut, then he would probably be suitable for this role as well. Channing Tatum might be a good pick if he ever does a buzz to his hair too. Perhaps if Andrew Garfield did some shaving too his placement in this role could have been rather effective.

This movie is not exactly the end of the world, but it is lacking professionalism. Yes, you have a very experienced director helming it all, but you have a multiple actors who are playing themselves. Sure, this movie has its fair share of big names such as Judy Greer and Jenna Fischer, but this also has a screenwriter that hasn’t really done much of anything. Sure, experience doesn’t always equal skill, although it doesn’t change the fact that the level of skill put into this film wasn’t completely visible. Maybe the main trio wanted to play themselves for authenticity, but you have to consider, how skilled are they? They weren’t terrible in this movie, but their acting ability happened to be at a low level of some sort.

Some of you might be thinking, “Hey! Jackass! You’re forgetting about such instances like when Kumail Nanjiani played himself in ‘The Big Sick!'”

I didn’t. You’re missing the point.

You see, Kumail’s a f*cking actor. 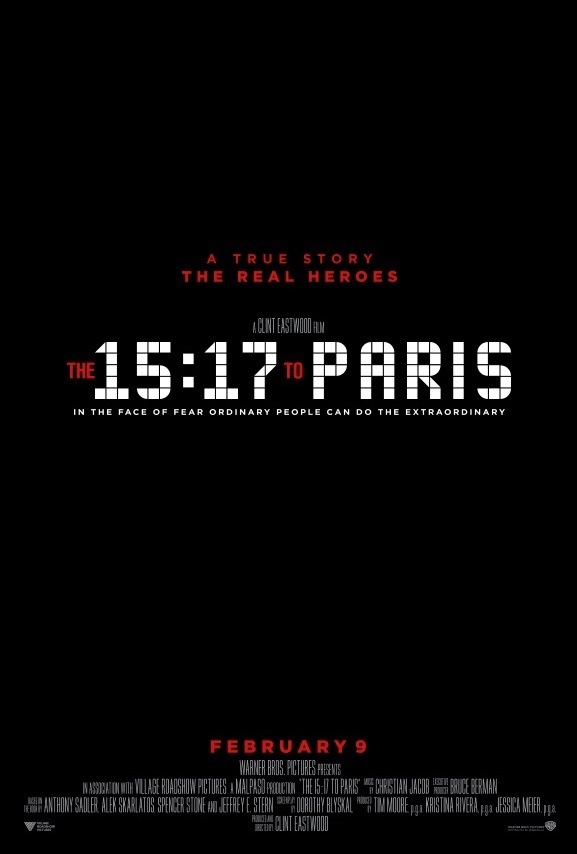 In the end, this movie happened to be underwhelming as s*iiiiiit. If this movie lacked a tad more professionalism than what was already there, I might be a little more understanding and give a higher verdict, but this movie just got worse the more I thought about it. It’s difficult to care about the heroes, the filler is all over the place, and pretty much the only positives include the well directed action and the proper cinematography. Clint Eastwood, I’m sorry, I didn’t feel lucky, and this movie is a punk. A punk which stole my friend’s hard earned money! I’m going to give “The 15:17 to Paris” a 3/10. This is a hard movie to rate. I didn’t really know what to expect before going in since I haven’t really seen much in terms of marketing compared to some other films I know, but a movie with Clint Eastwood’s name attached to it should have been miles better than how this turned out to be. And sadly, this MIGHT POSSIBLY be the best movie, at least the best one that a number of people actually give a s*it about, to come out this weekend! What else is coming out this weekend you ask? The climactic (in more ways than you’d imagine) “Fifty Shades Freed,” and from Sony Pictures Animation, the absolute gods that brought you “The Emoji Movie,” live-action “Peter Rabbit!” Thanks for reading this review! Pretty soon “Black Panther” will be out in theaters, and given my ambitions, I have plans to see that as soon as possible. I’m also working on another post which will be out soon, which includes my personal thoughts on the upcoming “Super Mario Bros.” film. Stay tuned for more great content! I want to know, did you see “The 15:17 to Paris?” What did you think about it? Or, what is your least favorite Clint Eastwood film? He can do anything in it. He could act, he could direct, anything. Leave your comments below and maybe they might have more quality than “The 15:17 to Paris!” Scene Before is your click to the flicks!