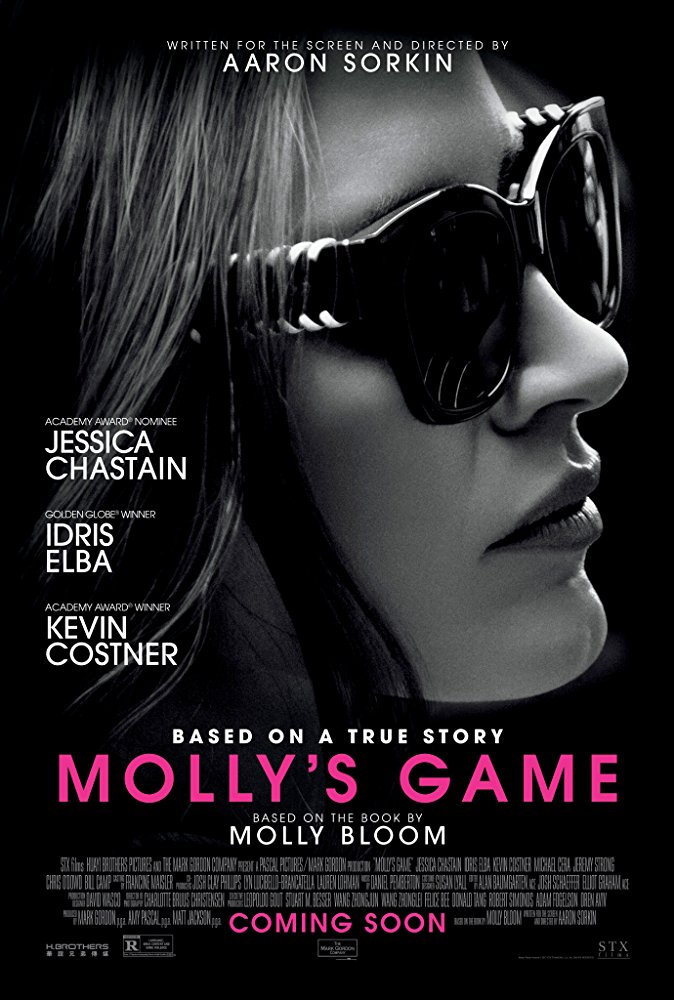 “Molly’s Game” is directed by Aaron Sorkin (Steve Jobs, The Social Network) and stars Jessica Chastain (Interstellar, Zero Dark Thirty), Idris Elba (Pacific Rim, Thor), and Kevin Costner (Man of Steel, Dances with Wolves) in a movie based on a book of the same name. It’s about the true story of Molly Bloom, a former poker entrepreneur and Olympic-class skier who was charged with running the world’s most exclusive high-stakes poker game.

I haven’t really followed much of Aaron Sorkin’s previous work. This movie is actually his directorial debut, and if you have followed Sorkin’s work, you’d know he’s typically known for his writing. Sorkin is responsible for creating “The West Wing,” which he often wrote. As far as movies go, he has written “Moneyball,” “Steve Jobs,” “The Social Network,” “A Few Good Men,” and “Charlie Wilson’s War.” I was actually going to watch “Steve Jobs” in 2015 during its theatrical run, but I never got around to it. Nevertheless, I heard the fellow can write. Having seen this movie, I’d say he can direct too. I can appreciate the vision this movie contained. Going at a quick pace, all the while providing a serious tone. There were a couple of moments that I really liked from a lighting perspective as well. The colors just meshed together almost like a very small lens flare that didn’t feel obnoxious in any sort of way. As far as writing and editing goes, here are my thoughts.

I totally see what people are talking about when it comes to Aaron Sorkin and writing, the two go together like FedEx and that arrow between the “E” and the “x.” What’s that? You didn’t know about the FedEx arrow? Google the FedEx logo and observe it closely. The opening sequence of this film has Molly Bloom talking like I’m listening to what happens when an auctioneer and a motivational speaker combine into a single person. Not only was the diction well done, it was funny, it was informative, and it set a proper tone for the movie. This movie’s based on a book, and I apologize to books, but I never read the book for this film. I don’t know how similar this movie’s introduction is to the book, but if the writing resembles the book here, I’d say this is great writing in general. Props to both Bloom and Sorkin if that’s the case. Still, at the very least, props to Sorkin. I’ve heard a saying that the best directors make the best editors. As far as directing ability goes, this was mostly competent. I have a couple of issues, but this can apply to either the script or the editing instead of just directing.

A couple of shows that really make me uncomfortable are “The Office” and “Modern Family.” I heard a lot of people like both programs. Personally, I can’t watch them. Maybe I’ll give “The Office” a try because I hear a lot of folks talking about it like it’s the greatest thing between Netflix and the idea of Netflix and chill. Also, f*ck Netflix. However I don’t think I can watch “Modern Family” ever again. It’s not only unfunny despite how many people watch it and revered it is, but it’s also shot in a style that tries to make you feel like you’re there, but it just comes off like a student film to me. It almost reminds me of the shaky cam from “The Hunger Games!” “Molly’s Game” is not as bad, it’s not as shaky, it’s not as handheld, it works for what it’s doing. …For the most part. When it comes to editing, this movie cuts way too quickly sometimes. It tries to maintain this very quick style of filmmaking, and it just doesn’t work. I noticed one or two jumpcuts here as well. As far as writing goes, it’s tonally inconsistent. While most of the movie is fast and stays fast, it sometimes just slows down to a point where it’s horribly slow. Throughout the entire film, Jessica Chastain is narrating as Molly Bloom and it almost feels like something that should keep you going towards the edge of your seat. There are moments here that just don’t match what the movie feels like the entire time. It feels like a couple movies meshed into one. It’s like combining one movie, “The Grand Budapest Hotel,” with another movie, “Manchester by the Sea,” although it’s a million times happier. The editing combined with the screenplay is like a hotel room with a comfortable bed, no bugs, it’s got a clean carpet, the TV is 4K, everything looks nice, but the toilet isn’t working, the shower’s water system is screwed up, and the sink handles for hot and cold are grungy and hard to operate. It just all needs minor tweaking on perhaps major flaws before absolute perfection.

However let’s move our attention to the best part of the movie, Jessica Chastain as Molly Bloom. Some people may go see this movie for a number of reasons. Some people are interested in the story of Molly Bloom, some people like Aaron Sorkin’s writing, and some will say that the cast looks promising. I’ve observed Idris Elba and Kevin Costner in this film, and while both give competent performances, Jessica Chastain trumped them both. If the writing wasn’t excellent enough, this movie had an amazing actress to go off of it. I must say, despite my love for Jessica Chastain, I haven’t seen too many performances from her. However, much like the other movies where I saw Jessica Chastain performing, this is another fine example of how someone should act in a movie. They transform into a different person, and they allow the audience to see them as more than someone on a screen.

In the end, I got to say that “Molly’s Game” is not really a movie that I’d recommend to everyone, but I wouldn’t say to shy away from it either. It’s one of those movies that can impress you in a number of ways, but isn’t entirely screwed together to the point of perfection. I like the acting. I like the directing. I like the writing. However, the movie itself is sloppy when it comes to pacing. At times it wants to accelerate, and at others it wants to drag. There are times where I just nearly wanted to fall asleep, and I must have felt that during the fast parts due to the inconsistency of pacing. Although I will say this, Jessica Chastain f*cking rocks. I’m going to give “Molly’s Game” a 6/10. Thanks for reading this review! On Thursday, I’m going to start off my “Maze Runner” review series by talking about the first installment in the movie franchise, “The Maze Runner,” so look forward to that. Also, depending on what happens, tomorrow I’m going to upload a surprise post. I won’t tell what it is. But January 17th is a special day in my heart. That’ll be your hint. I might not post this, but that’s if I don’t finish it in a certain amount of time. Stay tuned for more reviews and other great content! Did you see “Molly’s Game?” What are your thoughts? How do you think Aaron Sorkin did as a first-time director? Let me know down below! Scene Before is your click to the flicks!