Hey everyone, Jack Drees here! Before we dive into this post, I just want to let everyone know, sorry, I don’t have a review for you this weekend. Maybe next weekend I’ll see something, I do have a desire to see “Cars 3.” Some people might question me for it, but I don’t care, I grew up watching “Cars” and do enjoy Pixar’s work. Anyway, with that out of the way, let’s get into some unfortunate news.

Adam West, otherwise known as TV’s Batman, is dead. He died after a brief battle with Leukemia, and there’s a reason I’m doing a post on this. And no, it’s not about “Batman,” I actually, believe it or not, have not seen his version of “Batman.” However, this is on another show he has a role in, “Family Guy.” 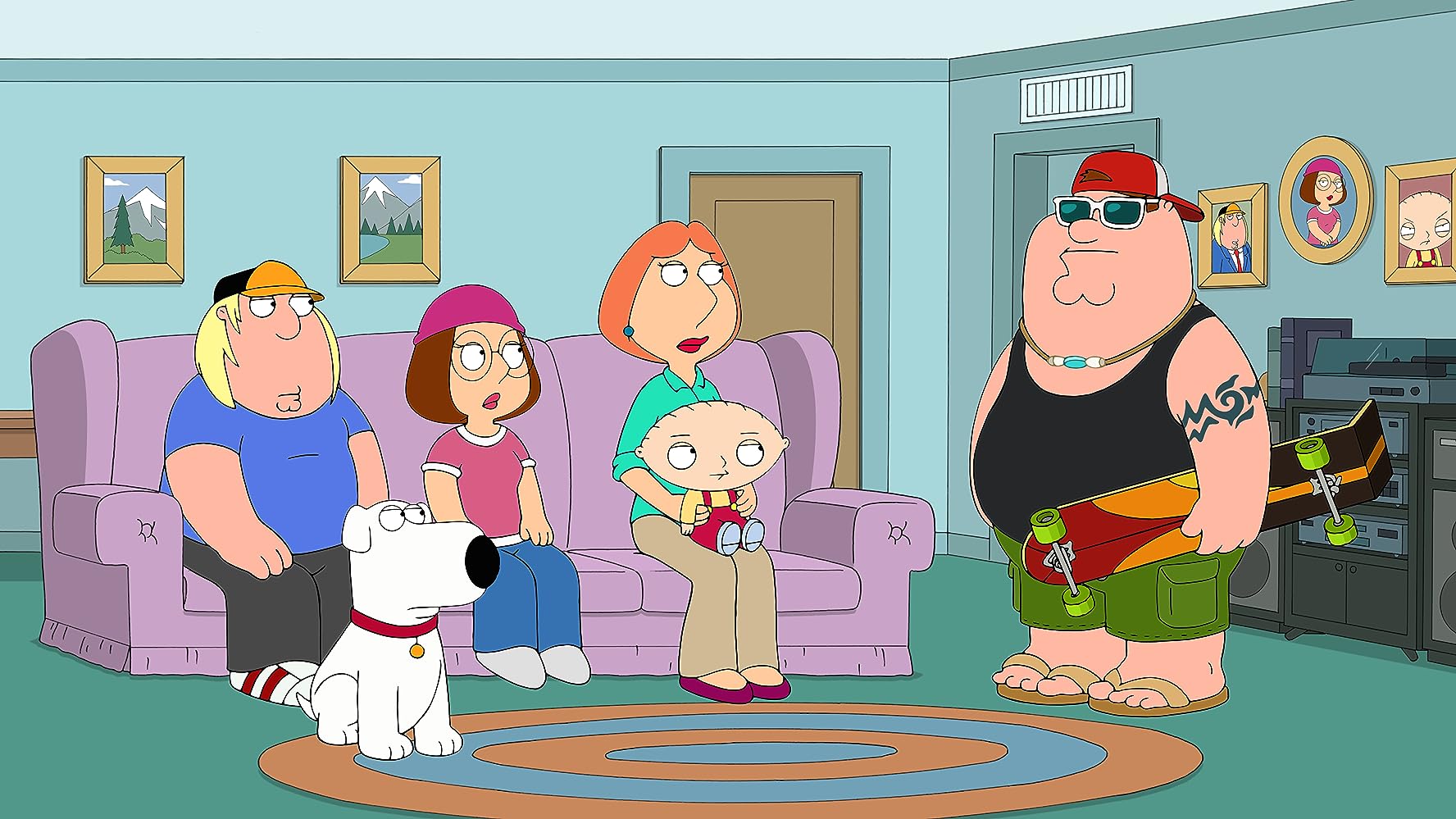 If you guys didn’t know, “Family Guy” might be my favorite show on the air right now. Its early seasons are comedy gold and while its later seasons have dwindled, I still find various episodes to be extremely funny. For those of you who don’t know what “Family Guy” is, it is a show that airs on FOX about a family called the Griffins. There’s the idiotic dad, Peter. The caring mom, Lois. The wise dog, Brian. The villainous smart baby boy, Stewie. The brainless teenage boy, Chris. …And Meg. Each episode of the show either focuses on the family’s everyday adventures. Some episodes even revolve around controversial topics including: The existence of transgenders, gay marriage, vaccinations, censorship on TV, and marijuana legalization. While doing that, they shove in references from various sources such as movies or TV shows: Some of my favorites include: “Ferris Bueller’s Day Off” in “Stu & Stewie’s Excellent Adventure,” “The Price Is Right” in “The Fat Guy Strangler,” “Blues Brothers” in “Road to Germany,” and all three “Star Wars” spoof episodes. Some episodes even have celebrities playing themselves in major roles. Some include: James Woods, Ryan Reynolds, Tom Brady, Rob Gronkowski, Rush Limbaugh, Liam Neeson, and Frank Sinatra Jr. 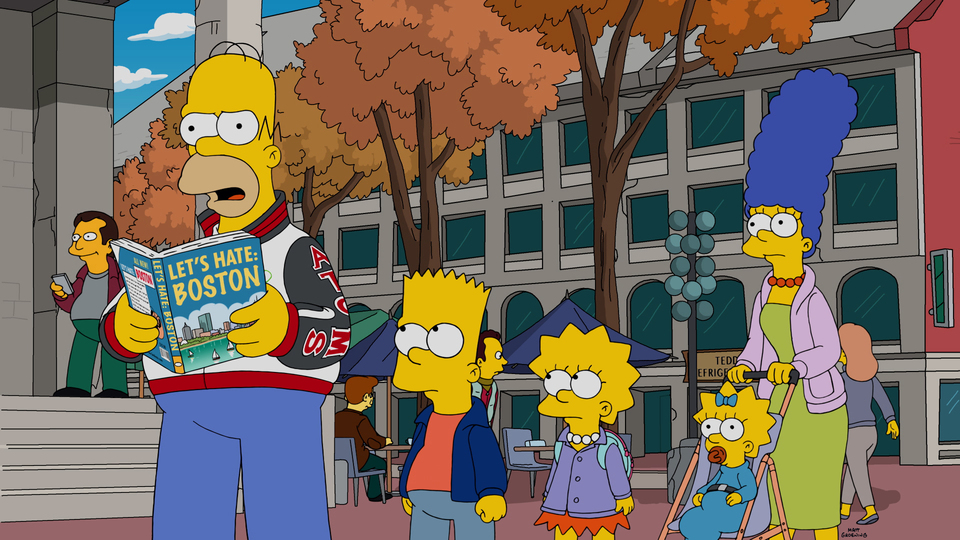 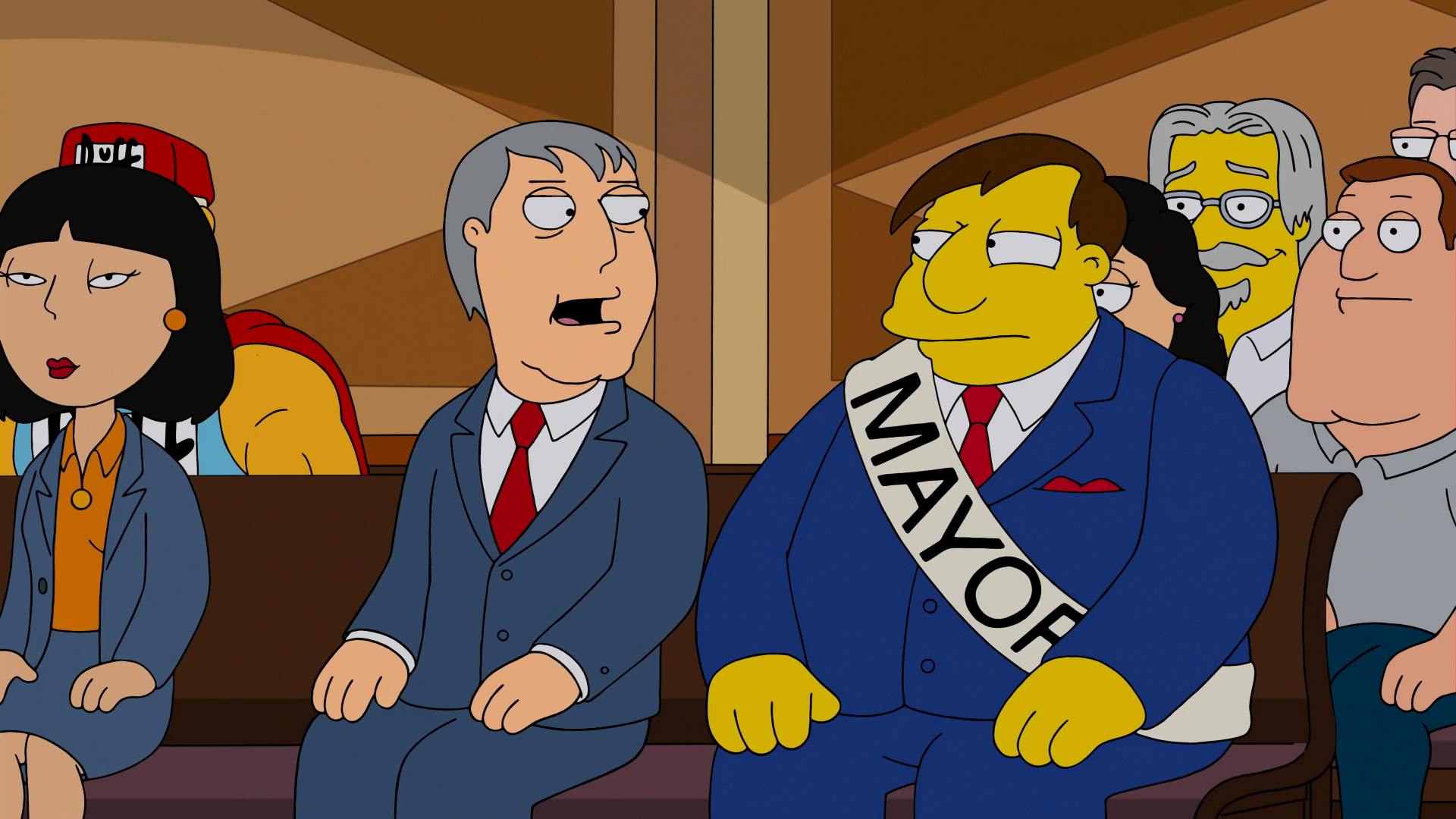 MAYOR WEST: Are you a mayor?

MAYOR QUIMBY: Yes, I am.

MAYOR WEST: Are you a “cool” mayor? (makes hand gesture to suggest smoking)

MAYOR QUIMBY: I uh… I like to think so.

The two leave the courtroom

As mentioned, this is more of a focus towards “Family Guy,” so the character we are going to be talking about, is Adam West’s character, himself. Although he’s often referred to as mayor West. Specifically, we’re gonna focus on what could be next for the show now that Adam West is no more. This is also because I want to bring an idea that I just came up with to the attention of FOX, Seth MacFarlane, everyone else who works on “Family Guy,” every single person who played the character of “Batman,” and maybe even some other Batman characters.

Batman may be arguably the world’s most admired superhero, if not, he’s probably the best without any actual superpowers. Adam West is one of the few people to have the great opportunity of playing him in either a film or TV show. Now that West is gone, I’m thinking that the show should find another guy to play the mayor of Quahog, which is the town the Griffins inhabit. My thoughts are that the next mayor of Quahog should be played by a guy who has once played Batman. Seriously! You could get a number of people for the role. You could get Michael Keaton, you could get Christian Bale, you could get Kevin Conroy, you could get Val Kilmer, even George Clooney! Come on! If you get George Clooney, he can probably even make fun of himself playing Batman because even HE knows his portrayal of Batman sucked balls. He has shown this multiple times. Here is a quote given by George Clooney at CinemaCon last year on the topic of “Batman v. Superman: Dawn of Justice” starring Ben Affleck as Batman: 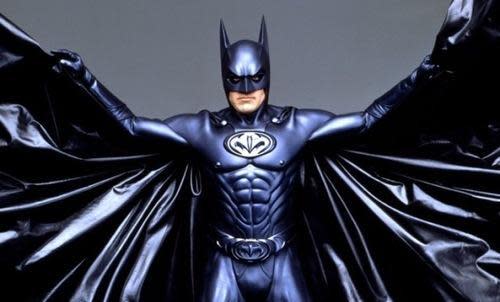 “Well I haven’t seen it, you know? Because I feel that Batman died with me. As you can imagine, don’t you guys feel the same way? Let me just point this out, I wore a rubber suit and giant rubber nipples, and I still have a career.”

Granted “Batman v. Superman” came out around the time Clooney said this, but he hates his interpretation of the caped crusader nonetheless.

One idea is that before the whole new mayor character thing comes to be, they should make one episode which has two characters running for mayor. One of the candidates, should be a character played by someone who has played Robin. So you may as well call this rivalry “Batman vs. Robin.” You can probably get Chris O’Donnell, Loren Lester, or Michael Cera. In fact, I have an another idea. Maybe this rivalry can be a Batman and Robin reunion. For example, you can put Val Kilmer as a character against one played by Chris O’Donnell considering they were both in “Batman Forever.” You can also put George Clooney against Chris O’Donnell considering Clooney replaced Kilmer during 1997’s “Batman & Robin.” You can also have a “Batman: The Animated Series” reunion and put Kevin Conroy and Loren Lester against each other. Or if you want to go with a more recent example, maybe put the LEGO Batman (Will Arnett) and LEGO Robin (Michael Cera) against each other.

Another idea that could be done is instead of Robin, they should have a character played by someone who played Catwoman, who in some versions of Batman material is a villain, while in others, is an antihero. For this character, they could cast Halle Barry, Anne Hathaway, or Michelle Pfeiffer. Also, remember how I mentioned a Batman and Robin reunion could be a solid idea? Maybe the same can be said for Catwoman. Maybe they can go with Michael Keaton as one character and Michelle Pfeiffer as the other. Another reunion could bring back the actors from the animated show, Kevin Conroy and Adrienne Barbeau. Or maybe the characters from Christopher Nolan’s Batman films could return, Christian Bale and Anne Hathaway. If Catwoman doesn’t work out, you can get another villain. Maybe Poison Ivy or Harley Quinn. If that doesn’t work out, maybe get another hero, such as Batgirl.

If you read the end of the most recent paragraph carefully, you may notice that there are all female characters mentioned. Why do I say that? I feel like an episode like this could be a parody of the 2016 US Presidential Election and there could a male character played by someone who played Batman representing Donald Trump, and a female character who plays a female in the realm of Batman representing Hillary Clinton. Maybe the whole episode doesn’t have to be making fun of it, maybe it’s just a portion. Perhaps you can have the two in a debate together and it happens to be reminiscent of one of the debates before Election Day. Maybe for the Donald Trump representation, his character could come up with something he plans to build that he’s gonna make either the citizens of Quahog or some out of towners pay for. Heck, he could even mention a country, or if he wants to go for a closer resemblance, he can make citizens of New Mexico or the people who work for Texaco Inc pay for whatever the Trump wannabe wants to build much like how Trump himself wants Mexico to pay for the wall he plans to build. Also, if you want to make fun of him even more, make him look orange the entire time, or you can have him be white and occasionally pour an orange drink on himself such as Fanta or orange juice. Also, for the Hillary Clinton type character, you could have people complaining about something about her in the same way people complain about Hillary’s emails. You can also have this character represented as rather unhealthy in at least a clip or two, and I even have a great backstory. Quahog, RI never once had a female mayor, much like how the US never once had a female president. Since this female is running, women everywhere in the town, especially feminists, become ecstatic by this. They would do ANYTHING to make this person the mayor of Quahog just because this person is a woman. Come on, I’m writing your show for you! One more small thing I’ll bring in for Donald Trump is that if you can’t bring in someone who played Batman, bring in someone who played the Joker such as Mark Hamill or Zach Galifianakis or Jared Leto. After all, when people were aware of Donald Trump’s announcement about running for president, or him simply campaigning for the position, or him getting elected, or him being sworn into office, some of them probably thought something like this was a giant joke. 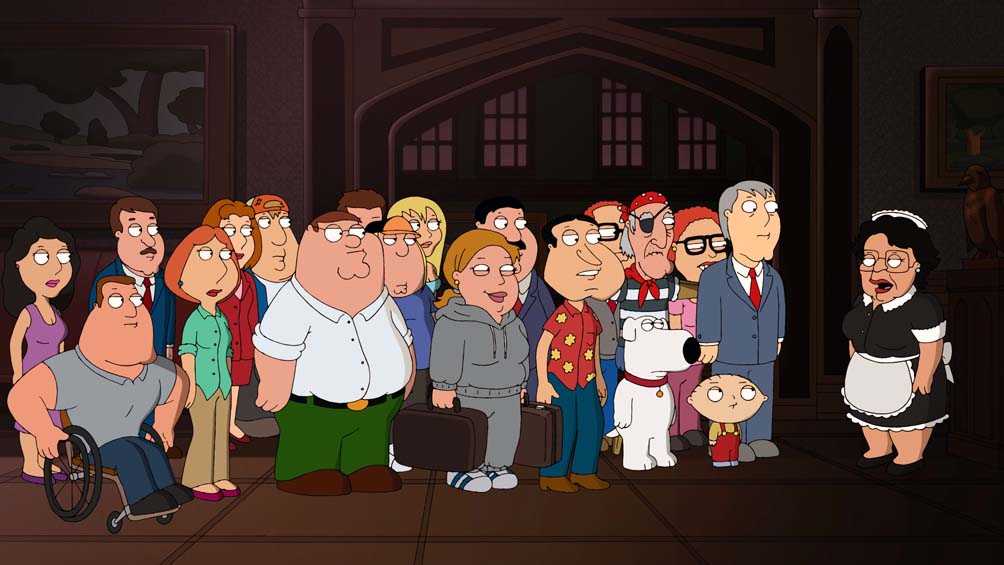 These are just some ideas I had for the future of “Family Guy,” and I thought I’d get them out in case Seth MacFarlane or FOX had any interest in viewing these ideas. Also, if this idea does become official, I would like to make a couple of requests. 1: Can I possibly write the episode (NOT DEMANDING TO, BUT I’LL STILL PROBABLY WORK ON A SCRIPT JUST IN CASE YOU SAY YES)? 2: If I can’t write the episode, can you guys at least credit me? Like, put me in a “special thanks” section or something, I don’t know. Anyway, thanks for reading this post! If “Family Guy” gets someone to fill in the shoes of the mayor of Quahog, I can’t wait to see them with all of these other fantastic characters! Oh yeah, and Meg. I’m not sure what will be happening next weekend, if I don’t see a movie next weekend, I probably will the weekend after because “Transformers: The Last Knight” comes out around that time, which is a movie that probably won’t BOMB at the box office. Get it? Since we’re talking about “Family Guy,” if you want to see more of my written material related to the show, look no further! I have a link to my top 10 BEST “Family Guy” episodes down below! Check it out, I’m sure you’ll enjoy it, but I’ll remind you, there are spoilers written in the post, so be aware. Stay tuned for more great posts, and I want to know a couple things: What is your favorite Adam West role? Also, who is your favorite on-screen “Batman?” Leave your thoughts in the comments, and trust me, I DO READ THEM. Scene Before is your click to the flicks!

“I never had to say ‘I’m Batman.’ I showed up, people knew I was Batman.” -Adam West, himself, “The Big Bang Theory.”