Hey everyone, Jack Drees here, and the 89th Academy Awards are officially over. Right I’m going to talk about some of the highlights of the show, whether or not my expectations were fulfilled, the political jabs, and THAT ENDING. If you have seen the show, chances are you automatically know what I’m referring to.

Starting off with the highlights we are gonna talk about the Walmart receipt films. In case you don’t know what I’m referring to. A group of people were asked to direct 3 films using a list of items shown on one Walmart receipt. One film was directed by Marc Forster, another film was directed by Antoine Fuqua, and there was another film by Seth Rogen along with Evan Goldberg. My personal favorite out of those films was the one from Seth Rogen and Evan Goldberg. I am able to appreciate the other two, but I admire the third film for the number of set pieces it’s able to shove in a matter of moments without feeling bloated, along with the fact that it is able to do something that made me admire Tape Face from season 11 of “America’s Got Talent,” which is make something out of literally nothing. There’s no real big story or backbone, but the randomness which is executed feels like it’s masterfully done and it doesn’t feel crazy. In a way, it feels stupid, but in a way it’s also the work of a genius. And no, I don’t mean that like “Impractical Jokers” stupid, it’s actually kind of complex to explain. 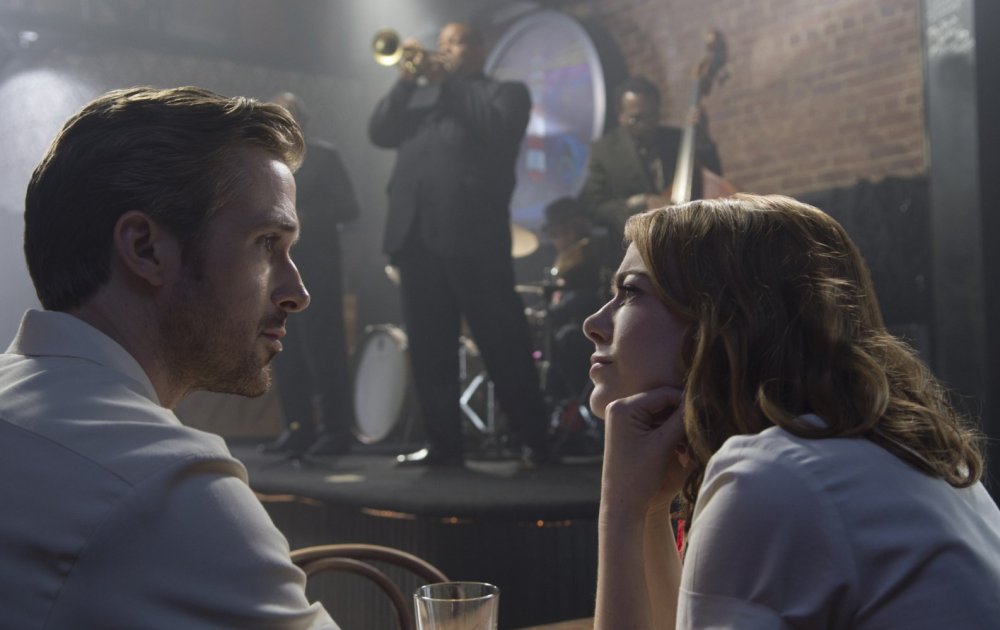 One of the other highlights I will bring up has to do with “La La Land,” and I saw that movie in the theater and it was terrific. When I reviewed the movie, I gave it a 9/10. Going into the Oscars, “La La Land” had 14 nominations. After receiving huge praise from critics, also a high amount from average moviegoers as well, I was expecting a HUGE sweep. Did we get a sweep? Yes. But it wasn’t as big as I was expecting. I was expecting Hollywood to just go on loving itself, but no, the love wasn’t as tremendous as I thought it would be. Just to let you know, the record for the most wins at the Oscars for a film is 11 wins, while “La La Land” didn’t get 11 wins, it got 6, which is still pretty decent. So this kind of makes me think that Hollywood doesn’t love itself as much as I thought. I mean, I wouldn’t mind “La La Land” getting more than 6 awards but it would still leave that thought in my mind. 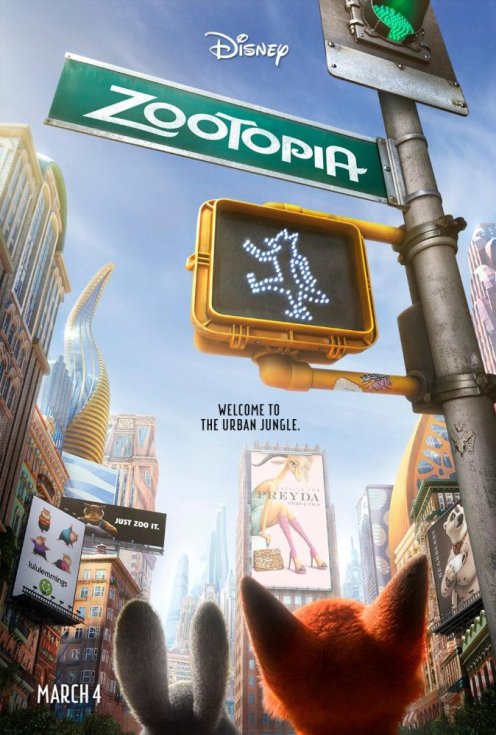 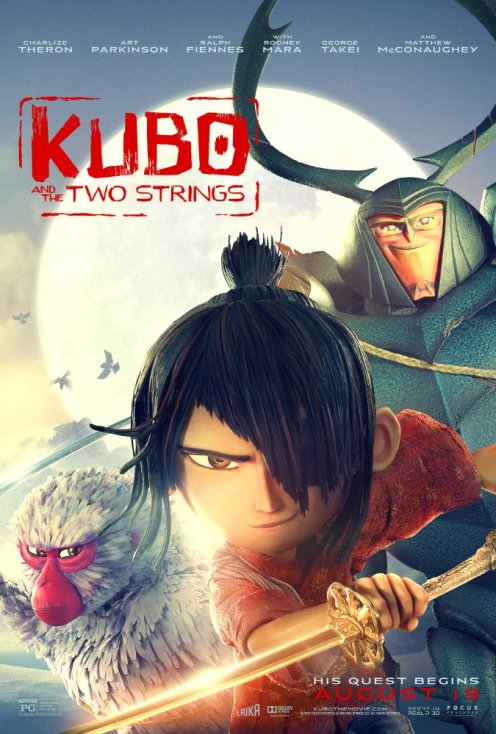 Going into the Oscars, one of the categories I was looking forward to was “Best Animated Feature Film,” I mentioned in my most recent post which has to do with the Oscars that I was desperately hoping that “Kubo and the Two Strings” would win this category. I also mentioned that my prediction for the winner was Disney’s “Zootopia,” which would have been my second choice. “Zootopia” did take the award in that category, which I do approve of, “Zootopia” was definitely the funniest of the animations I watched in 2016, it’s very well animated, and it’s almost a spoof of real life. However, I really do hope “Laika,” the animation studio behind Kubo does get more recognition in the future. I have seen two of their films so far and I really loved both of them. I saw “Coraline,” which was released back in 2009. Beautifully crafted and animated, well written, it had wonderful music, and it was very engaging. “Kubo and the Two Strings” actually managed to be better, like as in, MIND-BLOWINGLY better. I cannot wait to see what Laika does next! 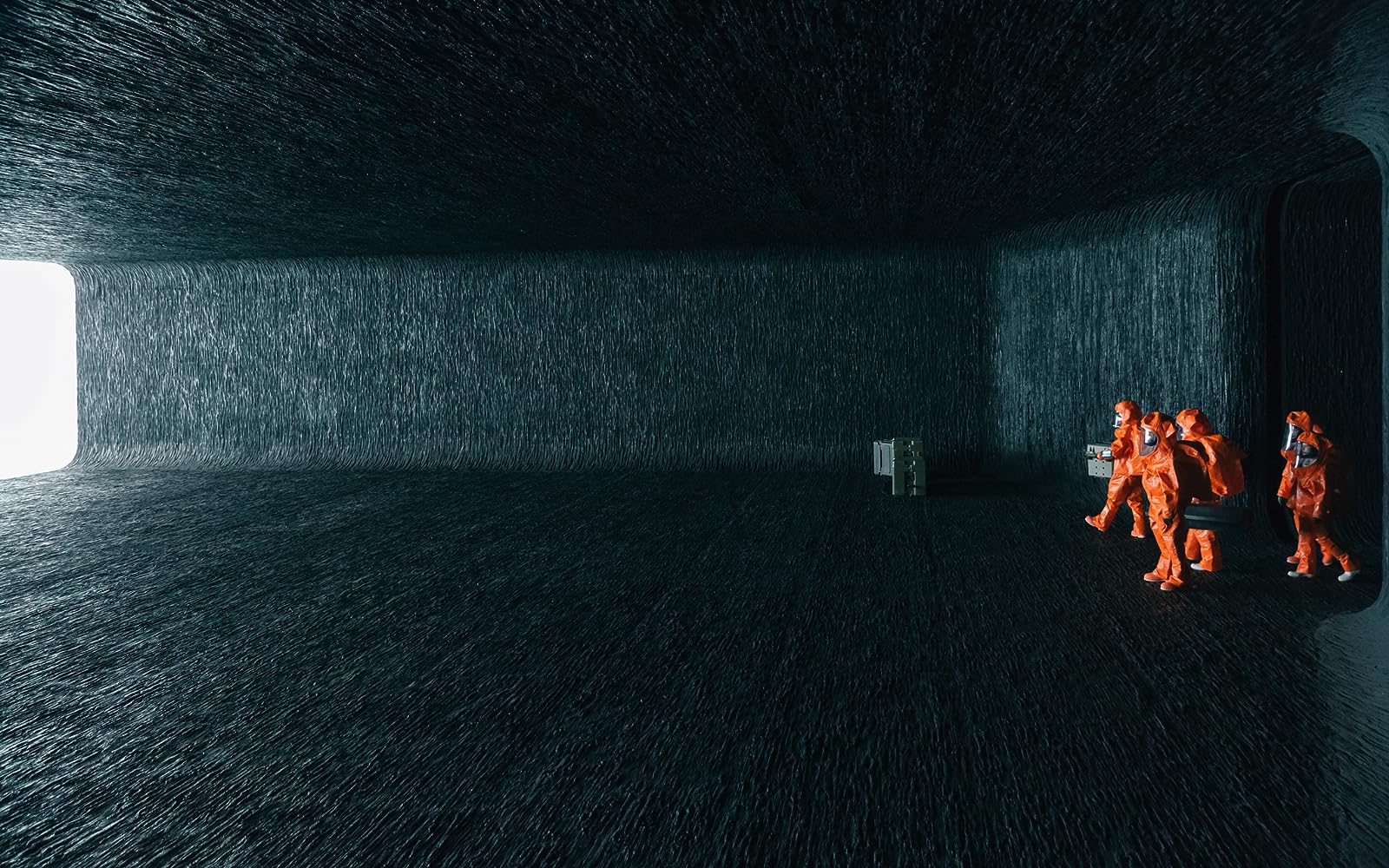 Also, let’s get talking about one of my favorite movies of the past year, “Arrival!” “Kubo and the Strings” was my favorite movie nominated for anything at the Oscars, but of the ones nominated for “Best Picture,” Arrival was my favorite. “Arrival” actually happened to win one award, and that award is “Best Achievement in Sound Editing.” I was honestly expecting “Sully” to win in that category, but the fact that “Arrival” won anything satisfied me and me almost jump for joy. After all, as one who has seen the film, I will say that the film has a nice variation in terms of sound effects, the sound effects are timed well and happen to match with what is going on, and the sound effects themselves sound cool.

I’m now gonna talk about the categories of “Best Actor” and “Best Actress.” I actually got my predictions right for both categories, and I cannot be happier with the picks for these categories. Starting off with the fellow who happened to win “Best Actor,” Casey Affleck, there is NO OTHER CHOICE. As extremely disappointed as I was with “Manchester by the Sea” in general, I was amazed everyone’s ability to act throughout the film to the point where I thought it was some of the best acting I ever seen. Say what you want about Casey Affleck when it comes to that whole sexual harassment scandal, but the dude can act, and the same goes with just about everyone else in the movie. Even Michelle Williams, for the few minutes she’s around, was exceptional. Everything in the movie, despite being much more humorous and witty as opposed to sad, felt realistic and that’s one of the movie’s biggest positives, which I’m really glad to say. 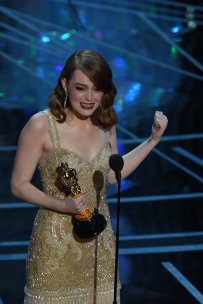 Now, let’s move onto the “Best Actress,” Emma Stone. Emma Stone has proven that she’s a talented actress, and her work in “La La Land” just shows that significantly. In terms of lead actress performances, Stone is up there with Hailee Steinfeld in “Edge of Seventeen” as my favorite lead actress performances of 2016, and Emma Stone deserved her Oscar. Granted, part of it probably had to do with how well written the character was, but regardless of writing, Stone transformed this character, into a person. It absolutely shows during the near end of the film, which overall just made me go “Wow.” So, I would not only like to thank Damien Chazelle, who wrote the movie for coming up with such an inspiring and well written character, but I want to give thanks to Emma Stone for making the character so lifelike and fluid. It’s just, I don’t know, magic. Yeah, that’s the word, I’m gonna go with magic. 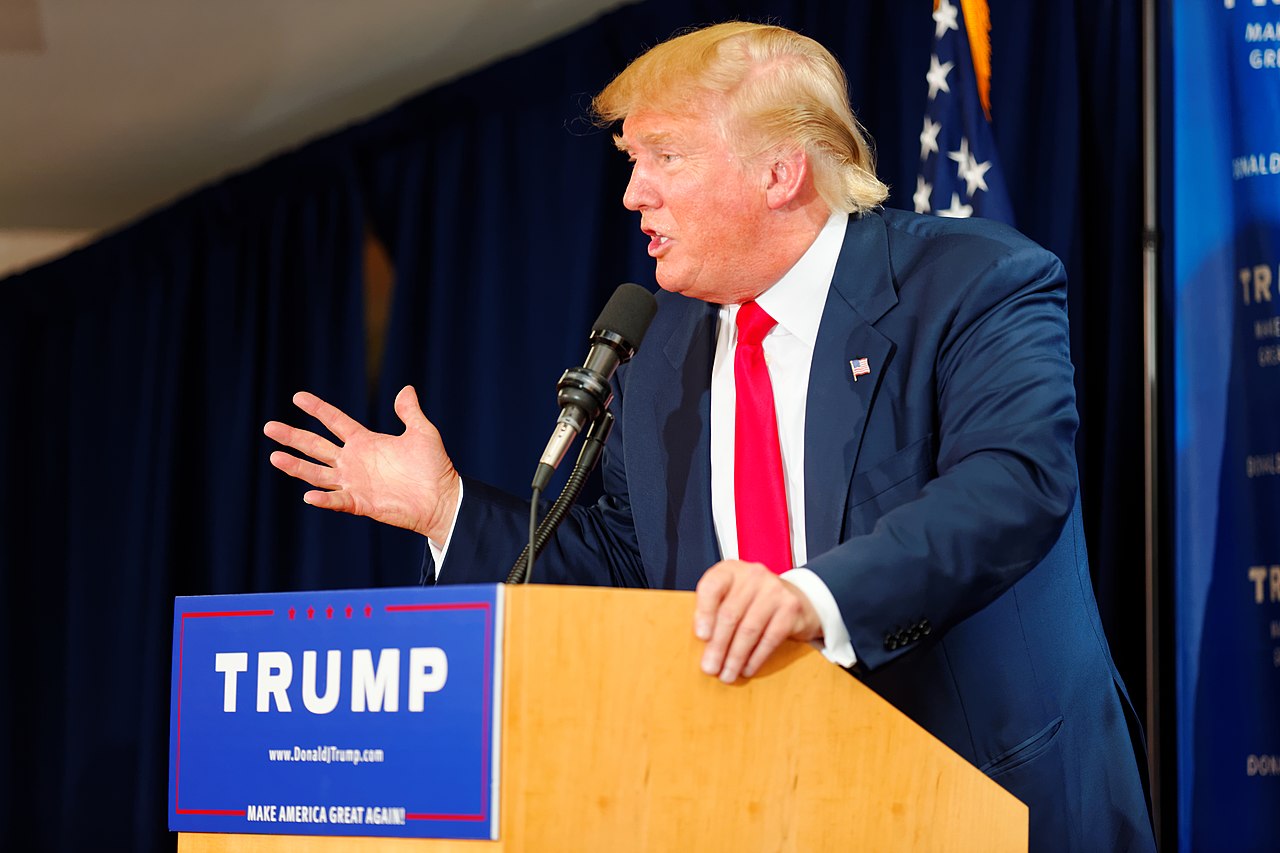 Now, let’s political. Sorry guys, I have to. Heading into Oscar night, a lot of people were expecting a bunch of jokes about Trump, specifically ones created with the intention to destroy him. I will admit there were a few, and as one who didn’t really like just about anyone running for president during the 2016 US election, I will personally admit that there were some jokes that had me cracking. I will say, most of the jokes came from host Jimmy Kimmel so not too many of the celebrities were exposing their political views, which is something I could personally consider a positive. There was even one that I thought was absolutely brilliant and had lots of attendees laughing and it had me busting my guts as well. Jimmy Kimmel went on his phone, there was a screen showing what he was doing on the phone, Kimmel went to Twitter and he tweeted the following:

“Hey @realDonaldTrump u up?”

Then a second later, he tweeted once more, saying this:

If you have you have seen or heard about Meryl Streep’s speech at the Golden Globes, chances are you will understand this tweet. By the way, there were less political jokes than I was expecting, so I consider that a nice plus. 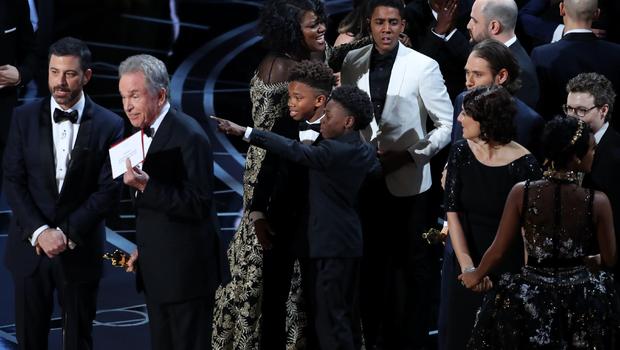 Now, let’s talk about the ending that shocked everyone! Remember when Steve Harvey made a huge mistake at the 2016 Miss Universe show? Get a load of this! The Oscars are just about to come to an end, the “Best Picture” nominees were just announced, and the winner was announced. That award went to “La La Land,” which when I heard it, did not come off as a huge shock to me, I thought the film deserved it, but at the last second, it turns out that isn’t the real winner. Warren Beatty had the wrong card! The REAL winner was “Moonlight,” another movie which I wouldn’t have been surprised with taking the “Best Picture” spot. I gotta say, I don’t blame Warren for this, he didn’t have the card. Comparing it to the Miss Universe incident, Steve Harvey had the right card, but he read it wrong. Warren Beatty at the Oscars had the wrong card, but he read it right. I thought this was completely scripted, like, Jimmy Kimmel came up with this going into the show, and that was a joke. At another point, I thought there would be a tie between the two movies. Just wow. If I have anything else to say about it, I’m noticing a funny connection between this year’s Academy Awards and last year’s Academy Awards. The winners for “Best Picture” both have the word light in them. This year’s winner is “Moonlight” and last year’s winner is “Spotlight.” Just thought I’d shine some “light” on that. Also, I’d like to give kudos to the folks of “La La Land” for being good sports when they found out about the mistake. In fact I heard Emma Stone talking after the Oscars finished and the after party started. She stated “Moonlight” was one of the greatest movies of all time, so I can tell Emma was able to respect the movie’s victory. After all, I bet she’s pretty satisfied considering she won “Best Actress.”

Well that’s it for my thoughts on the 89th Academy Awards, and I just want to know, did you watch the Academy Awards? What did you think about it? Did you get any of your hopes or predictions met? What were your favorite moments from the show? Leave a comment! Right now, considering the fact that “Moonlight” won “Best Picture,” I want to go see it. Will I see it? That will be determined in the future, but it’s something I’m keeping in mind right now. Also as far as other movies go, I might want to see “Fist Fight.” If I do manage to see either of those movies, be sure to stay tuned for those reviews, along with other reviews aside from those, plus other random posts I might be in the mood to create. Scene Before is your click to the flicks!