Hey everyone, I just did my top 10 BEST movies of 2016 and now it is time to get negative, that’s right, it is time for the top 10 WORST movies of 2016. And before we get into this, I have not seen every movie that has come out this year, I mentioned before I wanted to see “Equity”, I mentioned it more than once, well guess what? Never saw it. I actually found it for $22.99 at Best Buy the other day but I didn’t think it was worth it. Maybe someday I’ll get it when the price goes down or worst case scenario I can just rent it on Amazon Video. Also, I’m not saying you should hate these movies, these are just the 10 films that I hate which came out this year, so different strokes for different folks. Oh, and one more thing, I am only doing movies released in theaters, so “Sharknado 4: The Fourth Awakens” is off the list. Anyways, let’s get started with counting down my top 10 WORST movies of 2016. 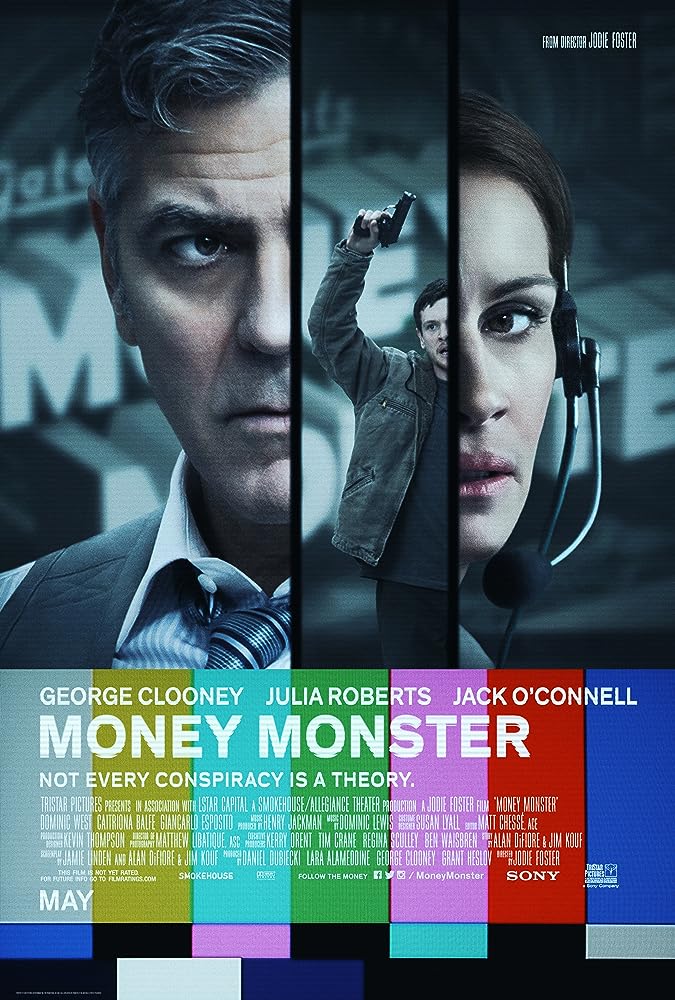 Coming in at #10 is “Money Monster”, in this movie George Clooney and Julia Roberts are doing a financial TV show and some guy starts invading the studio, therefore setting up a thriller. Sounds intriguing doesn’t it? Trust me it’s not. George Clooney sounds like he’s playing himself in this movie and it very much reminds me of when he played Batman, which was not that great. I mean, the film is edited well and the directing is OK, but the little things in this film are just so jarring and this is a ride I started to forget about once I left the theater.

#9 is “Gods of Egypt”. Out of all the movies on the list, this actually may have been the most entertaining of the bunch, but it doesn’t change the fact that it’s terrible. First off, the casting is incredibly misleading and controversial. What do I mean? This film is called “Gods of Egypt”, but there is not one Egyptian actor in this movie. Second, the movie itself is hilariously bad, overacted to the ninth degree, and bloated with CGI. If you do happen to think that you should check this out one day, invite some friends over to your place, roast the movie Mystery Science Theater style. I can imagine it would be that sort of movie. Although I will admit some of the CGI kind of looked cool. If this film weren’t at least watchable this would be higher on the list.

Coming in at #8 is “Independence Day: Resurgence”. I enjoyed “Independence Day”. Although I can’t say the same for this sequel. First off, this sequel took 20 years to make so it felt kind of unnecessary, and the characters aren’t really that likable. Will Smith is not even in this movie so that says something. The humor that was even put in this movie didn’t work. The movie even ends on a cliffhanger, setting up a sequel that sounds promising, but kind of leaves me wondering if it will just be a cash grab. The only good things in the movie are the flying sequences and the effects, that’s about it.

Here we have one of the first movies I’ve seen this year, and that’s “The Finest Hours”. This film is based on the true story of a coast guard rescue mission in Cape Cod during the year of 1952, despite how this mission is still remembered to this day, it doesn’t change the fact that Disney made a horrible movie out of it. There was a romance that felt very unnecessary, and if it actually did have SO MUCH to do with the actual story, then I guess I can bump this a little lower, but this movie is boring at times, and there’s one sequence with unnecessary singing that baffles and annoys me to this day. I mean of course, what else do you expect from Disney? Once again, if that actually happened, I’d want to know, but this is too much of a fantasy in my book.

I enjoyed the previous “Divergent” installments, but it doesn’t mean this one was good. That’s right, #6 is “Allegiant”. I never read the books, but for what I know, this is the last book split into two parts, which is one of the worst cliches in the film industry, but that’s probably the least of my problems. This is just a mess with bloated CGI, taking the characters that were at least tolerable from the previous installments and just ignores what made them interesting. I love Miles Teller, he’s proven himself to be a great actor, but in this movie, his character is horribly annoying, and he’s probably one of the worst characters I’ve seen this year. Also, just to prove to you how bad this movie is, the next movie in the franchise is going to be a straight to TV movie.

Coming at #5 we have one of the most forgettable films this year, which is “The Girl on the Train”. This movie had an interesting concept, along with a good performance by Emily Blunt, but this movie as a whole, was boring. I don’t even remember this movie, and based on how much I felt appalled leaving the theater after this mess, I’m glad I don’t remember it. This movie is probably good if you want something to fall asleep to. Let’s say that it is around 2AM and you can’t sleep, just turn on this movie, I guarantee you’ll get tired watching this.

I never watched “Twilight” and I also never watched “Fifty Shades of Grey”, but based on my knowledge of those films and my experience of watching “The Fifth Wave”, I probably say I’ve seen them now. Chloe Grace Moretz plays one of the weakest heroes I’ve seen this year, and the romance is not only extremely forced, but I do not buy it at all! Oh, there is one scene I witnessed in this abomination and the lighting in that scene is probably some of the worst I’ve ever seen in a movie. For what I remember, there was like fighting involved and I couldn’t even see what was happening so it really irked me. I wasn’t a fan of the movie’s trailer and TV ads, but I thought there would be something likable that I would get out of the movie. Well guess what? There was nothing! I’m just glad I got to see this free on Starz On Demand that way I didn’t have to pay for a couple hours of pain and suffering.

I mentioned in my top 10 best movies of 2016 that if there is one genre of movies that was phenomenal this year, it had to be animations. Although that doesn’t mean there were some inferior ones, and “Ice Age: Collision Course” is just plain awful. I love the “Ice Age” films, but did we really need a fifth installment? No we didn’t! The animation in this movie isn’t too bad, but everything else in this movie is completely unbearable. The jokes were s*itty, the concept was wasted, the characters were degraded to such a low level that it makes me angry. This film may as well have been the result of some people at Blue Sky getting drunk and thinking this would be a grand idea, then suddenly we get this atrocity that just screams the words “cash grab”. Don’t let your kids watch this film, they will end up slightly dumber from watching this. Go show em the first “Ice Age”, or even the second one, I actually like the second one better.

I didn’t want to see this movie, but I put up with it anyhow, and boy was I right about my lack of anticipation. “Mother’s Day” is just a pile of garbage. This film is about three generations coming together leading up to Mother’s Day. Throughout we get this junk that isn’t funny, has tons of product placement, no likable characters, and lots of cringe. Oh, the cringe, I don’t even recall exactly what made me cringe most in the movie but I dredged through this film for my mom. Oh and did I mention the bad product placement? There’s this one scene where two characters are in front of a vending machine, it made me want to repeatedly punch a wall for fun. This film does not make Mother’s Day special. This is basically a commercial for so many things, but most noticeably the Home Shopping Network. This movie sucked, don’t watch it and save your money.

At #1, we have a film that made so angry, even before it came out, and I thought I would be relieved when seeing the film itself because I thought it couldn’t get any worse than the trailer, but I was wrong, that film is “Ghostbusters”. How does movie exist?! I can’t even began to comprehend how unneeded this piece of crap is! I know that this movie is meant to empower women, and I know that the idea is if you don’t like this movie because there’s women you’re labeled as a sexist pig. Let me just say, the idea of replacing the original Ghostbusters with women is lazy and unoriginal in my book. It’s like the idea of whitewashing: Lazy, unoriginal, and makes characters feel less authentic. Not only that, but the writing for this movie is some of the worst of all time! It’s not funny, it’s stuff we’ve seen before, it’s jarring, and it makes no sense! Oh, and I’m not even done, basically around the movie’s release, a good portion of the cast were delivering a message saying that if you dislike this movie you are a sexist. You know something? This movie may be sexist! While this movie tries to empower women, it basically tries to destroy the male gender in every way, shape, and form possible! Especially during the final boss fight, don’t even get me started on that… Also this movie features cameos from the original Ghostbusters, with the exception of Harold Ramis who already passed away. They are all terrible. This movie got ONE chuckle out me and that’s literally it! Also, if this leads to someone thinking a remake for “Back to the Future” is a good idea, I ought to write an essay about why it isn’t, and I will track down that person and literally hand them the essay! You know what? I’m still not done! The lore is basically ignored throughout the film. Stay Puft was ruined, Slimer was near-tolerable until a female Slimer came in, and the idea of how the Ghostbusters logo came to be is cringeworthy the more I think about it. Oh, and one thing I won’t go without mentioning, is the references. There are multiple references to movies and they are also ruined. F*CK THIS MOVIE! That’s it, I’m done! I don’t have to talk about it again. I feel like Frodo when Gollum vanished in the volcano during “Return of the King”.

Well 2016 is over, and this may have been one of the worst years of all time, if not the worst. Although let’s look forward to a great 2017 and hope that it will work out well for everyone. I can’t wait to see what 2017 brings when it comes to movies and I hope they’re all good. If you want to take a look at my top 10 BEST movies of 2016, I’ll have a link down below, go check it out, and stay tuned for my reviews in 2017 and Happy New Year everyone! Scene Before is your click to the flicks!