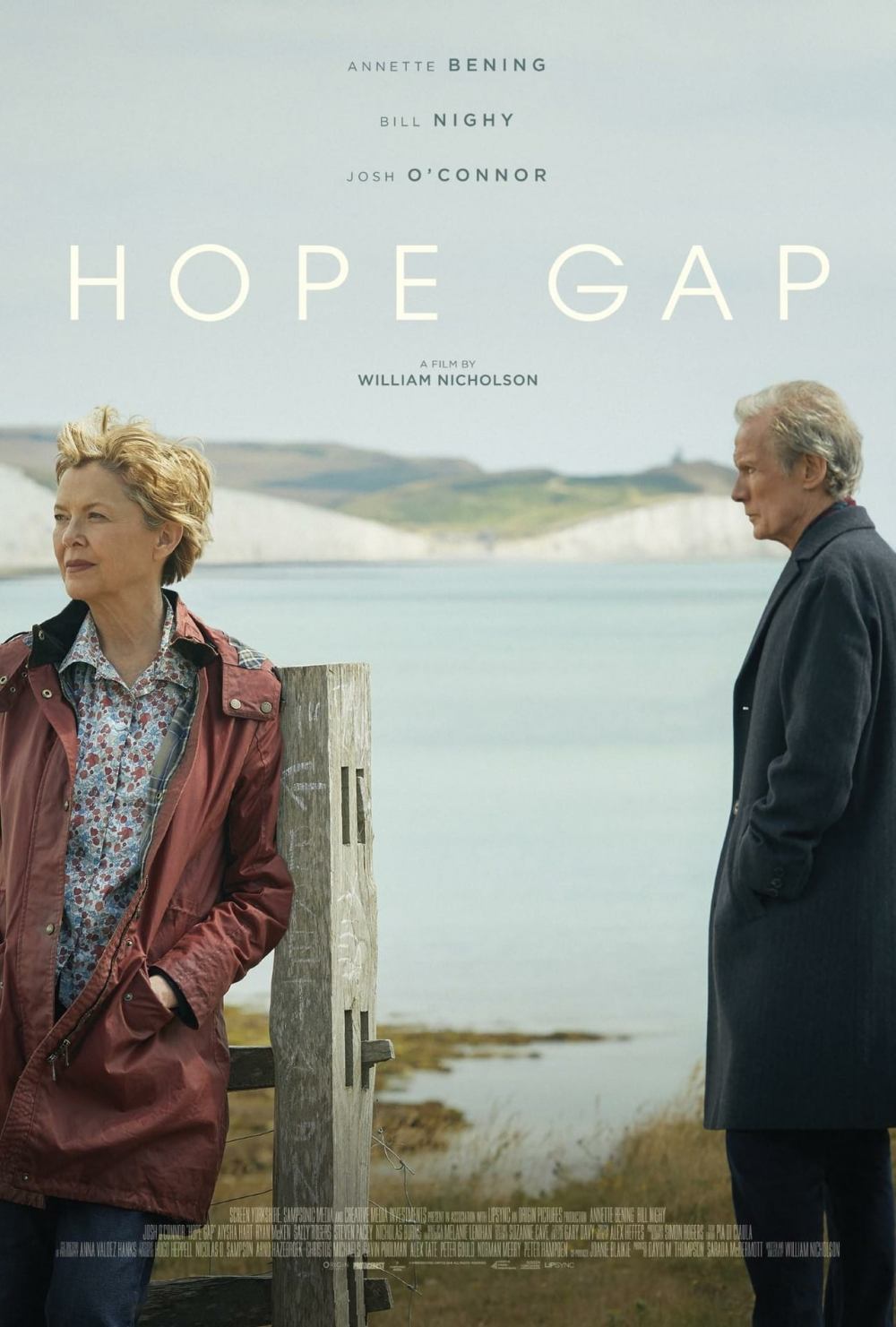 “Hope Gap” is directed by William Nicholson (Gladiator, Les Misérables) and stars Annette Bening (American Beauty, 20th Century Women), Bill Nighy (Love, Actually, The Best Exotic Marigold Hotel), Josh O’Connor (The Crown, God’s Own Country), Aiysha Hart (Line of Duty, Atlantis), Ryan McKen (Game of Thrones, Bancroft), Steven Pacey (Blake’s 7, Doctors), and Nicholas Burns (The Crown, Benidorm). This film is about a couple, whose son is returning home for some time. As we progress through the movie, we begin to notice that the couple cannot quite click. We notice that they have trouble communicating, and it is also revealed that the husband has plans to leave the wife, thus we have our movie.

Looking at “Hope Gap” on the surface, it may not exactly be my type of movie. But just because something is not necessarily my “type” of film, does not mean I am going to count it out on my viewing list. It just means I may have priorities. Speaking of priorities, when the heck is “Tenet” going to hit theaters?! Anyway, “Hope Gap” was available to me as my mother rented it On Demand and I figured why not give it a watch. What have I got to lose? It’s 2020! It could be worse! It could be murder hornets!

Having said that, I watched the movie, and I will say… Is it just me… Or did movies just rise from the dead?! For the past few months, I felt like there has been nothing to talk about, nothing to get me excited, nothing to pump me up as a film fanatic, but now, back to back, I have seen TWO of my favorite films of the year. And what makes this film in particular a little extra special is how it’s not even in my wheelhouse of film genres. Yes, a lot of the actors in the film like Annette Bening and Bill Nighy have done acclaimed work in the past, in fact some of the movie’s cast have previously worked on another highlight of 2020 for me, “Emma.” The cast in this movie has a knack for talent and it shows here with some of the finest performances I have seen all year. But, I’ll mention, like the last film I saw which I reviewed… It’s not perfect, and once again, 2020 continues to be the worst year for film that I have witnessed, maybe ever. 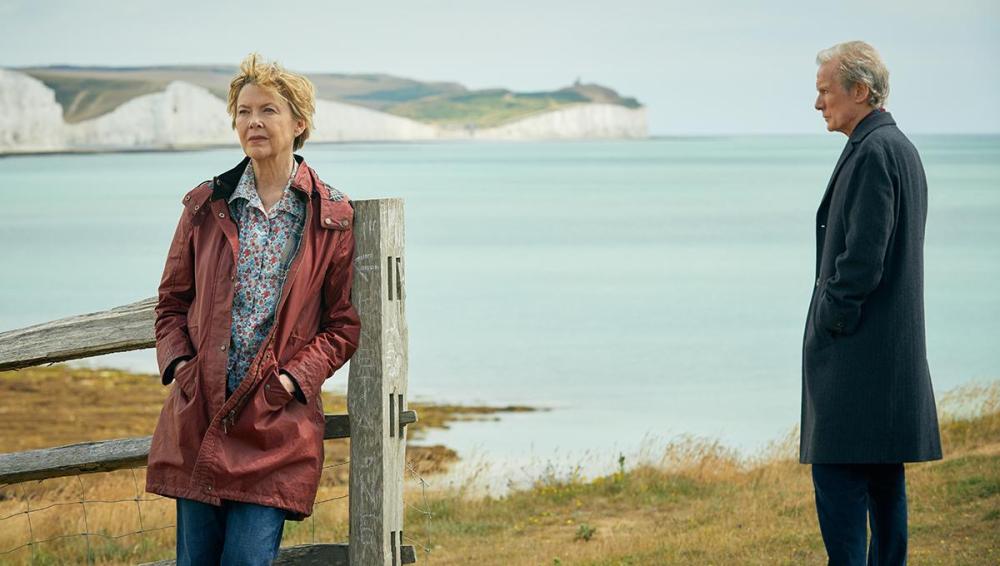 Much like last year’s “Marriage Story,” which is a remarkably well-made masterpiece by the way, “Hope Gap” centers around a married couple who evidently cannot click. The performances from Bening and Nighy reveal this with a ton of force. Not only is their acting and chemistry believable and satisfying, but they are also well-written. Going back to “Marriage Story,” as I look back on that movie, I can point out to several moments where either member of the marriage can be labeled as a jerk. Here, I picked up that a lot of the reasons why this movie unfolded was mainly having to do with the husband, who seemed to display one very notable quality as the movie went on. He seemed very passive, at least when his wife is in the room. There was this scene in the movie where the wife got a bit serious and wanted the husband to express himself or open up, but he always seemed rather silent, perhaps uninformative. He never really felt any need or reason to tell his wife what he wants or needs. I sort of felt bad for the man even if he was the main catalyst for the main couple’s relationship going down the drain.

Interesting thing though, I have been through the process of seeing my parents have a falling out, separate, get divorced, and throughout the process, I was distraught. Admittedly, I still am today, seven years later, which is why I do my best to cherish the family I have as much as possible and see them when needed. Now, I will say, one of the main characters of “Hope Gap” is the couple’s grown son, he comes back home to visit his parents, his room has barely been touched, it’s even got a twin bed in it. My parents divorced when was in my teens. This guy is rather grown up, and during the movie… He doesn’t really seem to care about anything that happens to his parents, it doesn’t matter. After all, he’s on his own, he’s got his own life. Why does he have to care about the people who raised him? He never really reveals much of his emotions towards these dramatic and life-altering situations. In fact, I find it really funny how in the IMDb description, it mentions that the visit takes “a dramatic turn when the father tells him (the son) he plans on leaving his mother.” The drama, even though it is there, feels more like drama, for us, the viewers, the people in the movie themselves barely experience it. We’re along for the ride, and we see a passive husband, a son who barely gets involved in any of this other than actively listening to his parents, and the only person who truly feels traumatized or highly affected by all this in such a negative way is the wife. Is that a bad thing? No. Because the script of the film flows properly, and that along with several performances makes you buy into everything that’s going on.

They say divorce is hardest on the children, but this movie made me think… If my parents stayed together, until I was… say 35. How would I feel about them getting divorced regardless of the situations/buildup that triggered them to go down this path? I mean, it is a life-altering situation, in fact of all the situations that I can think of in my life that I have personally been through, I think the divorce of my parents has altered me the most. Although, the COVID-19 pandemic might take that crown eventually if more s*it starts to go down. But hey, movie theaters are open in my state, so yay! If this divorce thing happened in my early twenties or my thirties or forties, would I try to get my parents back together? Plead them to stay? Or would I just stand by and let them go their separate ways? This movie in ways mixes drama with that “slice of life” feel and the vibes mix with excellence. I think it was a somewhat realistic portrayal of what could happen in a situation of this kind. There was even a moment where the wife got a dog, and I imagine it is being done sort of as a stress reliever or coping mechanism.

Did I mention this movie is shot beautifully? I mean, I think a lot of it has to do with the location choices more than anything, but this movie has some of the nicest shots of the year. 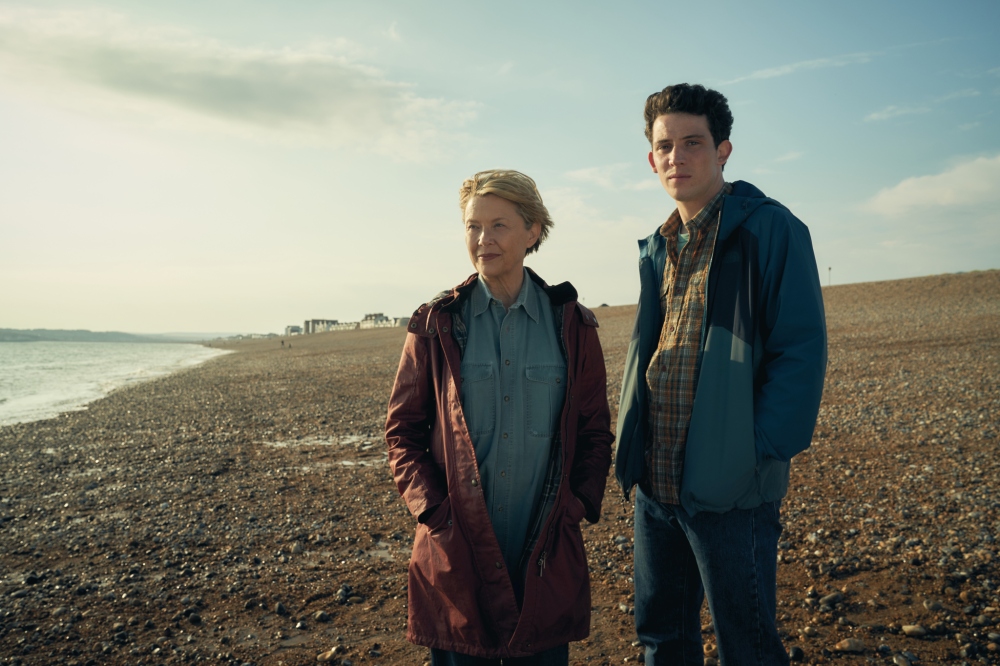 In the end, “Hope Gap,” kind of like the last movie I reviewed, “The Vast of Night,” is one of 2020’s finer entries to the cinematic calendar. BUT, it’s not perfect. I will say, the movie does keep its pace for the most part, but there are a few moments where the movie does slow down just a bit. Also, even though the movie is pretty good, I don’t think it had the full on dramatic impact it was hoping to deliver. It made me feel something watching the movie, and it did touch upon a life-changing subject I can relate to. It did make me think, but not in a way that really made me reevaluate my life for as long as time shall march on. However, do not sit out on “Hope Gap.” If you find it and decide to watch it, I don’t think you’ll be completely disappointed. With that being said, “Hope Gap” is a high note for 2020, and I’m going to give it an 8/10.

Thanks for reading this review! I just want to let everyone know, phase 3 has officially begun in Massachusetts, which means that movie theaters have been given the green light to open as long as they follow along with government-based restrictions and guidelines. Not many theaters are opening in Massachusetts, but I do know of a fairly close one set to open its doors on this Friday, July 10th. If I have the time, I’m gonna make the trip to the theater to see a movie, get a review for you guys, and see what they’re doing to get through the pandemic. I cannot wait to see a movie in a dark room again where I do not have any reason to look at my phone. You don’t know how much I miss this experience… Be sure to follow Scene Before either with an email or WordPress account! Feel free to leave this post a like if you have a proper account setup, share it with friends, and like my Facebook page! I want to know, did you see “Hope Gap?” What did you think about it? Or, are movie theaters open where you are right now? If they are, what are doing in terms of safety precautions? If not, is there any word on what your local cinemas will be doing upon the reopening process? And yes, I know chains like Regal and AMC are currently set to open on July 31st, but also if you have any local theaters that are within smaller chains or independent names, I want to know about those as well. Let me know down below! Scene Before is your click to the flicks!