Hey everyone, Jack Drees here! Just a reminder that we are days away from the opening of Quentin Tarantino’s newest film, “Once Upon a Time in Hollywood” and I just want to let everyone know that I WILL be going to see it this Thursday in 35mm! I will also be reviewing the film as soon as it releases and by that I mean, hopefully by the end of the Sunday which it comes out. I might not have it up right away because I’m going to see the film on Thursday at 7:30, I’ll be out of the theater 2 to 3 hours later, meaning I won’t be home until sometime before or after 11PM. Then on Friday I’m going to New Haven, CT, which is 2 to 3 hours away from my house. I’ve got a busy weekend ahead, but it’ll likely be fun, so I’m excited! But, the movie is not out yet, so I am going to be reviewing my third and final entry to my Quentin Tarantino review series, specifically “The Hateful Eight.” This is the most recent product Tarantino directed and it even features his voice through narration. Without further ado, let’s begin!

This is the latest film from Quentin Tarantino, and it was also one of those films that I really wanted to see in the theater. Unfortunately, I missed out. One of the reasons I wanted to go see the film in a cinema was due to the technology used for filming and presentation. This film was entirely shot with 70mm cameras, and much like director Christopher Nolan, Quentin Tarantino is very particular to how his films look. After all, both directors have this in common. They either shoot on film, or they choose death. I have noticed that Tarantino has shot all of his past projects on 35mm, which is something he is also doing for his upcoming film for “Once Upon a Time in Hollywood.” But this is Tarantino’s first attempt at shooting a full-length 70mm movie. And with that in mind, he’s trying to hark back to an era of old Hollywood, when glorious films like “Lawrence of Arabia” and “2001: A Space Odyssey” were shot in the same format. He even did a special engagement with select theaters where they would show the movie in 70mm (or sometimes digital), and present it in a roadshow format. This even had an intermission, which many of the other theaters’ versions of the film did not include. So if you went to see this in digital at your local Regal Cinemas, chances are you watched from start to finish.

In fact, another thing that I noticed was completely different compared to many other films is the aspect ratio. This film is presented in 2.76:1. Most modern films are usually not as wide. In fact, of any film I have seen to this day, this is without a doubt the widest. This is definitely a unique modern film in its own right simply because of how it looks, how it presents itself.

Sadly though, while this movie manages to be extremely impressive in visuals, it manages to simultaneously suffer as a story. Granted, it’s not bottom of the barrel. In fact, the day I see a bottom of the barrel story from Tarantino is the day I think the entire art of filmmaking is dead. There are some elements of “The Hateful Eight’s” script that I can appreciate. It’s mysterious, occasionally suspenseful, and it has this one gag involving a door that I happened to appreciate from a comedic standpoint. I thought it was up there with the funniest parts of the movie.

But if you had to ask me what my biggest problem with “The Hateful Eight” is, it’s the characters, because I can barely remember any of them at this point. I should note, I watched this movie last Thursday. I guess a couple of the characters have interesting conversations, including one about a particular character’s interactions with US President Abraham Lincoln. Although when it comes to overall personality, none in particular stand out. The characters do and say cool things, but it doesn’t add up to making the characters lovable. Just me.

Although I did some research before this movie came out. If you don’t know, Tarantino’s film prior to this was “Django Unchained.” When this project first got into gear, Tarantino’s original vision was to make this a sequel to “Django Unchained.” And if you watch this film it is easy to tell the elements for a unrealized sequel are there. This is in the western genre, around the same time period, and a couple actors including Samuel L. Jackson and Walton Goggins happen to appear in both movies. Did I mention both films came out on Christmas Day? While I do appreciate Tarantino for sticking to original material as opposed to expanding upon something that already exists, the mediocre quality of this movie almost makes me curious to know what would happen if this either took place in the same universe as “Django Unchained” or if Tarantino just stuck to writing a sequel to his previous film as opposed to having to spend lots of time developing something new.

Speaking of Tarantino, I’m willing to bet some of you who watched the movie may have noticed the narration during the film. For those of you who have yet to see “The Hateful Eight,” I won’t share the narration because it does dive into something important that can be seen during the film. But before checking this movie out, I was reminded by my dad of the film’s quirky narration, which quite honestly, was not that quirky if you ask me. Plus, to be honest, while it can be attention grabbing when it happens, it feels very out of left field. Why? While this is a “semi-spoiler” (maybe), there is no narration in the first half of the movie. It just happens at this random point where Tarantino probably was writing the script, didn’t find a character that was a good match for him that he could personally portray. Then he thought, “Hey! I can be the narrator! Perfect!” It’s a weird complaint and I almost question myself for making it, but I can’t help myself. It just stands out! Then again, I kind of made a similar compliant, while not exactly the same, for 2018’s “The Grinch,” so I guess it works here!

If you ask me, Tarantino has this excellent ability to match up a stellar script with spectacular locations or setpieces, or gorgeous cinematography. This movie rules in the technical department, I almost forgot to mention how much I enjoyed listening to Ennio Morricone’s score at times, but it fails when it comes to keeping me on the edge of my seat. Maybe it’s one of those movies that I have to pay full attention to with no distractions (in fact, I had to pause the movie to complete a task that took 30 minutes). But nevertheless, compared to Tarantino’s other films, this one just sticks out like a sore thumb because the characterization just feels weak in certain places. The only characters I feel like I’ll end up remembering are Marquis Warren, John Ruth, and Domergue. If I had to compare the behind the scenes efforts of this movie from Tarantino during this film’s production to another well known director, it would probably be Zack Snyder, because he’s very much a director who relies on style. This is evident in a movie like “Sucker Punch,” which at this point, I don’t particularly recall appreciating for the story or characters despite one or two kick-ass scenes. After all, one thing that would probably save the movie from being lower than the score I gave it when I first saw it is the amazing long take action scene that occurs on a train. There are redeeming qualities about “The Hateful Eight,” but they’re not enough to satisfy me. 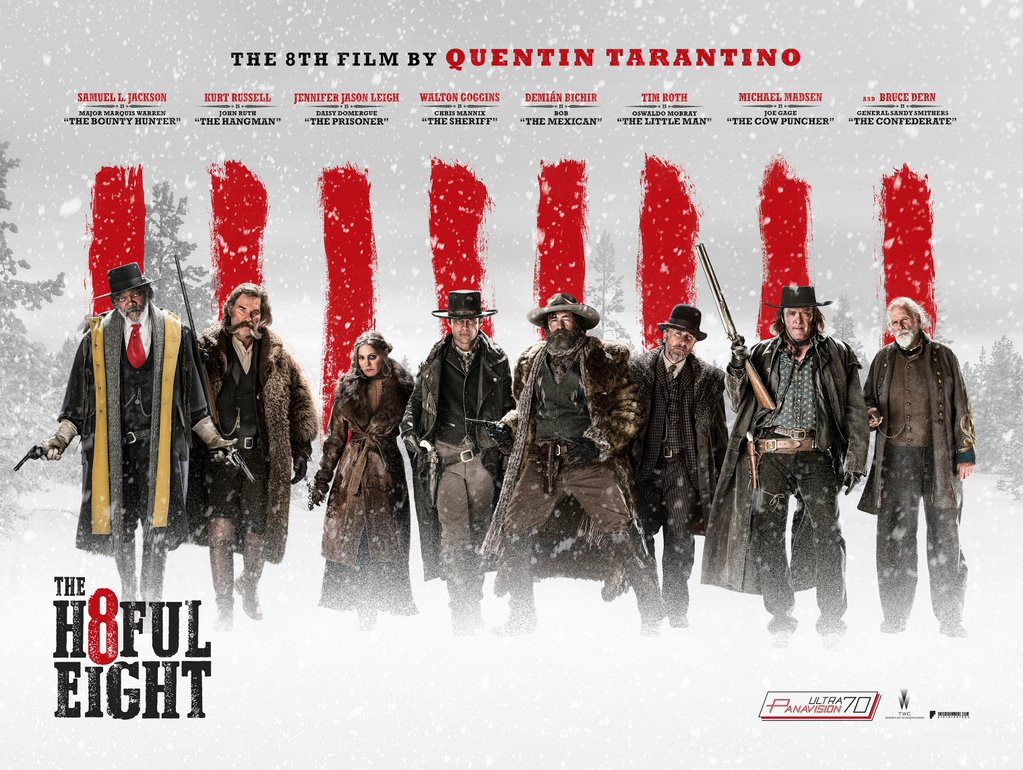 In the end, after my watch of “The Hateful Eight,” I was slightly disappointed. Granted, I knew going in, according to others, this is not Tarantino’s best work, but even when you consider his resume and the fact that his name is attached to this, I might as well not be wrong to expect nothing but excellence from “The Hateful Eight.” To me, this film kind of reminds me of “Avatar.” It’s a film that looks very nice on the big screen, and is definitely built for a cinematic environment, but the story is not the strong point of the movie. I have not lost my faith in Tarantino however, partially because the trailers made his next film, “Once Upon a Time in Hollywood,” look really good. Plus, it’s already getting good reviews, but “The Hateful Eight” still left me with a less than satisfying taste in my mouth. Sure, it hits a number of the cool Tarantino checkpoints. Gritty violence, pretty locations, attention-grabbing dialogue (despite weak characters), and giving Samuel L. Jackson an interesting hairstyle. But if someone were to come up to me and ask me to recommend a Tarantino film, “The Hateful Eight” would not be my first pick. I’m going to give “The Hateful Eight,” as much as it kind of feels criminal to say this, a 6/10. And before I go off on other ramblings, I would like to point out Samuel L. Jackson’s performance. It’s good. But, there’s a scene where I personally think he overacts to the point of cringe. Just saying. Thanks for reading this review! Just a reminder that tonight I am going to be seeing the new film “Yesterday,” directed by Danny Boyle (Slumdog Millionaire, 127 Hours). I expect to have my review up by Thursday because on that day, I’m going to see “Once Upon a Time in Hollywood” opening night, and I feel like I should have just about nothing else blog-related that I should focus on during the weekend. In addition to all this, I have to give a report and my thoughts on some big news for Marvel, “The Avengers,” and the movie industry as a whole. If you follow movies, chances are you may know what I’m talking about. Be sure to follow Scene Before if you have an email or WordPress account, and once you click the follow button, be sure to stay tuned for more great content! Also, check out my Facebook page! I want to know, did you see “The Hateful Eight?” What did you think about it? Or, what is a movie from a director that you really love that disappointed you in some way? Let me know down below! Scene Before is your click to the flicks!