Hey everyone, Jack Drees here! Before we begin this post, I want to announce that I officially purchased my opening night tickets for “Once Upon a Time in Hollywood,” which is the latest film from director Quentin Tarantino. I’m going to see the movie in 35mm and I will likely have my review up by the end of the opening weekend. But since that movie is not out yet, I am going to be tackling a couple more Tarantino films from the past including one of the latest additions to the director’s library, “Django Unchained.” I sat down last week, watched the film for the first time, and let me just say, any movie that has Robert Carradine (King of the Nerds, Revenge of the Nerds), chances are I will have some interest in checking out. Without further ado, let’s start the review!

“Django Unchained” is directed by Quentin Tarantino (Reservoir Dogs, Pulp Fiction) and stars Jamie Foxx (Ray, Collateral), Christoph Waltz (Inglourious Basterds, The Green Hornet), Leonardo DiCaprio (Titanic, Inception), Kerry Washington (Scandal, Save the Last Dance), Samuel L. Jackson (The Avengers, Snakes on a Plane), Walton Goggins (Justified, The Shield), Dennis Christopher (Breaking Away, It), James Remar (2 Fast 2 Furious, Sex and the City), Michael Parks (Red State, Planet Terror), and Don Johnson (Miami Vice, Nash Bridges). This film involves a dynamic duo, specifically a freed slave and German bounty hunter. The freed slave’s main purpose throughout the film is trying to reunite with his wife. To do that, they have to travel to a plantation in Mississippi.

I was pretty excited to watch “Django Unchained” for a number of reasons. As of watching “Pulp Fiction” and reviewing it, I instantly had Tarantino fever. “Django Unchained” had a decent cast including Jamie Foxx and Leonardo DiCaprio. Plus, while he does not play a major role, Robert Carradine, one of the members of the legendary Carradine acting family, is in this movie. While I may not be invested in said family, Carradine is personally one of my idols simply for being host of “King of the Nerds,” one of the only good reality shows to ever exist. I was pretty much set for whatever Tarantino was going to deliver.

I just want to remind everyone that in the name “Django,” the “D” is silent. But as for my thoughts on the film, I almost feel that in a world where praise can make noise, my praise for “Django Unchained” would be pretty freaking audible. That is not to say that it is as good as “Pulp Fiction,” there are a couple issues I have with “Django Unchained,” including one or two that could be used in comparison to “Pulp Fiction.”

When I watched “Pulp Fiction,” I had my eyes glued to the screen for pretty much the entire picture. Part of me wants to say that for “Django Unchained,” but I’d be lying if I didn’t go without saying that the pacing for “Django Unchained” occasionally becomes a hindrance. The thing that kept me looking at the screen for “Pulp Fiction” was the execution of the dialogue between characters, not to mention actions in between. “Django Unchained,” much like “Pulp Fiction,” is a movie that is very cool to look at. It feels exactly how I would want a western-style film to be. But there are one or two points where I am thinking to myself certain scenes can be executed in a slightly different way for the sake of shortening the runtime or some other reason. Who knows? Maybe it’s one of those things that I will learn to appreciate over a second watch, but it’s hard to tell. It’s not like I became angry with the ways certain scenes went down, in fact, there is one scene in particular past the halfway point that goes on for a long time, and the execution there is brilliant. And that’s the thing about Tarantino that I have come to appreciate over the past couple of films I watched. There are a lot of movies out there that I would criticize for having extended scenes that go on forever, with boring dialogue. There are particular long scenes in this that may have dialogue that some directors and writers could probably leave behind. Tarantino however, seems to be the master when it comes to shoehorning in useless scenes. It’s mind-boggling that I as an audience member could be witnessing a moment of the film that is borderline unneeded, but because of what is being said, it feels like a cherry on top of a sundae! 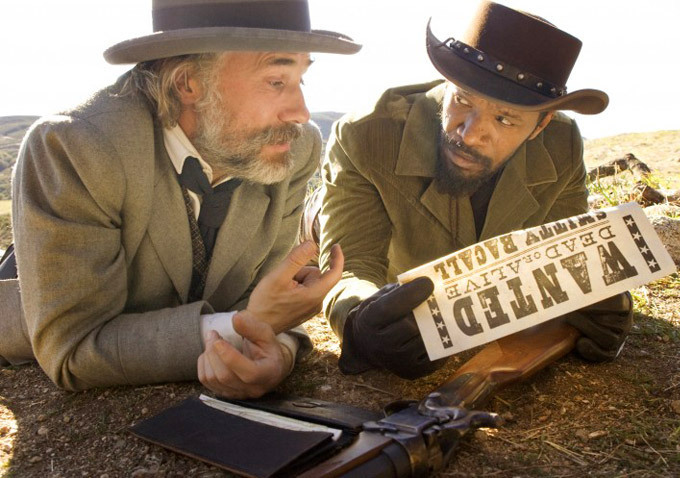 As for the characters in “Django Unchained,” all of them are well written. In fact, there are some cases where I refuse to call them characters and instead call them “A+ dialogue generators.” I really felt for Jamie Foxx’s character of Django at certain points, and there are times where I managed to find him pretty kick-ass. And such kick-assery is established from the very first scene, which is carried through the entire film with ease. And as far as his chemistry with Christoph Waltz goes, it is taken to the point where I cannot even imagine anybody else playing either of their characters.

By the way, I love this scene.

Amerigo Vessepi: Can you spell it?

I dunno, there’s something about that which just randomly screams, “Hey! I kick ass and take names!” And not only do I have to give credit for Jamie Foxx for the way he delivered that line, but I think top credit has to go to Quentin Tarantino, because I imagine he wanted this line specifically in the way which it happens to be presented here. Granted, it is also an Easter egg because this movie was inspired by the 1966 movie “Django,” starring the guy opposite this movie’s “Django” in the conversation above. Specifically, Franco Nero.

Although, even though I said I cannot imagine somebody playing someone else’s character, there’s one exception, but the reasoning for it is kinda crazy. When I read the cast on the Blu-ray case for this movie, I almost thought KERRY Washington said DENZEL Washington, so I cannot currently get him out of my head!

Speaking of things I cannot get out of my head, part of me really wants to see this movie turned into a video game. Why? Because this movie at times is unnecessarily violent, but it is all the better for it. There’s one shootout towards the end in particular that was a giant bloodbath. Said shootout contains a number of satisfying kills, and I would probably would need to rewatch this film, or maybe that scene in particular, but it could end up being in my top 20 favorite action scenes. And it does not take away from any emotion that I had towards the characters, because Django would get himself into a less than satisfying situation that made me admire the other side for how they executed their actions (stylistically), but I was still able to latch onto Django as a character.

I also gotta give credit to the costume and makeup department, especially with the transformation of Samuel L. Jackson. Because in this movie, he does not completely look like Samuel L. Jackson and instead looks more like the stereotype for a retired badass NBA basketball player. Per usual, Jackson is charismatic, plays a well written character, and at this point I’m pretty much repeating myself, I do not see anybody else playing his character. It’s amazing what a little grey hair can do to make a role more convincing.

In the end, “Django Unchained” is a fun ride, and kinda bonkers. Depending on the next movie I watch from Tarantino, he could become my favorite screenwriter of all time, and while this was not as good as “Pulp Fiction,” this manages to have the same Tarantino flair that movie had which I appreciate. This is not to say that “Django Unchained” is a ripoff, but it is just another reason why I happen to admire Tarantino’s directorial choices. He’s edgy, creative, and badass. “Django Unchained” solidifies itself as one of the best films of its year and when it comes to other violent films out there, this makes every other film look like it was made for children. “Django Unchained” kicks ass! I’m going to give “Django Unchained” a 9/10!

Thanks for reading this review! For those of you who want to know my next installment in the Tarantino review series, it is going to be his latest film, specifically 2015’s “The Hateful Eight.” I wanted to see this movie in theaters, but I never got around to it because of competition. Let’s face it, I ended up seeing “The Force Awakens” four times in a matter of two months. Nevertheless, I am very excited, I enjoy a good mystery every once in a while, so hopefully this will be good! As for new releases, I’m still trying my best to get myself to go see “Spider-Man: Far From Home.” I’m wondering if it is gonna be this year’s “Deadpool 2.” It’s a movie that I want to see, one that I am trying extra hard to get myself to see, but for one reason or another, I almost failed to get around to it. We’ll see what happens! Be sure to follow Scene Before with an email or WordPress account so you can stay tuned for more great content! Also, check out my Facebook page! I want to know, did you ever watch “Django Unchained?” What did you think about it? Or, what is your favorite unnecessarily violent film or scene from a film? Let me know down below! Scene Before is your click to the flicks!