“The House with a Clock in Its Walls” is directed Eli Roth (Death Wish, Cabin Fever) and stars Jack Black (Kung Fu Panda, Goosebumps), Cate Blanchett (Thor: Ragnarok, How to Train Your Dragon 2), and Owen Vaccaro (Daddy’s Home, Mother’s Day) as a young orphan named Lewis meets up with his charismatic uncle Jonathan. This uncle happens to be a warlock who lives with an elderly witch by the name of Florence Zimmerman. Together, they are all living in the same house that is said to be haunted. Throughout the movie, Jonathan is trying to get rid of a clock through magic in order to preserve the world.

“The House with a Clock in Its Walls” is one of those films I just didn’t know much about before going to see it. I remember seeing one trailer for it in the movie theater. And in all honesty, the first time I even heard about this was when the film was doing advance screenings. Then again, I live 30 minutes from Boston and Eli Roth, the director behind this film, actually was born around the area. So I don’t know what other areas happened to be doing regarding this film, but I remember getting some alerts for screenings going back as far late August. Although I must say, the screenings were far ahead of when I was alerted of them. The screenings actually happened to be on the week when the movie actually released. Guess Universal didn’t have too much faith in this film. Most of the marketing I saw came towards the time before the movie went into theaters.

I have to say though, despite some apprehension with the marketing, “The House with a Clock in Its Walls” is a fun time! I’d say it’s a decent flick for kids and adults alike. It doesn’t treat people like idiots (for the most part, because it is apparent these days that you can’t have a kids movie without poop jokes). The biggest praises I can give to this movie is the lovable chemistry between the characters. Some highlights include Jack Black and Cate Blanchett, who play off each other calling each other rude names. The gag increasingly dies down as the movie goes on, which is kind of unfortunate considering once I first witnessed this, it was one of the best parts of the movie. 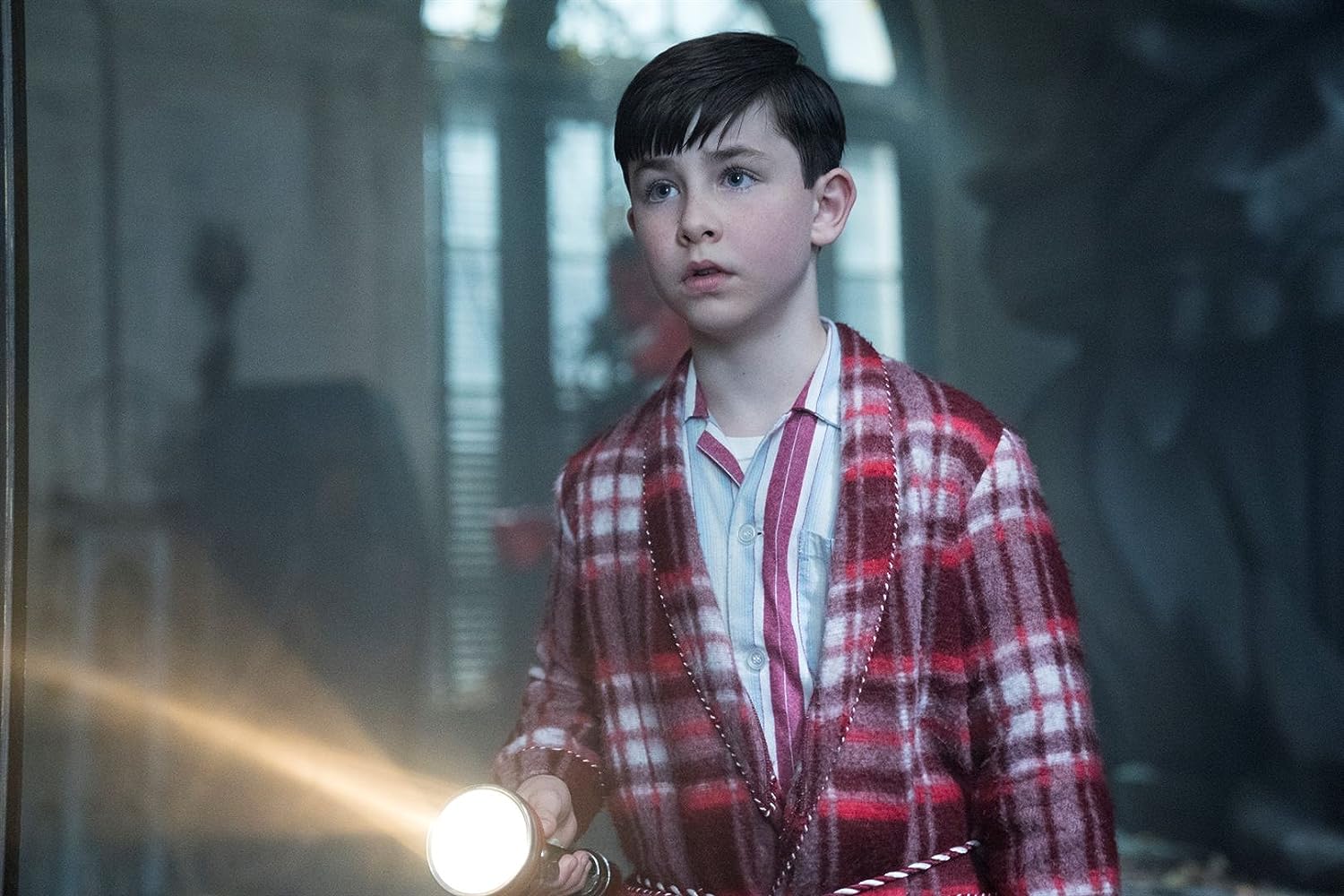 As far as the kid goes in this movie, his name is Owen Vaccaro. I wouldn’t go ahead and call Vaccaro the next great child actor, who is gonna go onto win Oscars one day. I mean, he could, but his name probably wouldn’t be as prominent. It’s not like I’m witnessing another Jacob Tremblay (Room, Wonder) or Macaulay Culkin (Home Alone, My Girl). However, Vaccaro’s performance serves both the character and the movie very well. His character, known by the name of Lewis Barnavalt, is pretty much a wiz. He reminds me of a more humanized version of Mindy Kaling’s character from “A Wrinkle in Time.” I’m not saying he often quotes other people, particularly those who happen to be famous and have perhaps above average intelligence, but he does seem to have some abnormalities to him. He often looks in a dictionary, and I mean that in a way that technically qualifies as a hobby. In fact, what makes this kid weird, is kind of what this movie tries to teach people. It’s similar to other lessons that may have been provided in children’s films before, but it doesn’t mean the film fails on trying to emphasize such a lesson.

While the kid may be weird, the character played by Jack Black is just plain crazy. He almost reminds me of a mad scientist in some ways because he doesn’t seem to believe in the concept of sleep. So in a way, I guess you can say I can relate to this character. The character’s name is Jonathan Barnavalt and he is a warlock. Jack Black is probably my favorite character in the movie, and perhaps the one that kids might want to emulate the most. For one thing, his house has one rule (don’t open a particular cabinet), but other than that, there are literally no rules. He’s enthusiastic, hyperactive, and it adds up to make him rather charming.

As for Cate Blanchett, her character goes by the name of Florence Zimmerman. Out of everyone in the movie, she wasn’t my favorite character. She was pretty close, but Jack Black takes the cake. But the thing is, I literally had no idea I was even witnessing Cate Blanchett in this movie. So out of everyone in the movie, I’d say this character was the most well performed. Maybe it’s because I didn’t really know Cate Blanchett was going to be in this film and I knew Jack Black was. Plus the film reminded me of “Goosebumps,” which also had Jack Black as a character with some similarities to his character in this movie. I’ve seen Cate Blanchett in some films before like “Lord of the Rings,” “Thor: Ragnarok,” and “How to Train Your Dragon 2.” I’m somewhat surprised that I wasn’t really able to discern Cate Blanchett because to me she seems to have one of those voices you can easily pick out. But you also have to consider how Cate Blanchett looks in this movie compared to how she does off screen. Even so, I feel like Cate Blanchett embodied this character well and it just goes to show one actor can truly slip over your head sometimes. I am not saying Cate Blanchett’s performance is gonna get her an Oscar nomination, maybe at best she’ll be recognized for a Saturn Award, but I’m not sure.

But in all reality, what makes this film so interesting to me is the vibe and the spirit of the film itself. This film is in the fantasy genre, and it’s particularly aimed at families. I will have you know that when I was actually at the theater to watch this movie, I was the only customer in attendance. “The House with a Clock in Its Walls” manages to balance humor, story, and character development very effectively. In fact, in some ways, I guess you can also say this is a horror movie as well. One reviewer on YouTube by the name of Chris Stuckmann actually went to see this movie, and somebody told him that children walked out of the theater early because they were scared. When I saw his review, it reminded me of how I studied something scary from a childhood show I watched. I’m not sure what it was, but it was probably from a show on PBS or something. I could understand why some children would walk out. Comparing this film to “Goosebumps” once more, there are some light scares that almost seem like scares that fall into the “playing safe” category, but then there’s one scene that stood out to me as I watched it and almost reminded me of what I “must” have witnessed as a kid. If you like horror, I wouldn’t say to go out of your way and watch this movie. This isn’t like you’re watching “A Quiet Place” or something. But if you want to have fun and escape reality, “The House with a Clock in Its Walls” is for you.

In the end, “The House with a Clock in Its Walls” is a fine fantasy film that probably won’t be remembered throughout time, but it is certainly good for a watch. It’s intriguing, occasionally suspenseful, funny, and perhaps the most effective commercial for the Magic 8-Ball that I’ve seen since maybe “Angels in the Outfield.” Would I buy the movie on Blu-ray? Probably not. If it were used and available for a decent price maybe I’d put my hands on it. However I am proud to say that my recent viewing of this film was not a waste of time. I’m gonna give “The House with a Clock in Its Walls” a 7/10. Thanks for reading this review. Be sure to stay tuned for my review of “Apollo 13,” which will be up on October 11th (hopefully). This will be my last space movie review before I make the trek to see “First Man,” so be sure to check that out. Also, be sure to check out my eventual reviews for “Venom” and “A Star Is Born.” One more thing, I just got back from New York Comic Con, and I’ve got a bit to talk about regarding that, so look forward to my review on that sometime soon! Be sure to follow Scene Before with a WordPress account or email so you can stay tuned for more great content! I want to know, did you see “The House with a Clock in Its Walls?” What did you think about it? Or, given how this film is directed by Eli Roth, what is your favorite film Eli Roth was involved in? Let me know down below! Scene Before is your click to the flicks!