“The Meg” was not really my most anticipated movie of the year, it was not really something I was thinking was going to be all that great, but at the same time, I just couldn’t keep my eyes off of it. Kind of in the same way that geckos can’t keep their eyes off of how 15 minutes can save you 15 percent or more on car insurance. Maybe they don’t know what that means, but at the same time it’s just so hypnotizing and rings a bell in people’s heads. The first trailer of “The Meg,” at least to me, was a thing of beauty. I felt like this was not going to necessarily be the movie that kills all of the other summer movies in terms of likability. Having already seen “Mission: Impossible: Fallout,” this movie has some big shoes to fill. Based on the music and catch phrases that the marketing provided (CHOMP ON THIS), I knew what I was going in for, and I was f*cking ready for it. Let me just tell you all, this movie is what “Sharknado” should have been. OK, well, maybe not, the plots kind of differ, but even so, in a world where we have more “Sharknado” movies than we have “Jaws” movies, “The Meg” is here to chew on every last “Sharknado” possible! 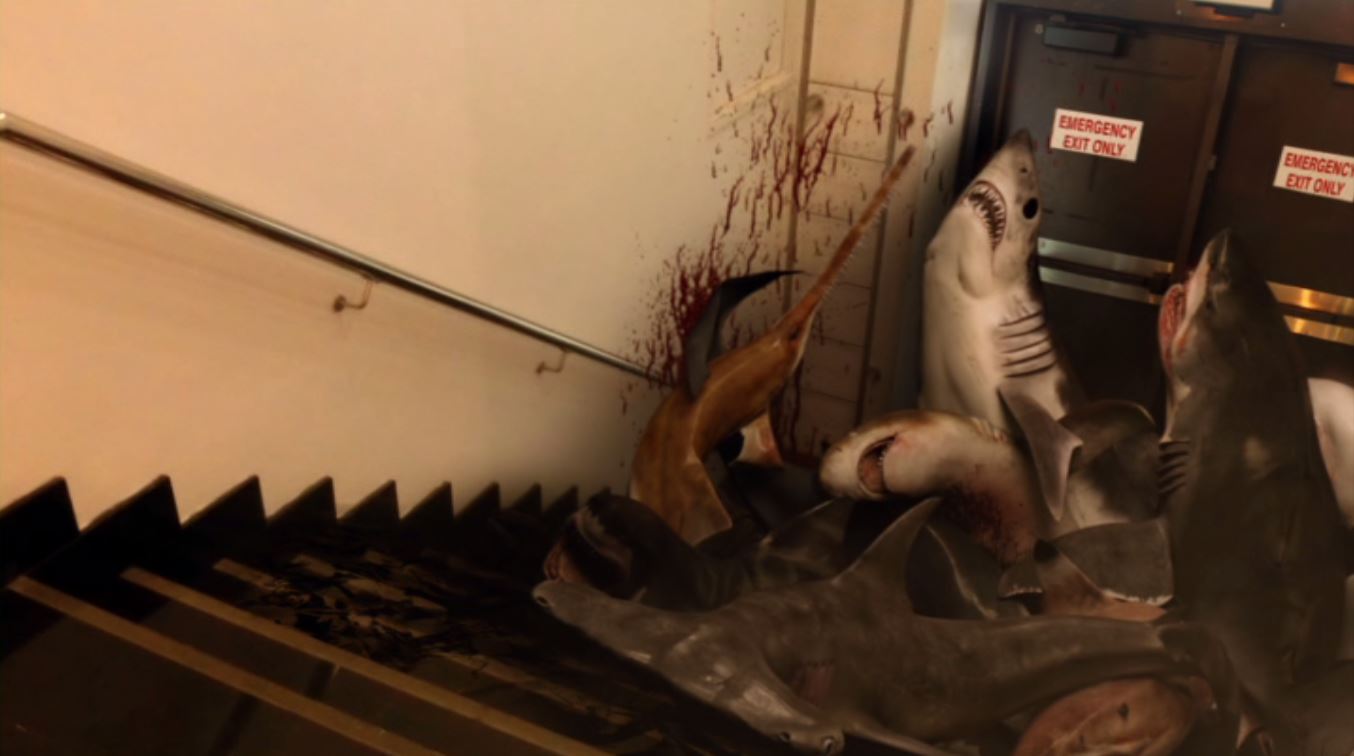 I’ll remind everyone about “Sharknado,” and if you don’t know what “Sharknado” is, consider yourself safe from being trapped by shark Satan. There’s also a good chance you might not be aware that it is well known for being stupid, and in a way that I GUESS entertains people. For me, I just find it horrendous. And even the franchise itself understands what I’m talking about. The previous “Sharknado” installment claims to be the ultimate movie in its lineup. It’s literally called “The Last Sharknado: It’s About Time!” When it comes to “The Meg,” the plot, while still revolving around scope per se, utilizes it and uses it in a way that is technically smaller. “Sharknado” might as well be the “Star Wars” prequel trilogy…

“It’s so dense, every single frame has so many things going on.” -Rick McCallum

…whereas “The Meg” might as well be the “Star Wars” original trilogy, where there’s glory, with a proper purpose.

“The Meg” is a movie revolving around a really big shark, and this does feel like a big movie, and that’s exactly what this movie does very well. Speaking of things it excels at, it manages to have some scares. Nothing groundbreaking, nothing to write home about, but it all works. “The Meg” manages to have the same quality “Jaws” seems to have, which is to effectively combine summertime fun and horror and put it into a nice little package. Now this movie is no masterpiece, so to call it the next “Jaws” is a bit of a stretch, but it certainly does share a redeeming quality that kind of made “Jaws” what it is. Horrific summertime fun.

What “Jaws” has though compared to “The Meg” is compelling characters. The characters in “The Meg” aren’t exactly unlikable, they don’t do anything that makes you want to smash them to bits, but they just aren’t really worth talking about in a greatest characters of all time list. And I say that primarily because while they certainly serve their purpose and are somewhat intriguing, they don’t have enough depth to them. Although then again, some of them are deep underwater in the movie so what do I know?

And when it comes to the background we get related to Jason Statham’s character, there’s not really much I can report. All we really know about him is that apparently he’s crazy. In fact, what do we really know about anyone in this movie? Let’s just say you tied me to a chair and the only way I’d be able to live is if I can explain about at least one character in detail. Chances are that’d be impossible, because I feel like all of these characters lack detail. These are just people that all seem to be stuck in a situation who we as audience members could be getting to know, but in reality, are just scribbled on the script just to move the story along. These characters are seemingly interesting, they’re funny, they have good chemistry for the most part, acting is hit or miss, but they all seem to work well together.

Speaking of good acting, let’s talk about the portrayal of the young girl, Meiyang, played by Shuya Sophia Cai. Let me remind you, this is a child actress. She was born a decade ago, and the first trailer for this movie came out barely before she entered the double digit ages. Her acting level in this movie was probably better than a good number of adults present on the cast list. Either the director worked extra hard with this girl to make her execute the best performance possible, she has excellent mentors who know acting and can teach acting quite well, or maybe pleasing acting to her is something that just comes naturally. I don’t know, but the main point is, this girl can act! Well done to her!

As far as pacing in this movie goes, it almost makes the movie a puzzle in a sense. In the very beginning, it’s all exposition, it’s all introductions, it gets boring after a while, you just start begging for a megalodon to show up out of nowhere. I will admittedly say that maybe the first act of “Skyscraper” may have entertained me more than the first act of “The Meg.” Once you get into the megalodon stuff however, you don’t want to go back. It gets funnier, it gets wilder, it gets stupider in the best possible way. There was also some cringe comedy in there, and I’ll be honest, it flows rather well if you ask me.

One thing I gotta ask myself though is how GOOD this movie actually is. Because I’ll be honest with you, I REALLY enjoyed myself during “The Meg.” Let me just say this IS NOT a 10/10, but it’s also not a 1/10. What I’m trying to figure out on my mind if I like this movie because it’s so stupid it’s fantastic, or if it’s fun, or I’m just putting myself in a particular mindset for a couple of hours. And speaking of time, when I walked out of the theater, I noticed it was around 9:50PM, I went into the movie at 7:45PM, and the actual film started sometime past 7:50PM. When I walked out, this movie felt like it was 10 or 20 minutes shorter than it actually was, and I mean that in a good way. When you consider the boring first act, that almost sounds impractical. But from my perspective, this movie REALLY picks up at around the 30 or 40 minute mark.

Not only is pacing something that doesn’t stay consistent in this movie, but the tone is sometimes off for me. There were a couple times when someone was in danger where I didn’t really care if they got seriously hurt or if they died, whatever. I just didn’t really care for them because this didn’t feel like a character movie for one thing and once again, these people basically have no depth to them. And speaking of that, you know how I mentioned “The Meg” might as well be the superior version of “Sharknado?” With that statement in mind, “The Meg” contains a better story with more competent camerawork, special effects, and writing. I didn’t say everything in this movie was better by a landslide when it comes to “Sharknado.” Characterization needs some work if you ask me.

In the end, “The Meg” is the best kind of stupid movie you could ever ask for. It basically knows what it is, the fun never stops after a certain point, and while there happen to be some clashing tones interfering, this movie is still a good time. I honestly want to get the “The Meg” on Blu-ray when it comes out, because I think this will end up having a positive replay value on my part, so when that movie hits stores, I’ll be on my way. I don’t recommend this movie to everyone. If you are someone who is often called “Shirley” and is very serious, this movie might be one you’d want to avoid. For me, I just had plain fun, and I can’t wait to watch this movie again if I ever get a chance. I’m gonna give “The Meg” a 6/10. I’ll be honest with you. This grade might not even last. It could go up, it could go down, it could stay where it is. But based on everything I said, 6 seems to fit. Thanks for reading this review! Pretty soon I’m going to have my review up for “2001: A Space Odyssey,” which will be the first entry in my space movie reviews in preparation for “First Man.” Speaking of upcoming content, I would like to warn everyone that New York Comic Con is coming up in a couple weeks, and I have tickets for Friday and Sunday so be sure to look out for my thoughts on the con whenever I can get around to posting them. Be sure to follow me here on Scene Before either with a WordPress account or email so you can stay tuned for more great content! I want to know, did you see “The Meg?” What did you think about it? Or, what is your favorite shark movie? I bet all of you are gonna pick “Jaws” so I’ll ask another question. What are your thoughts on “Sharknado?” You can talk about individual movies or the franchise, your choice. Let me know down below! Scene Before is your click to the flicks!