Hey everyone! Jack Drees here! If you know me personally, you’d probably be well aware of my fanaticism for IMAX. I freaking love IMAX. At times, they’re brutal liars (if you don’t trust me, ask Aziz Ansari), but at the same time I can’t help but love them. They’ve partially contributed towards my love of film. I would love to make several movies and release them in the IMAX format, and even on IMAX film. Speaking of that, I got to ask something today in this post.

One movie I’m really looking forward to this year is “First Man.” This movie is being directed by Damien Chazelle (Whiplash, La La Land), stars Ryan Gosling (Blade Runner 2049, Crazy Stupid Love) and Claire Foy (The Crown, Vampire Academy) and is based on the true story (depending on your knowledge or thoughts on various conspiracy theories) of the famous Apollo moon landing from 1969.

A new trailer just released for this movie and I’ll just say to you all right now that I have no intentions to do a review on it. However, there is one thing I caught at the very end of the trailer. One of the last pieces of text the trailer states is “Select Scenes Filmed with IMAX Cameras.” It doesn’t exactly specify what type of IMAX camera is specifically used to shoot the movie, but according to IMDb, the movie is partially being shot on what is referred to as an IMAX MSM 9802. This camera was used to shoot select scenes of various films including “The Dark Knight,” “Mission: Impossible: Ghost Protocol,” and “Star Wars: The Force Awakens.” This is an IMAX camera that is capable of shooting in 2D and 70mm. Therefore, “First Man” is being shot in IMAX 70mm, which makes me ask, “Will you be able to watch this in the IMAX 70mm format?” 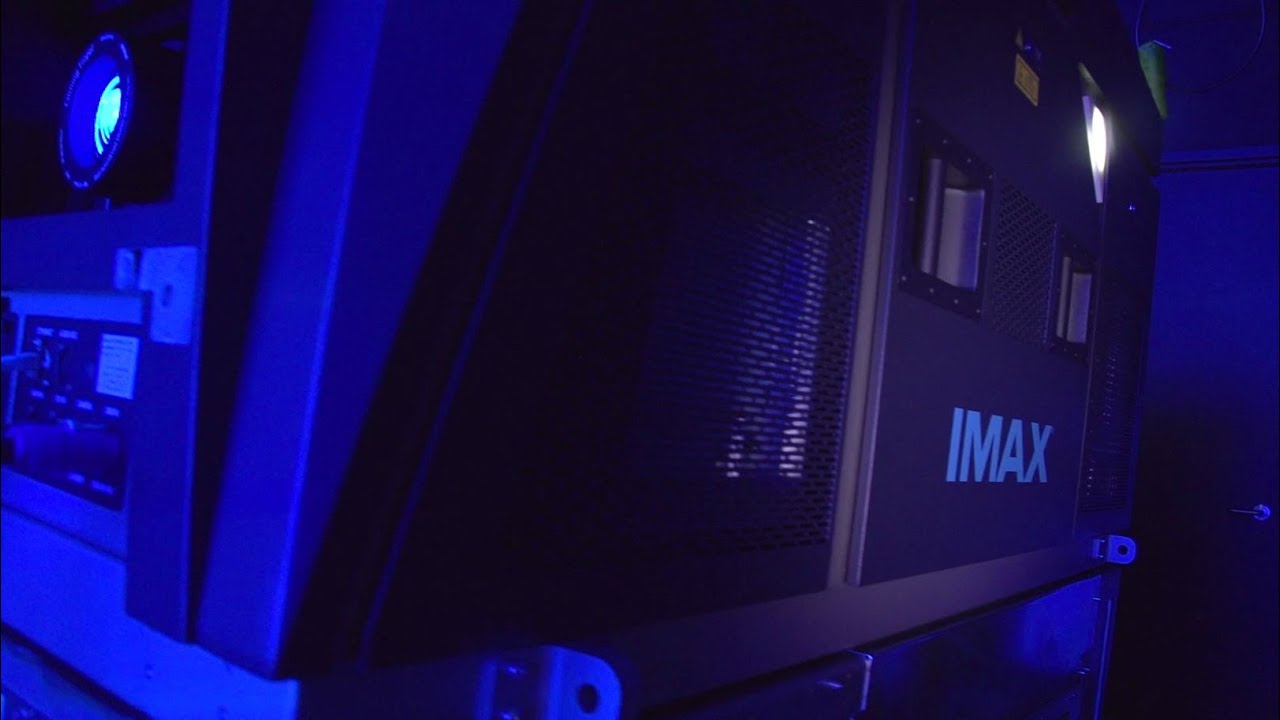 According to IMDb, if you look in the technical specifications page for “First Man,” it’ll say that some scenes will be shown in a 1.43:1 aspect ratio, which is the proper ratio for an IMAX theater with 70mm equipment that covers the entire screen. For those of you who are unfamiliar with IMAX technology, let me just inform you, if the year this movie happened to be coming out is a year such as 2014 and I found this info on IMDb, chances are I’d at most GUARANTEE you that this movie will be shown in the IMAX 70mm format. However, it’s not 2014, it’s 2018, so I can’t make any guarantees at this point. I say that because IMAX has a technology which has been steadily growing, which is their 4K laser projection system (picture up above). They’ve installed it on several screens around the world. Some of these screens include the TCL Chinese Theatre (Los Angeles, CA), Cineworld Leicester Square (London, UK), CGV Yongsan (Seoul, SK), Event Cinemas Queen Street (Auckland, NZ), Scotiabank Toronto (Toronto, Canada), Miramar IMAX (Taipei, Taiwan), and I even have one that’s about a ten minute drive from my house, the Sunbrella IMAX 3D Theater, located inside Jordan’s Furniture, in Reading, MA. I can pretty much guarantee that given today’s technological preferences that at least one laser theater will be showing the movie. I say that because IMAX, like most movie theater owners and operators, typically show their movies in some format related to digital projection. It’s simpler to operate, simpler to handle, and you don’t have to worry about any degradation of picture quality for one reason or another.

The IMAX laser system works on multiple types of IMAX screens, but one of its main purposes is to be a digital equal/replacement for IMAX’s 70mm film projectors. If you ask me, IMAX 70mm projectors are capable of showing clearer images than the company’s laser projectors, but that’s for another time. With that sort of idea in mind, that means if you put an IMAX laser projector in an older IMAX theater that contained a film projector prior to it, there’s a good chance that the laser projector was installed to play media and said media will be displayed in an aspect ratio that would have been shown the same way had IMAX kept their film projector. For those of you who do not know much about IMAX, the laser projection system IS NOT IMAX’s only digital projection system. They’ve had another one which they introduced in 2008, which is pretty much the reason why some people refer to the company as LIEMAX. IMAX has installed many of these all over the world, which started an enormous growth in IMAX theaters in multiplexes. However, the projector couldn’t show any images in the tradtional IMAX aspect ratio and when people watch something say, shot with IMAX cameras, it would be shown in a 1.90:1 aspect ratio. The IMAX laser system by the way, first began rolling six years after the first IMAX digital system was introduced, in December 2014.

In the year of 2018, we have yet to see one major Hollywood release be shown on IMAX film. Yes, “Star Wars: The Last Jedi” was shown in IMAX film this year, but that technically released in 2017. We have yet to get one big film release, I’m not talking about any of those IMAX documentaries, I’m talking about films that most of the public would see advertised on TV, shown in the IMAX 70mm format this year, and I believe there is no other film this year that is more qualified than “First Man.” This movie involves a rocket launch, takes place in space, looks very compelling, and was shot entirely on film, part of it with IMAX cameras.

One big question I have though is this. If this were to be shown on IMAX film, what would our options be for going somewhere to view the movie in that format? Because two major releases in IMAX theaters were shown in IMAX film last year, but one release was much wider than the other. The first release was “Dunkirk,” which was shown in 37 IMAX theaters with 70mm equipment. This included a variety of theaters from giant IMAXes in multiplexes, to museums, to standalone locations. The second release was “Star Wars: The Last Jedi,” which as I state in one of my posts I did in October of last year, the number of theaters this movie happened to be shown in which was playing it in the IMAX 70mm format is less than the number of seasons in “Criminal Minds,” “Grey’s Anatomy,” “Supernatural,” and “NCIS.” If you want to get more specific, the movie was said to be shown in 11 theaters in the IMAX 70mm format. Also, not many of the places which the movie was to be shown appeared to be what one would call a traditional movie theater. Most of these were in museums.

With the upcoming release of “First Man,” I honestly don’t know what will happen when it comes to releasing it. This movie doesn’t come out until October 12, so there is plenty of time for something to be announced when it comes to where this film will be shown. Although with a film like this, I would certainly like to see it shown in more than just a select few IMAX 70mm theaters. If it can’t be as wide as “Dunkirk,” I would at least like it to be close to as wide of a release as “Dunkirk.” Because just like “Dunkirk,” I feel like this is one of those films that is literally made for movie theaters, and in a case like this, IMAX. As an audience member, it is the responsibility of the filmmakers and in a case like this, IMAX, to immerse me into the movie. I’ve experienced a rocket launch in the IMAX format, and I’ll even state, the IMAX 70mm format! A rocket launch is by far one of the most powerful things a man could ever witness. Just a two minute video of a rocket launching would be a great test video for the IMAX experience. Now if that is accompanied by a great story and interesting characters, you have something more nifty on your hands. So IMAX, please give this a wide release in your 15/70mm format, and if you want my preference on where to see it, I want to see it at the Providence Place Cinemas IMAX in Providence, RI. Just… Get crackin’.

If this does not get a wide release in IMAX 70mm, the least I ask is that this gets an IMAX 70mm release in some notable areas having to do with NASA or space exploration. But seriously, if you ask me, the wider the release, the better! So why be good when you can be better? Chop chop, our lives only last so long!

“First Man” is in theaters and IMAX everywhere on October 12th, and it is by far one of my most anticipated movies of the year. If you guys ever think about seeing it, I imagine this would be one hell of a ride in IMAX. Thanks for reading this post! This week I’ll be releasing at least couple of new reviews. I’ve got my review for “Tag” which I pretty much already finished, it just needs to be released once I’m allowed to share it to the public. I will also soon have my review for “Incredibles 2” which comes out later during the week, and if I can manage my time well enough, I might be able to insert my review for “Mission: Impossible: Ghost Protocol.” I just need to watch it from start to finish, gather my thoughts, and then unleash those thoughts to you all. If I don’t have it this week, I’ll probably have it next week because the week after I’ll be on vacation, and I’ll probably still be posting while I’m away if my creative juices are flowing, but there’s a good chance I’ll be watching the movie at home as opposed to a hotel. Stay tuned for more great content! I want to know, if you had to guess how many theaters happened to be releasing “First Man” in IMAX 70mm, what would your guess be? Or, what are your thoughts on the trailer we just got for “First Man?” Let me know down below! Scene Before is your click to the flicks!