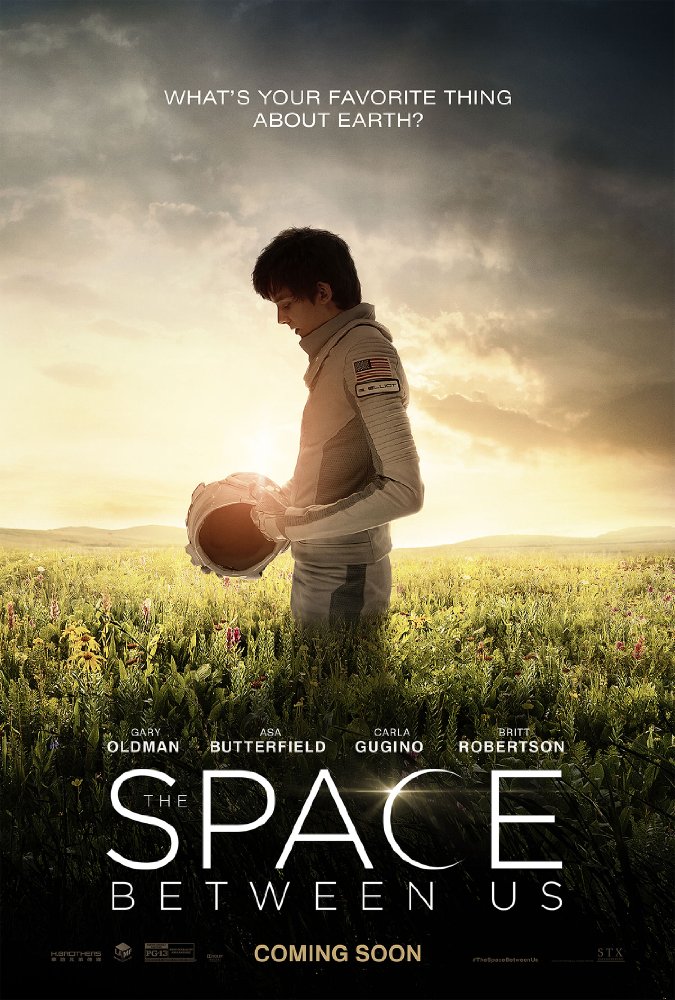 “The Space Between Us” is directed by Peter Chelsom who also directed “Hannah Montana: The Movie” and “Serendipity” and stars Asa Butterfield, Carla Gugino, Gary Oldman, and Britt Robinson. This movie revolves around a guy who was born a Martian, he travels to Earth and hangs with a girl which leads to eventual self-discovery.

I’ve heard about this movie months ago when it released in theaters, but I’m reviewing it now considering I found it for ten bucks at Newbury Comics, which if you’re from New England or Long Island, you’d probably already know they’re a chain of stores whose main focus happens to be products in the realm of nerd culture. Interestingly enough, it’s where I buy a good portion of my movies. I also know someone who saw this movie. If you ever notice the header of my blog, you may notice this blog’s operated by “the #NerdArmy’s film critic.” The Nerd Army is a social media group I’m a part of, and one of my pals in that group, Kayla, saw this movie too. She thought it was horrible, so maybe I wasted ten bucks on a piece of crap. Guess what? Kayla was right! I honestly think “The Space Between Us” might just be up there with movies like “Star Wars Episode I” and “Battlefield Earth” as one of the worst science fiction movies ever made.

On paper, this sounds like a cool concept. You’ve seen movies with Earthlings on Mars like “John Carter,” now we have a Martian on Earth. Now, that has been done before generally speaking, just look at all the alien invasion movies we’ve gotten over the years. And I will say this film does look nice at times. Not as nice as Ridley Scott’s “The Martian,” that’s a whole different ballgame. While I may be praising this film from a cinematography perspective, it’s not perfect, because there are jumpcuts in this film and I have seen films like “Manchester by the Sea” where you might just find one and let it slide. Here however, I found three of them. They were all quickly paced and they aggravated the crap out me! Going back to the concept, if you take out the whole interplanetary idea and have the two main characters on the same planet, you might as well have a love story as cringeworthy as Anakin and Padme’s love story when they’re in “Star Wars Episode II.” Although I will say, the movie’s tone had been set far before the romance.

As mentioned, this movie is about the first person born on Mars, or Asa Butterfield’s character of Gardner, who we will get to. It’s established in the very beginning that one character is pregnant with him. The birth of Gardner is soon shown for us all in order to prepare ourselves for what we’re about to suffer through. And speaking of which, we as an audience aren’t the only folks suffering, because the mother dies. By the way, a pregnant woman has never been in space, so I can’t talk about any scientific inaccuracies there. Also, the mother’s death is not a spoiler because this is less than ten minutes into the film. It’s almost as if the mother dying instantly is a signal for how either this movie will make you want to die or the movie itself feeling like it’s going to die.

Asa Butterfield plays the character of Gardner Elliot, the character isn’t exactly someone I hate, in fact that would be directed towards the next character I’m gonna talk about, but the script makes him look like someone I will be eternally ashamed to hang out with. Granted he’s from Mars, but regardless of wherever the heck he’s from, seeing his character was the equivalent of a mom that tries to sound enthusiastic about something when she’s really not as enthusiastic as she sounds. …Or Tyra Banks when she hosts “America’s Got Talent.” By the way, if anyone from NBC or “America’s Got Talent” is reading this, please replace Tyra Banks in season 13 of the show.

Britt Robinson plays Tulsa and as suggested in the recent paragraph, I don’t like her. Sometimes she’s rather annoyed by Gardner which I can understand because they’re from different planets so they wouldn’t behave identically. However as I got to see more of her character, I became irritated with her for a brief period. I wouldn’t say she’s one of the worst characters of all time, but seriously, she was a nutjob!

Also in this movie you have Gary Oldman, or as I like to call him, Robert Carradine with long hair. I don’t even know if that’s all that good of a comparison, but as I watched the movie I thought that was what he looked like at a point. So Bobby–err I mean Gary plays Nathaniel Shepard. Now Oldman probably gave the best performance out of everyone in the movie, but despite what I said, it doesn’t really make the movie that much better. Because I’ve seen good performances in bad movies, such as Emily Blunt in “The Girl on the Train.” For the record, that performance was better than this one, how much better you ask? Well that one would have probably been nominated for a Golden Globe or an Oscar in my book had the movie been better! Oldman’s performance is alright, but there’s not much of anything all that redeeming about it.

Now the love story could definitely be worse. This isn’t like, love at first sight, the movie seemed to establish that the two grew a connection between each other. But the way the movie in general plays out when the love story builds is that it goes from random conversations on videochat to the point when the character of Gardner Elliot travels to Earth making the movie develop a fish out of water story. There was a movie that released this year that actually came out after this one, that being “Wonder Woman.” The fish out of water cliche worked in “Wonder Woman,” but it didn’t work in “The Space Between Us.” In this movie, the fish out of water segment was just awkward, it made me engage in untypical body movements, so based on that you can tell it was just plain awful. There are also moments when I can easily tell it’s supposed to be funny, and maybe it got some chuckles in theater auditoriums, but I watched this movie alone in my room, the only laughs that are going off in here are… actually none. I have not much else to say there. And when we get to a moment when the love takes full effect, guess what happens? Cheesy dialogue! WHO SAYS THE STUFF THAT IS SAID IN THIS MOVIE?! Granted, I’ve never been in love nor have I gone out with anyone with the exception of a prom night, but in real life, this isn’t how people talk! For the record, the guy from Mars is actually saying this mumbo jumbo, but it’s still cringeworthy as hell! I said part of this before, but I’ll say it again! When it comes to the Earthling, I hated her. She reminded me of that teenage girl from “Independence Day: Resurgence” who I actually recall more than a good number of the characters from that movie. Annoying, angry, and unfriendly. This was just a relationship that was just hard to watch, and when the love is in the air, you can’t just help but think about putting a gun in your mouth.

In the end, “The Space Between Us” is simply a movie I’d never want to watch again unless I was being paid. My friend Kayla wasn’t lying after she saw this movie, this really was a meteor that was about to destroy a planet. This movie was originally scheduled to come out December 16, 2016, which is the same day that “Rogue One: A Star Wars Story” came out, although STX pushed it back to February 3, 2017. While it may be good for STX because they didn’t have to compete with a much bigger film, it might just be bad for the viewing public because this probably increased chances of people suffering. By the way, when I said this movie didn’t have to compete with a much bigger film I might as well be lying to you because it competed against “Rings,” which made over thirteen million dollars in the United States as opposed to this movie which made over three million dollars in the United States. Granted the ratings for “Rings” on IMDb at least are lower than “The Space Between Us,” but it doesn’t change the fact that this was pure s*it. I’m gonna give “The Space Between Us” a 1/10. As an idea, this movie sounded cool in ways, but so did “The Girl on the Train.” My next mission is to find a t-shirt that says I survived “The Space Between Us.” One last thing is that there’s an alternate ending to this film. I was watching the Blu-Ray and it was in the bonus features. I’d probably have to watch the original ending again to compare completely, but for now I gotta say the alternate ending’s better. Thanks for reading this review. On the subject of sci-fi, I am planning to see “Blade Runner 2049” sometime soon, I think that’ll be, without argument, a better movie than this crap. Also, if you are currently in a “Blade Runner” frenzy, be sure to check out a post where I talk about what “Blade Runner” has gotten right about the future ahead of its release. Stay tuned for more reviews, and also, I have a couple questions, what is your favorite movie involving Mars? Or, what is the worst science fiction film you’ve ever seen? Answer those questions in the comments! Scene Before is your click to the flicks!

WHAT “BLADE RUNNER” GOT RIGHT ABOUT THE FUTURE: https://scenebefore.wordpress.com/2017/10/06/what-blade-runner-got-right-about-the-future/