Hey everyone, Jack Drees here. I don’t have any kids, but if I had kids and happened to live in California, I think I just found a new place I would never ever want to take them. I love going to the cinema, to me, it’s a home away from home. Now, a Mexican cinema chain is making a so called innovation. This chain is known as Cinepolis, and their idea towards innovating is opening theaters that contain jungle gyms. Here’s my response to that. Are you f*cking kidding me?! 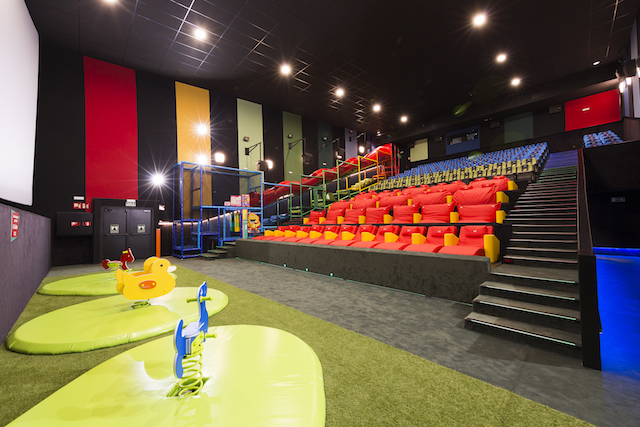 I thought excessively renovating theaters to put in reclined seating was absurd, this puts the word “absurd” in a whole new dimension I never even imagined. Apparently, there are locations set to open in southern California, and there are actually locations of this kind open in Spain, Mexico, Guatemala, and Costa Rica. From that, I can only imagine there are days when parents from these countries have huge headaches because of places like this. When the locations in southern California opens, southern Californian parents will probably feel the same way.

You know how in a lot of movie theaters they have those warnings before the show begins to shut off your phones and be quiet? This actually may encourage talking throughout a movie. Granted, kids aren’t the quietest folks in the world, and sometimes their behavior in a movie theater can show that. But just imagine kids going “WEEEEE!” down a slide while a movie is playing, that would actually be worse. For what I can imagine, only kids movies would play in here. So anything PG-13 or higher won’t be playing in an auditorium like this. You know what I would imagine as well? With the jungle gym inside, the kids are going to be around there for a portion of the feature presentation and parents who probably dislike films such as animations will have to put up with whatever’s on screen without the kid by their side. Also, this goes for kids as well, but I think parents will be more annoyed by this, with all the noise kids will be making in the jungle gym, it’s quite possible it will be a lot harder to hear the movie. If the sound system is excellent, that’s something I’d appreciate at any age, but if not, I’d just roll my eyes and probably just want to leave.

One common bane of every parent’s existence from what I heard, happens to be Chuck E Cheese. I have been there multiple times as a kid. If you don’t know, they are a popular spot for children’s events or birthday parties, they have an arcade, and they also have a jungle gym. I haven’t been in years, especially when you consider the fact that I’m 17. As far as complaints go there, I heard the food is terrible, and there’s not really much for a parent to appreciate about the place. For what I remember, the only times I recall having any food there is during birthday parties, I don’t remember their food being the worst thing I’ve ever eaten. Then again, every single time I have been was when I was at a single digit age and when it comes to food like pizza, I didn’t really think much about quality. Let me just say, this movie theater/jungle gym idea, at least to me, IS WORSE.

A lot of people enjoy going to the cinema. Granted there are lots of people who would rather stay home and rent a movie On Demand, but still, there are people who still go to the cinema. There are also a lot of people who find amusement in going to arcades. Chuck E Cheese is partially an arcade, and even if I went in as an adult, I’d have fun in that sort of way. Sure, it might be awkward, but still fun. With that being said, the problem I have with the jungle gym movie theater idea is that the movie will be playing in a room with a jungle gym inside. If there were, I don’t know, say a jungle gym in the lobby that kids could play around, I’d accept that. That idea would cause less of a disturbance, give kids something to do before a movie starts if they arrive at the theater early, and make the cinematic experience quite possibly less awkward for parents.

Also, let’s take the price in mind. I first heard about this entire jungle gym movie theater thing in an article from LAist. It mentions that the price will be $3 more than a standard movie ticket. So while children may be happy, adults are paying $3 extra per ticket just to enter hell for a couple of hours. Even if you are one of those people who hates 3D, you’d probably rather pay a few extra bucks to see a 3D film than this because at least something like that would focus on the film itself. This is just Chuck E Cheese in a movie theater. By the way, I mentioned an article at the beginning, if you want to look at it, I have the link right here.

Just…Wow. When it comes to movie theater innovations I find ridiculous, I thought the overuse of recliners was bad enough. The jungle gym movie theater may just take the recliners, and put them in a junkyard with a slide, merry go round, beanbags, and unmovable pogo sticks. I don’t believe what I’m seeing here. Well, at least I don’t live in California so that takes some worries off my chest. First off, today is March 8th, or as some people may call it, International Women’s Day, so happy International Women’s Day to all the women out there! Second, for upcoming reviews, I currently have nothing planned this upcoming weekend. If I were to see something, it would either be “Kong: Skull Island,” “Fist Fight,” or “Moonlight.” I’m also thinking of seeing “Get Out” after all of the positive reception I’ve collected about it, but that shall probably remain a mystery for now since horror movies aren’t my go to genre. I don’t mind watching them, they just aren’t my first choice, not to mention, I don’t think they are the first choice of certain folks I know either. Nevertheless, if I post a review over the next weekend, please stay tuned. Also, stay tuned for posts that aren’t reviews. (Sigh) Please just tell me this jungle gym s*it isn’t gonna spread far. Anyway, Scene Before is your click to the flicks!