Hey everyone, Jack Drees here! Apologies for the slight delay on this review. My goal of this space movie review series is to do one new post in the series every Thursday. Although work (and fun) have gotten in the way, so you’re getting this on a Friday and for that, I apologize. Right now, “First Man” is in theaters everywhere, and I do have plans to review it (as long as I can get my “A Star Is Born” review up first). For those of you who are curious to know what “First Man” is about, it revolves around the moon landing and how Neil Armstrong and his family cope with the enormous difficulties of the Apollo 11 mission. Funny enough, that is not the only movie involving the moon landing I’ll be talking about this year. Another one goes by the name “Apollo 13.” Without further ado, let’s dive into the review!

“Apollo 13” is directed by Ron Howard and stars Tom Hanks (Big, Forrest Gump), Bill Paxton (Weird Science, Aliens), and Kevin Bacon (Footloose, Friday the 13th) as the trio of astronauts who go on a mission associated with the movie’s title. This is the seventh manned mission of Apollo and the third which involves an attempt to land on the moon. Based on true events, the three astronauts are onboard a ship which eventually faces damage, thus making the journey back home more difficult. It is up to NASA to help strategize a plan to get the trio back to Earth.

When it comes to the Apollo missions, the one that we mainly still talk about to this day is Apollo 11, which is getting covered in the upcoming movie, “First Man.” However another mission that got covered a while back, specifically 1995, in movie form was Apollo 13. As far as this movie goes for me. I first watched it in 2014 in a science class during eighth grade. I enjoyed the movie and thought it was a very compelling mission. I appreciated the space scenes, the music, and the launch sequence. Having watched it now, I’d probably say I MIGHT like it less than I did back then, but I still enjoyed it. In fact, now that I’m older, I feel like I paid a bit more attention to the dialogue, which probably felt a tad more compelling than it did when I was 14 years old.

When it comes to the music, this honestly feels like some of the most patriotic music I’ve ever heard in a movie. The main theme almost reminds me of a theme that used to be on CBS Evening News until getting rid of it in 2016. And I’ll be honest, that’s probably where this movie excels more than anywhere else. The music basically does the talking. It reminds you to pay attention. It sometimes give you a feeling that you need to silence yourself. At times it is almost eerie. When I watched this movie, one piece that can be heard almost reminded me of some of the last music you hear before the credits in “The Hobbit: The Desolation of Smaug.” Looking at this movie now, I can totally see why they decided to put this music in, and it does symbolize how this mission is not just for the world to see, but just like the groundbreaking Apollo 11, it was for the United States to see.

Let’s talk about some of the performances in this film. I mean, you do have star power from folks like Tom Hanks, Bill Paxton, and Kevin Bacon, but in reality their individual performances do not really make the film what it is. As a matter of fact, it’s their chemistry. It’s how they get along as a team and how they cooperate with each other in space. These three look like they get along with each other, they look like buds, and they also look like they are actually trying to help each other in a time of need. But I’ll be honest, the performance I’ll probably forever credit is Ed Harris (The Abyss, Jacknife) as Gene Kranz.

Gene Kranz is a guy who I occasionally still hear about today. He was part of the documentary “Mission Control: The Unsung Heroes of Apollo,” which I have reviewed on here. I have a friend who works for NASA who has met this fine gentleman. And I will say that my friend has also brought up his name every once in a while. When it comes to his portrayal in “Apollo 13,” my gosh. I f*cking loved it. Ed Harris literally knocked it out of the park when it comes to not only talking, but believe it or not, remaining silent. One thing I often think about when it comes to talented actors who go on to get nominated for Oscars is how they have that one moment where they just talk. The talking seems to stick out to a point where it stays in your head. It’s very compelling. But as I’ve learned from another movie this year, “Won’t You Be My Neighbor?,” silence is a great gift. There is a moment in this movie, specifically towards the end, where we see Ed Harris say no words. If you have not seen this movie and decide to check it out one day, be sure to look out for that. By the way, Ed Harris was nominated an Academy Award for this performance and lost to Kevin SPACEYYYYOW! Gross! Get that away! Get out! Get out!

Speaking of mission control, the set for mission control was very well done. It felt rugged, the colors seem to be accurate, and the computers just scream like they are from the time frame which this movie takes place. Also, as far as your NASA employees go, they seem to fit the time frame as well. Nerdy, white males who could have potentially gotten kick me signs on their backs or atomic wedgies when they were in school. And to add a little extra nerdiness to the mix, I even noticed pocket protectors. As I was watching the movie I was just saying to myself that everyone resembled Lewis or Gilbert from “Revenge of the Nerds.” And now that I think about it, maybe George McFly from “Back to the Future.” Costume design and casting was very well done here.

One thing I do find interesting about this movie though is the PG rating. If this movie came out today it would probably be PG-13. I find it really interesting to see that a movie  with as much smoking and language as it has actually managed to get a PG rating. Then again, according to Wikipedia, smoking wasn’t really as big of a problem until 2007. It almost reminds me of “Back to the Future” which got a PG even though it has multiple utterances of the word s*it and some other vulgar language that parents wouldn’t want their kids to hear. I’ll say though for “Back to the Future,” PG-13 was a new concept back when it came out. When “Apollo 13” arrived it actually was a thing for a decade. 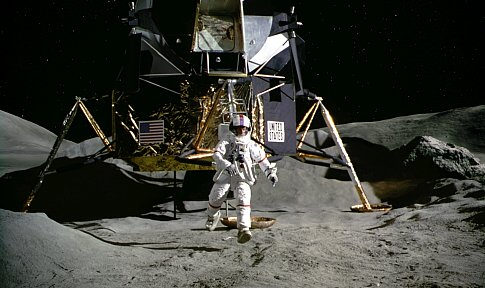 One of my favorite scenes of the movie, despite how Apollo 13 was a mission where the astronauts attempted to go to the moon and never made it, involves being on the moon. We cut to a scene where Tom Hanks’s character, Jim Lovell, is actually getting off a craft and envisioning himself walking on the moon. It’s almost sad looking at that. In a lot of movies, I imagine some people saying that they care about historical accuracy, and I’m with those people. Here though, I don’t want to know if Jim Lovell actually envisioned that. If that vision was fabricated, I don’t give a flying f*ck. That actually enhances the movie in so many ways. And in a way, it almost shows how dreams can slip away from you. Many boys dream of being an astronaut. Sorry, kid, lower your expectations.

That’s a tradition in this series, so I might as well keep it going!

In the end, I don’t really have much to say about “Apollo 13,” but what I do have to say is that it is a watchable, enjoyable space flick based on a great story. “Apollo 13” is directed by Ron Howard, who also directed “Solo: A Star Wars Story,” which I suffered through this year. To those who must know, this movie truly showcases the talent of Ron Howard. Leave “Solo” in the dust! Overall, I think “Apollo 13” is a good movie, and I would say while it is the worst of the films I tackled in this review series, it is certainly worth watching. I’m going to give “Apollo 13” a 7/10. Thanks for reading this review! I hope you enjoyed this space movie review series, apologies for the delay once again. But at least I was able to get this out. Stay tuned for my review of “First Man.” I don’t think that’ll be up right away, but given how I am seemingly seeing it on Sunday, I’ll have my thoughts on it probably sometime next week. Be sure to follow me on Scene Before either through an email or WordPress account that way you can stay tuned for more great content! I want to know, did you see “Apollo 13?” What did you think about it? Or, what is a dream you had as a kid that never became a reality? Let me know down below! Scene Before is your click to the flicks!