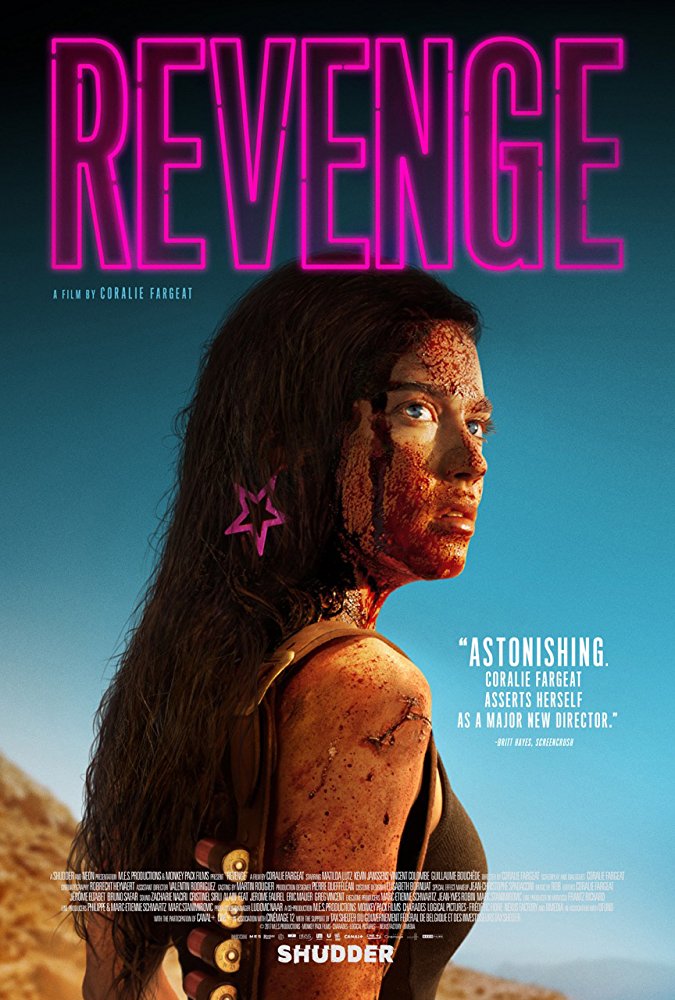 “Revenge” is written and directed by Coralie Fargeat and stars Matilda Anna Ingrid Lutz (Rings, Fuoriclasse), Kevin Janssens (Vermist, Quiz Me Quick), Vincent Colombe (Point Blank, My King), and Guillaume Bouchède (Two Is a Family, Coluche I’histoire d’un mec). This film is about a girl named Jen and she is in a secret relationship with a French millionaire who goes by the name of Richard. When meeting with the millionaire’s pals prior to a hunting trip, Jen is eventually raped and left for dead in a desert. 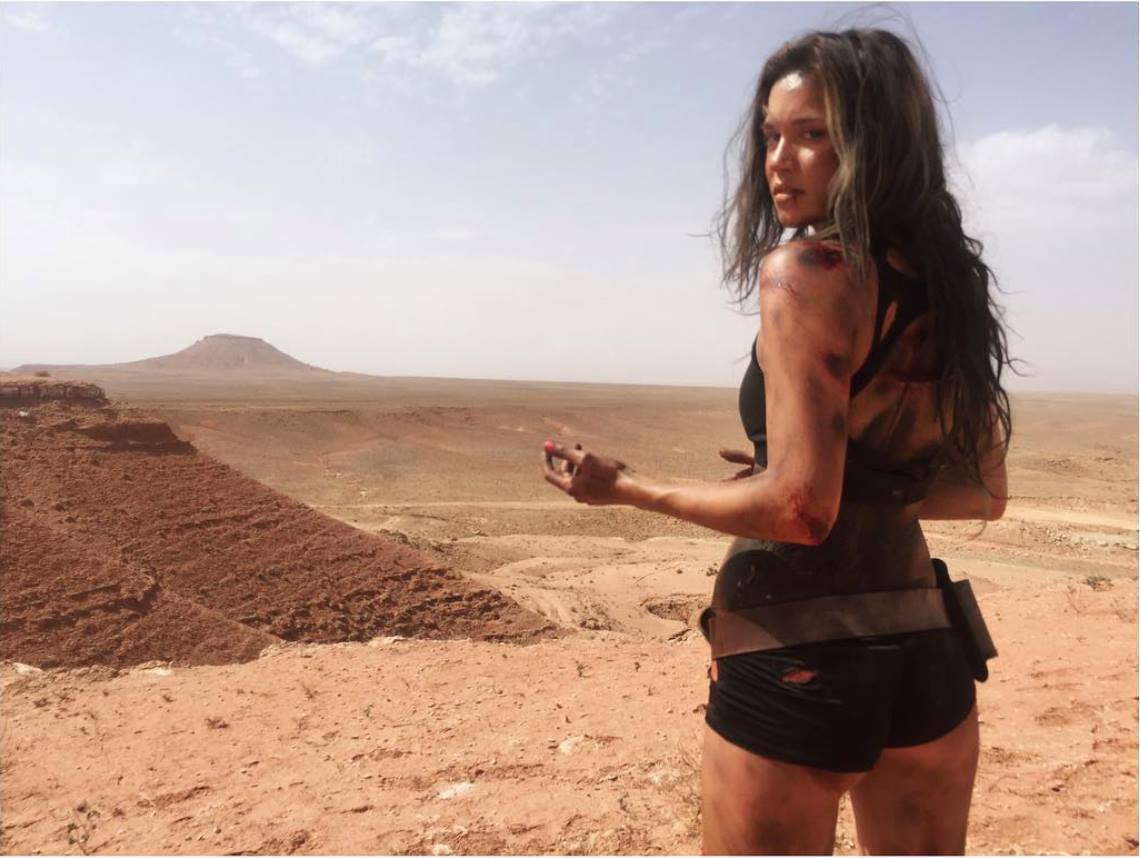 I first heard about this movie and kind of got a grasp as to what it is all about courtesy of another movie reviewer I follow on a very consistent basis, although he’s not on WordPress and instead he is on YouTube, Chris Stuckmann. He did a review for “Revenge” last month and he had some positive things to say about it. So that made me more interested in checking this movie out. I didn’t check it out right away because I was preoccupied with other movies and making other content for you all to read. Also, I will admit, maybe I was lazy. I had some time to myself, but I felt that I should waste my time doing other things such as going on YouTube, watching newer and older videos. So, you can blame me for not having this review up earlier. That and I was working on another post that literally interrupted my viewing of the film, making me pause it. The only reason why I did it, if you don’t know what I’m talking about is because I got invited to a screening of “Tag,” and this happened to be my first ever time where I accepted an invite to a screening such as this (movie comes out over a week after I see it). Despite all of the clutter, here I am making this review!

To start off my thoughts on this official review, let me just say that when it comes to rating this movie, it’s almost on the difficult side because much like the last movie I reviewed, “Solo: A Star Wars Story,” there were a lot of positives and negatives, but both sides of the spectrum kind of stood out like a t-rex going to the mall. Fortunately, this movie is better than “Solo: A Star Wars Story,” and I’d say I had a much more enjoyable experience watching this than I did watching “Solo.” And that really says something because I went to see “Solo” in a giant IMAX on opening night. When it comes to my experience of watching “Revenge,” I stayed away from the theater on this one. Because while it did release in theaters, I couldn’t really see it there because there were no times available. However, on the bright side, the movie released simultaneously on VOD services. I personally chose to watch the movie on Amazon because I had a gift card that I could use for this sort of circumstance. Over the couple of sittings I’ve had to watch this, I felt somewhat entertained, I really think some great ideas were executed very well, and there are a few complaints that I have.

To start off my complaints, this movie in terms of pacing, when it started, was very effective. I was rather engaged in terms of what was happening. It wasn’t too fast, not too slow, it felt just right. However, once we get further down the road, it doesn’t exactly crash and burn, but it doesn’t really stick the landing either. There are a couple times where the movie just slows down just a tad and while it’s not quite a disaster, it’s a setback compared to what was shown in the movie prior to it.

My next complaint is that while you might have a number of these movies out right now, this is just one of those movies that you can’t take too seriously. My problem is that my brain is very logic-oriented, so at times I was unable to handle or process some of what I saw on screen. Once the movie progressed and I saw more of what happened, my thought process sort of changed. But seriously, if you don’t take a lot of things with a grain of salt, you’re in for the exact opposite of a thrill ride. And I know I just mentioned this has to do with logic and taking things with a grain of salt in the same paragraph, bear in mind that this has nothing to do with jokes. As far as I recall, there’s not really that much in terms of offensive jokes or language. There is foul language, but not really that many words that a select number of individuals would find offensive.

And speaking of things that you might find offensive, this movie is not exactly the cleanest in terms of overall content. As mentioned, there is a rape scene, which is kind of what causes the movie’s main events. The movie has a ton of blood, so much in fact that according to the movie’s trivia page on IMDb, the prop team would often run out of fake blood. One of the biggest standouts for me in the movie is one point where there is blood dripping on the ground, and an ant is trying to avoid it. The sound effects in that scene are awesome. There are a couple scenes I’ll mention, where objects stick in bodies, and it’s almost like these people are getting killed. One scene especially just about a half an hour in, but these people, as you would know if you watch the movie, are completely OK. Kinda crazy if you ask me.

One other small complaint I have is during the rape scene, one character in particular, Dimitri walks in during the action, and the rape comes to a stop. Stan, the raper, is basically warning Dimitri that he’s busy and Dimitri can only come closer if “he wants some.” When Dimitri walks in, he’s having a snack, and things kind of get awkward in the room, mainly for Dimitri. He takes a bite of his snack before walking out, and while doing that, we get this extreme close-up of Dimitri taking a bite, accompanied by slo-mo and wacky sound effects. Now I recently mentioned that there’s a scene where blood is falling on the ground and an ant is trying to avoid it. In that scene, the sound effects are very exaggerated. And with those exaggerated sound effects, they kind of enhance the scene and make it more hypnotizing. However with this part of the movie, I found it to be kind of cringeworthy. Maybe it was supposed to make the atmosphere feel uneasy, but in the end, it just felt odd.

Let’s talk about the main character of this film, Jen. She starts in this film in one way, and as you see the film progress throughout its runtime, you’d notice she makes a massive transition. Once you first see her, she’s this “babe.” It’s like I was looking at a Bond girl or one of the chicks from the Michael Bay “Transformers” movies if they decided to party more. The first instance of seeing her in this movie, she’s got shades on, she’s licking a lollipop, it’s like she’s going to a Hollywood premiere at the El Capitan Theatre for an hour and thirty minute porno. She’s at first displayed like a party girl who always spends her nights at the club. As we get half an hour into the runtime, we notice she becomes a bit more warrior-like and also less sexy. She all of sudden turns into Furiosa in “Mad Max: Fury Road.” The transition doesn’t feel like I couldn’t suspend my disbelief to a high enough level, which is good considering some other recently mentioned complaints I have regarding the movie itself. 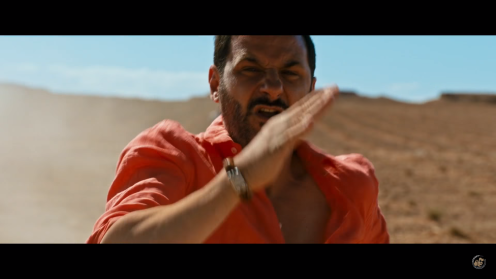 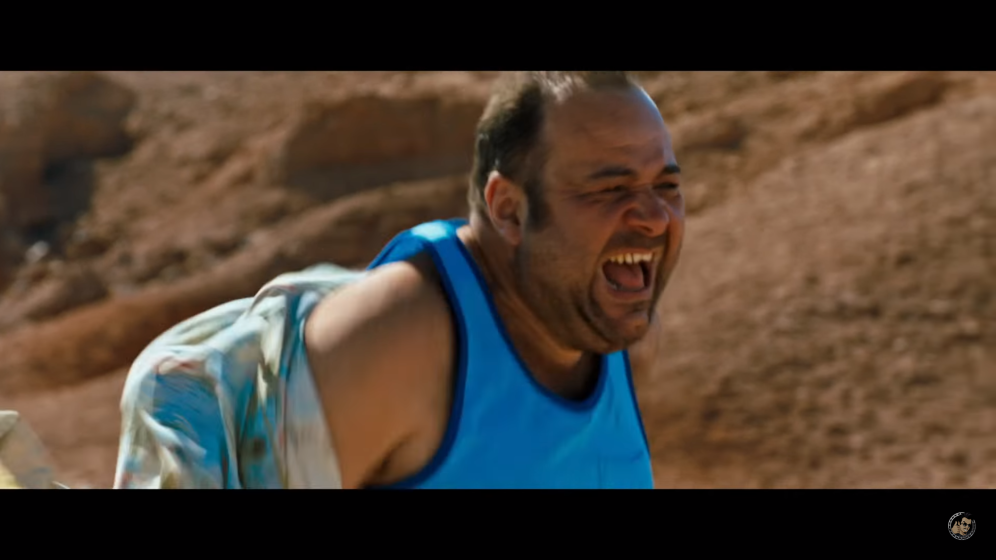 The film also revolves around three men. One of which is Richard, the French millionaire. The other two are Stan and Dimitri, who are both friends with Richard. Stan is the one who rapes Jen, and Dimitri, while not technically useless, has the lowest form of purpose of even being in the picture. Could the picture do without him? Maybe, but personally, if the picture didn’t have him, it probably wouldn’t be as interesting as it is now. These men start out somewhat normal but as you see the picture progress, you grow to hate them. And I don’t mean that in a too terrible way. The film kind of wants you to hate them, and in that way, I’d say that the movie did a good job of making these characters interesting to watch while simultaneously unlikable.

In the end, I wouldn’t say “Revenge” is the best film of 2018, in fact some might say it’s a 2017 film because it was shown at 2017 festivals. However, the film does have its own strengths. I think the casting’s really good, especially for Jen. Some of the cinematography and sound effects really shine. There’s a duel during the climax that is probably one of, if not the most engaging part of the film. If you do want to check out “Revenge,” I will say though, do so with caution, because this film goes for whatever dark thought or image your mind would have trouble processing. I’m going to give “Revenge” a 7/10. Thanks for reading this review! This Tuesday, I’m heading to one of my local theaters to see an early screening of “Tag,” so stay tuned for that review coming soon! Also I just saw “2001: A Space Odyssey” in 70mm earlier today during the afternoon, which by the way, might be the one way I’ll ever watch it again after today. If you have read a couple of my recent posts, I stated the idea of me doing a review for “2001: A Space Odyssey” IF I WENT to see it in 70mm, or in the case of my most recent post, just doing a review because I WENT to see the film in 70mm. Having seen the film now, I will say that before I actually went to see it, I started my review, but since I walked out of the auditorium, I reflected on what an epic, crowd-pleasing, one of a kind experience I had. I’m almost conflicted if I want to talk about the experience, do a review, combine those two things, give my thoughts and interpretation. I literally don’t know what I should do!

So… Let me just say… Before I open the pod bay doors, I will say that FOR NOW, something might be coming. Unless something “2001” related is coming in my next post, which I don’t think will be the case, I can’t say for sure, you might hear an update from me on something in that sort of realm. Stay tuned for whatever comes, and also be sure to stick around on the Internet to see more of my latest and greatest content! So I want to know, did you watch “Revenge?” What did you think about it? Or, what is the one movie that will make you want to close your eyes or look away more than any other? Let me know down below! Scene Before is your click to the flicks!